“We are Costa. We are Italy's Finest ”. This sentence heads an image brochure for the Italian cruise company Costa Crociere SpA. a. Since 1948 Costa ships with the characteristic blue "C" on the yellow chimneys have been sailing the oceans. Well over a million passengers book a trip on board the current 15 cruise ships every year.

It all began more than 160 years ago. Founded in 1854 Giacomo Costa was Andrea a trade in fabrics and olive oil. Foreign markets were opened up after a short time. The question of transport capacities in the form of ships soon arose for the flourishing company. They were rented first; in 1924 left the company with the Ravenna build your first ship. By the late 1940s, Costa owned eight ships. The tonnage was, however, vanishingly small compared to Costa's current ship units with a total of 27.534 tons. 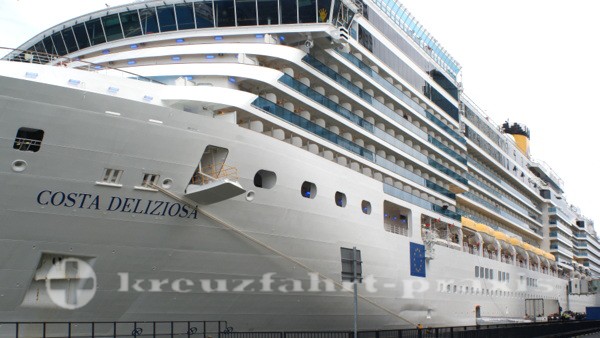 Costa Deliziosa in the port of Amsterdam

Since many Italian passenger ships were lost during the Second World War and at the same time a stream of emigrants overseas began after the war, the Costa family decided to invest in passenger ships. The ships built in the following years were mainly used in North and South America. Starting in 1952, free shipping capacities were used for trips in the Mediterranean region during times of low traffic. 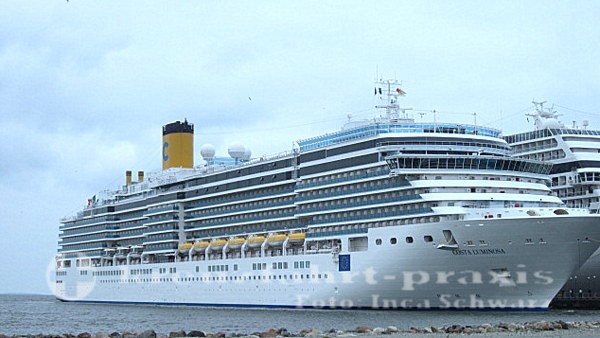 Costa Luminosa in the port of Tallinn

Consequently, in 1959, the Franca C. built. It was still divided into three classes of ship. This ship is designed exclusively for cruises of 7 and 14 days in North America and the Caribbean. With the commissioning of the Eugenio C. in 1964 "class thinking" was given up on board. Instead of three classes of ship, there was only one deck accessible to all passengers. 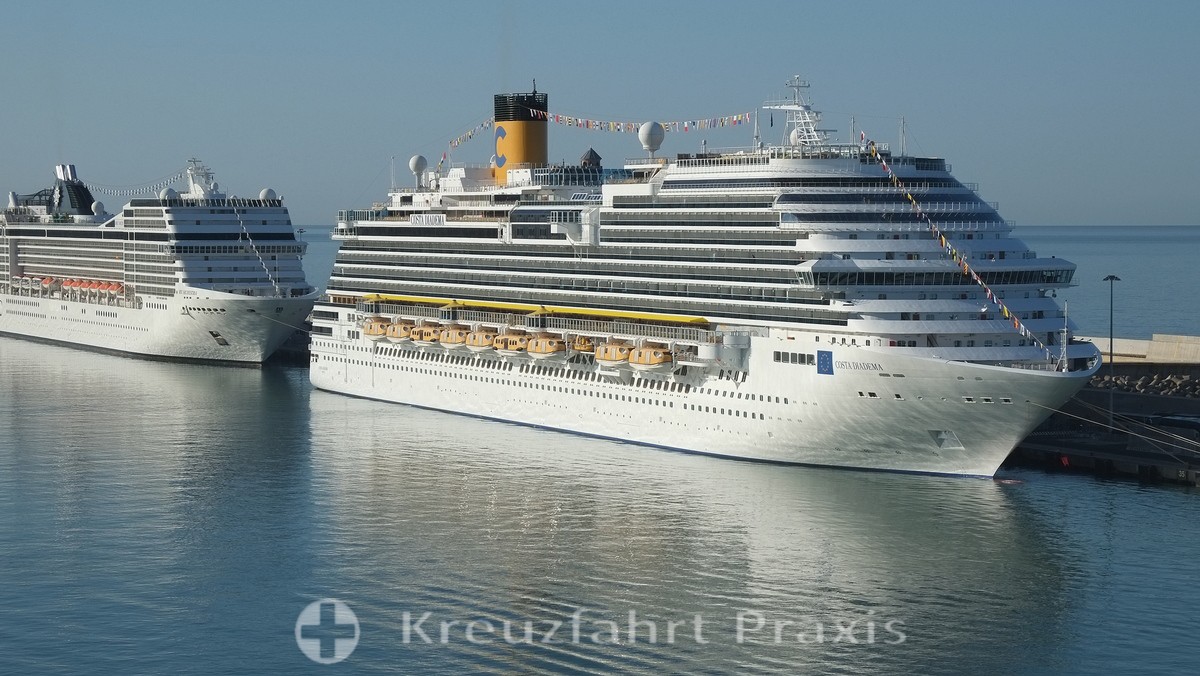 In 1986 the shipping activities became a joint stock company under the designation Costa Crociere SpA. bundled. The company went public in 1989. In the following years, several cruise ships were built. However, with increasing expansion, the company was no longer able to cope with investments. The shipping company was therefore in 1997 to 50 percent each Carnival and the British Airtours sold. Three years later, the Carnival Corporation took over the Airtours stake. 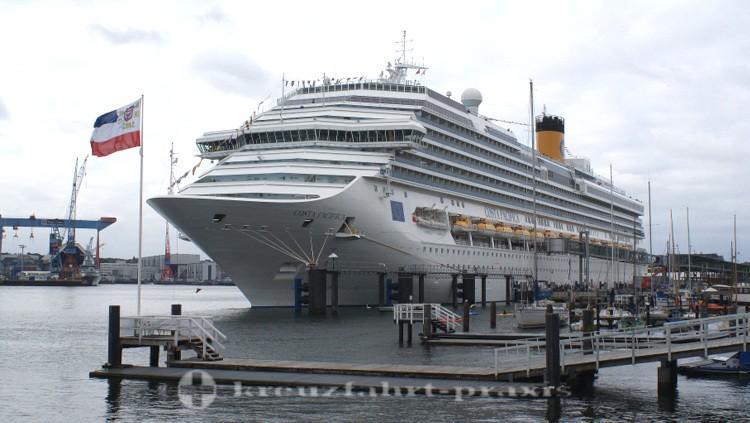 Costa Pacifica at the Ostseekai in Kiel

In 2004, Carnival assigned the German cruise brand to the Costa shipping company AIDA Cruises to. This previously belonged to the British P&O group, which transferred its cruise operations to Carnival in 2003. Costa also took over the cruise brand focused on the Spanish market IberoCruceros. However, in 2014 this brand was discontinued.

The Genoa-based cruise line kept its Italian identity despite its US owners. The Costa fleet sees itself today as a representative of "Made in Italy" worldwide. The ships of the Costa Group, positioned in the middle market segment, appeal to people of all ages and marital status thanks to their good cuisine, good entertainment and an ambitious leisure and sports offer. 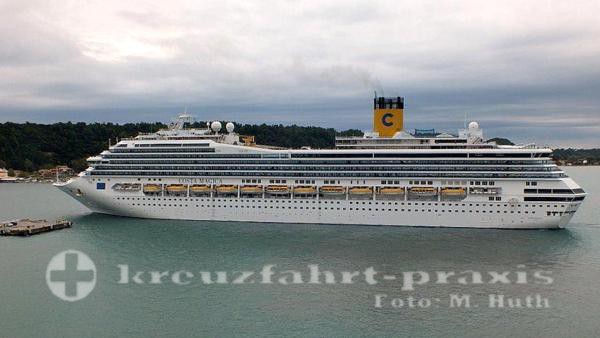 With stand September 2015 the shipping company operates 15 cruise ships. The ship units have steadily grown in size over the past few years. Examples of this are those that joined the fleet between 2007 and 2012 Costa Serena, Costa Pacifica, Costa Fascinosa and Costa Favolosa. Each of these ships has a tonnage of more than 110.000 GT. The flagship is currently the one measured at 132.500 GT Costa Diadema. It was taken over in autumn 2014. In July 2015 it was announced that the company would be releasing two even larger “next-generation” cruise ships from the Meyer Turku OY shipyard in Turku, Finland. These 337 meter long ships will have 2.605 cabins with 5.176 lower beds and a maximum capacity of 6.600 beds. The ships, which are fired exclusively with environmentally friendly liquid natural gas, measure 180.000 GT. The first of the two ships is called Costa Smeralda. It will go into operation in October 2019. An identical sister ship will follow in 2021. 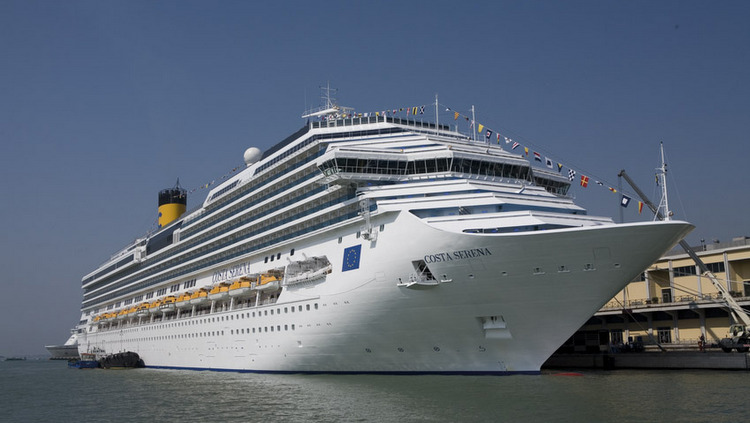 Under the name Costa neoCollection the company offers an alternative cruise experience that SlowCruise concept. What used to apply to small “noble ships” will now also be offered by the shipping company's three smaller, older ships. The advertising promises trips in harmony with the sea and the guests' “own” rhythm. Travel without rush, extended stays in smaller ports as well as authentic culinary delights of the region should offer the guests added value. For passengers who value exclusivity and a little luxury, the three ships of the "neoCollection" are on the way to Northern Europe, the Mediterranean, Dubai / Emirates, Africa and the Indian Ocean. 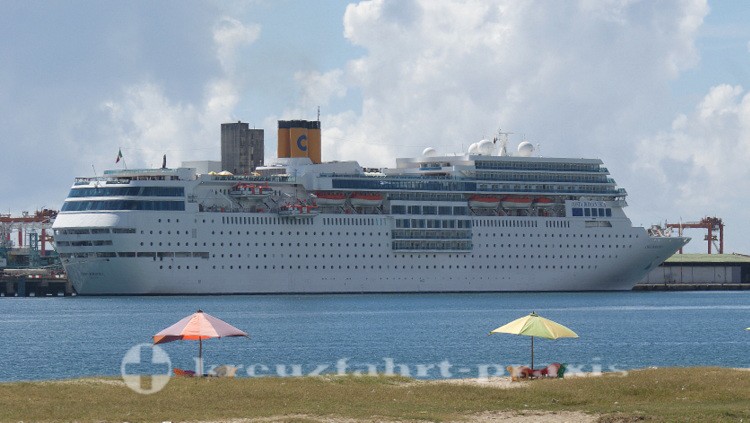 Costa neoRomantica in the port of Tamatave / Madagascar

The high-volume brand Costa Crociere SpA stands for the “Italian moments” in life in the world's largest cruise company Carnival Corporation & plc. The ships, which are lavishly and colorfully designed, offer passengers a lot: pleasant cabins, good restaurants and bars, well-kept entertainment as well as lavish wellness and sports facilities. The Costa ships call at destinations all over the world. Since 2006 the shipping company has been offering cruises in the growing Asian market. 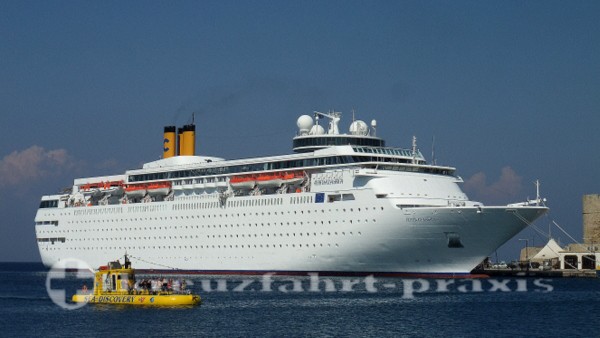 Costa neoClassica in the port of Rhodes

Costa will probably end up capsizing the 290 meter long Costa Concordia off the Mediterranean island Lily in January of 2012. The accident claimed 32 lives. After the ship disaster, the Carnival group and the Costa shipping company improved the control systems on board the ships and introduced external monitoring measures for the "bridge".