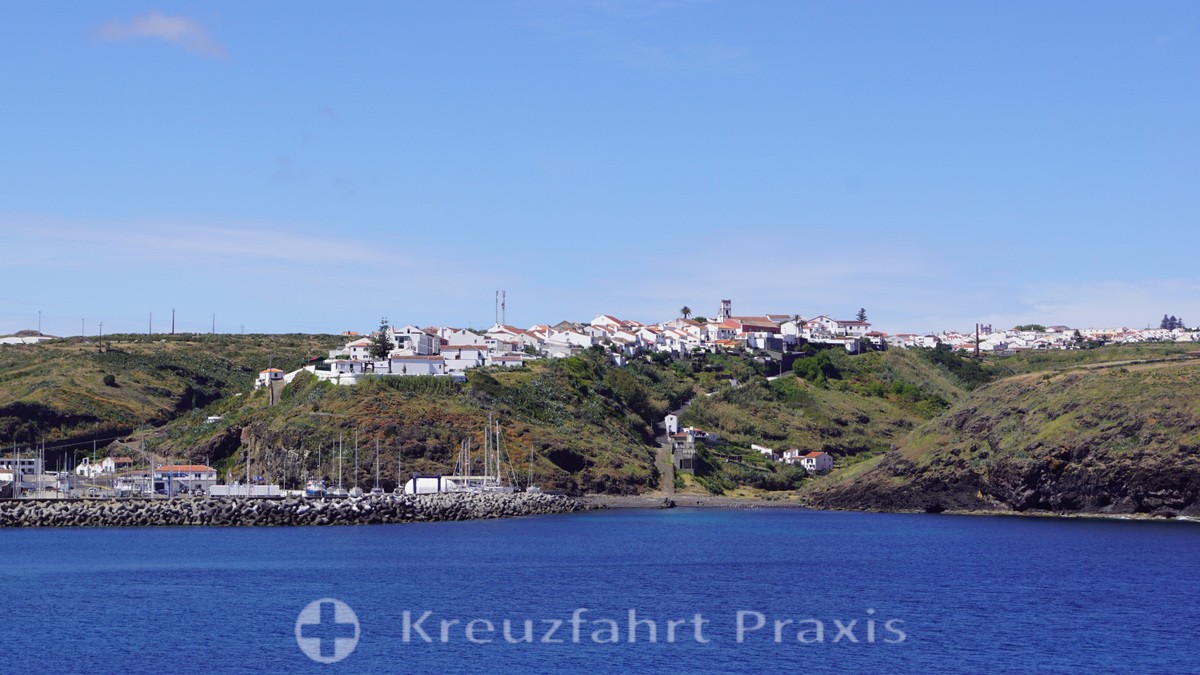 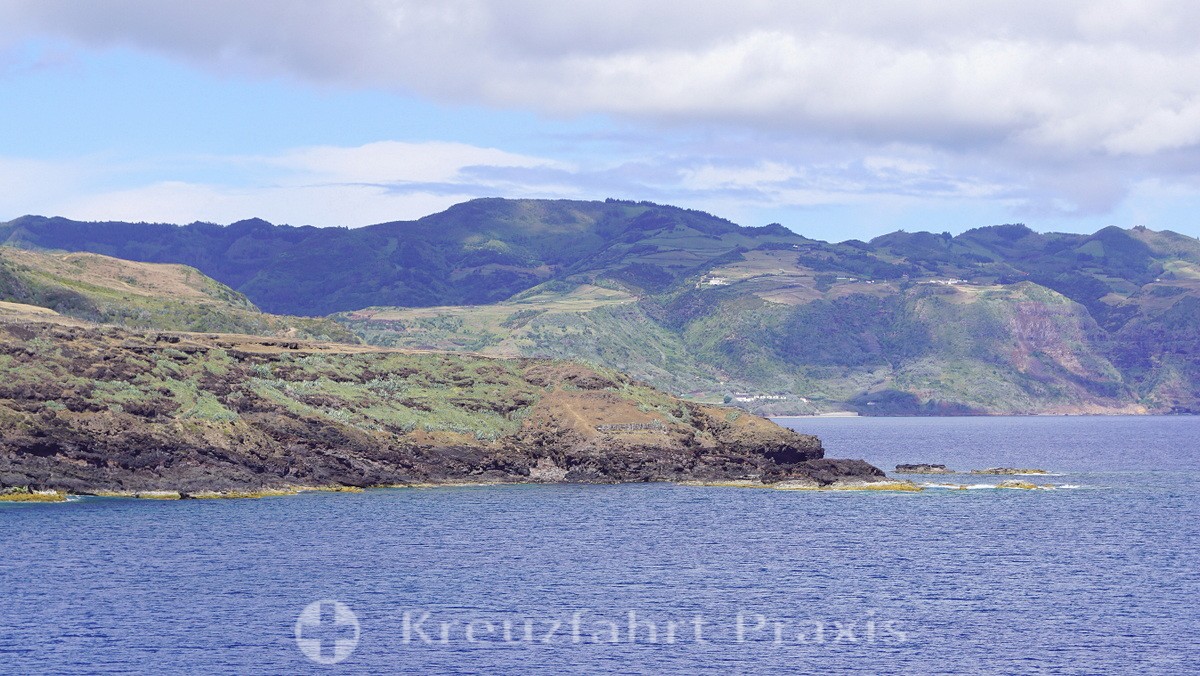 Santa Maria - stretch of coast near Vila do Porto

With an area of ​​97 square kilometers, Santa Maria is the third smallest island in the Azores. Approximately in the middle of the island is the highest mountain at 587 meters. From Pico Alto you can see all of Santa Maria. The eastern part of the island extends on a higher level, the western part is mountainous and impresses with its lush vegetation.

Due to its location, it is somewhat milder, warmer and drier on Santa Maria than on the other Azores islands. Santa Maria is therefore also called the sunny island. 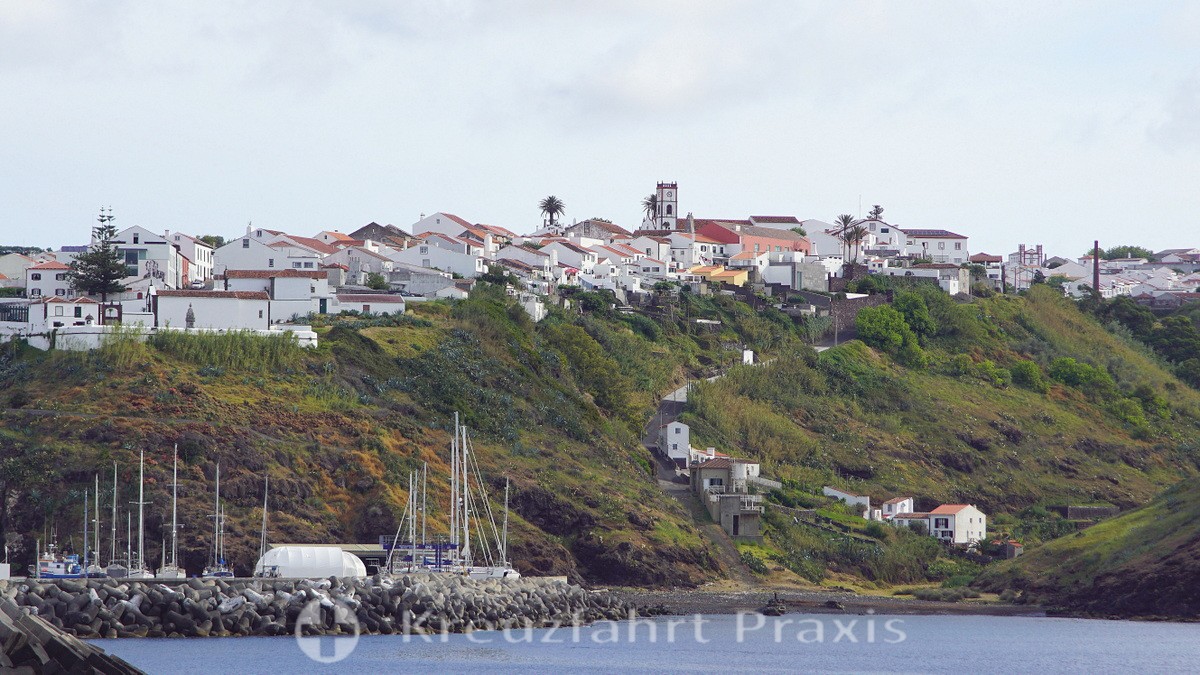 Santa Maria owns an airport that the Americans built as a military base for their air force during World War II. Until the 1960s, this airport served as a refueling stop for transatlantic flights and as a hub for Azores flights. There are currently direct connections to São Miguel and Lisbon.

In the only port, the Marina of Vila do Porto, the ferry from São Miguel and cargo ships dock, as do the fishing and diving boats, motor and sailing yachts, and very rarely a cruise ship is in the roadstead. 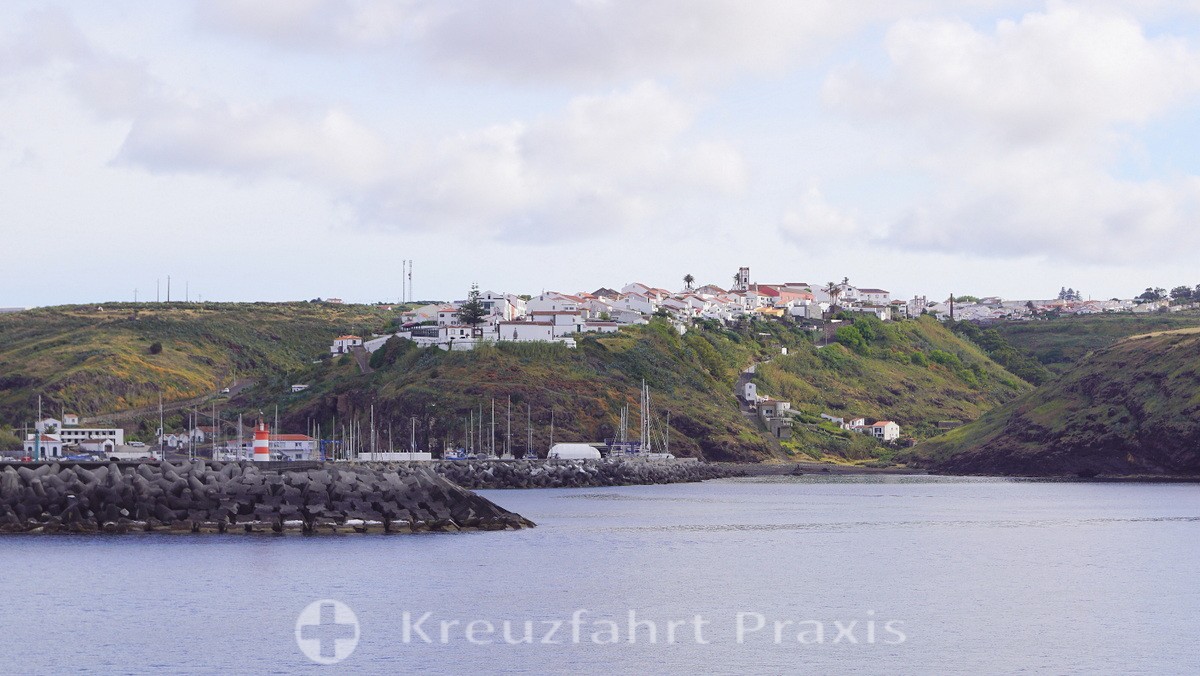 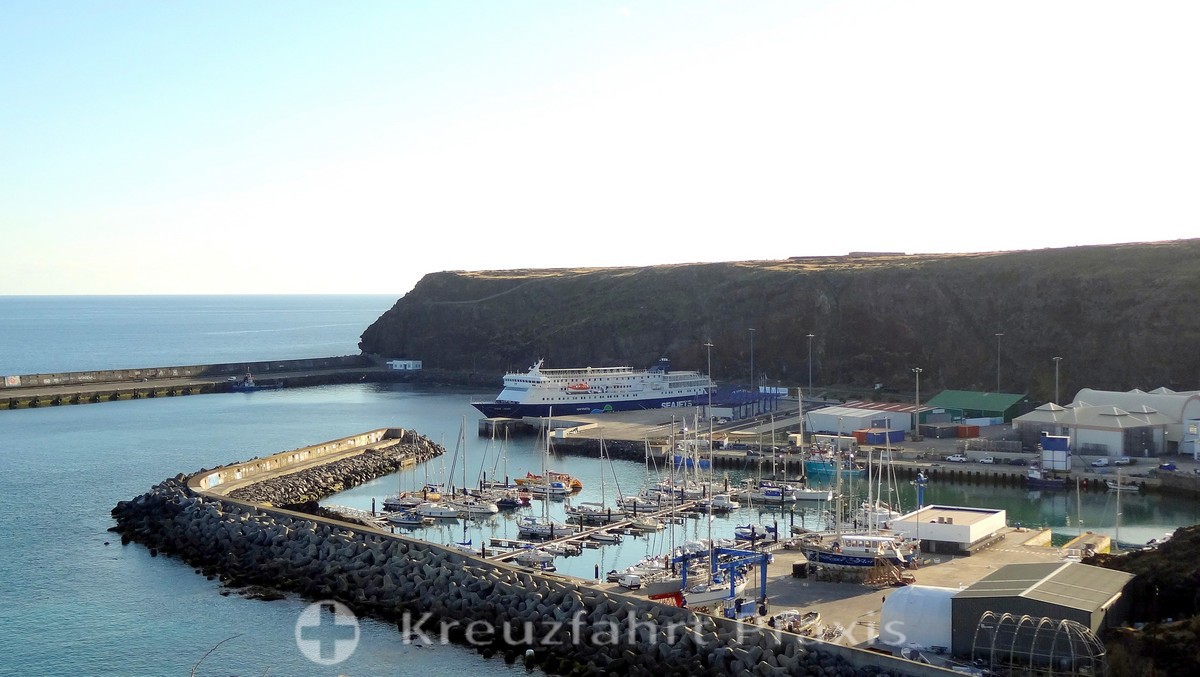 There are several bus routes, taxis and car rental companies on the island.

There is no industry on Santa Maria. Only the large airport is reminiscent of past economic power. With the start of non-stop Atlantic flights and the relocation of the hub for Azores flights to São Miguel, important jobs were missing. Many people left the island and Santa Maria became less important.

Today fishing, agriculture and cattle breeding characterize the island. There are good fishing grounds around Santa Maria. The soil is fertile, melons and vines are mainly grown. Cattle and sheep can be seen in the pastures. 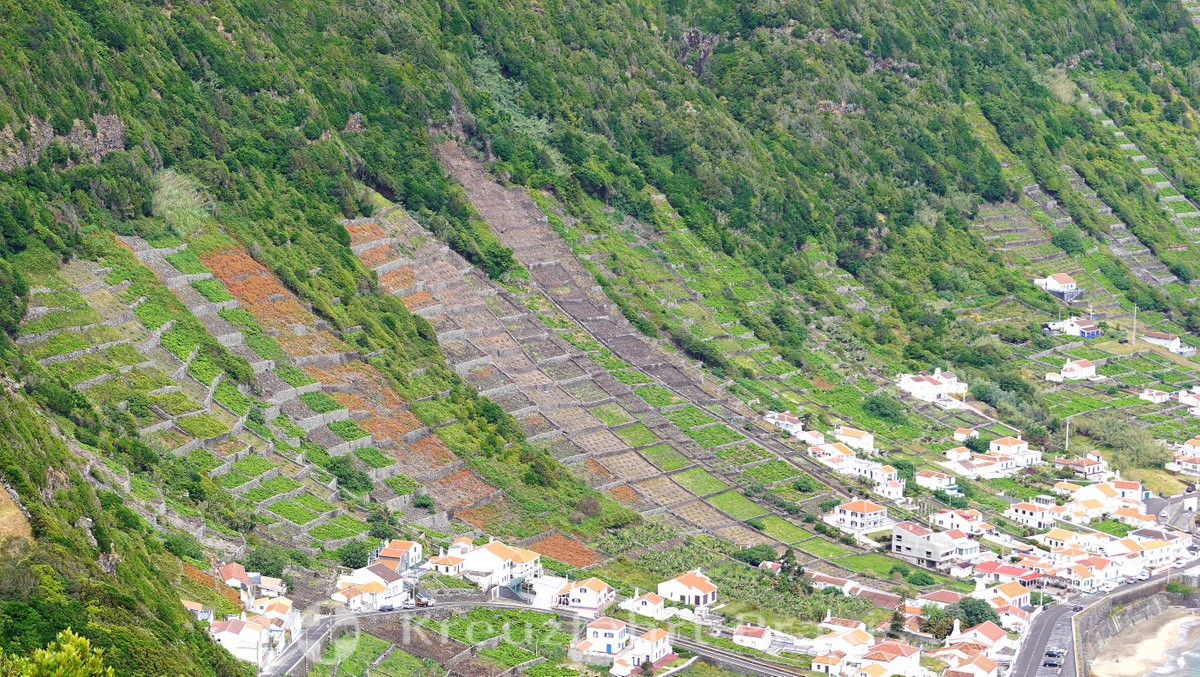 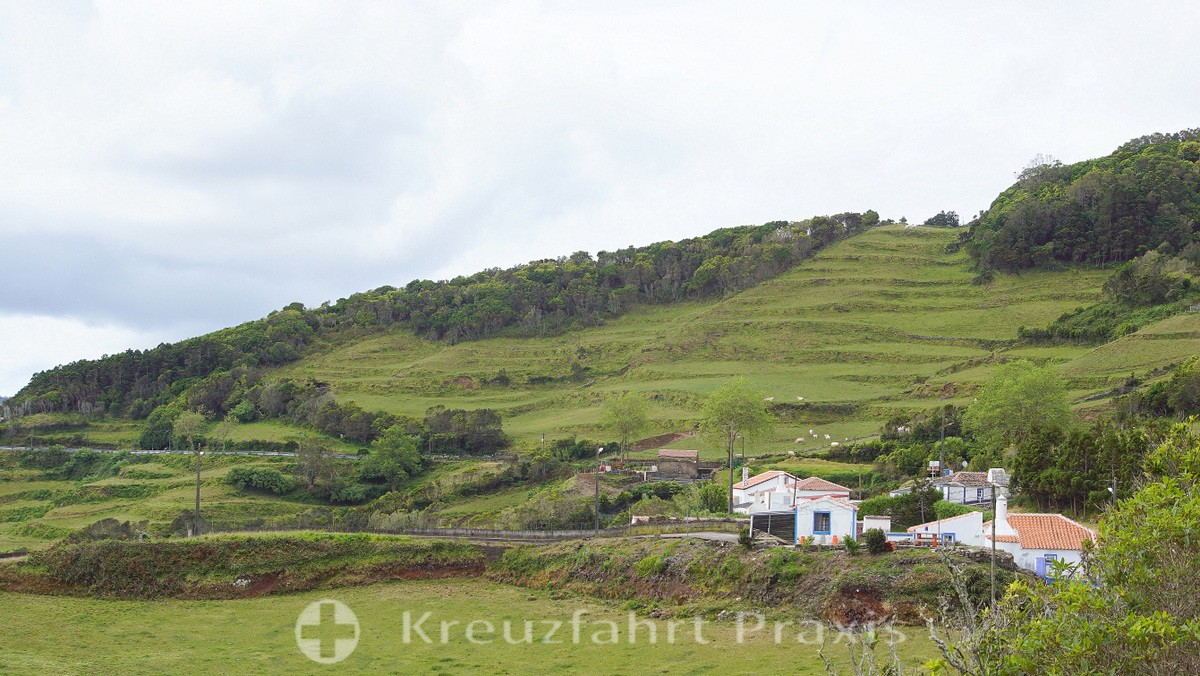 Another source of income is tourism.

The island is not a destination for mass tourism. Santa Maria is a natural paradise and is appreciated by individual travelers, water sports enthusiasts and hikers. Many emigrants spend their holidays in their former homeland.

Santa Maria is the only Azores island to have light sandy beaches, such as Praia Formosa and Praia Maia. 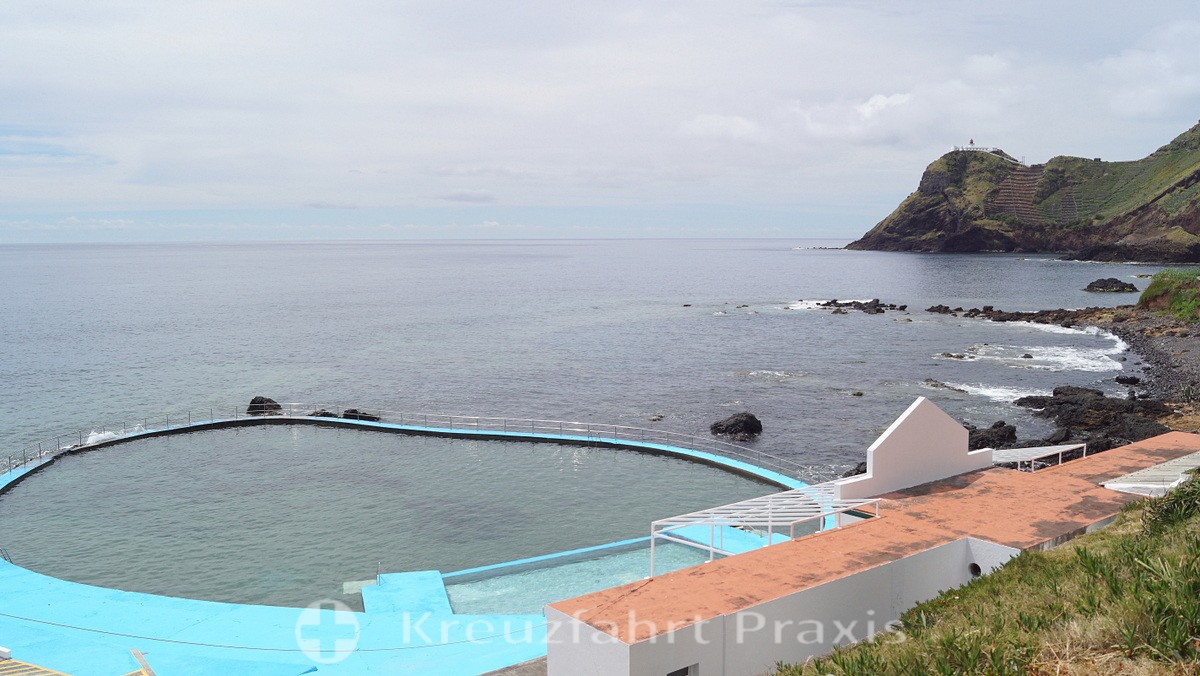 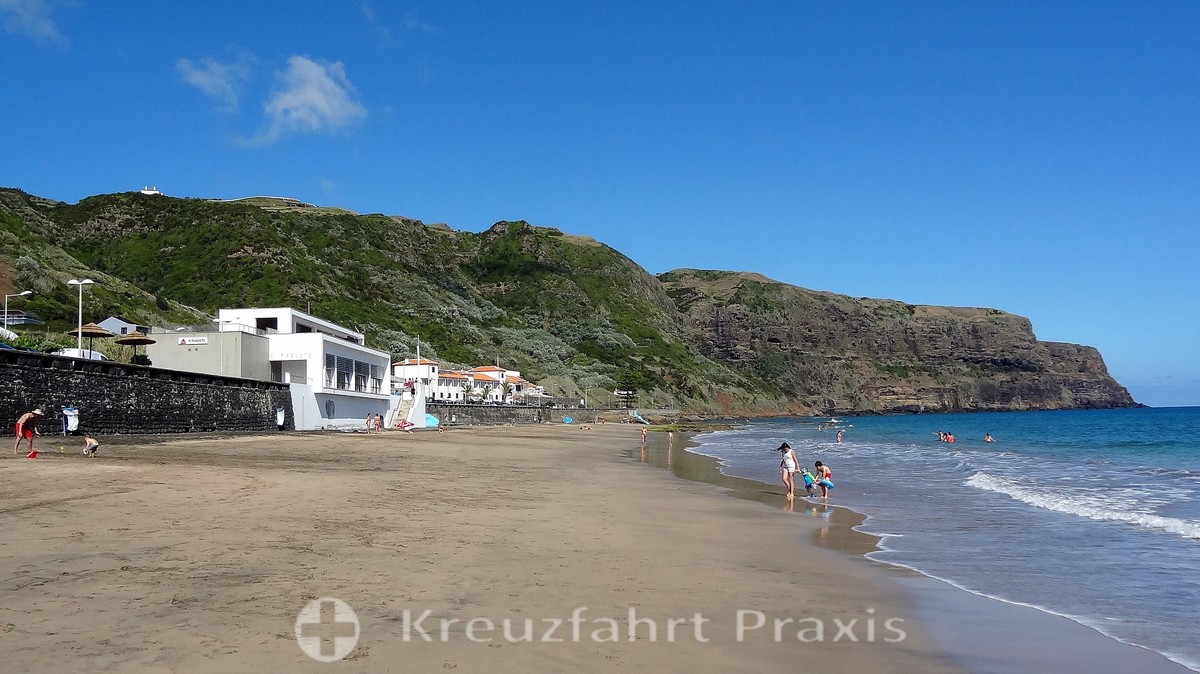 There are well-developed hiking trails with interesting routes to water cascades, rock formations.

The cliffs and the offshore islets offer good diving grounds. Likewise the Formigas, eight uninhabited islands that belong to Santa Maria and form the north-eastern end of the Azores archipelago. Divers are allowed to stay in the area under strict nature protection requirements.

Santa Maria is a picturesque island. Stone walls limit the pasture and arable land. The small villages look old-fashioned. The houses are scattered around, are white with orange-brown roofs and have large chimneys. The base, window and door niches are set off in contrasting colors. Blue, green, yellow ocher, red or gray: each municipality has its own color. 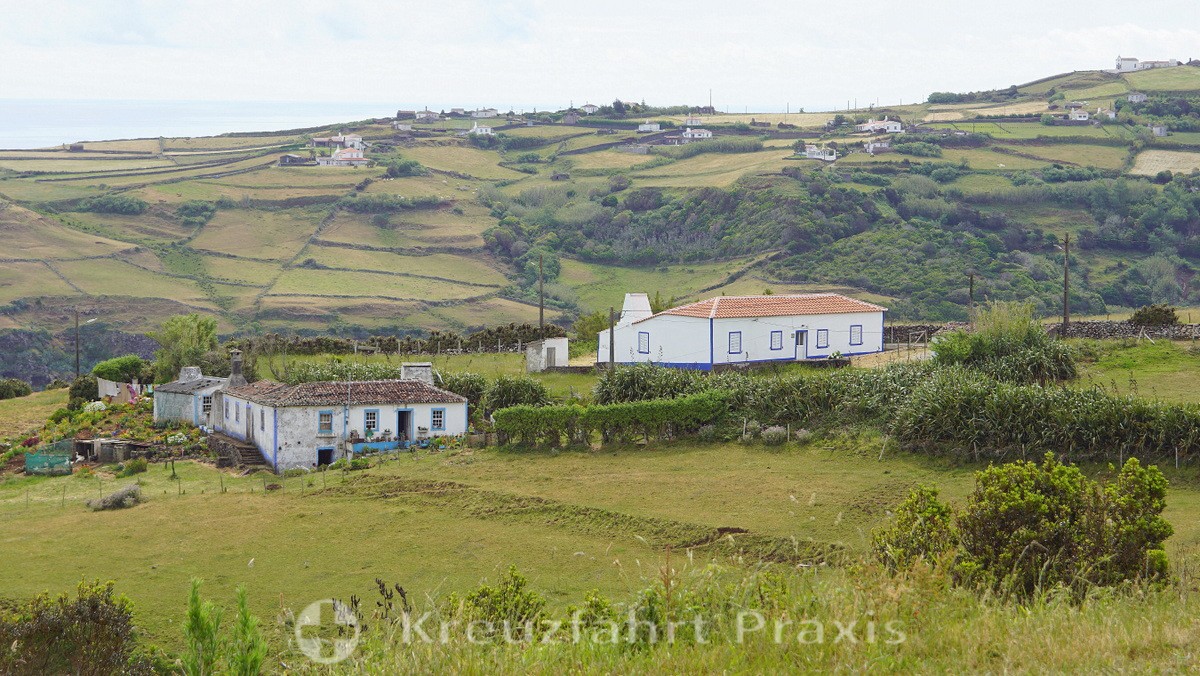 The Pico Alto and beautiful Miradouros

The highest mountain with 587 meters offers a 360 degree panoramic view over Santa Maria. Many hiking trails lead through the sometimes lush vegetation around Pico Alto.

All over Santa Maria there are viewpoints from which one can admire the picturesque landscape, the coastline and the sea. We particularly like these:

The Miradouro Baia de São Lourenço is located above the bay of the same name, which looks like an amphitheater due to its terraced vineyards.

Ponta do Castelo: The Vigia da Baleia viewpoint offers the most beautiful view of the Gonçalo Velho lighthouse.

The bay of Anjos is worth seeing in itself. In the village of Anjos you should visit the statue of Christopher Columbus and the Ermida de Nossa Senhora dos Anjos. Columbus is said to have celebrated a mass in the hermitage in 1493. Only an archway remains from the original chapel. The old cross on the hill next door also dates from the 15th century. 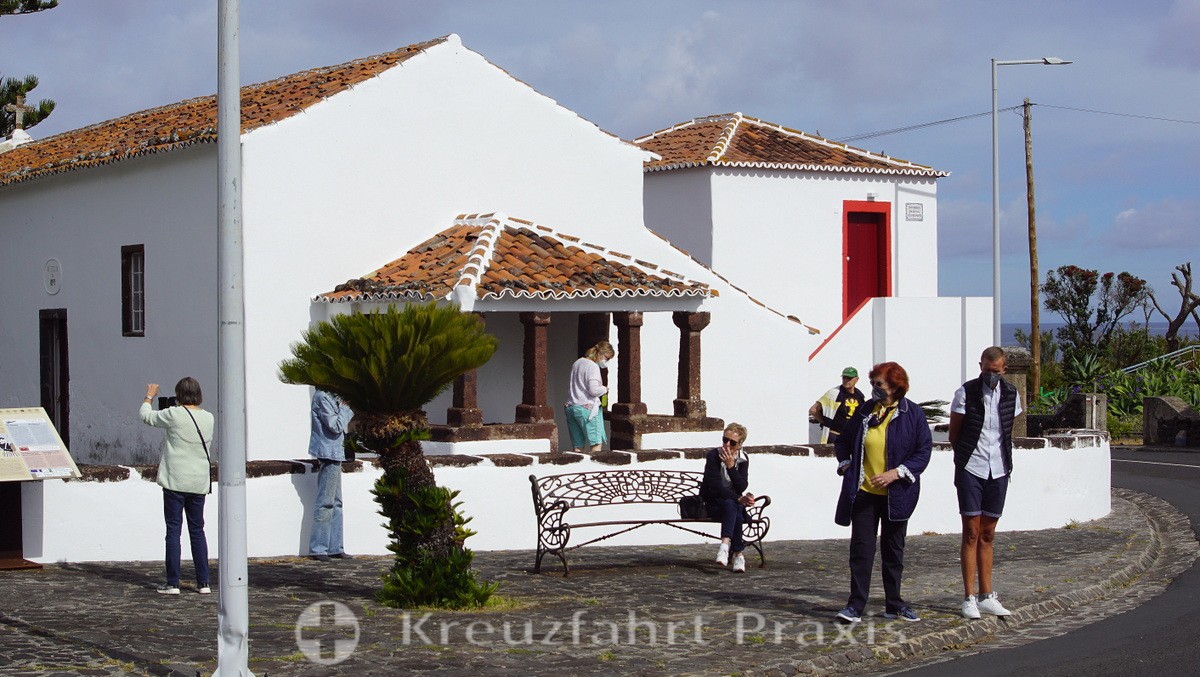 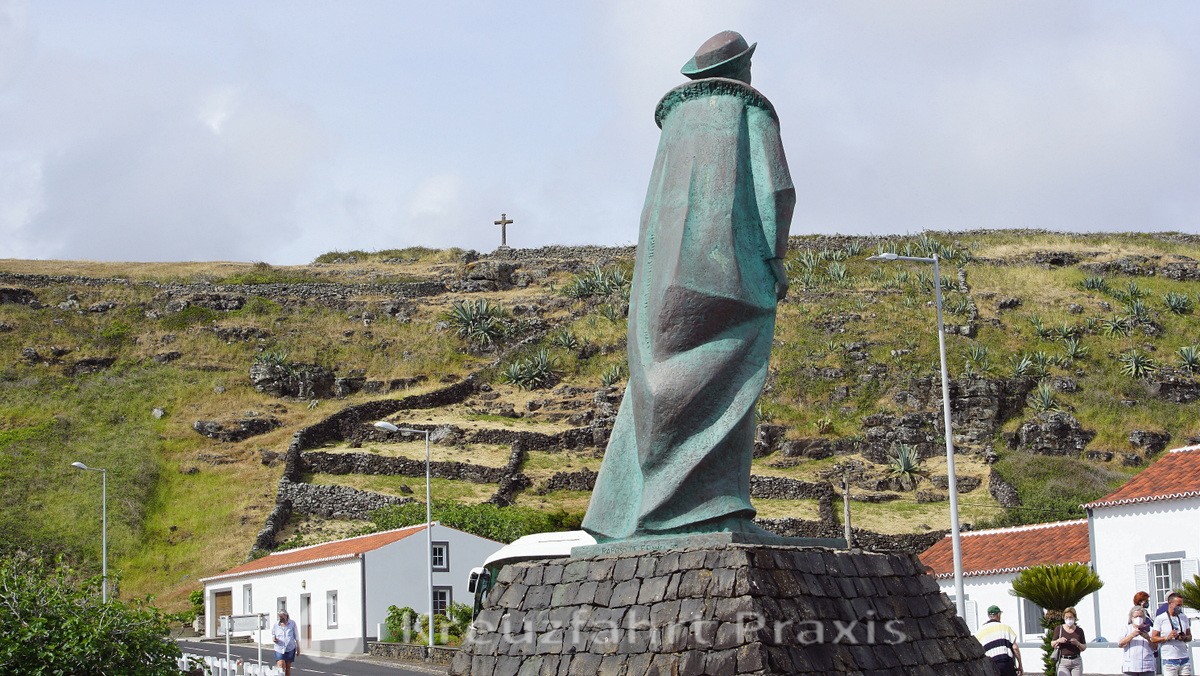 The Baia São Lourenço is a long bay with a light sandy beach. The Ilhéu do Romeiro rock spire is located off the coast. In the background are terraced vineyards, always divided and protected by the typical stone walls. 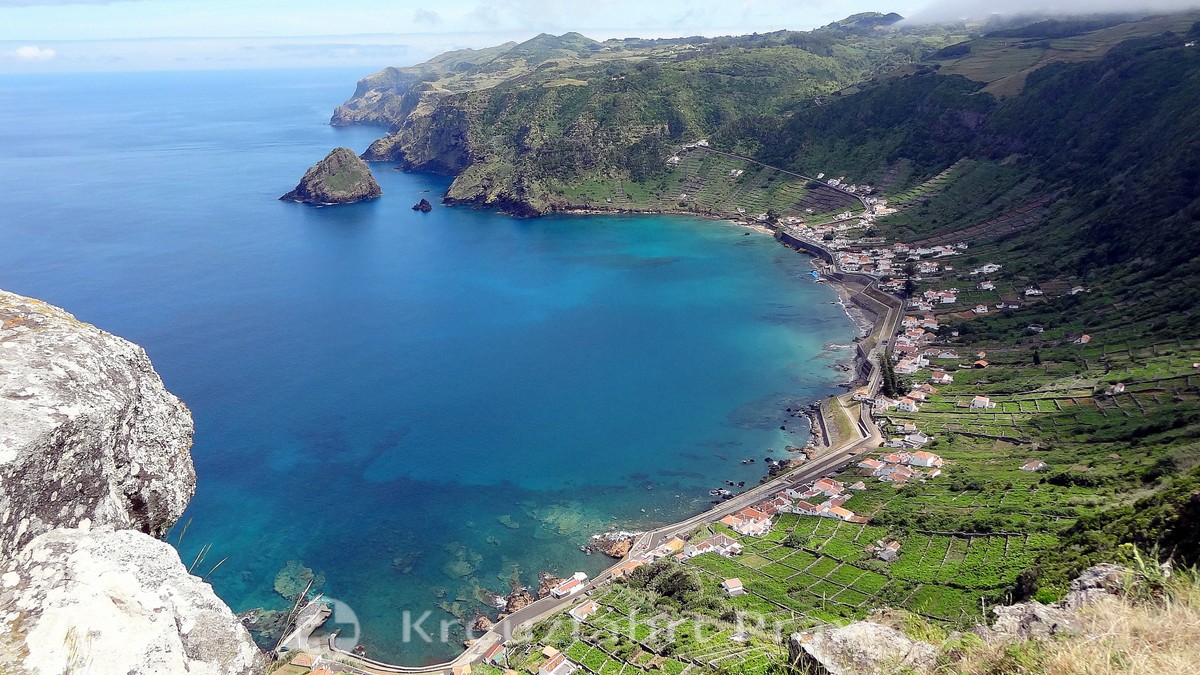 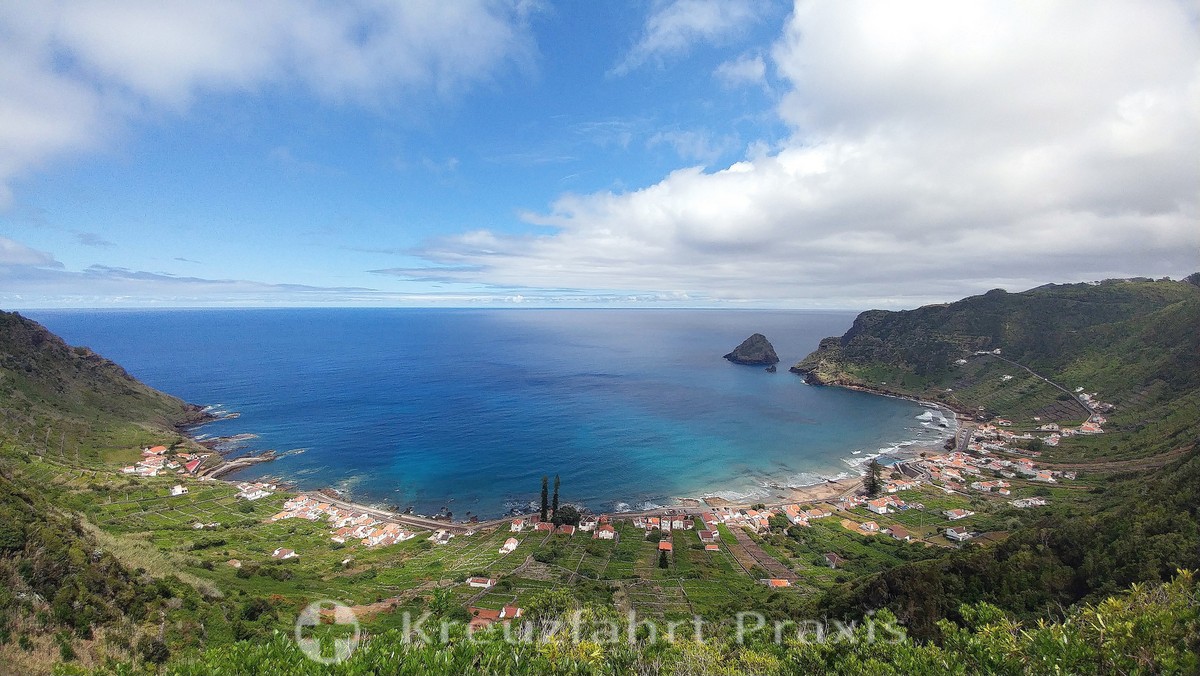 Who expects dream beaches in the Azores? Yet they do exist, and on Santa Maria it is the only island in the Azores with light sand. The most famous are Praia Formosa and Praia Maia. The beaches have natural swimming pools and offer good opportunities for water sports.

In every parish in the Azores, the churches are one of the focal points of communal life. Although not so conspicuous from the outside, the parish churches of Santa Bárbara and Santo Espérito have particularly beautifully appointed interiors. 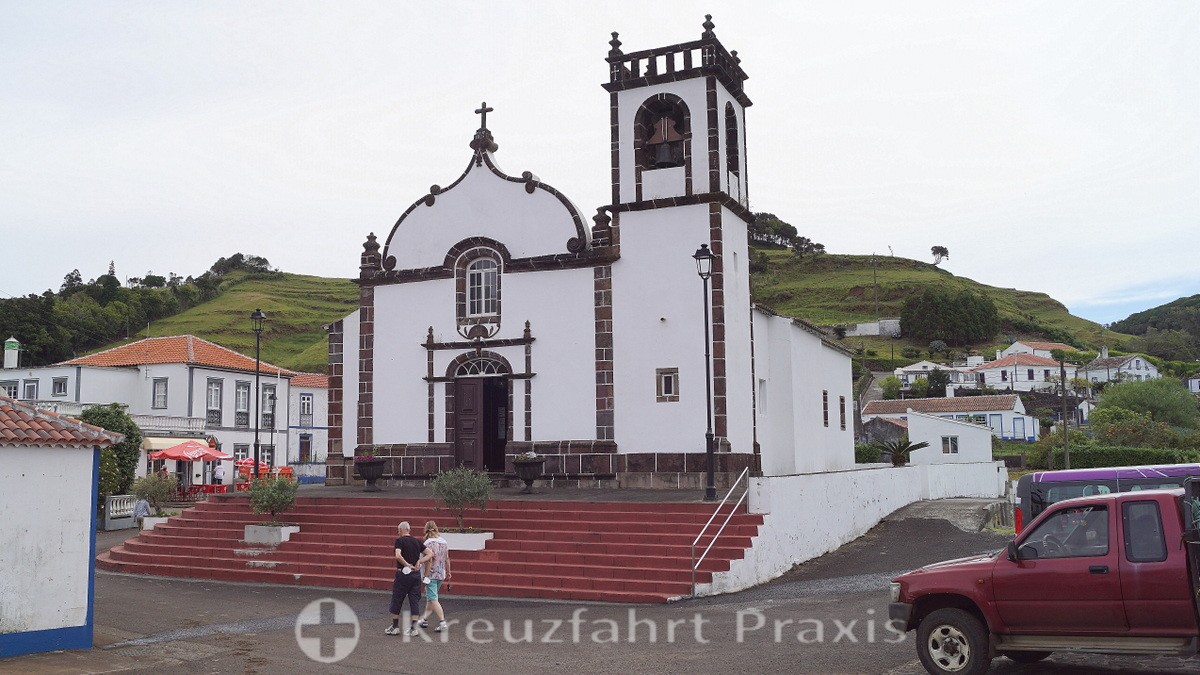 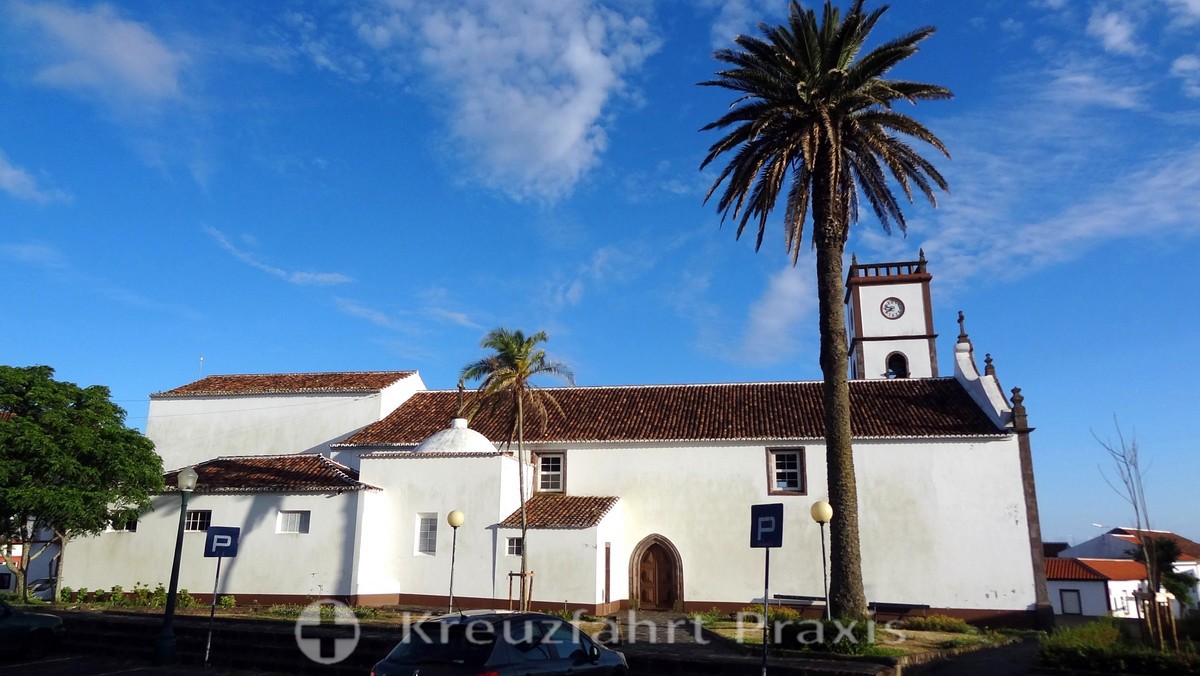 The pilgrimage chapel of Nossa Senhora da Fátima is located near Lagoinhas. 150 steps (analogous to the pearls of the rosary) lead to the gem.

Another chapel worth seeing is on Praia do Norte: Nossa Senhora de Lurdes.

The parish church of Nossa Senhora da Assunção is dedicated to the patron saint of Vila do Porto. It dates from the 16th century and is one of the oldest churches in the Azores.

The Forte de São Brás fortress was also built in the 16th century. It is located above the Marina of Vila do Porto and offers a wide view over the bay.

Buildings worth seeing on Largo de Nossa Senhora da Conceição are the former Franciscan monastery, in which the municipal administration now resides, and the Nossa Senhora da Vitória chapel from the 17th century. 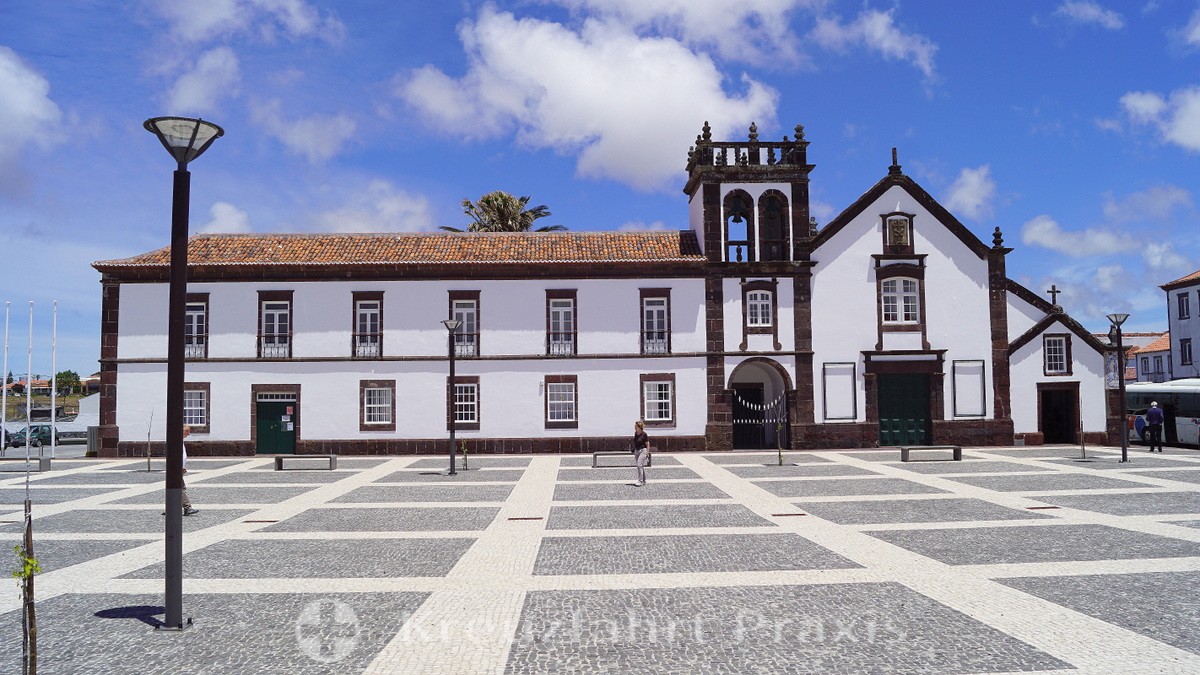 In June 2021 we will be in the roadstead with the WORLD VOYAGER in front of Santa Maria. Because of the Covid 19 pandemic, we are only allowed to leave the ship in organized groups. We opt for a half-day tour on the bus. Many of the sights of Santa Maria are on the program.

With Zodiacs we go to the Marina of Vila do Porto. The main town of the island with the Forte de São Brás fortress, located a little above the bay, looks picturesque and inviting. In the marina there are several boats and also very nice yachts. 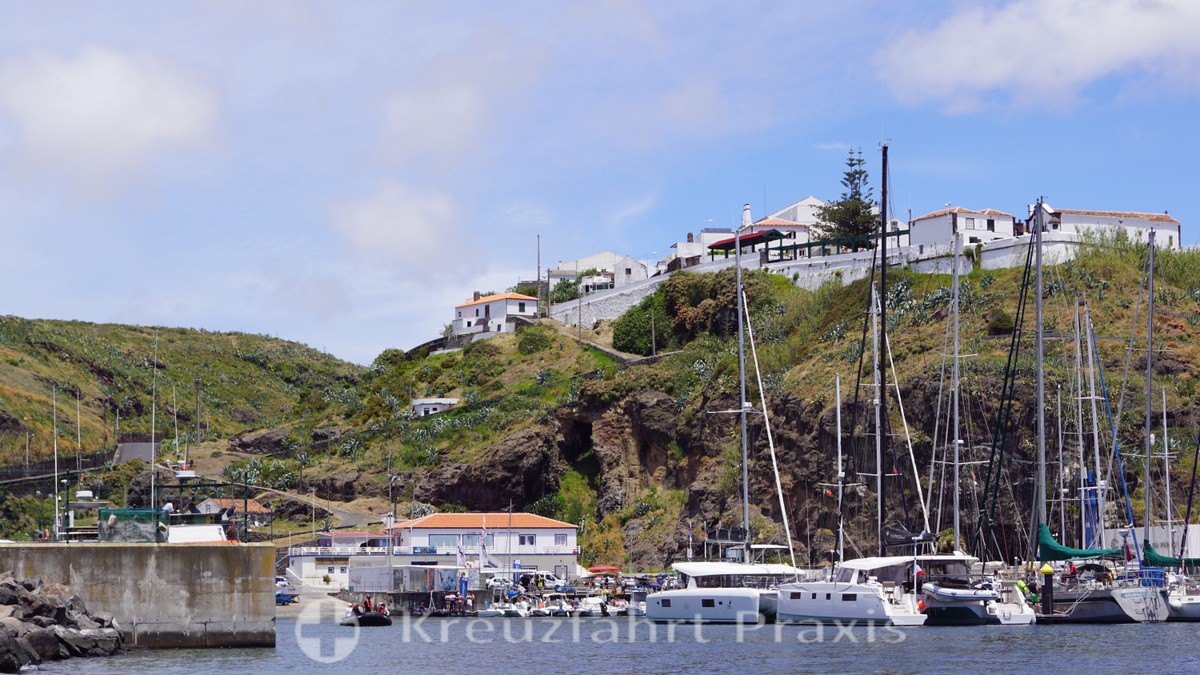 We get into a comfortable coach and drive clockwise around the island. We drive past the airport to Anjos. There we visit the Nossa Senhora dos Anjos chapel and the Columbus monument.

We continue overland to the west, past white houses with large chimneys to the Miradouro das Lagoinhas. From here you can see the Caldeira and large parts of the north coast of Santa Maria. 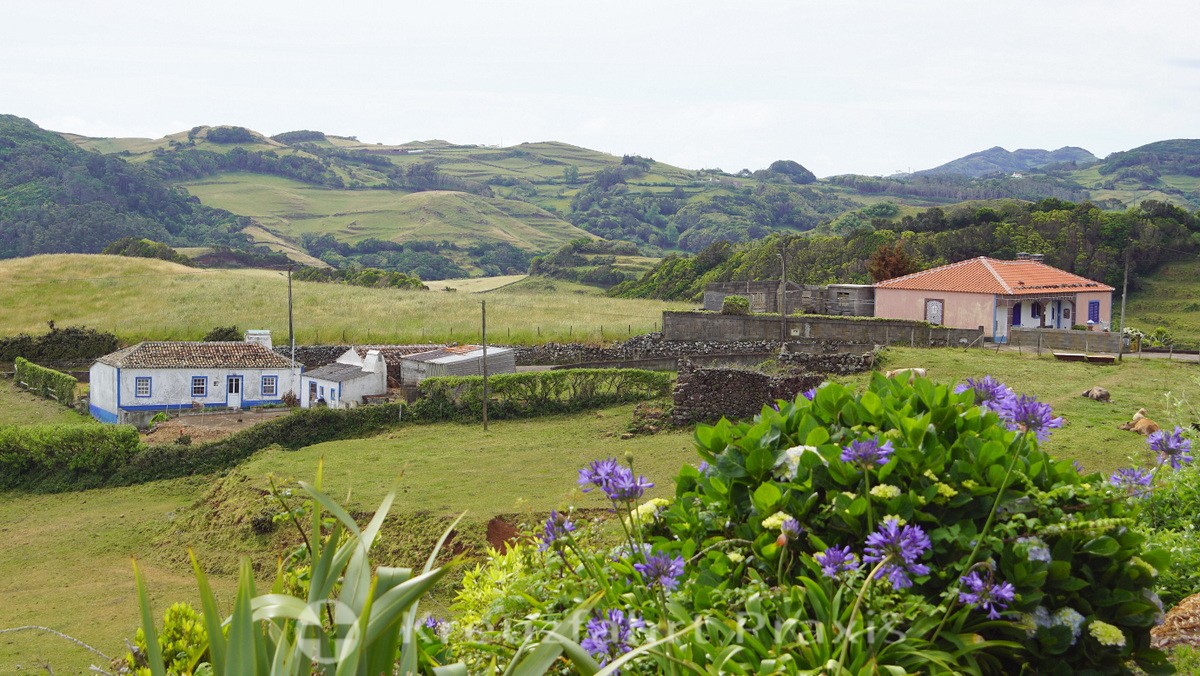 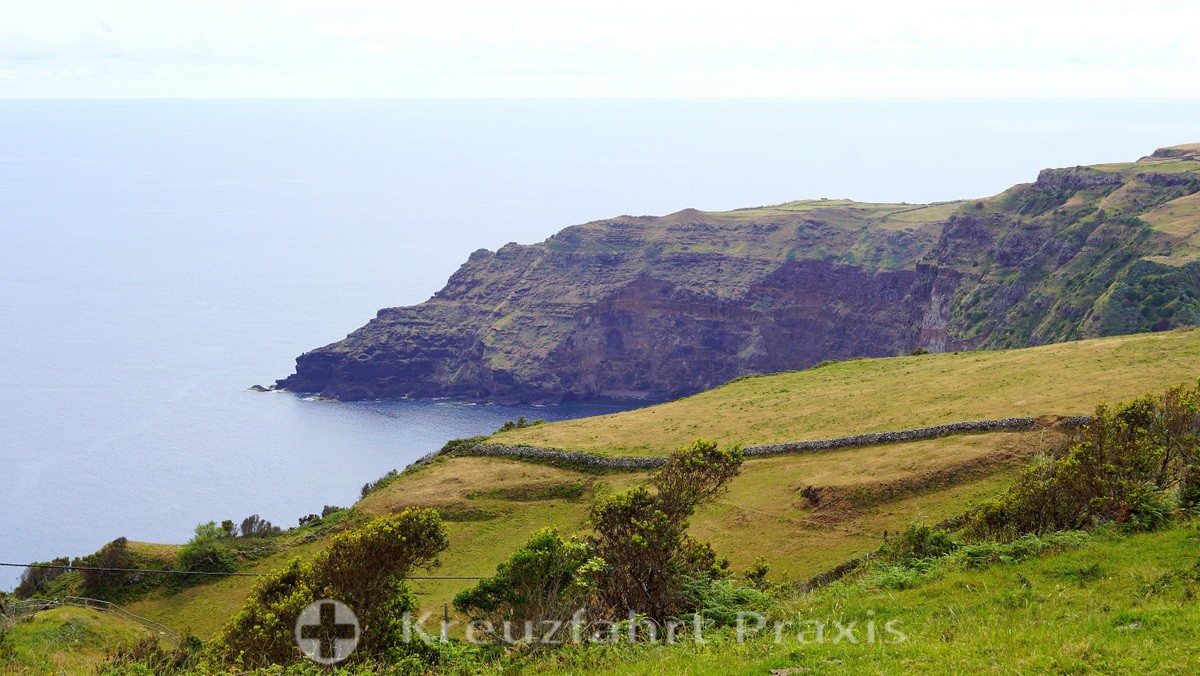 The next stops are the Parque National Costa Norte and the municipality of Santa Bárbara. The village has a particularly beautiful church.

It follows the Baia de São Lourenço. Vineyards surround the picturesque bay like an amphitheater. There is a natural bathing establishment on the bright beach.

We continue to the Miradouro Vigia da Balaia at the Ponta do Castelo. The Goncalo Velho lighthouse is high on the rocky headland, while the sandy bay of Baia Maia is down by the sea. At the next bay, Praia Formosa, we take a walk on the beach.

Finally we stop in Vila do Porto. For a short time we are allowed to explore the place alone. We visit the chapel Nossa Senhora da Vitória, take a look at the former Franciscan monastery and stroll down the main street. The place is not spectacular, but there are well-kept old houses and strikingly nicely designed sidewalks. 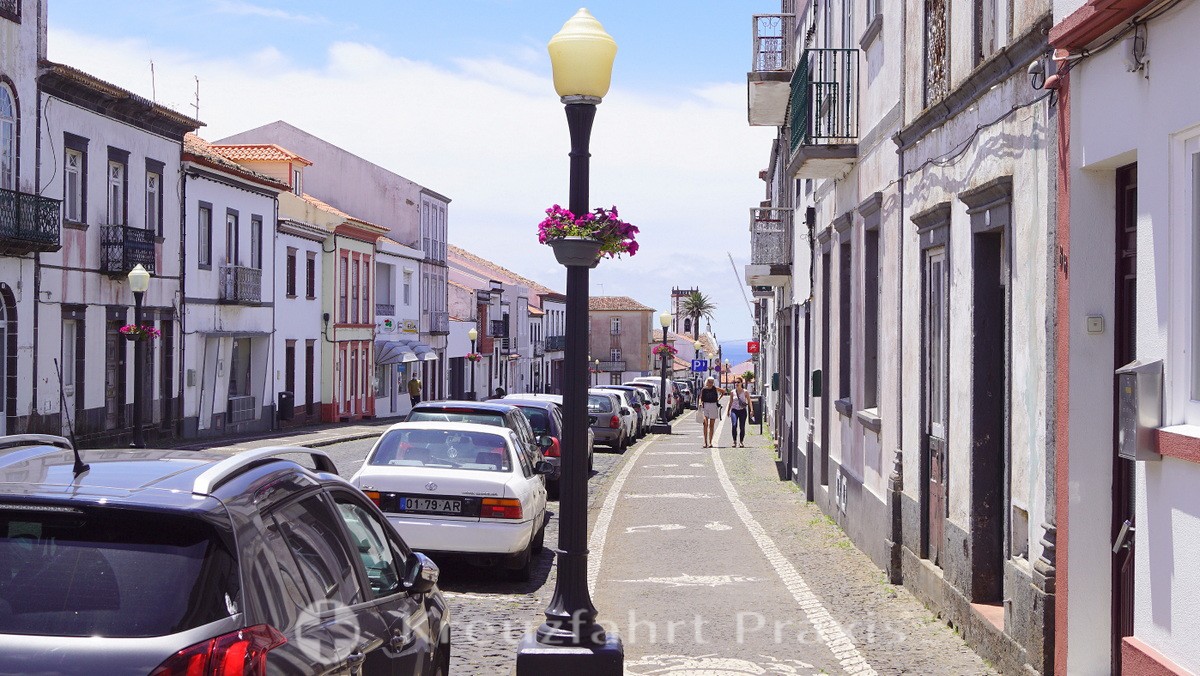 The Zodiacs are already waiting at the harbor to bring us back to the WORLD VOYAGER.

A nice day on Santa Maria.