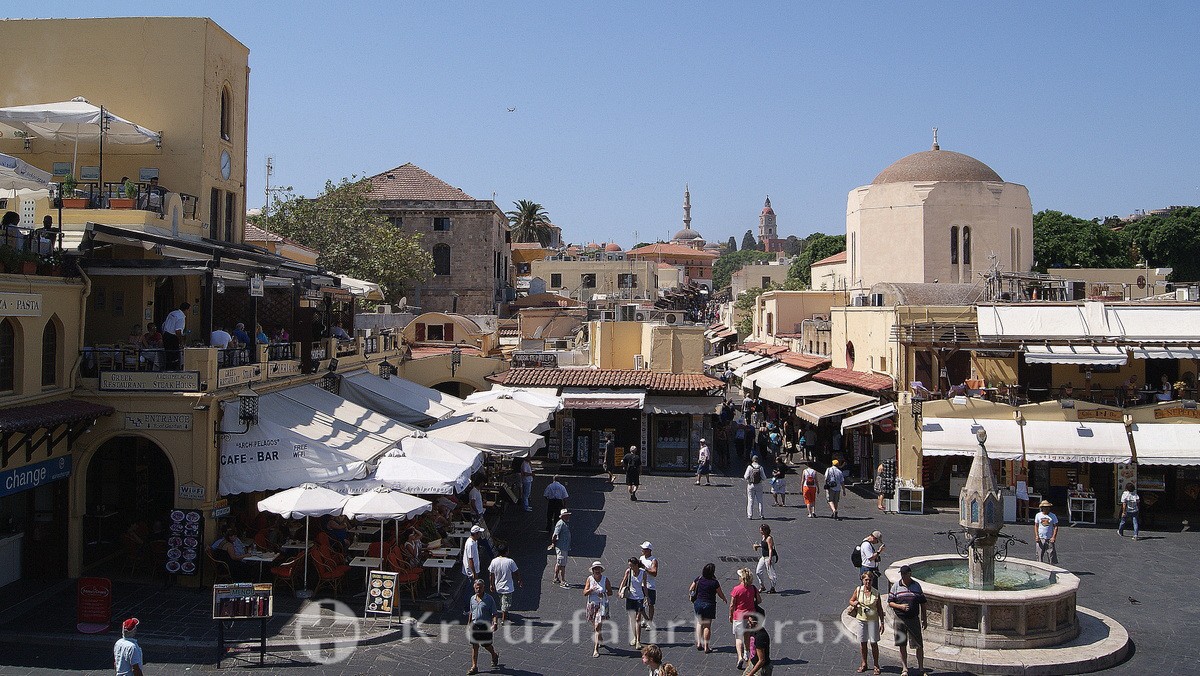 Rhodes City, the capital of the island of Rhodes, is more than 2.400 years old. The city was founded in 408 BC. The old town, surrounded by a mighty city wall, was designed as a planned city with a right-angled street system. Rhodes City became famous as the location of the Colossus of Rhodes, a monumental bronze statue that is assigned to the seven wonders of the ancient world. 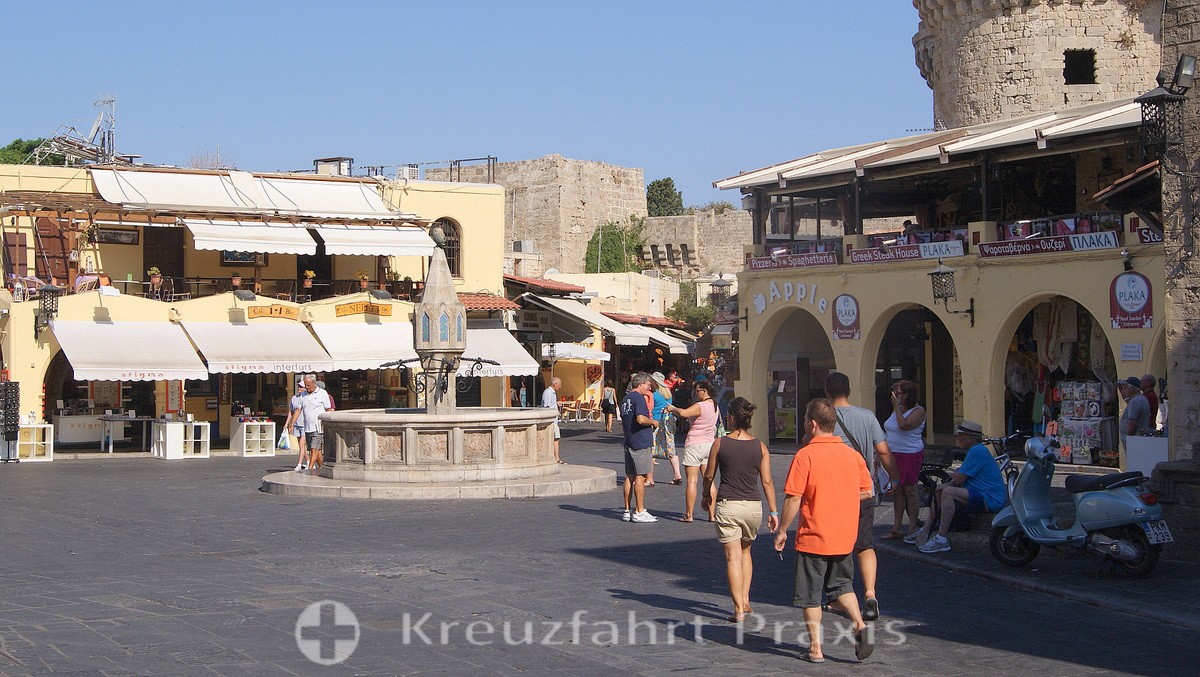 The 1.401 square kilometer island of Rhodes is one of the islands of the Dodecanese. Rhodes, the fourth largest island in Greece, is 78 kilometers long and 38 kilometers wide. Inland, mountains and extensive forests shape the landscape. The highest point is the 1.215 meter high Attavyros. In the north and south the landscape is mostly flat. Rhodes is located a few kilometers from the Turkish mainland. The island's capital and the Turkish city of Marmaris separate 46 kilometers as the crow flies.

The city was the capital of the island from antiquity, which arose from the amalgamation of three places. In the period that followed, the city became wealthy through maritime trade. The building of the Colossus of Rhodes, a more than 30 meters high bronze statue, is owed to the prosperity. Sources say that the male figure was completed after 12 years of construction around 292 BC. The colossus, dedicated to the god Helios, is one of the Seven Wonders of the World. There are doubts about the location of the statue. On the other hand, it is certain that an earthquake caused the statue to collapse after a little more than 60 years. 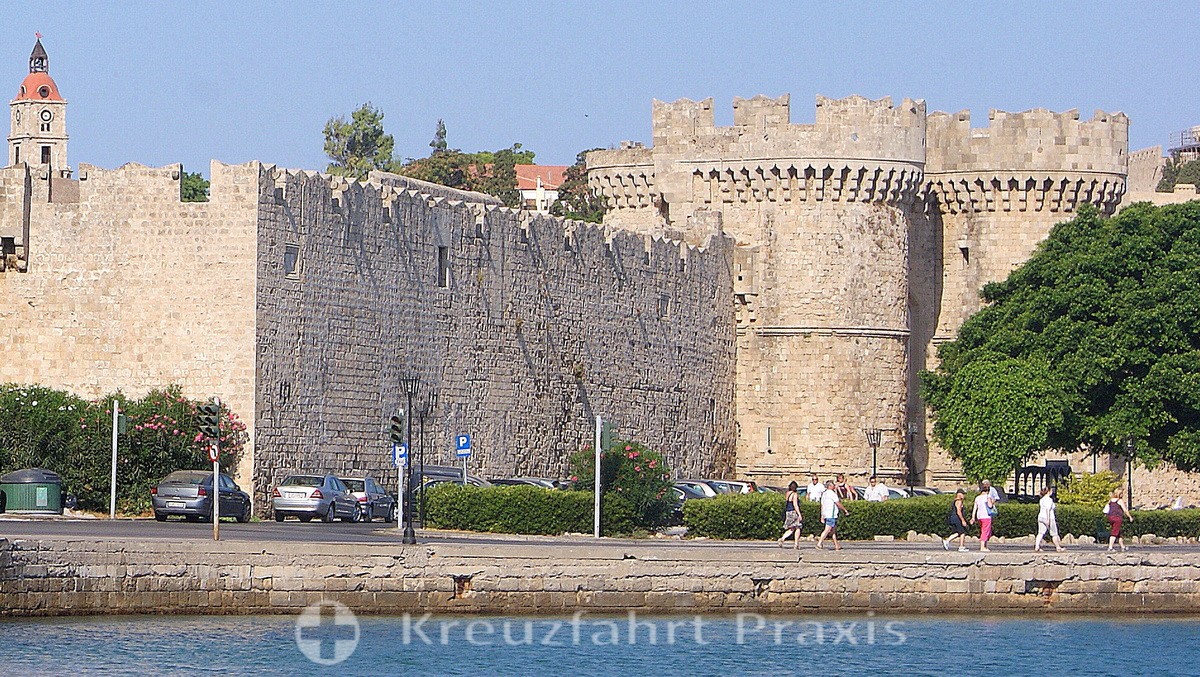 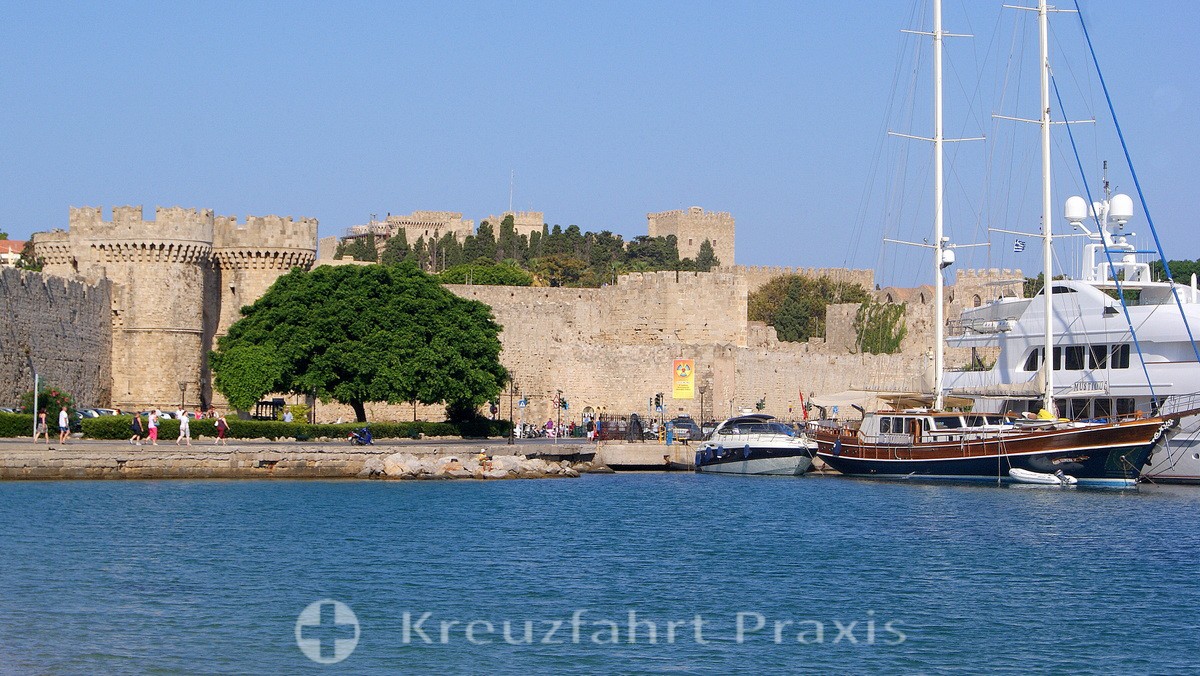 Rhodes - City Gate and the Palace of the Grand Masters

In 164 BC, the previously independent city came under Roman rule. However, the city maintained its reputation as a center of education, science, and the fine arts. The Romans were followed by the Byzantine Empire, the Arabs, the Saracens and the Franks. In 1306 the Order of St. John took over the island. The knights strengthened the fortifications and created structures that still shape the cityscape today. The Knights of St. John left Rhodes in 1523 after the Ottomans successfully besieged the island. The island has been part of Greece since 1947. 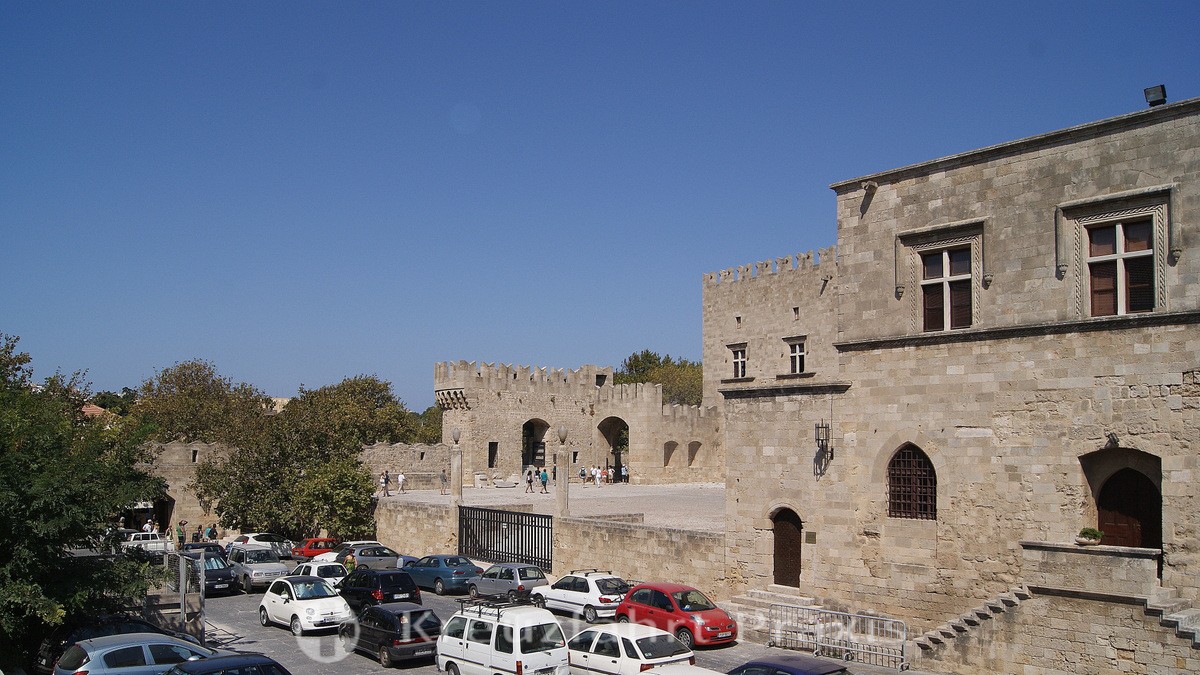 Rhodes - the Palace of the Grand Masters

Rhodes town in the present

Rhodes City is a municipality with around 50.000 inhabitants. The city consists of the fortified old town and the new town next to it. The main tourist attractions are in the old town. Outside the old town, the Acropolis with remains of temples and the stadium are on Monte Smith Hill. 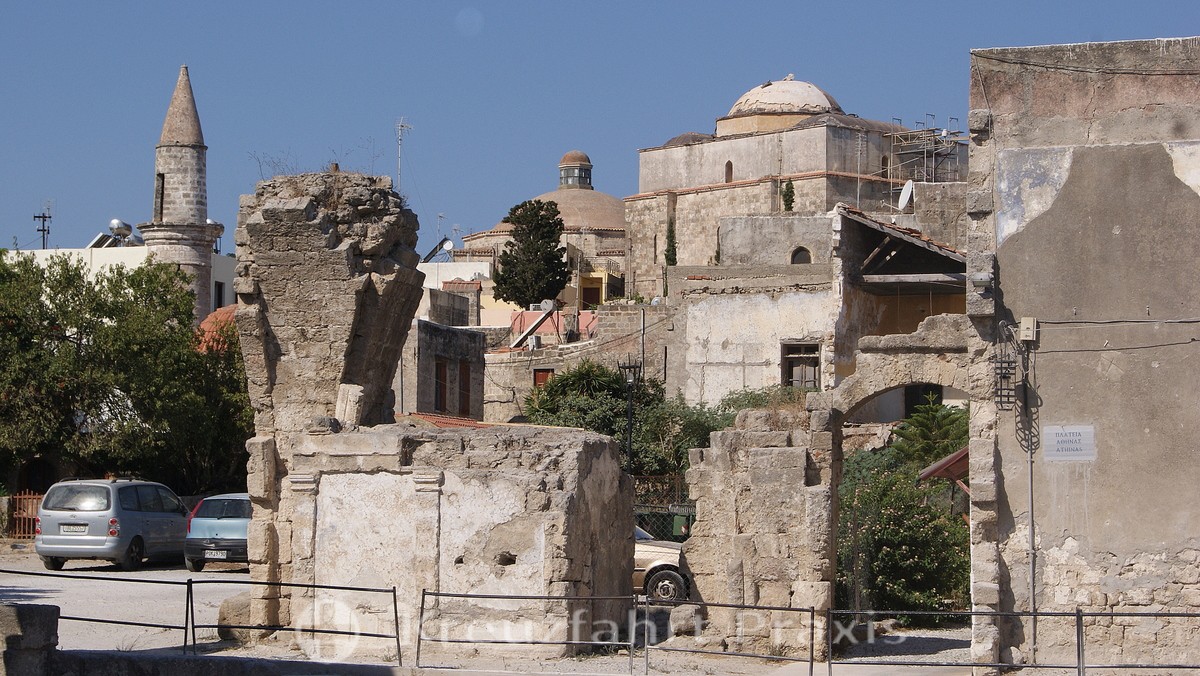 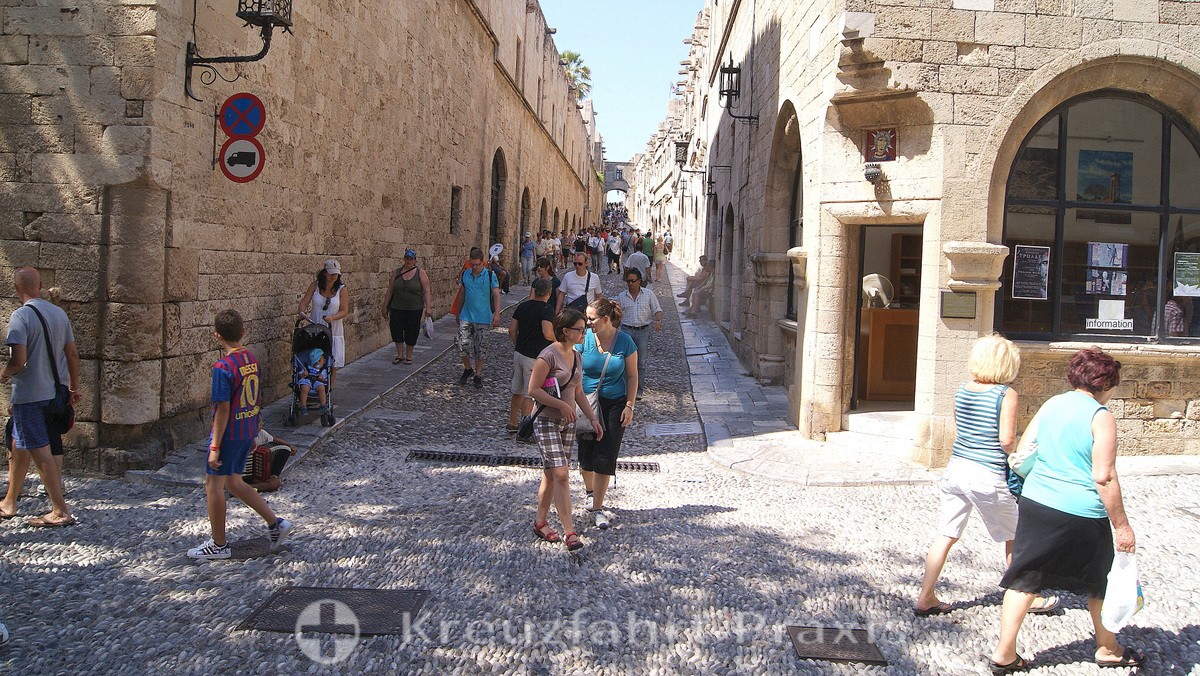 Rhodes - the street of knights

Cruise ships call at the island regularly. In 2019, more than 130 cruise ship calls were planned. The ships are close to the center of the ferry and cruise terminal in Rhodes Town. From the terminal, visitors walk a few hundred steps to the nearest city gate, the Gate of the Virgin. Under city Rhodes - landmarks let us describe the eye-catchers of the fortress city that seem important to us.