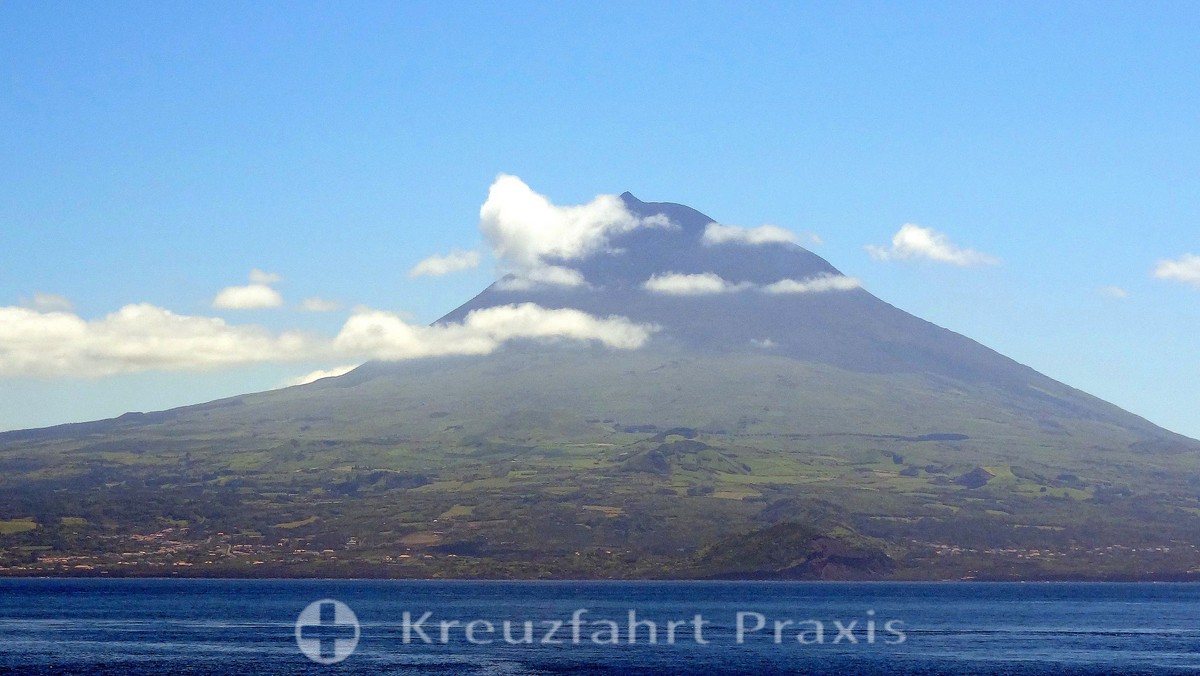 Pico belongs to the central group of the Azores. Together with São Jorge and Faial, Pico forms the so-called Triângulo. Pico is in the south, Faial in the northwest and São Jorge in the northeast of this triangle. There are ferry connections between the three islands several times a day.

The mountain island of Pico is 42 kilometers long and 15 kilometers wide. With an area of ​​448 square kilometers, it is the second largest island in the Azores. It got its name from the volcanic cone Pico, which dominates the western part of the island. 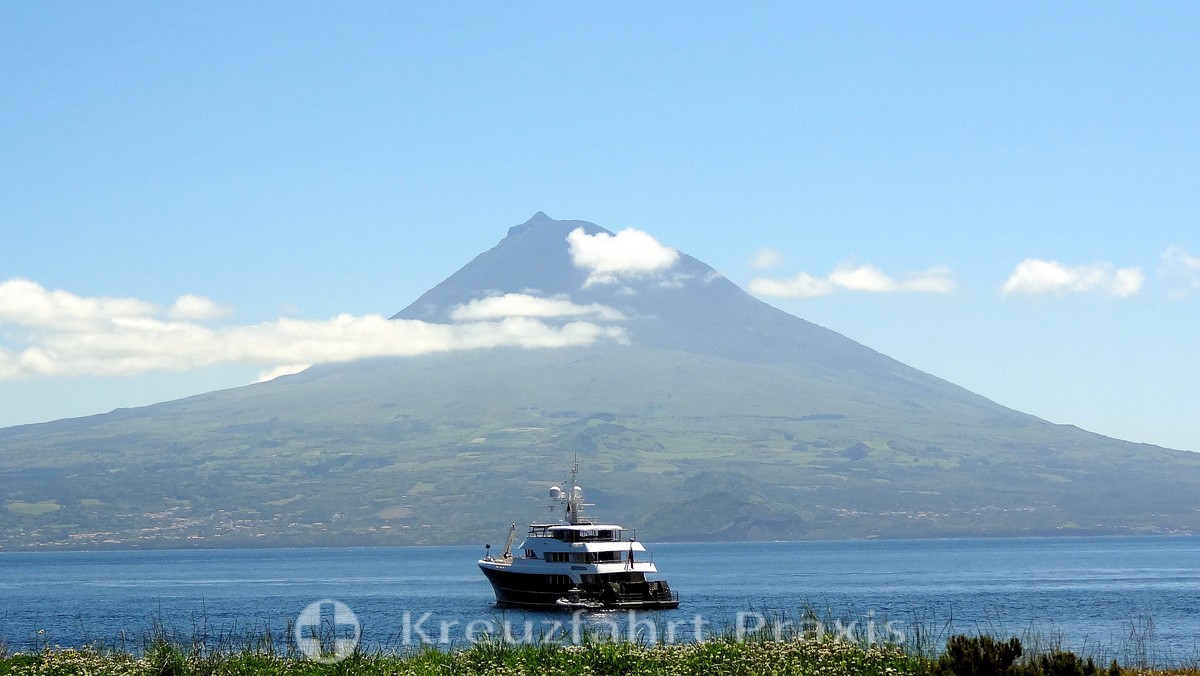 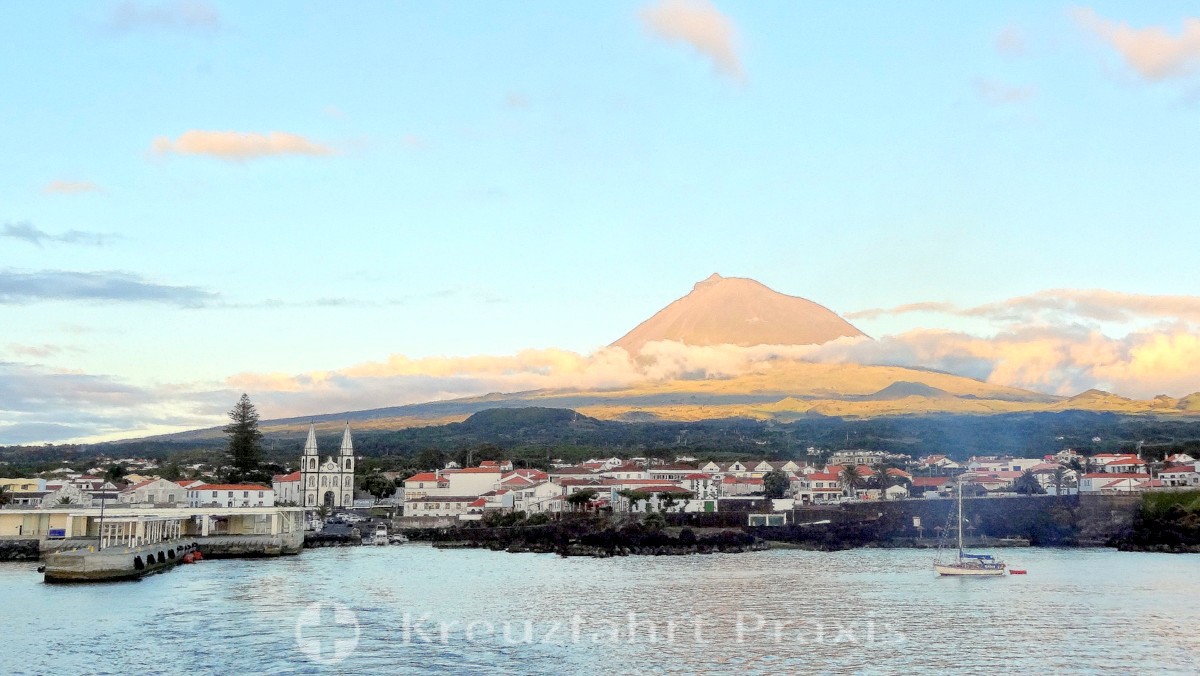 The 2351 meter high Pico is the highest mountain in Portugal and the third highest volcano in the Atlantic. The actual summit is the Piquinho, the small summit on the edge of the Pico crater. The area around the Pico has been a nature reserve since 1982. The east of the island consists of a plateau with smaller volcanic cones.

About 14.000 people live on Pico. Life is still very original. The Picaroten or Picorens, as the inhabitants are called, are considered to be particularly attached to their homeland. Pico is characterized by agriculture, whales and viticulture.

Viticulture on Pico began as early as the 15th century. However, after the last eruption of Pico in 1718, the fields were covered with black lava. 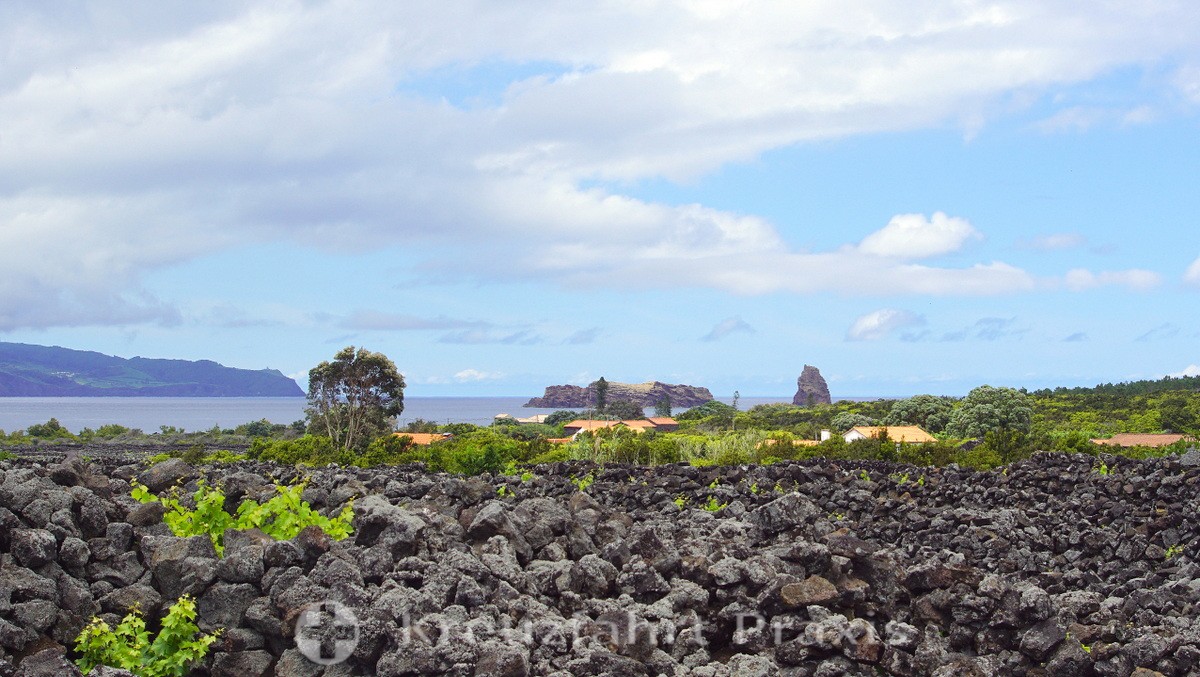 The stone was used to build houses. Walls of lava were built around the fields and the fertile soil was used again for viticulture. Green and black are still the dominant colors on the island.

From around 1850 to the 1980s, whaling was the main source of income on Pico. Today Pico is the center for whale watching in Europe.

Agriculture is practiced in the east of the island. Fruit and vegetables are grown, and cattle graze on the hilly plateau. 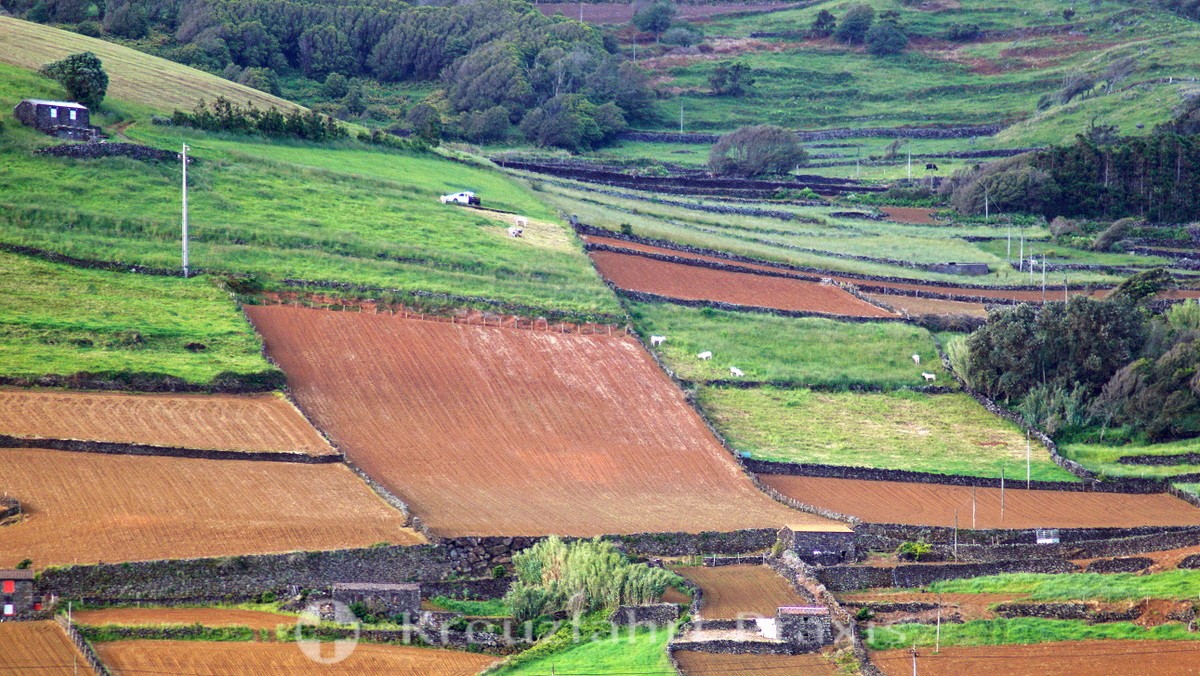 Landscape near Lajes do Pico 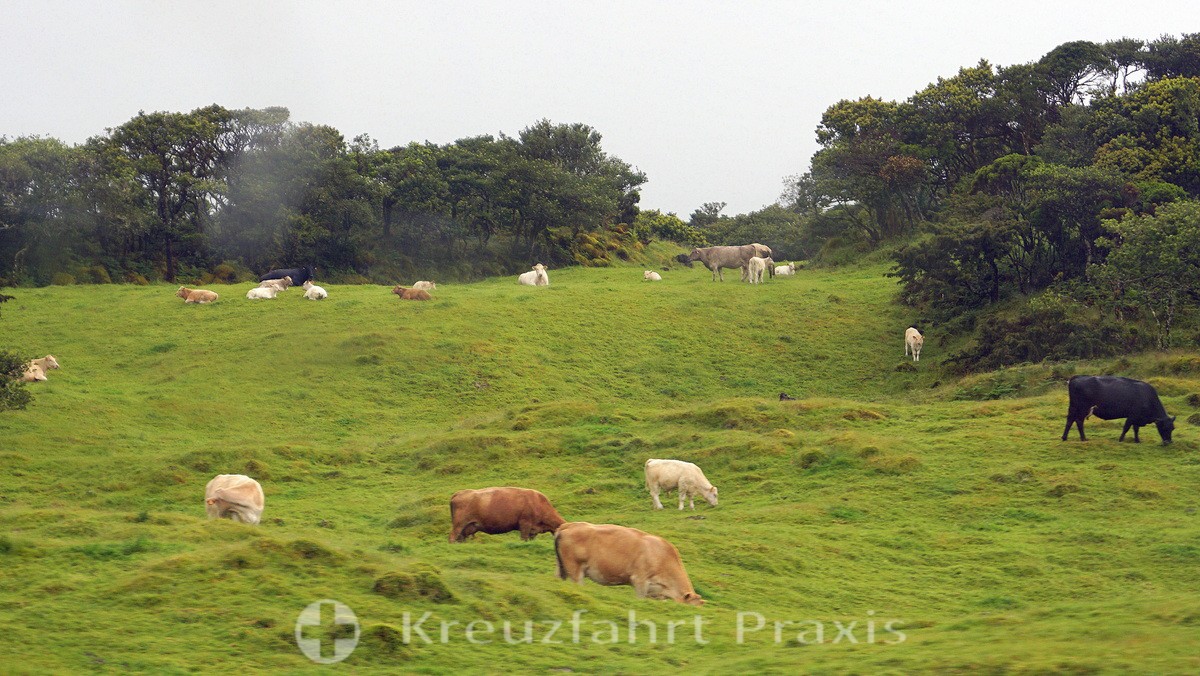 Pico / Azores - cattle on the plateau

Pico has a long whaling tradition that can be seen all over the island. The wine-growing landscape, which was included in the UNESCO World Heritage Site in 2004, is just as famous. There are well-developed hiking trails on the island. The ascent to the Pico is one of the most demanding tours. It is particularly worthwhile on a clear day because you have a fantastic view over Pico and as far as the neighboring islands of Faial and São Jorge.

The vineyards below the Pico volcano in the west of the island have been a UNESCO World Heritage Site since 2004. The most famous areas are near Criação Velha and Santa Luzia. The Verdelho grape in particular is grown on the fertile lava soil. To protect against the salty sea air and also to have the lava rubble out of the way, the small cultivation areas were framed with walls made of lava stones. Pico's vineyards are among the largest networks of stone built by man. 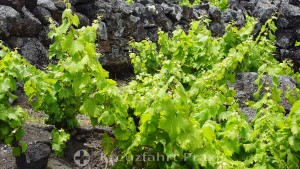 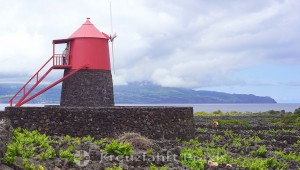 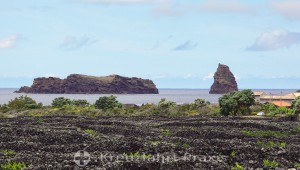 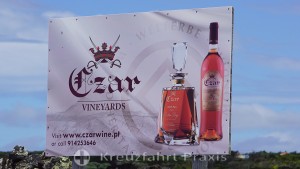 It is arduous to grow, but the wine is good. On the island, people like to advertise that pico wine was delivered to the Tsar's court in St. Petersburg as early as the 19th century.

The Wine Museum is located in the former Carmelite Order in Madalena. The cellar and distillery can be visited. Further exhibits can be seen in the spacious garden. The eye-catchers there, however, are the beautiful old dragon trees. 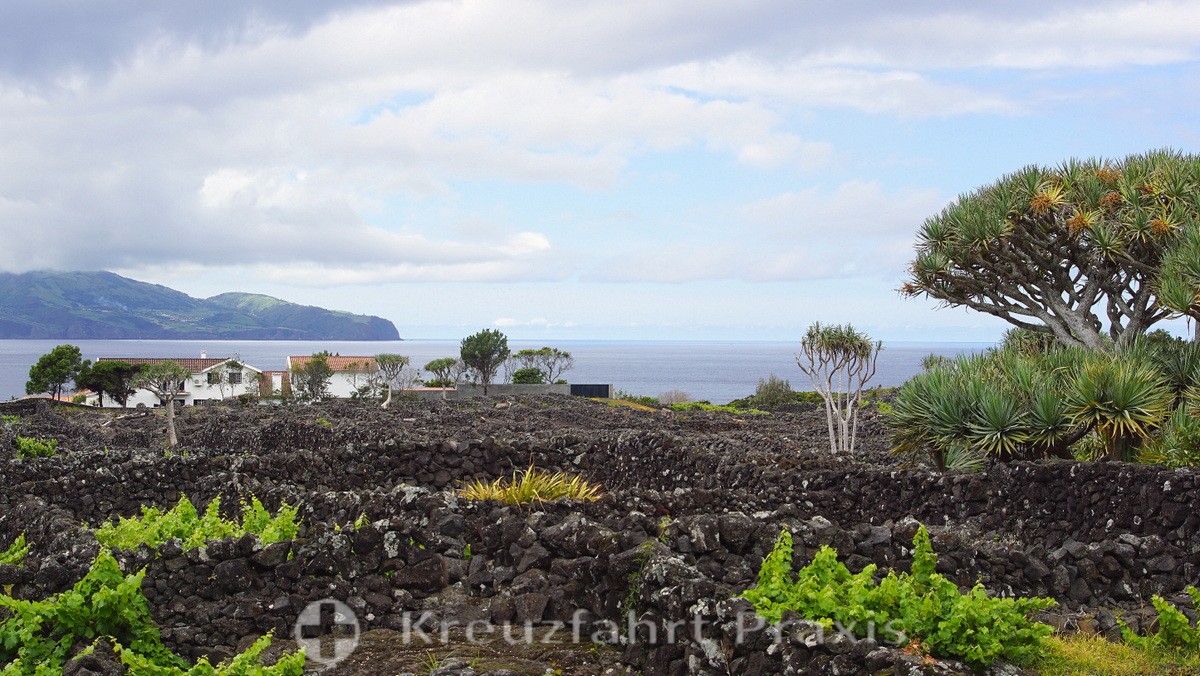 Museu do Vinho do Pico 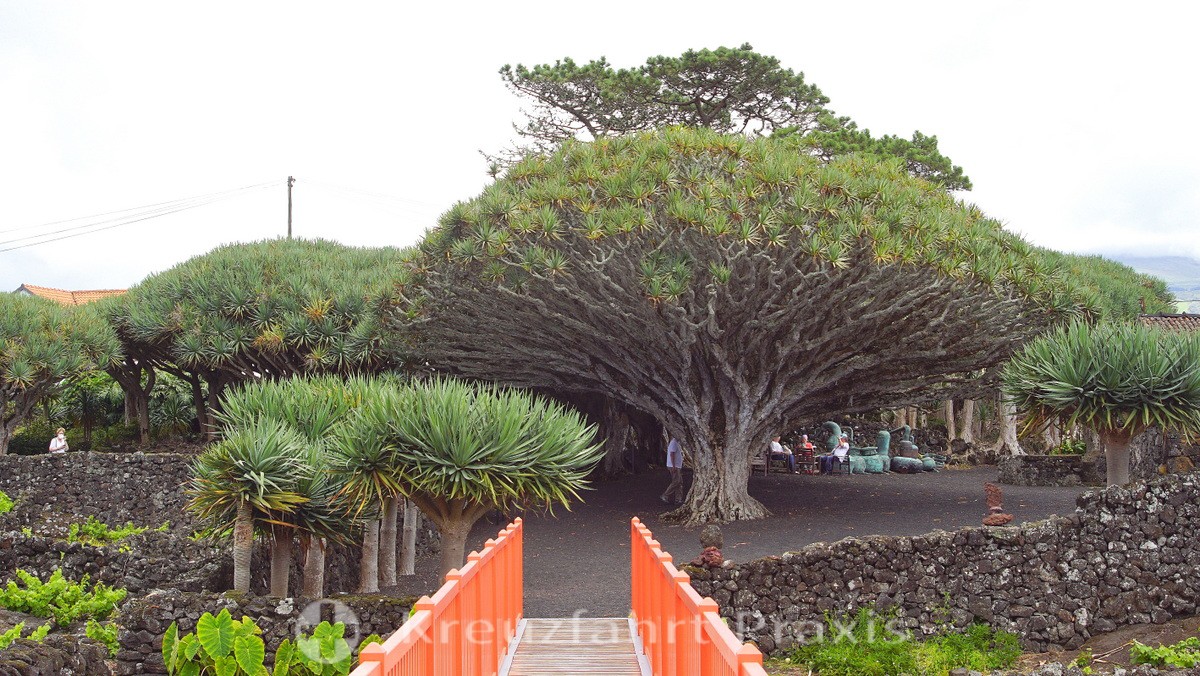 Dragon trees in the Museu do Vinho do Pico

From the mid-19th century to the 1980s, whaling was the island's main source of income. Pico has two whaling museums. One is in São Roque, the other in Lajes in the old warehouse of the whaling boats. The higher-lying vigias are something special. The angular white towers were used as lookouts during the whaling period.

Even today, the observation boats are guided by the whale lookout located higher up. Pico is the center for whale watching in Europe. So far, more than 20 species of whales have been spotted in the waters around Pico. Tours start in the ports of Madalena and Lajes. 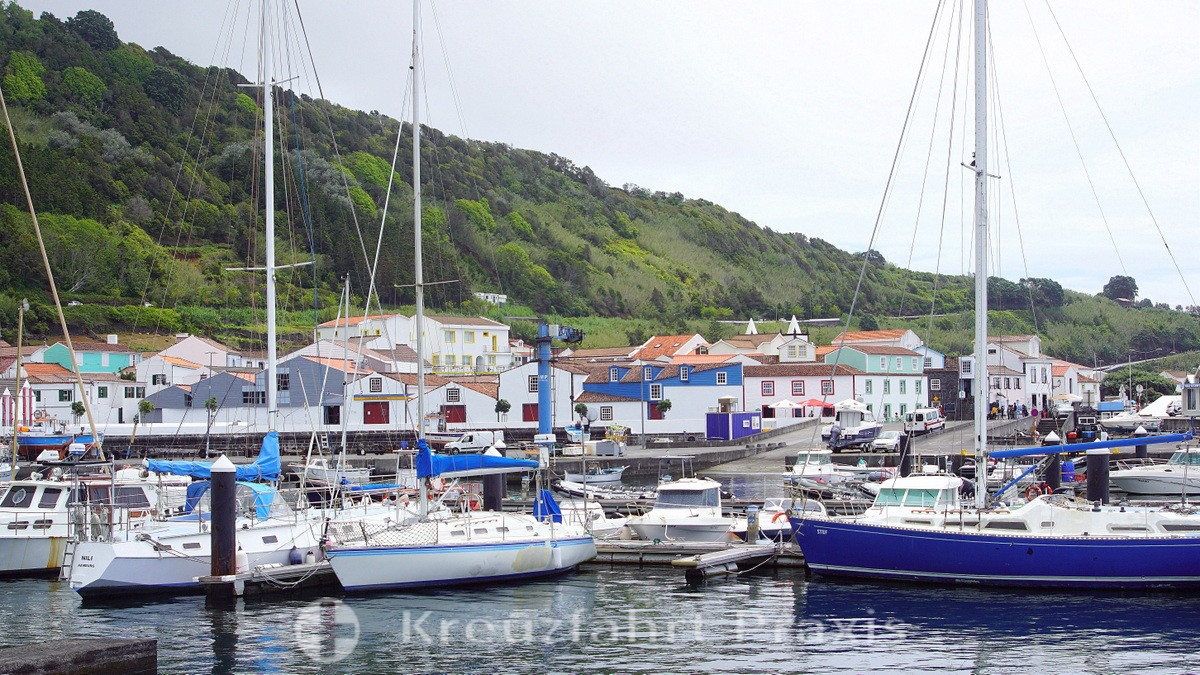 Marina of Lajes do Pico

In several volcanic eruptions, the lava flow created underground caves and tunnels. At around five kilometers, the Gruta das Torres is one of the longest lava tunnels in Europe. The grotto offers stalagmites, stalactites and interesting cave formations. The subterranean world made of lava can be visited on guided tours.

This rugged landscape of lava is located on the Mourato Coast. The sea flows through grottos, tunnels and rock arches. Stairs, paths and platforms have been carved into the lava rocks, from which one can watch the wild spectacle well. 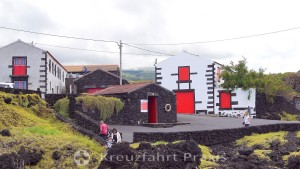 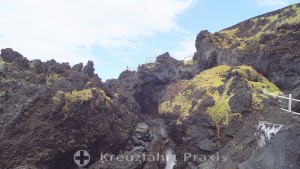 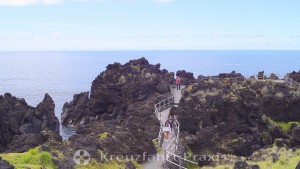 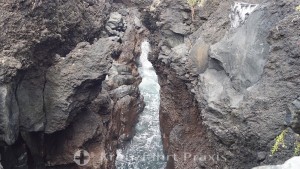 The highlands of Pico

The hilly highlands extend from the Montanha do Pico to the east of the island. Several lakes in former volcanic craters loosen up the green natural paradise. A hiking trail connects the lakes. The Lagoa do Capitão is particularly beautiful at an altitude of 800 meters. It is located near the panoramic road from Lajes to São Roque. 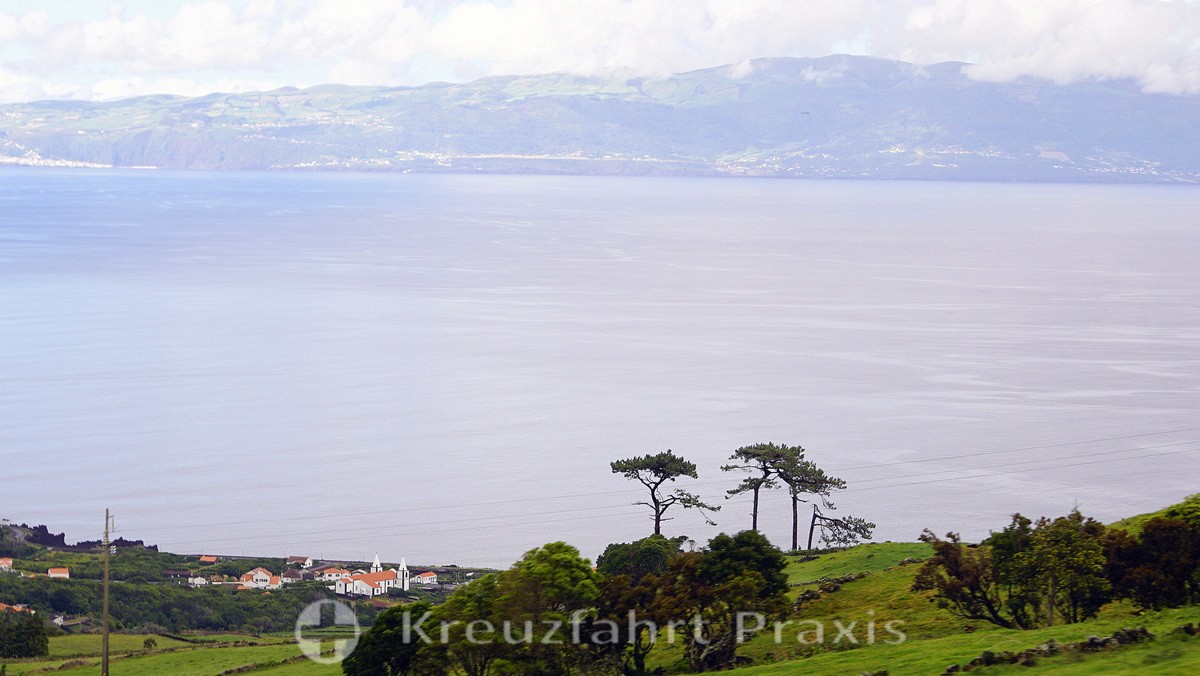 In June 2021 we will be in the roadstead with the WORLD VOYAGER in front of Lajes do Pico. Due to the Covid-19 pandemic, we are only allowed to leave the ship in groups for joint shore excursions. We decide on a bus tour along the coast and then across the island with stops at several sights. A visit to a winery is also on the program.

We tend to the small port of Lajes do Pico. We drive clockwise along the coast to São Mateus. There we visit the parish church. 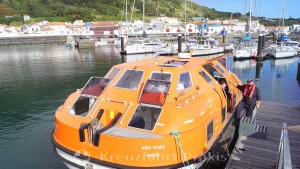 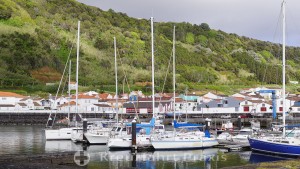 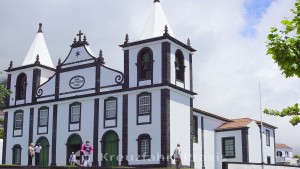 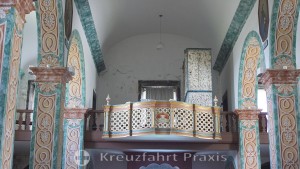 Next time we stop in Criação Velha. This wine-growing region is located in the Parque National do Pico and is a UNESCO World Heritage Site. We take a walk through the vineyards, protected by stone walls made of lava, to Moinho do Frade. The picturesque red mill is already close to the sea. Opposite we see Faial, to the right in front of us the town of Madalena and in front of it the rocky islands of Ilhéu em Pe. 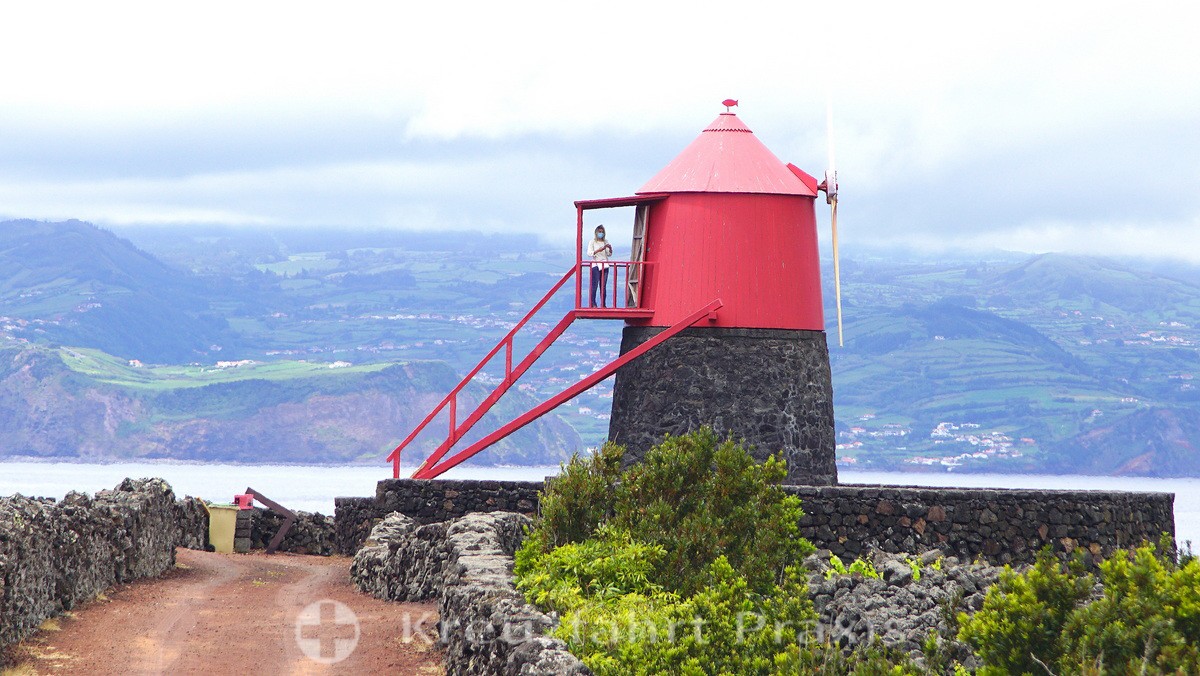 The windmill in the Criação Velha wine region

The Museo do Vinho in Madalena is our next destination. The wine museum is located in the former Carmelite monastery. The exhibition is worth seeing. However, the garden with old dragon trees and a pavilion with a sea view is particularly beautiful. 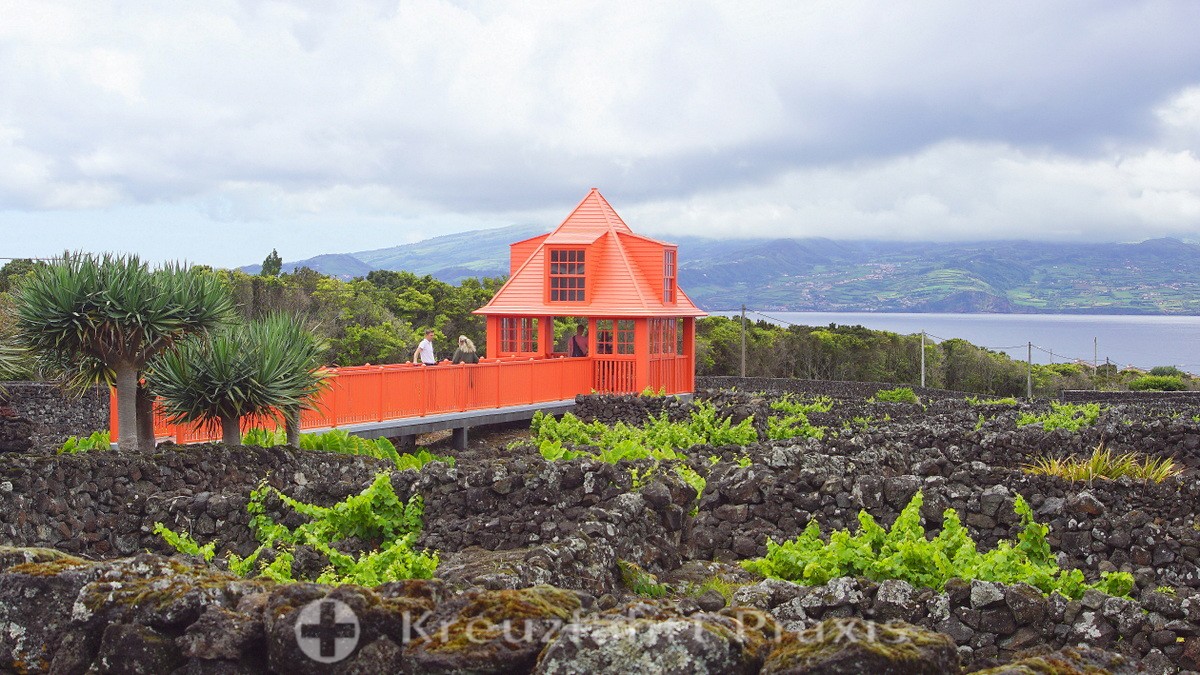 Pavilion in the Museu do Vinho do Pico

We follow the coastal road north to Cachorro. The wild lava formations are impressive. We climb deep into the area via stairs and paths and are rewarded with beautiful views.

We continue to Santo Antonio. A wine tasting is waiting for us in the Adega "A Buraca", a small winery. We are also allowed to try different brandies typical of the island. Cheese and sausage from their own production are served with the wines. A small museum and a shop selling handicrafts are part of the Adega. We can't resist and buy a little lava sperm whale as a souvenir of Pico. 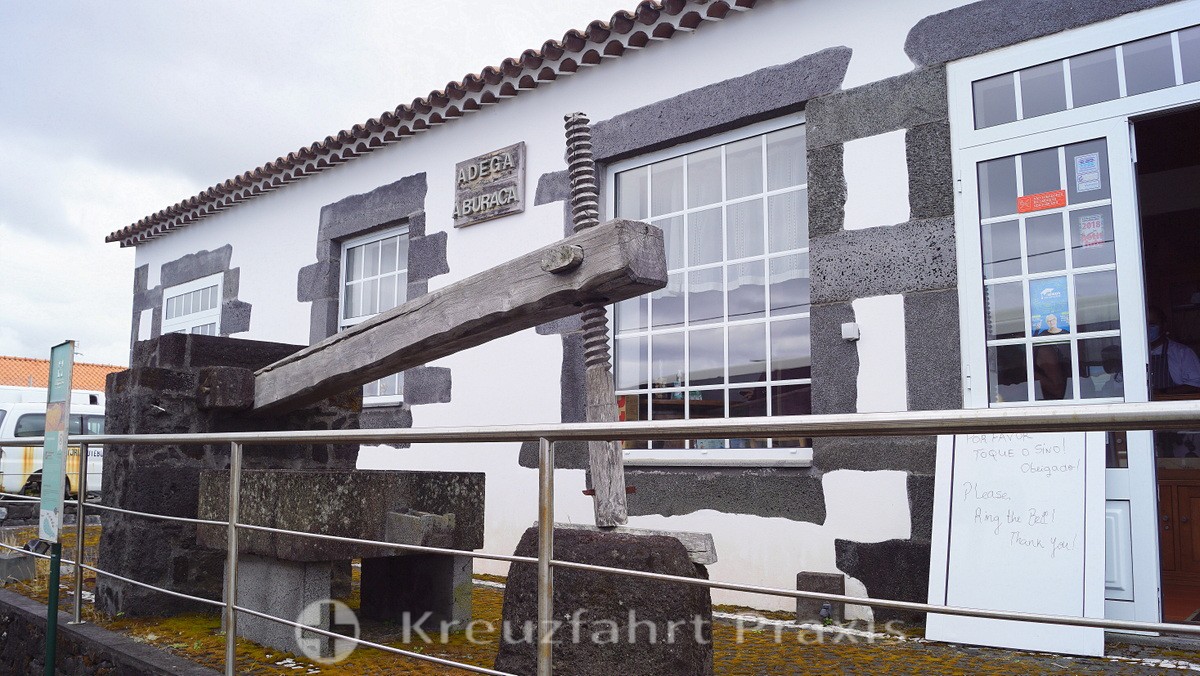 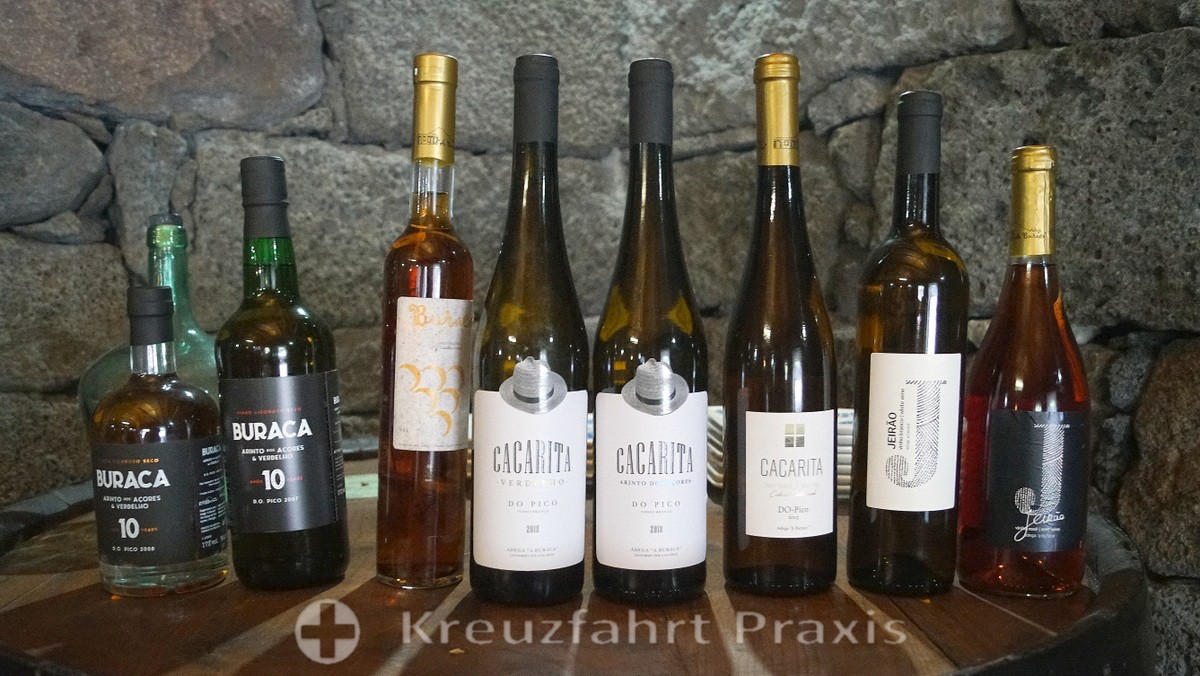 Pico / Azores - products of the Adega A Buraca

At São Roque do Pico we turn onto the highland road. It goes through the green hills back to Lajes. And suddenly we also see Pico, who successfully hid behind clouds all day long. 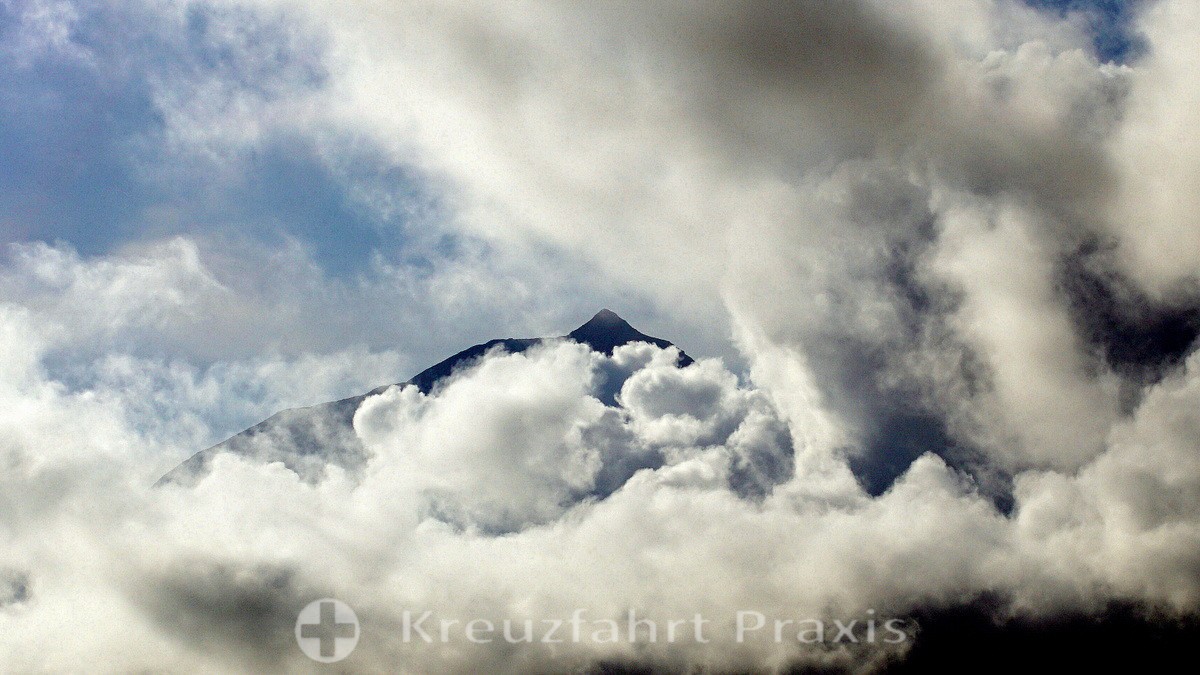