On May 14, 2016 the Azamara Quest the port of Haifa. We reach the third largest city in Israel in the early morning hours. The cruise ship stays in the country's most important seaport for a day and a half. As luck would have it, the first day of visiting Haifa falls on Shabbat, the seventh day of the week. Believing Jews do no work on Shabbat; It is accordingly quiet on land.

Many of our fellow travelers take part in organized tours to Jerusalem, Nazareth, Galilee or Bethlehem despite the day off. In contrast, we are drawn to Akko, which is only 25 kilometers away. We are particularly interested in the old town, which lies on a promontory and is enclosed by huge fortress walls. 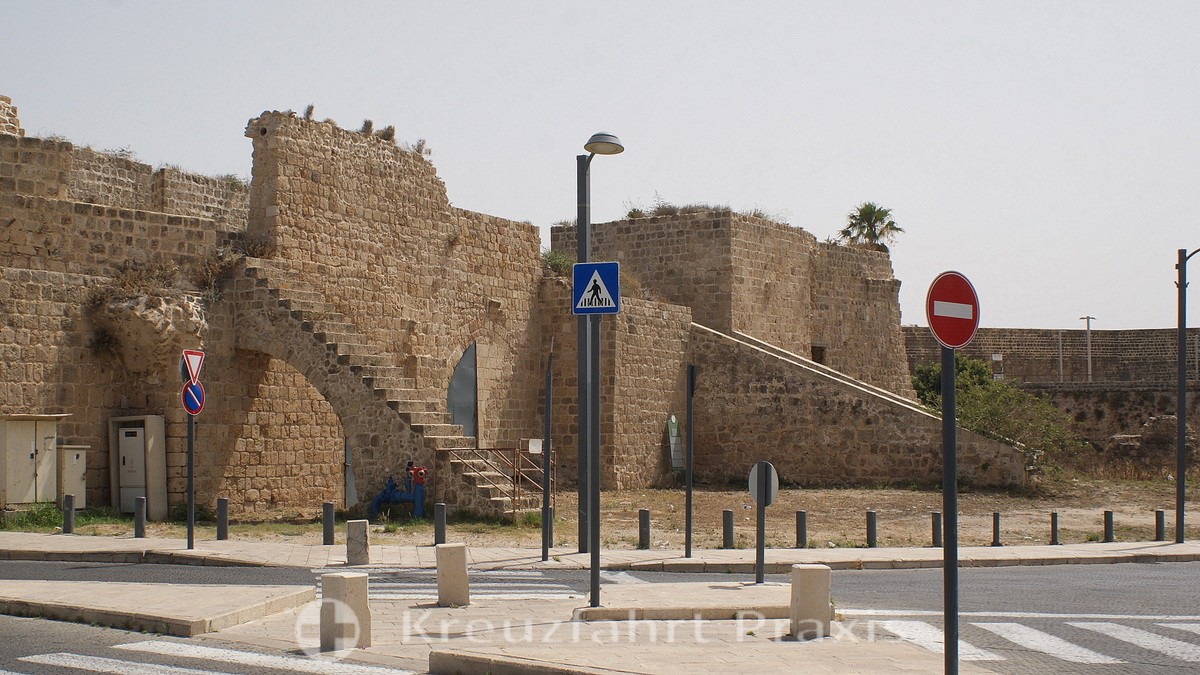 The origins of the city probably go back to the 3rd millennium BC. Confirmed knowledge is available about the period of Arab rule. It lasted from 638 to 1104 AD. At that time, the port on the eastern edge of the Mediterranean was expanded and Akko was secured by fortifications. In 1104 the crusaders who were pushing into the Holy Land conquered the city and its strategically important port. For the conquerors, Akko was the gateway to the Holy Land. The fortifications were strengthened above and below ground. In addition, the city developed into a prosperous trading center under the rule of the knights. The time of the crusaders ended in May 1291 with the conquest of Akko by the Egyptian Mamluks. Akko has been Israeli territory since 1948. The old town has been part of the UNESCO World Heritage Site since 2001. Akko is predominantly inhabited by Israelis of Arab origin. 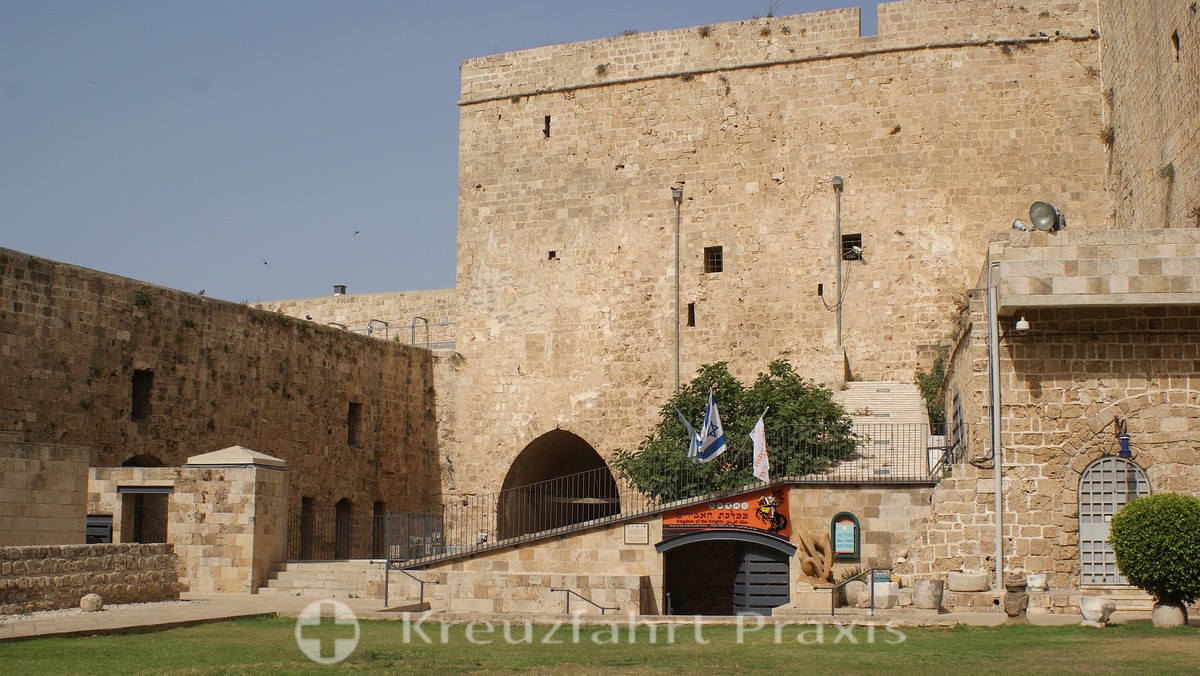 The Palace of the Crusaders

The citadel of Akko, created by the military-monastic order of Hospitallers, has remarkable dimensions with an area of ​​8.300 square meters. Parts of the palace were uncovered in 1930. Further discoveries and systematic excavations followed in the 1960s. More than half of the 5.000 square meter area has been developed so far; Work is still in progress on buried areas. A magnet for visitors is the underground palace of the crusaders, known as the "commandant's office". Visitors to the facility follow a recommended route using an audio guide, in which animation clips are embedded and which opens up the following waypoints one after the other: 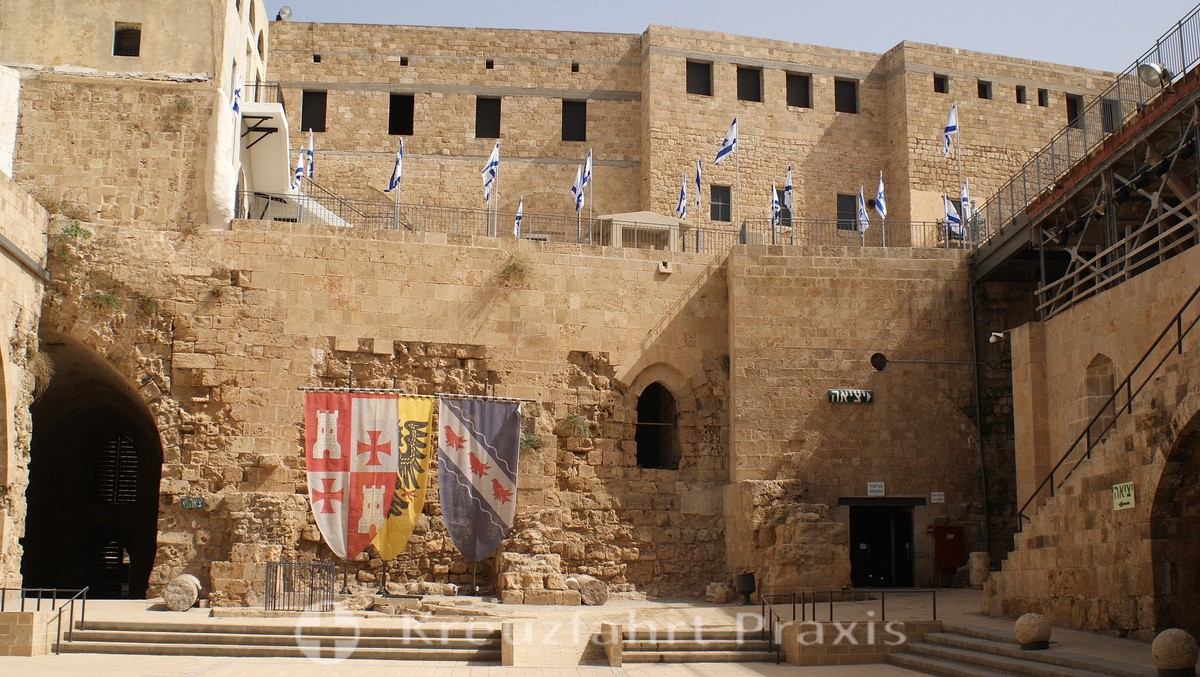 Palace of the Crusaders - Burghof

Located two and a half meters lower than the adjoining halls, the windowless and lightless room, carved out of the rock, looks like a terrible place. Dozens of square openings for fastening metal hooks under the six to five meter high cross vaults suggest that prisoners were chained there. 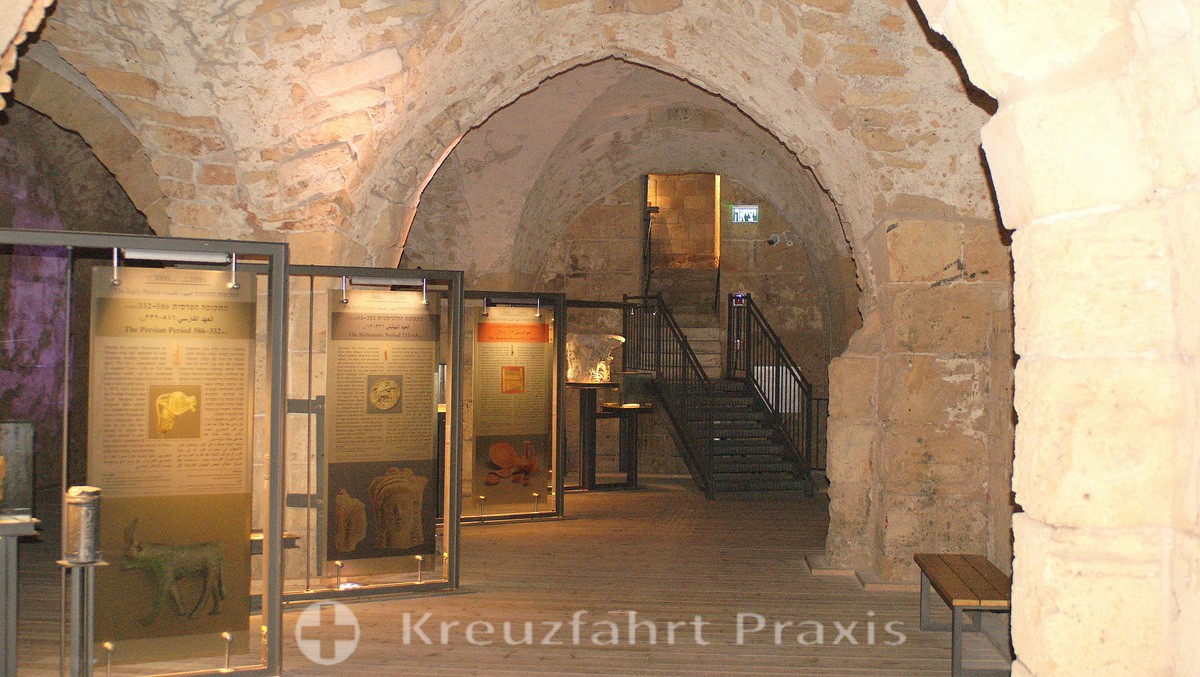 The tour leads from the prison through the "Eastern Street" to the beautiful hall. Scientists speculate that the hall served as a reception room for the newly arriving crusaders and pilgrims in Akko. Finely worked sandstone and elaborately decorated windows make the room appear friendly. 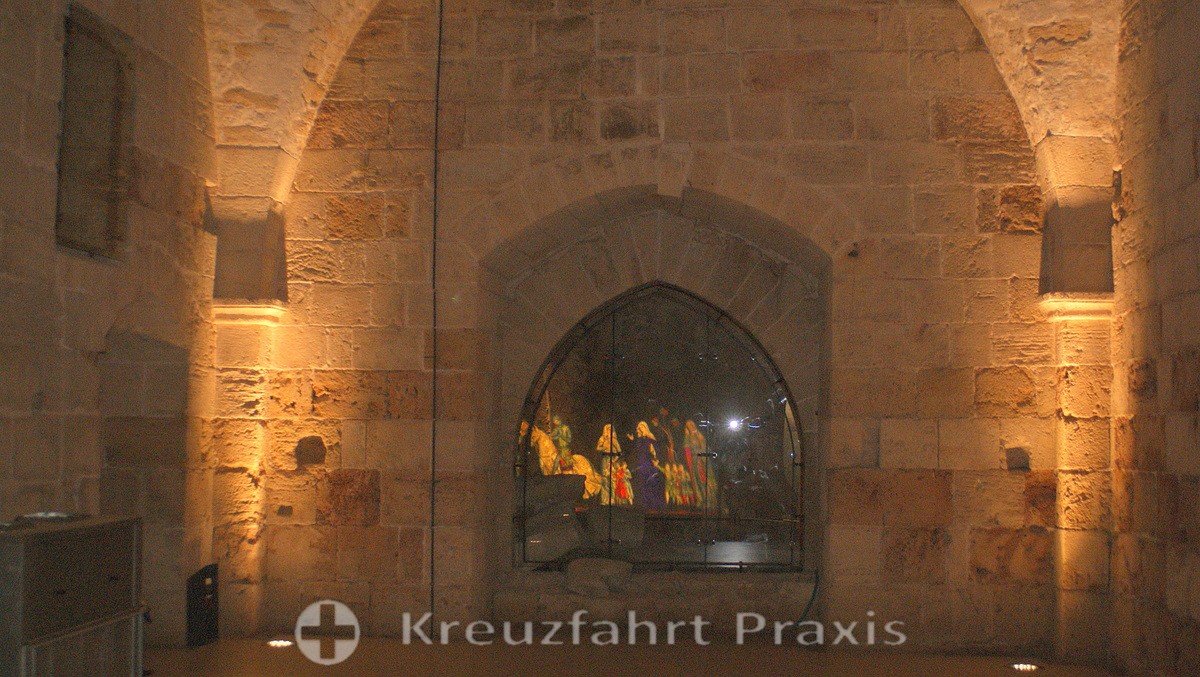 Through the extensive crypt of the Church of St. John and via the “Südliche Straße”, visitors enter a hall that was apparently used as a dining room. Three stone columns, each three meters in diameter, support a total of 10 meters high pointed arches. Parts of the refectory were carved out of the rocks. 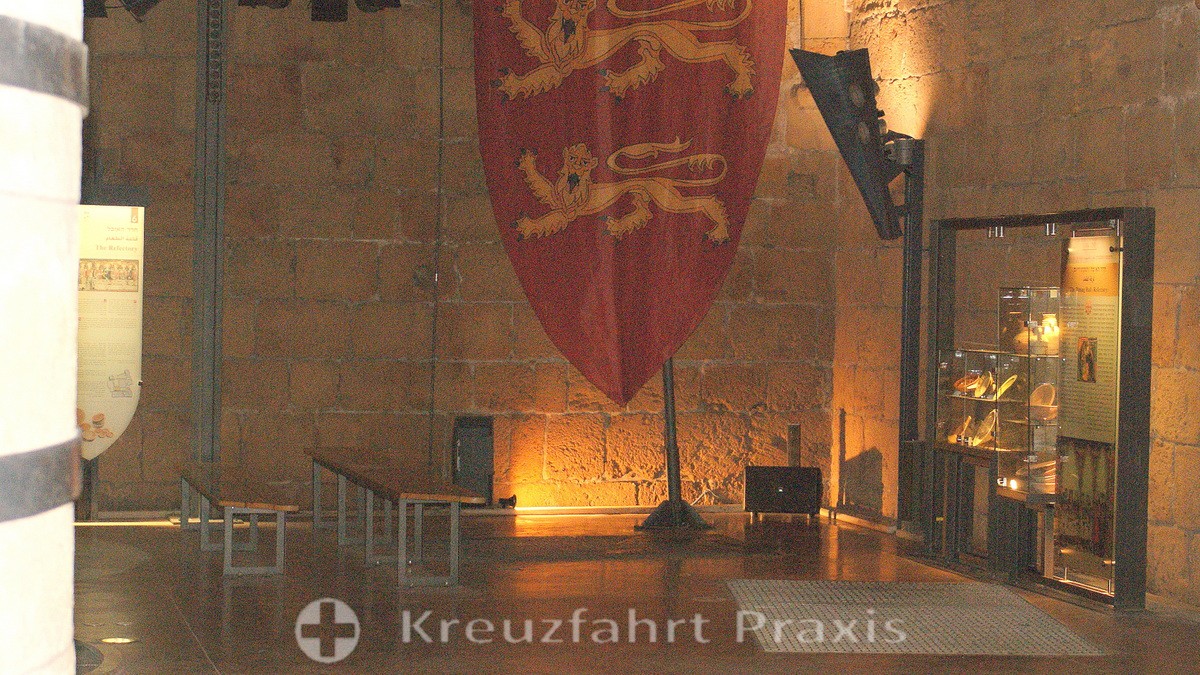 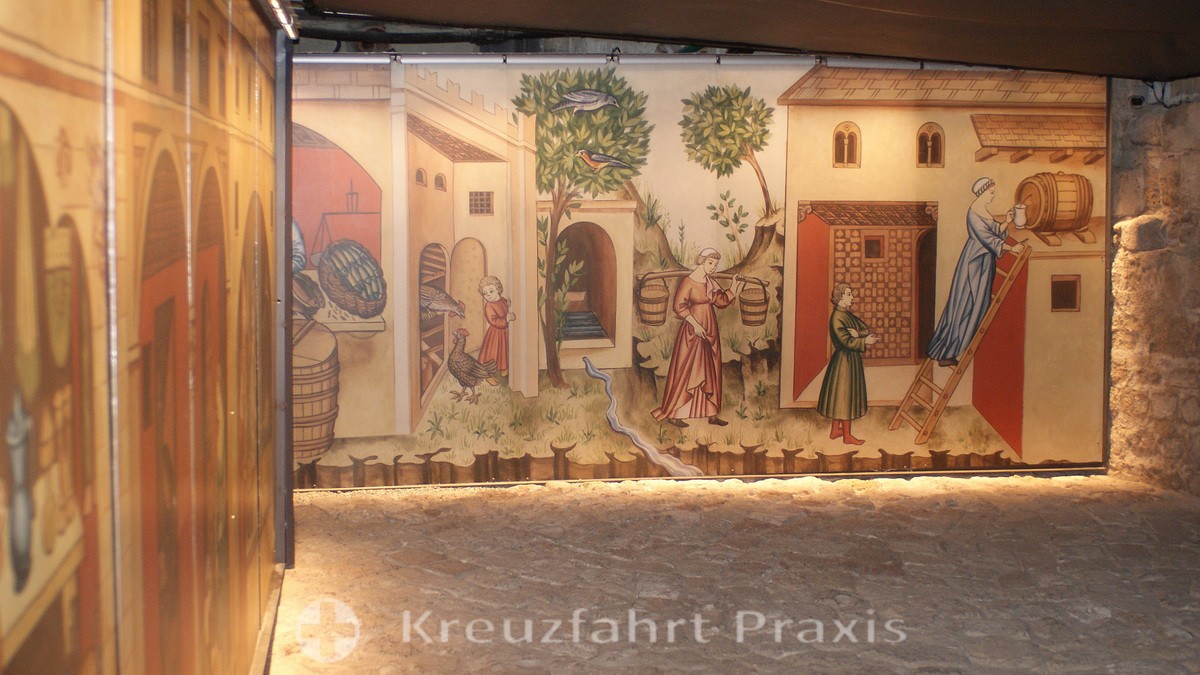 The uncovered central courtyard measures 1.200 square meters. Walls with enormous arches border the courtyard. It is assumed that the open area served as a parade ground for the crusaders.

The north-western tower with the public, two-storey toilet facility connects to the central courtyard. It offered space for 32 knights and servants at the same time. It's hard to imagine today, but the crusaders shouldn't have been squeamish. The room had a sewage system flowing into the northern city moat; Ventilation openings were also thought of at the time. 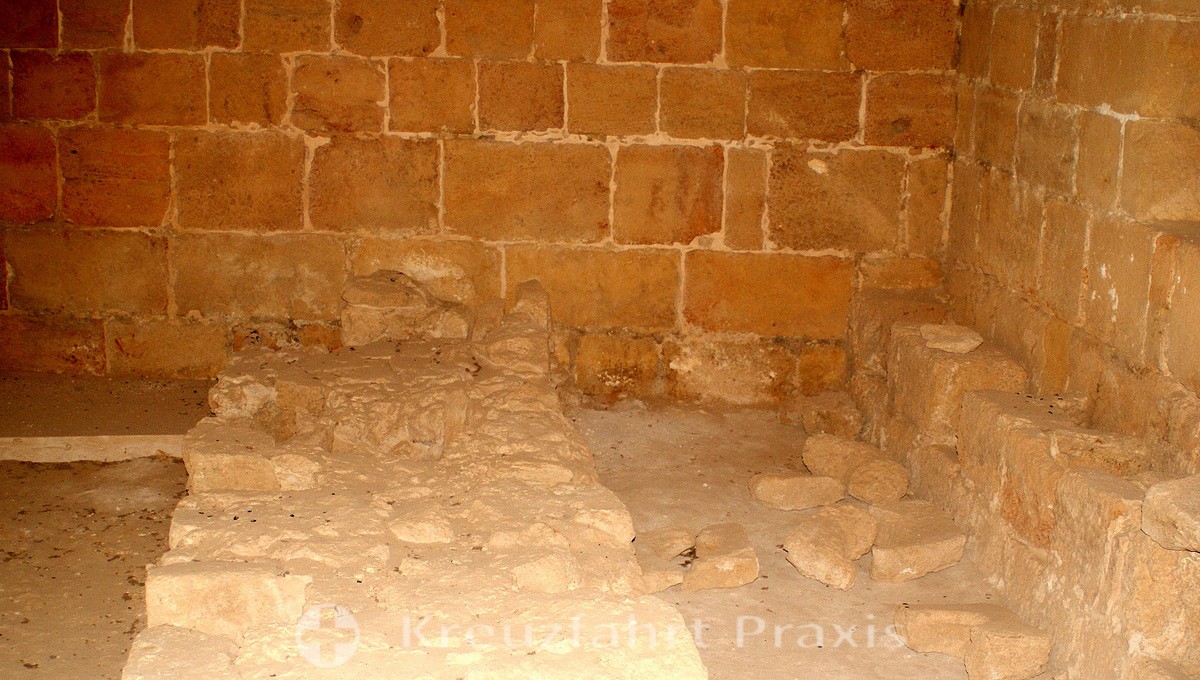 The 1.300 square meter hall supported by an eight meter high cross vault originally served as a meeting and storage room. Square pillars support the vault. In the hall, handicrafts are sold at several stalls. 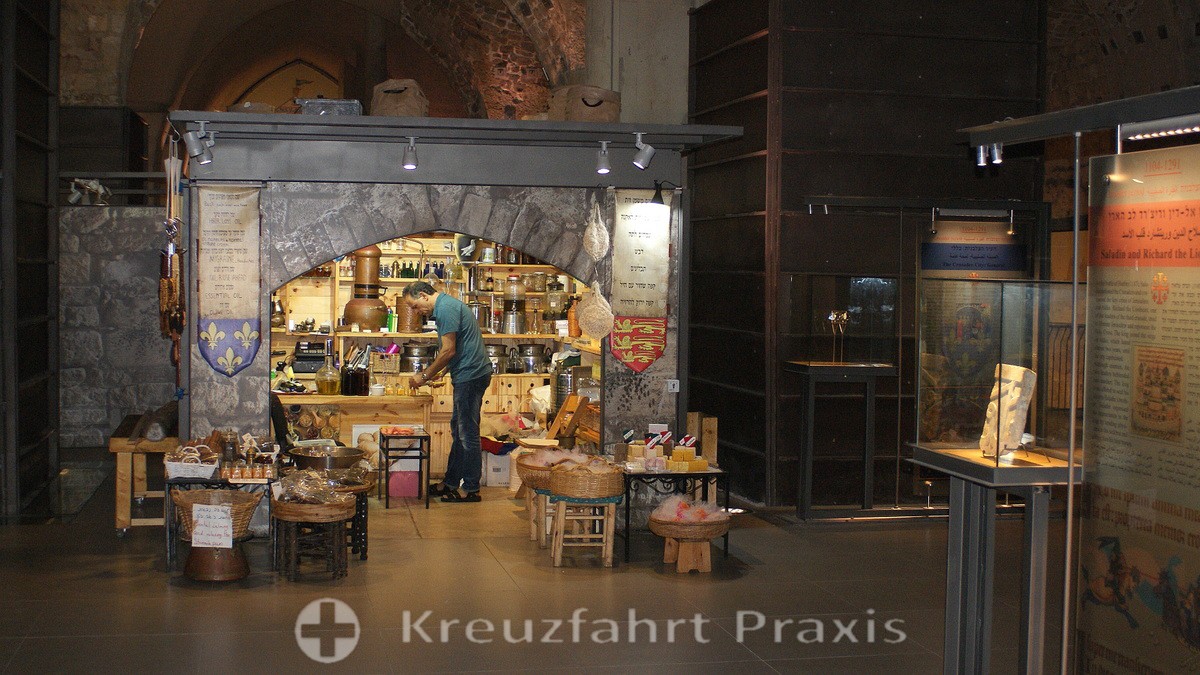 Handicrafts in the pillar hall

The north wing of the fortress was built next to the city wall. Partition walls with arched openings divide the spacious hall into six separate areas. The barrel vault reaches a height of ten meters, and the brickwork bordering the city wall is 3½ meters thick. 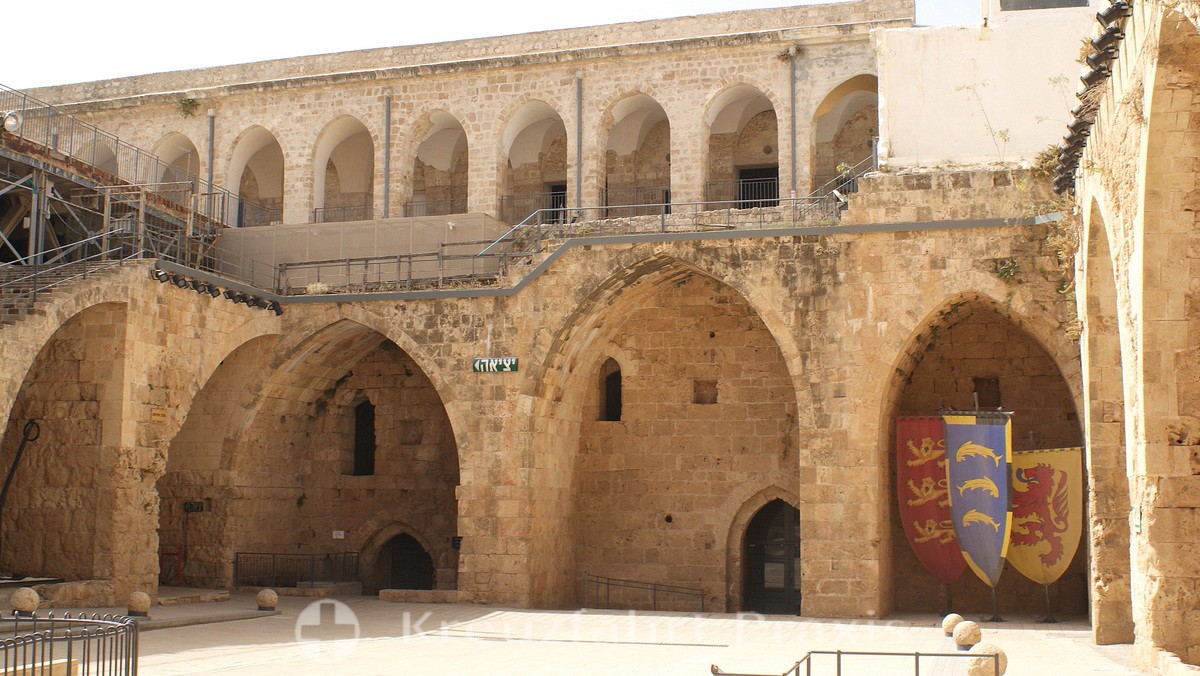 Castle courtyard with the knights' halls

The hall of the sugar bowls

This building complex has three floors. There is a cistern and workrooms on the lower and upper floors. In between is the actual seven meter high sugar bowl room. The Order produced cane sugar in Akko and kept the product in hundreds of jars in this storeroom. Scientists assume that the production of crystal sugar was a profitable business for the Crusaders. 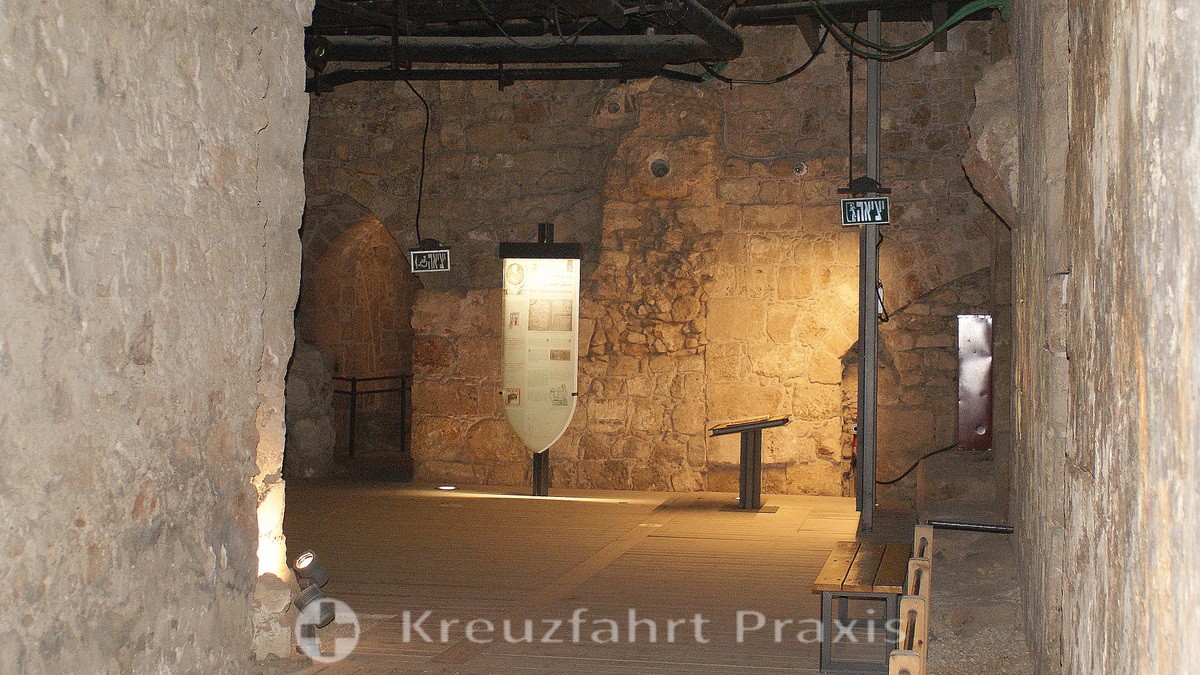 Visit of the underground structures and five other structures outside the fortress Entrance fee in 2016: 40 shekels (10 euros).
The admission price includes an audio guide in German. The visitor's photo ID is retained as a deposit. We find the handing over of personal papers to third parties extremely critical. In Israel, however, one can count on the reliability of the institutions.

In addition to the Order of Hospitallers, refuges were also granted to individual Italian city-states in Akko. As a result of the siege and capture of Jerusalem by Saladin's troops in 1187, the Knights Templar moved to Akko. They built their fortress area in the southern part of the old town. The Templars were a military-monastic order that united the models of noble knighthood and monks. On behalf of the Pope, the brothers supported Palestine crusaders visiting the holy places. 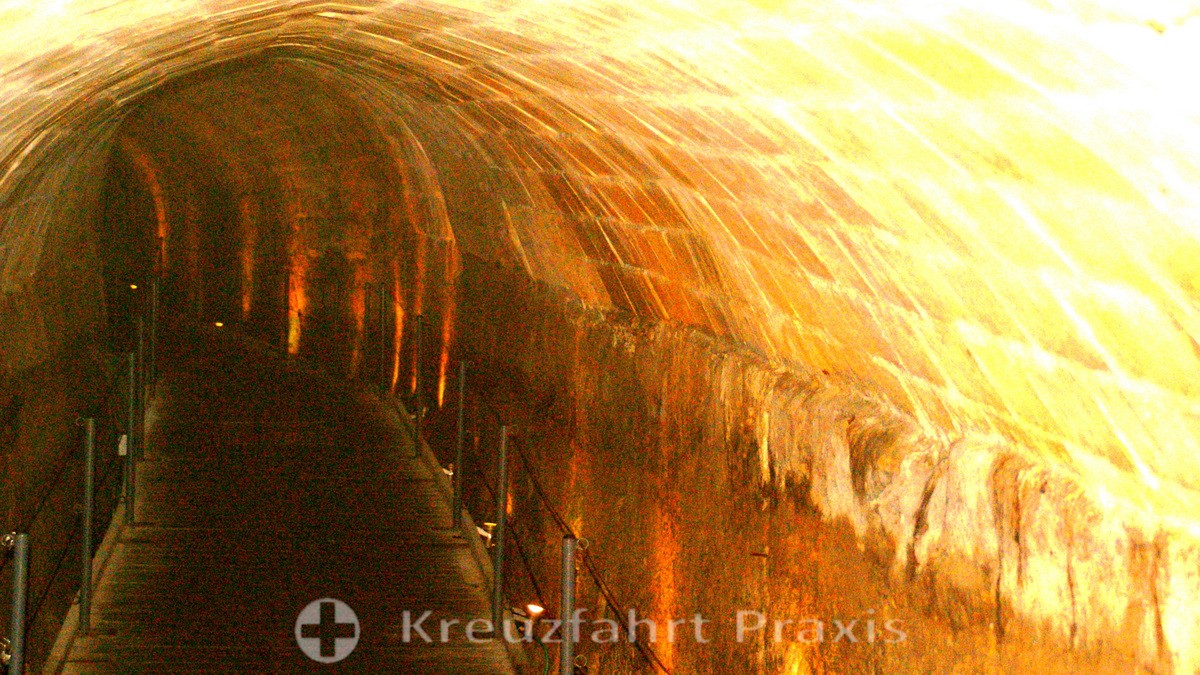 The Templars built a fortress with two towers. The walls of the fortress were 8½ meters thick. This citadel was the best secured structure in Acco. Independently of this, the order built an escape tunnel between the fortress and the port. The structure, which was only rediscovered in 1994, is 350 meters long and the entire length of the tunnel has been accessible since 2007. The lower part of the tunnel was cut into the rock, the ceiling forms an arched vault. With the help of short animation clips, visitors to the tunnel are given an impression of what life was like in Akko at the time of the Crusaders. Individual areas of the structure appear very low and narrow. People suffering from claustrophobia should rather avoid the tunnel.

Akko has always been secured by fortress walls. The eye-catching outer fortifications were commissioned by the Ottoman rulers after the crusaders were driven out. They were strong enough to withstand the siege by Napoléon Bonaparte's troops in 1799 and the Egyptian ruler Muhammad Ali in around 1830. 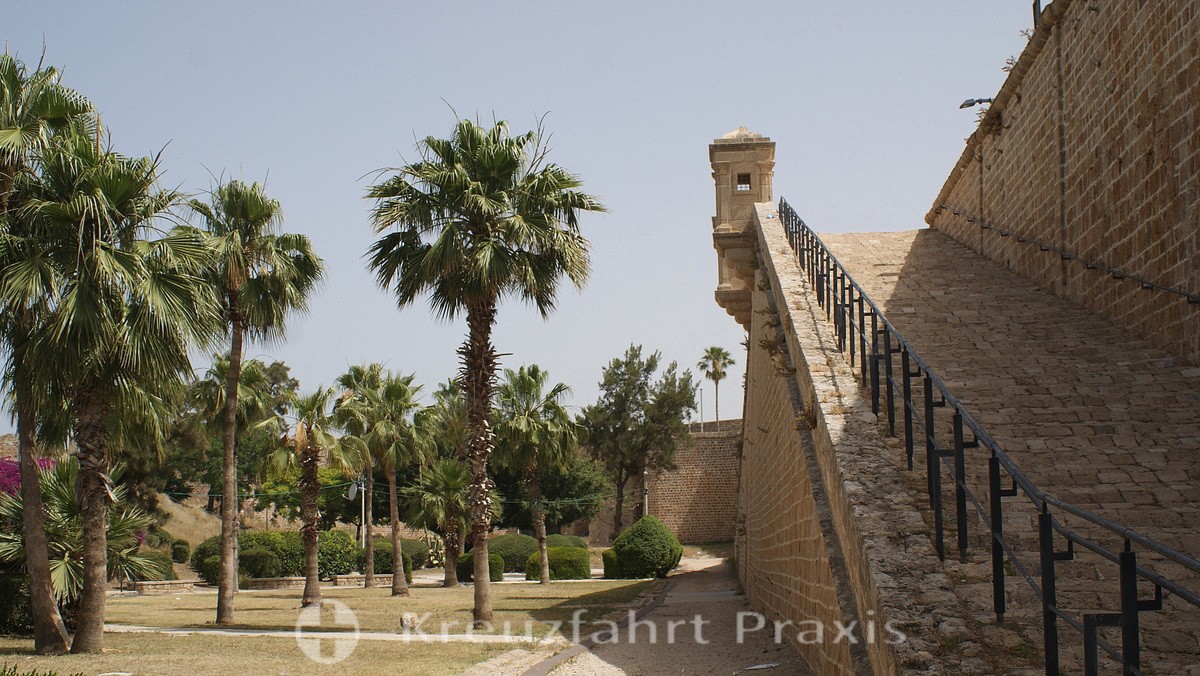 The city wall is accessible. We recommend the section between the lighthouse and the harbor. The path leads past the St. John's Church. The north-eastern city wall near the citadel is also easy to walk through. It offers good views over the city.

Akko's most important mosque was built in the Ottoman period between 1775 and 1801. The sanctuary is the largest mosque built outside of Jerusalem. Incidentally, it is considered one of the most beautiful Muslim houses of worship in Israel. Dozens of study rooms of the adjoining madrasa are grouped around the spacious inner courtyard. 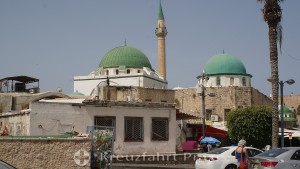 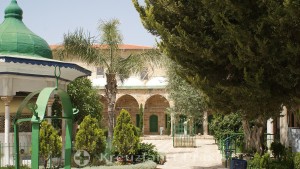 The caravanserai is a two-storey structure with a large inner courtyard. The construction is dated to the year 1782. The first floor was occupied by the port's customs house and the dealers' storerooms. The caravanserai's guest rooms were on the upper floor. Granite columns stolen from ancient sites surround the courtyard. The clock tower on the north side dates from 1906. 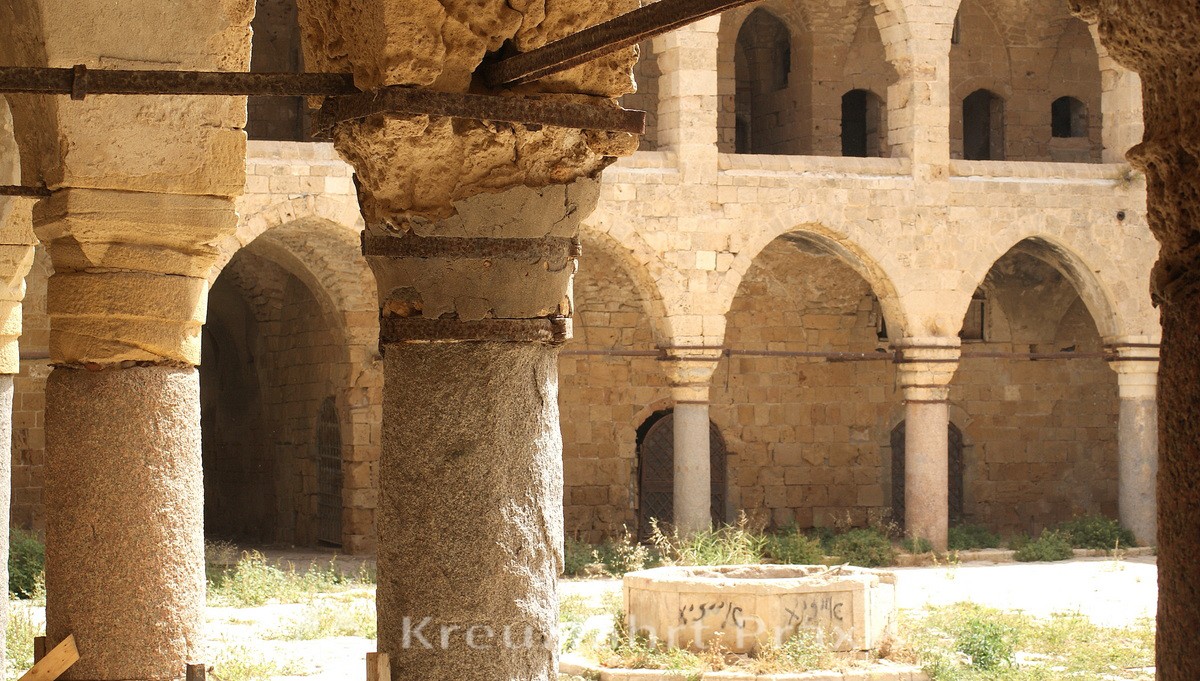 Construction of the covered Turkish bazaar began towards the end of the 18th century. Then as now it is used by the predominantly Arab-born Israeli residents of the old town as a market for their daily needs. The bazaar is a picturesque establishment with many shops and small restaurants. 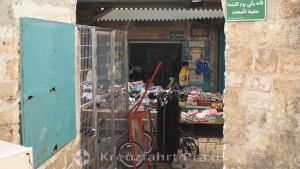 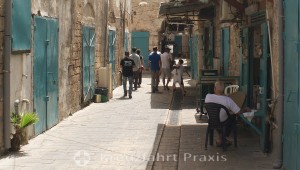 The ancient port of Akko was already in the area of ​​today's marina. In ancient times it was the most important port in Palestine. It was built around the 3rd century before the beginning of the era. Its basic shape has been preserved to this day. In the Middle Ages Akko was the most important port for the Crusaders. The supply of goods, the supply of soldiers and the stream of pilgrims ran through it. 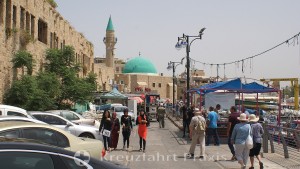 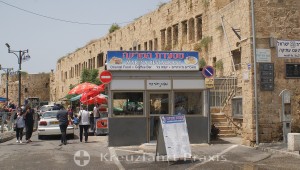 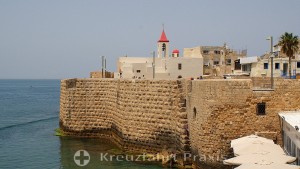 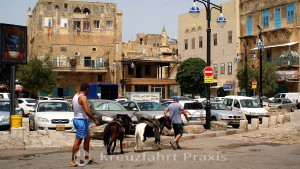 The best way to travel to Akko

Thrifty travelers visit the city by train. The train, which runs regularly from Haifa to Akko, stops opposite the cruise terminal on weekdays. In 2016 a single ticket cost 13,50 shekels (equivalent to 3,00 euros). The fare is to be paid in shekels.

On Shabbat days, however, rail traffic is idle until dark. It is advisable to use the services of taxi drivers of Arab origin on these days.
The prices requested in 2016:
The taxi ride from Haifa to Akko and vice versa is charged on Shabbat days with the night tariff of 141 shekels (33,00 euros). A taxi to Akko normally costs 125 shekels (29,00 euros). We used the service on Shabbat and paid for one trip in euros and the other in US dollars.

The memory of the Crusaders lives on in Akko. In the closed old town, visitors experience the Middle Ages up close. Jews, Arabs and Christians live peacefully together in Akko's old town. A trip to Akko is highly recommended.