On a Shabbat day in May 2016, our cruise ship lays the Azamara Quest, arrives at Haifa's cruise terminal in the early morning. Haifa is the third largest city in the country, Israel's most important seaport, an important industrial location, university city and much more. For a day and a half we can discover the city and its surroundings. Haifa is one of the most beautiful cities in Israel. More than 400 people live in the city on the east coast of the Mediterranean between the Bay of Haifa and the steep, up to 285.000-meter-high slopes of the Carmel Mountains. It is less than 50 kilometers to Nazareth, the home of Jesus Christ, and about 60 kilometers to the west of the Sea of ​​Galilee.

Cruise ships with the destination Haifa offer their guests trips to the historical, biblical sites. These include tours to Jerusalem, 150 kilometers away, to Nazareth and the Sea of ​​Galilee. We expect that we will not get to know authentic Israel with excursions on Shabbat, the day of rest for believing Jews. That's why we first decide to visit the city of Akko, 25 kilometers away, which was formerly developed into a fortress city by the Crusaders. Mostly Israelis of Arab origin live in Akko who do not rest on Shabbat. You can find out more about the city at Shore excursion to Akko. We spend the late afternoon of the first day and the morning of the following day with two tours through Haifa. In this way we get an overview of the city and its attractions.

Among the sights of Haifa is the German settlement. It goes back to the migration of German Christians who came from Württemberg to settle in Haifa in 1869. There they established a pietistic rural community. Even today, some of the representative stone houses in the district bear German names. In the present, art shops, cafés and restaurants use the district that has become a trendy district.
The German settlement is close to the cruise terminal. The way to the settlement leads from the harbor over a bridge. We follow the main road to the right. Behind the Dagon Silo, an eye-catching 68 meter high building with an attached grain museum, we turn into the gently sloping Ben Gurion Avenue. The settlement is on the right and left of the street. 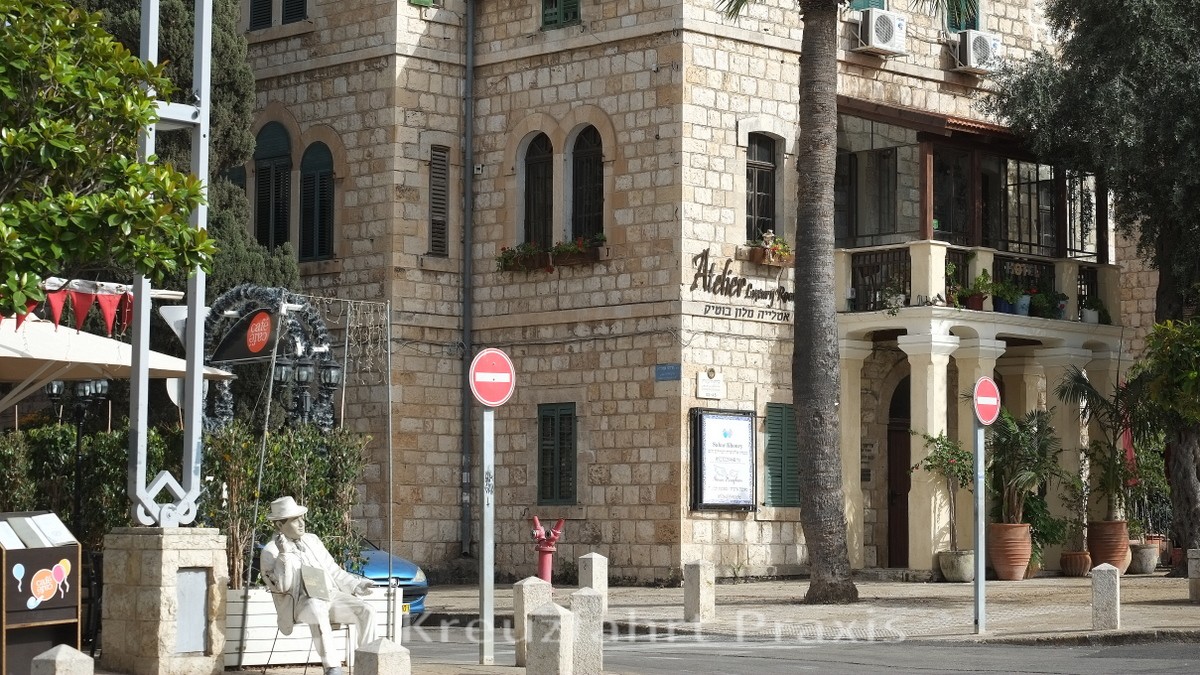 The Bahai Gardens are attached to the German settlement. They extend over 18 terraces up the entire slope of Mount Carmel. The lower area of ​​the gardens borders on UNESCO Square. At UNESCO Square we keep left and follow HaGefen Street. At the height of the Haifa Art Museum in the Hadar district, we reach the Arab business district. It's still Shabbat and the neighborhood is as busy as Akko. The way back to the cruise ship takes us over sloping streets and stairs. On the way in the Hadar business district

Tour II: Louis Promenade and the Shrine of Bab

The shrine of Bab and the associated, uniquely tended complex of the Bahai Gardens, which are spread over 18 terraces, are UNESCO World Heritage Sites. We visit the shrine on the morning of the following day. From the cruise terminal, we walk ten minutes to Paris Square. The landmark is a modern, 29-story high-rise government building called the “Sail Tower”. Haifa center - in the background the Sail Tower

From Paris Square we take the Carmelit subway to the Gan Ha'em terminus in the Carmel district. The journey ends at an altitude of 268 meters. 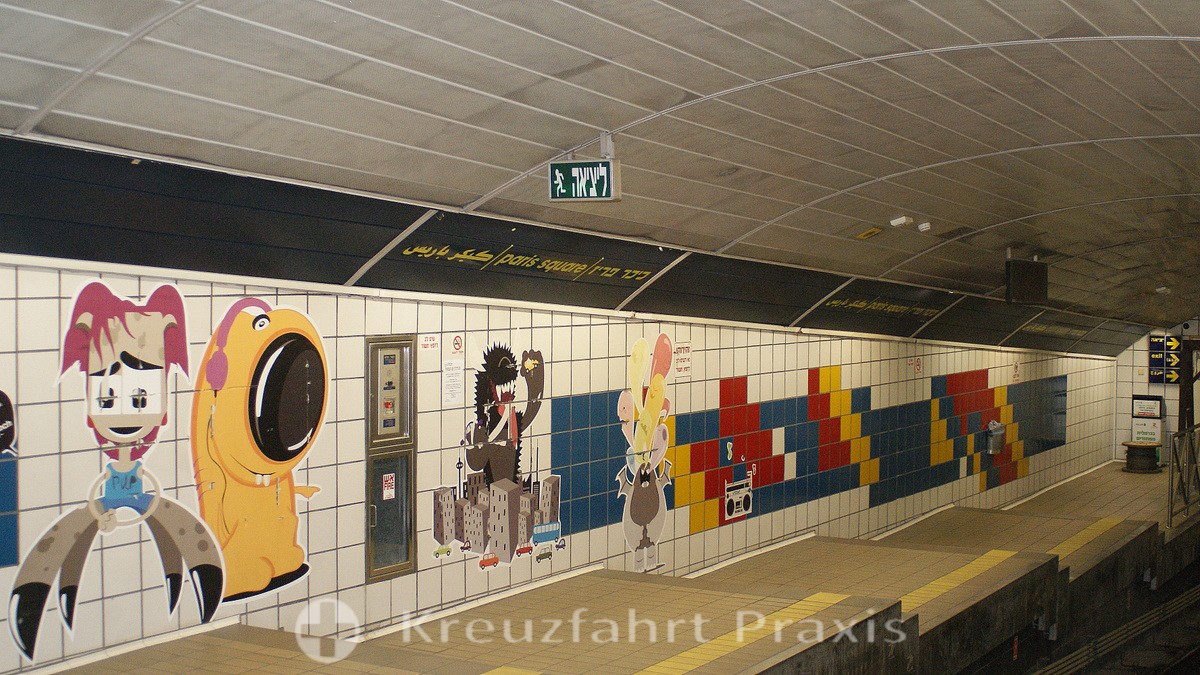 There are no signs to the Louis Promenade at the mountain station, but we can find our way around straight away with the help of the city map in the cruise terminal. On the way to the promenade we pass the zoo, several hotels and the Tikotin Museum for Japanese Art. The view from the promenade is overwhelming. We see the Bay of Haifa, the extensive port facilities, the Bahai Gardens and the shiny golden dome of the Shrine of Bab. All of this is within our grasp. If the air weren't so hazy, we could see all the way to Akko. Just below Louis Promenade, after a security check, we enter the Bahai Gardens and look down from a viewing platform onto the central terrace and the mausoleum of the founder of the religion. We are not allowed to visit the lower terraces and the shrine via the terrace paths. Visits are only offered as part of organized, free tours. We leave the viewing platform and walk outside the Bahai Gardens over steep streets into town. We pass the nearby Stella Maris monastery of the Carmelite Order with the Cave of Elias and the sculpture garden of the German-born artist Ursula Malbin. Beautiful, life-size works of art made of bronze in a public garden testify to the artist's skill. In the middle of the hillside of Mount Carmel, we find the official entrance to the Shrine of Bab. Visitors are only allowed into the exemplary well-tended grounds until noon. We are under time pressure, so we only visit the excellently designed central terrace and inevitably do without visiting the shrine.
The Carmelit subway runs regularly; the journey takes less than 10 minutes.
Fare: One way currently 6,60 new shekels (1,70 euros). Seniors pay less.
Tourists buy shekels on their way to the subway station in one of several exchange offices.
Local transport requires shekels. In contrast, taxi drivers accept US dollars or euros as payment. 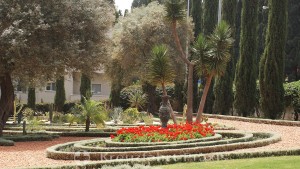 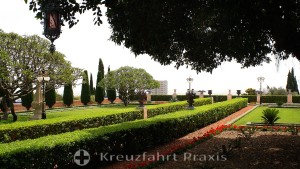 It is no coincidence that Haifa is called the “city of 1.000 stairs”. The city's location on Mount Carmel often makes it unavoidable to walk over steps. That doesn't bother us. Haifa's Tourism Office has devised four different tiered excursions. They start at a height and end in the lower slope area. - The Wadi Nisnas district, one of Haifa's tourist attractions, is one of them. We'll save it for our next stay in Haifa. 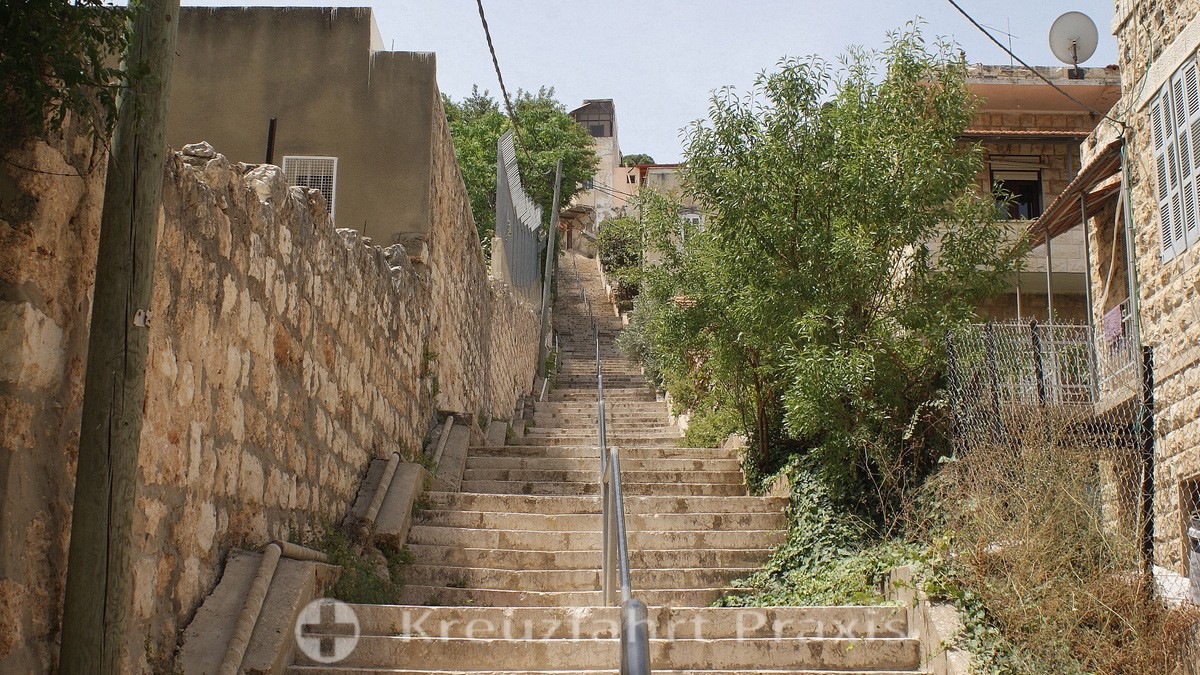 Just one of many - Haifa's stairs