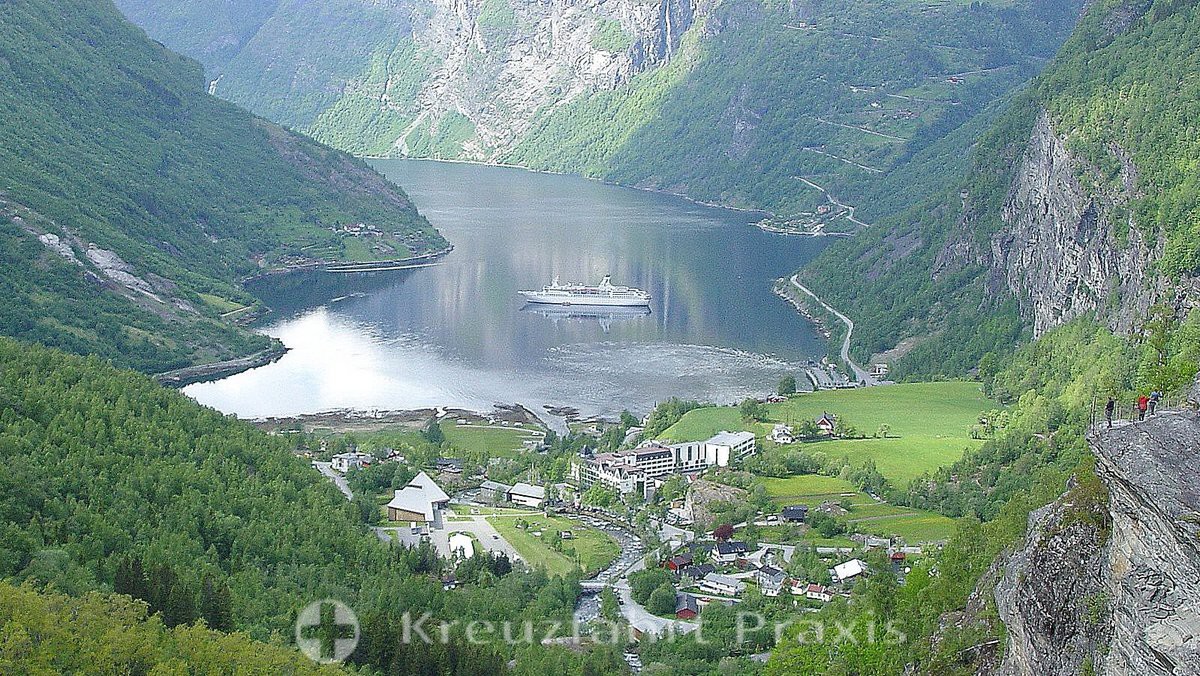 The small town of Geiranger at the end of the world-famous Geirangerfjord is one of Norway's most famous tourist destinations. For centuries, the remote region was only accessible by boat or mule tracks. In 1861 the settlement was first accessed by a road.The first hotel was built in Geiranger in 1885.

Geiranger and the fjord of the same name are among Norway's most beautiful landscapes. The Geirangerfjord and the Nærøfjord have been on the UNESCO World Heritage List since 2005. The decisive factors for inclusion in the world heritage were nature conservation criteria and the overwhelming fjord landscape. 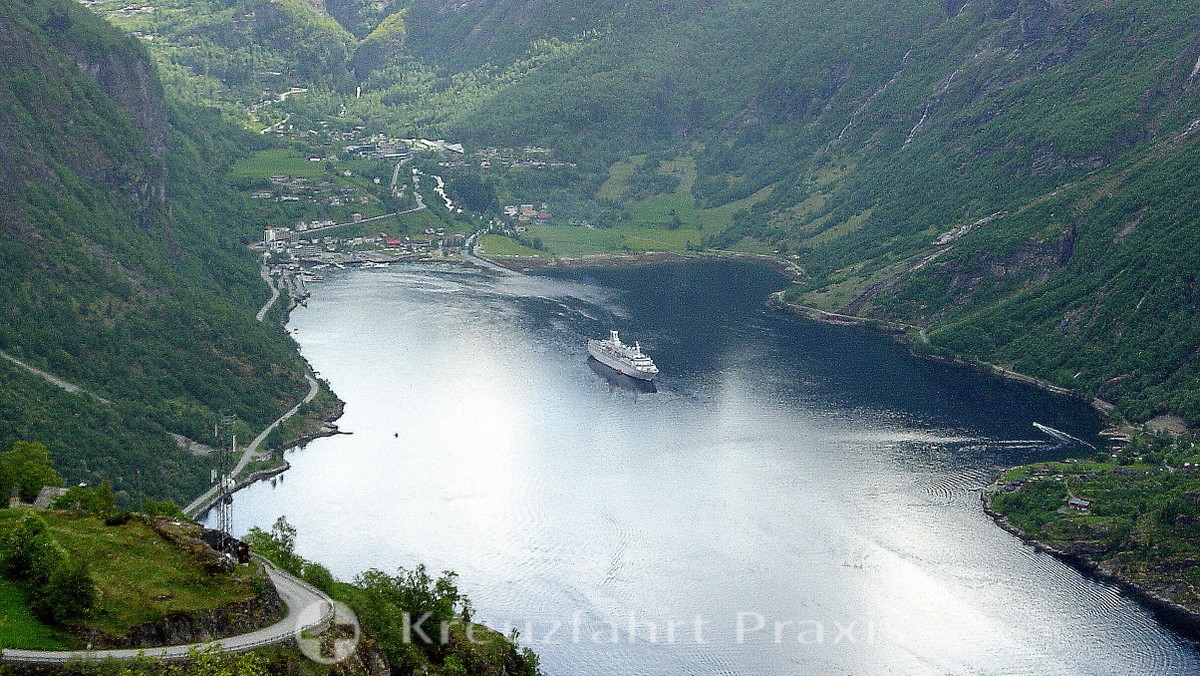 Geiranger can be reached by land and sea. The overland route leads over spectacular mountain passes. When arriving on the water, the ships glide slowly past high rock walls and gigantic waterfalls through the 15 kilometer long fjord. 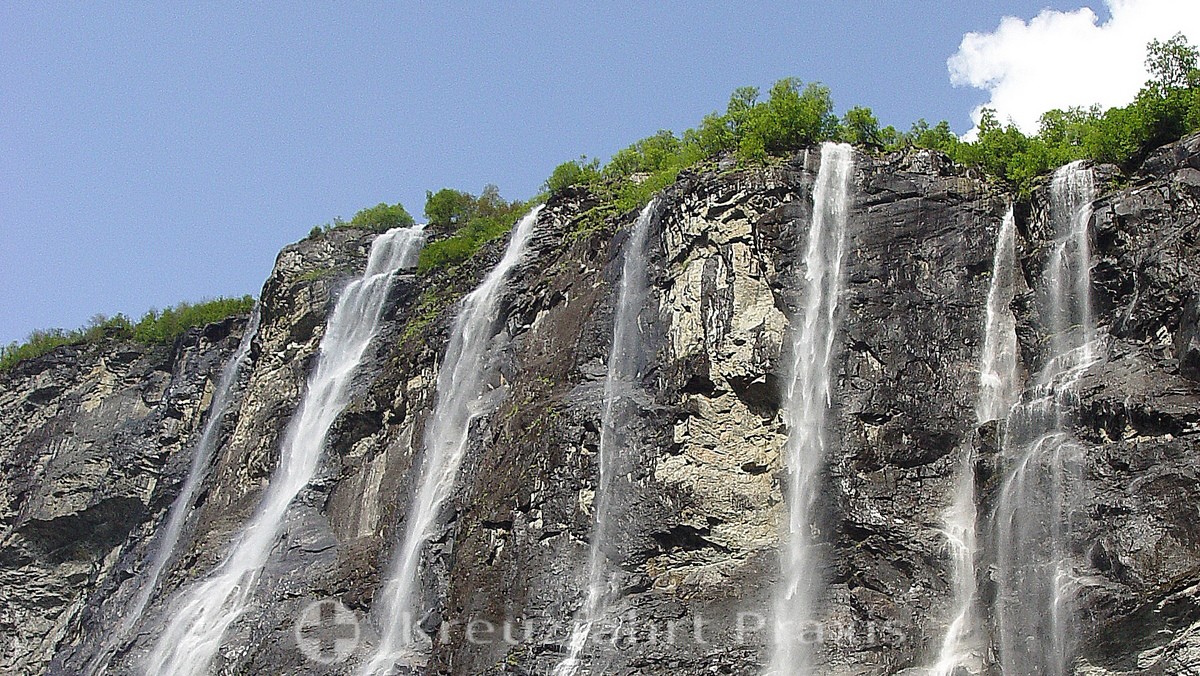 Geirangerfjord - Waterfall of the Seven Sisters 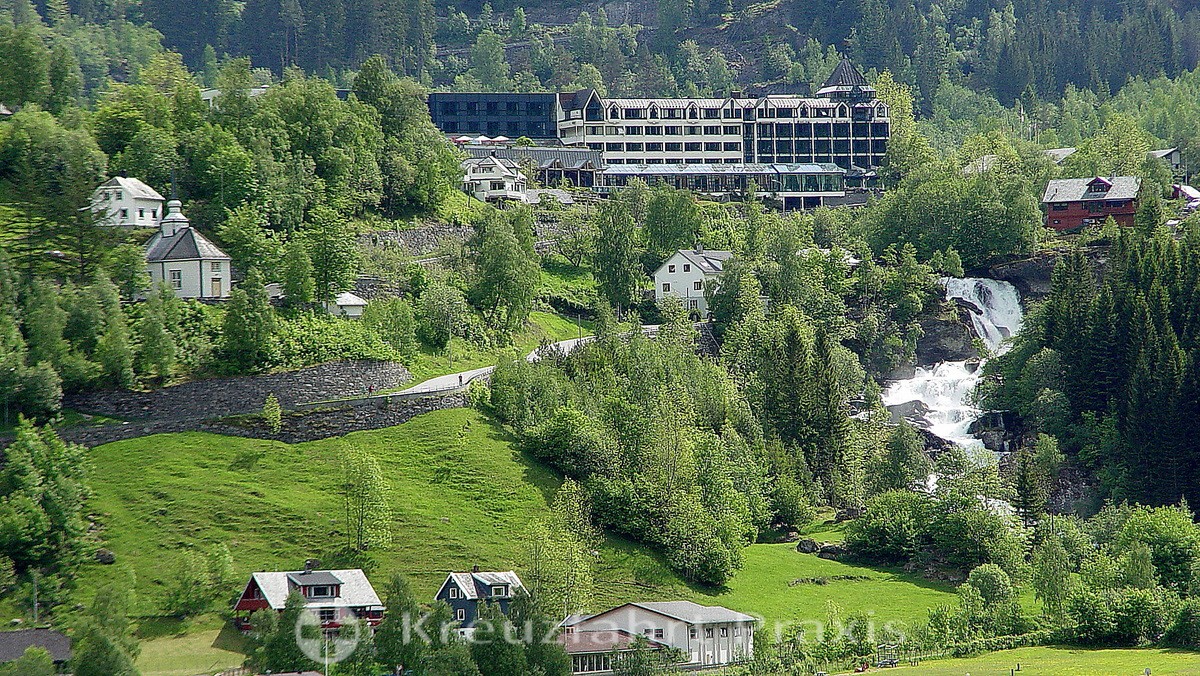 Geiranger - Hotel Union, in front of the waterfall

The Fjord Passage is followed by Geiranger, a tranquil place with an alpine backdrop. Geiranger lives from tourism. Out of season, no more than 250 to 300 people live in the community. During the tourist season the population multiplies to 2.000. The hotel capacity is estimated at around 3.000 beds.

Much has happened in town over the past ten years. Geiranger is the starting point for mountain hikes and mountain bike tours. Other activities include bus tours to Geiranger's viewpoints, kayak tours, fjord safaris, trips with RIB inflatable boats and much more. Geiranger also has a provider of electrically powered rental cars. The cute vehicles offer a special treat.

When it comes to cruises, Geiranger ranks second in the ranking of the busiest cruise destinations in Norway after the city of Bergen. In the period from May 3 to September 29, 2017, there were 183 calls by cruise ships in Geiranger, and almost 350.000 cruise passengers were counted. On individual days, up to four cruise ships with around 9.000 passengers were in front of Geiranger. The pollution caused by ships reminds us of peak days in Alaska's top destinations.

In the absence of large quays, the cruise ships anchor off Geiranger. The passengers are brought ashore in tender boats. Only one ship can dock at the Seawalk, a pontoon bridge established in 2013. The guests leave their ship directly via this pier and get ashore quickly. 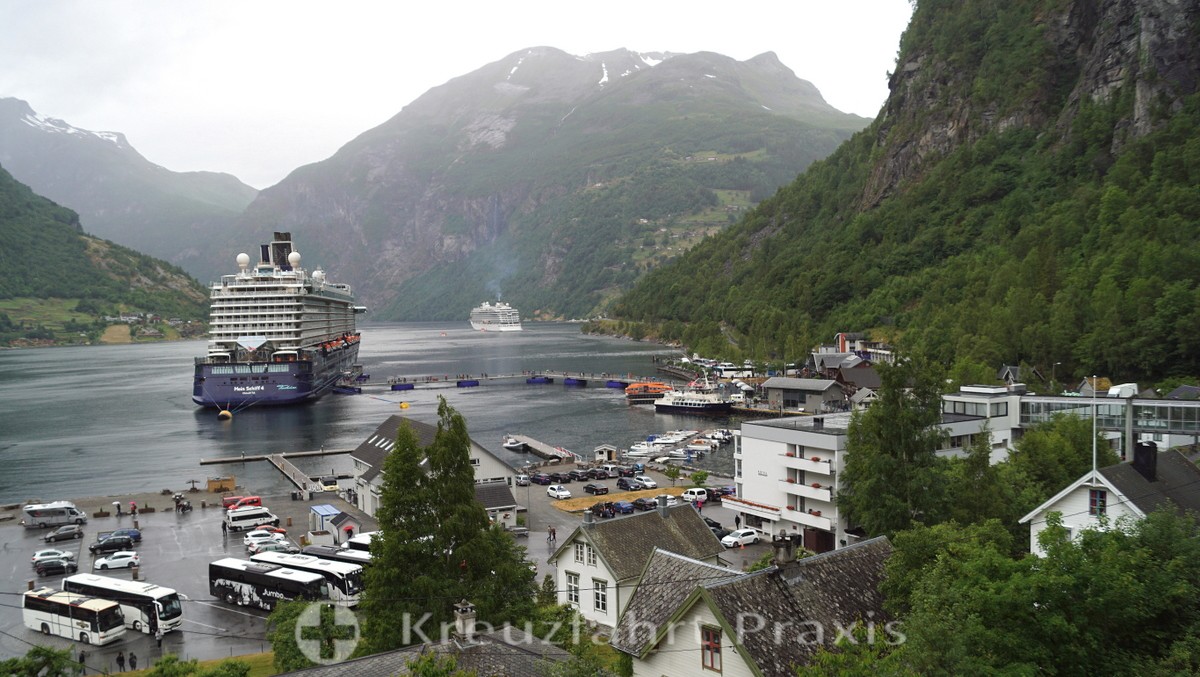 Mein Schiff 4 on the Geiranger Seawalk

The well-organized tourist information office next to the pier for ferries and tender boats is useful. Using digital displays, visitors can quickly find out about the range of shore excursions. 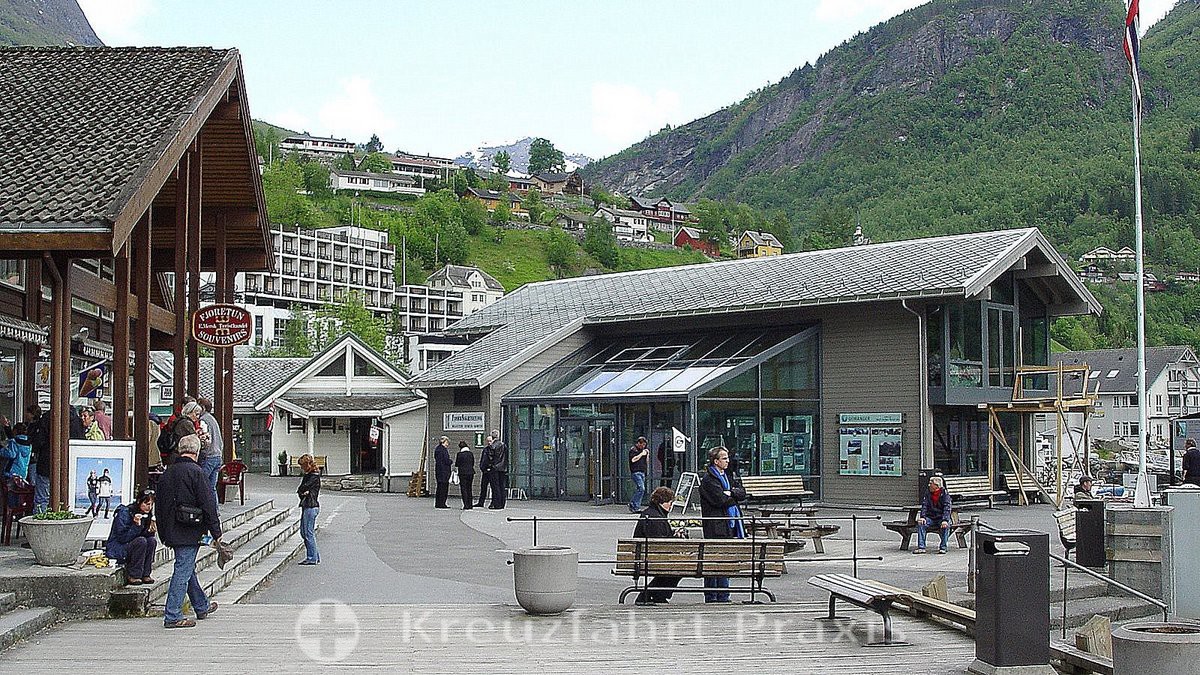 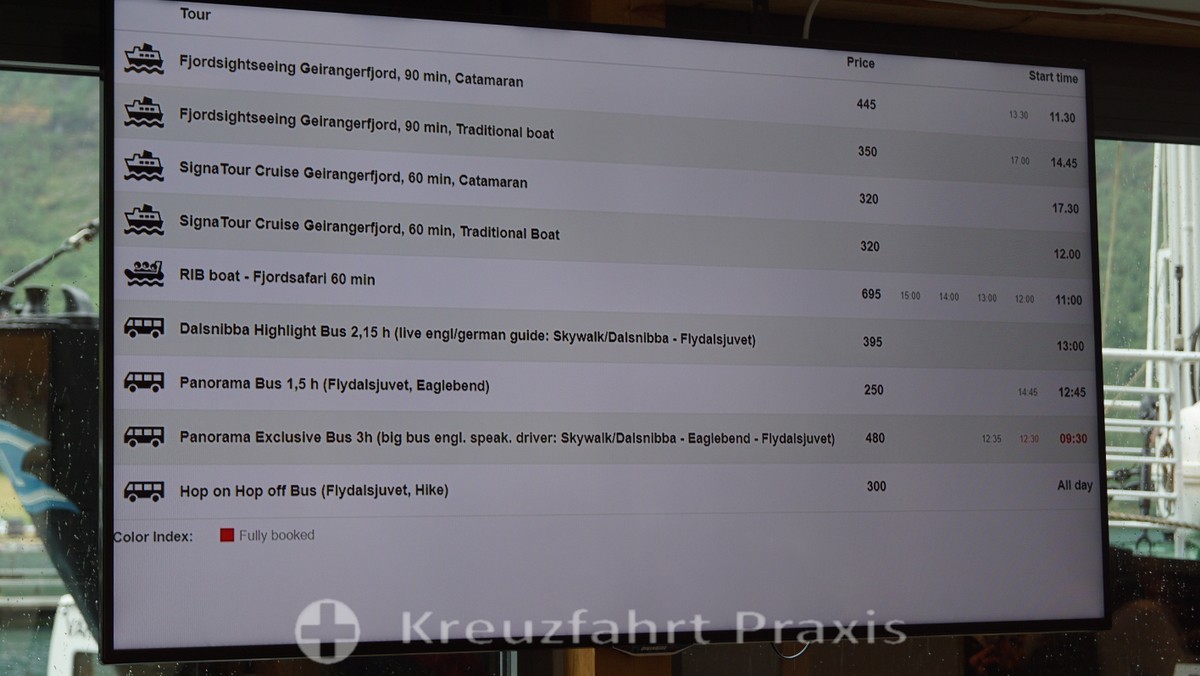 Geiranger is getting cleaner

The environment is suffering from the onslaught of cruise ships. In 2018 the Norwegian Parliament passed air pollution control requirements. From 2026 at the latest, only emission-free ships will be allowed to call at the Geiranger and the similarly polluted Nærofjord. In addition, the cruise lines are obliged to adapt the pollutant emissions of the ships in both fjords to current environmental developments with immediate effect. Some ferry lines are already doing without marine diesel; instead, they are experimenting with forms of electric propulsion.

Under Geiranger sightseeing we report what day guests can do in the tranquil Geiranger.