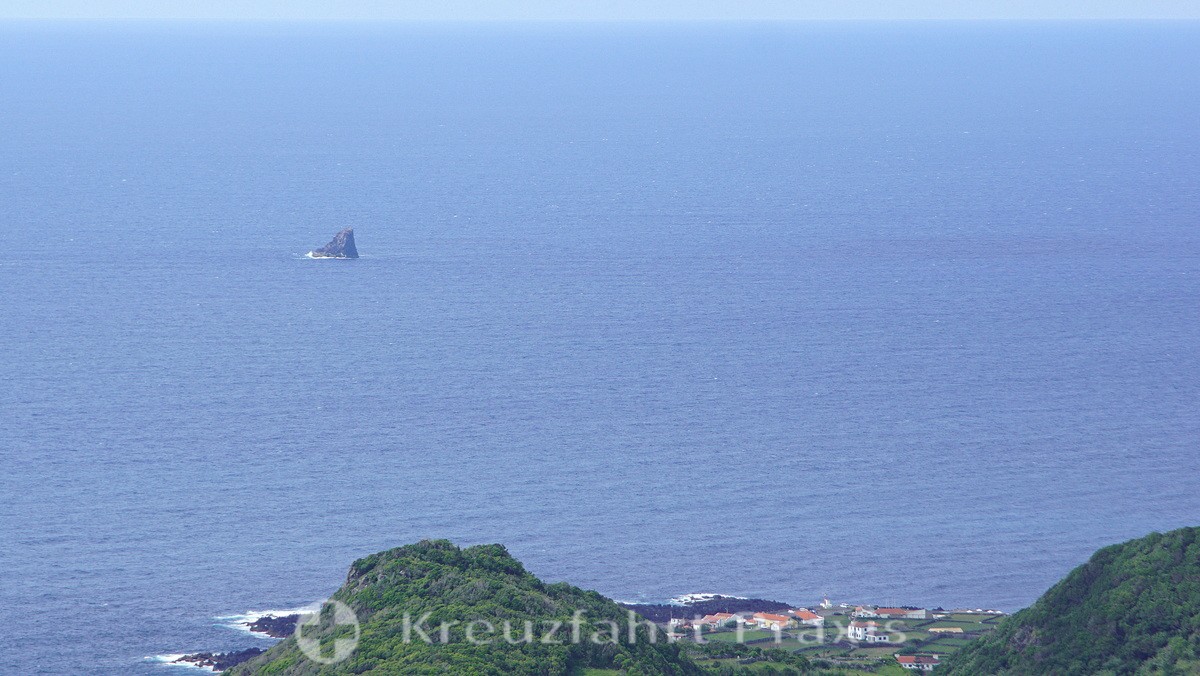 Flores is the westernmost island in the Azores. A small volcanic rock in front of the village of Fajã Grande, the Ilhéu do Monchique, marks the end of Europe. 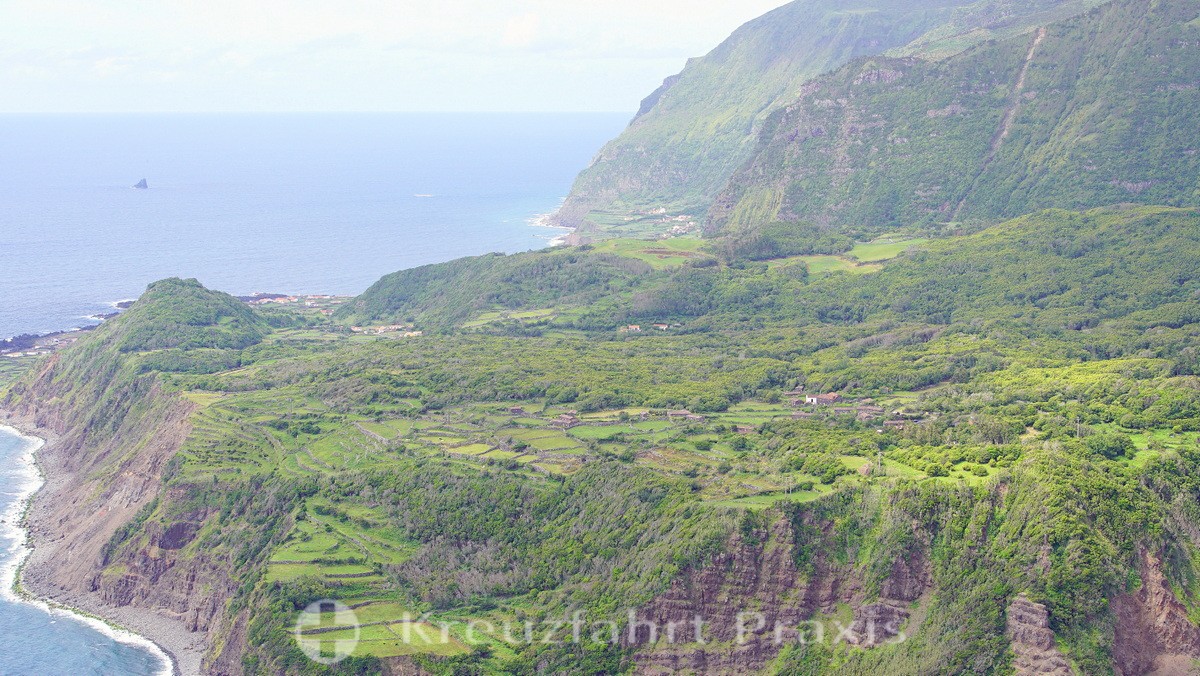 Together with the neighboring island of Corvo, Flores is already on the North American plate. The distance to mainland Portugal and Canada is almost the same. It is 1900 kilometers from Fajã Grande to Lisbon and 1940 kilometers to St. John's on Newfoundland.

With an area of ​​143 square kilometers, Flores is the fourth smallest island in the Azores. It owes its name to the unique display of flowers: hydrangeas, irises, canna and daisies are just a few examples. Flores is one of the rainiest islands in the archipelago, so the bright colors of the flowers are accompanied by bright green tones.

The highest mountain is the extinct volcano Morro Alto at 914 meters. The villages are near the coast, in the interior Flores is not populated. 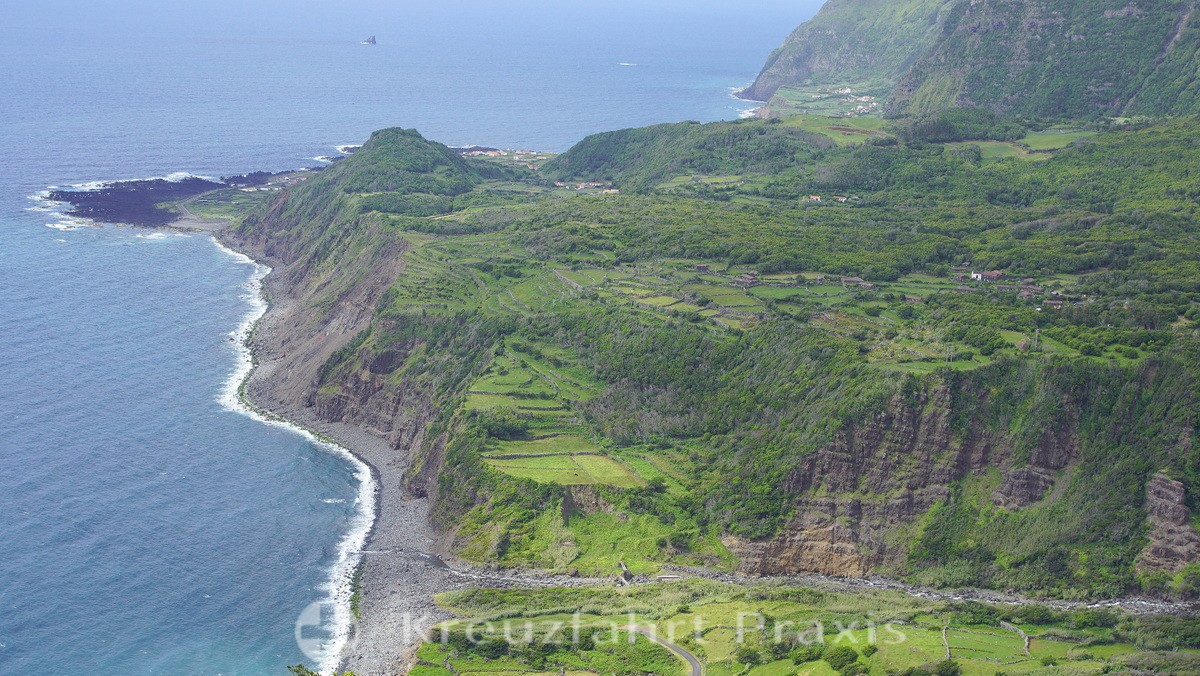 In 2020 around 3600 people lived on Flores. The population is gradually decreasing. There is a lack of attractive jobs and the associated prospects for young people.

Like every Azores island, Flores has an airport. From Santa Cruz das Flores there are direct SATA Air Açores connections to São Miguel, Terceira, Faial and Corvo.

There is only a ferry connection to the neighboring island of Corvo.

In October 2019, Hurricane Lorenzo grazed the island. The Lajes das Flores pier, which was completed after a number of years of construction and which made supplying the island much easier, was largely destroyed. Currently only ships up to a length of 60 meters can moor. Airplanes are once again the most important means of transport. 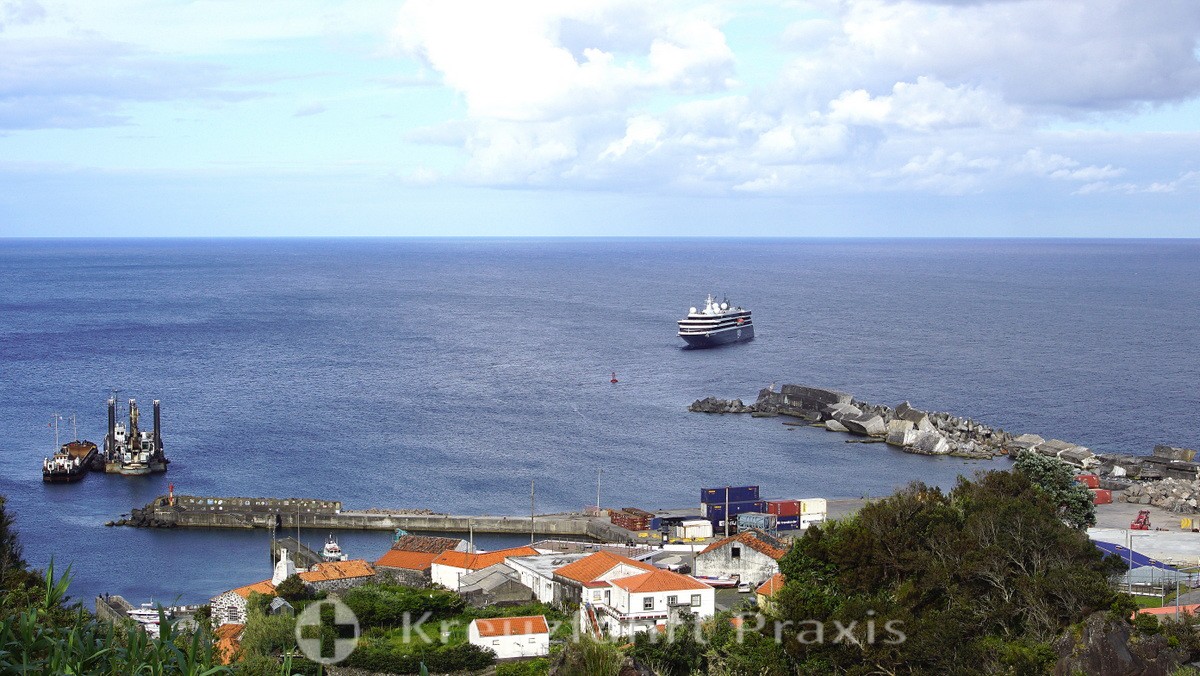 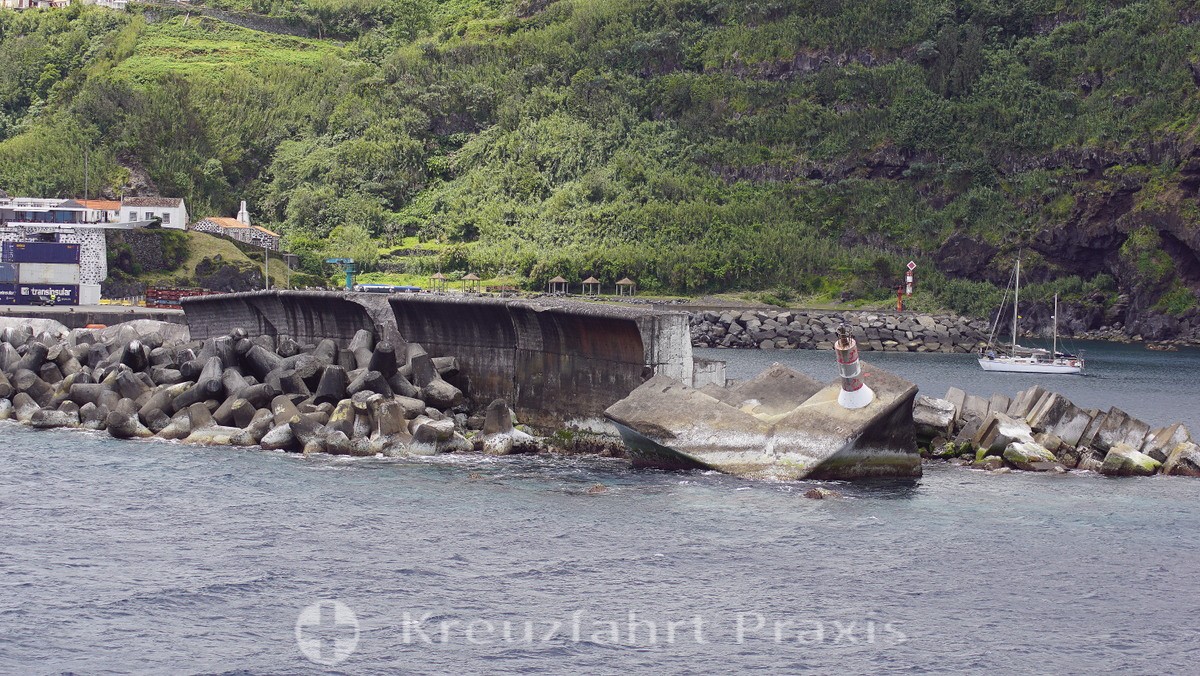 The people of Flores live from agriculture and livestock. The fishing is for personal use. Slowly but surely, tourism is developing as a further economic mainstay.

The sights on Flores

Flores has been a UNESCO Biosphere Reserve since 2009. The spectacular nature is the pound with which Flores proliferates. Flores is an island for hikers. 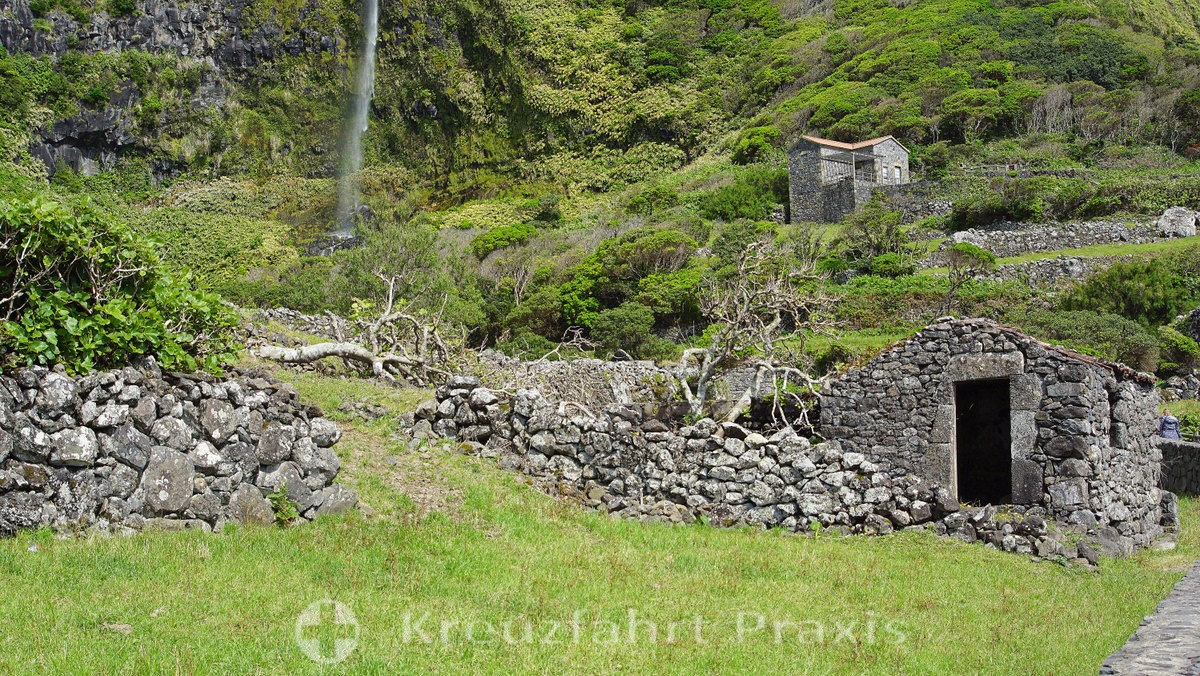 Flores - Fajã Grande - Path to the Cascata do Poço do Bacalhau

The main town of Santa Cruz has a small fishing port, which is also used by boats to and from Corvo. There is a beautiful natural swimming pool and a decorative lighthouse. The Folklore Museum Museu das Flores is located in the former Franciscan monastery of São Boaventura, next to it the small Baroque church of Boaventura. The church of Nossa Senhora da Conceição with its two domed towers is also worth seeing.

There are a total of seven craters, six of them with lakes, on Flores: Caldeira and Lagoa Funda, Rasa, Negra, Comprida, Branca, Lomba and Caldeira Seca.

They are not far from each other on the plateau, four in the nature reserve of the Morro Alto. The craters are different, flat or steeply sloping. At 113 meters, the Caldeira Negra has the deepest crater lake in the Azores. Various miradouros offer views of the overwhelming crater landscapes.

Fajã Grande is the westernmost town in Europe: an idyllic village with a few holiday homes, cafes, a natural swimming pool and steep cliffs with waterfalls as a backdrop. Many of the old stone houses have been and are being renovated for renting out to tourists. The absolute highlight in Fajã Grande is the Poço do Bacalhau pond, into which a 90 meter high waterfall pours. A path delimited by lava stones leads past active water wheels to Poço do Bacalhau. 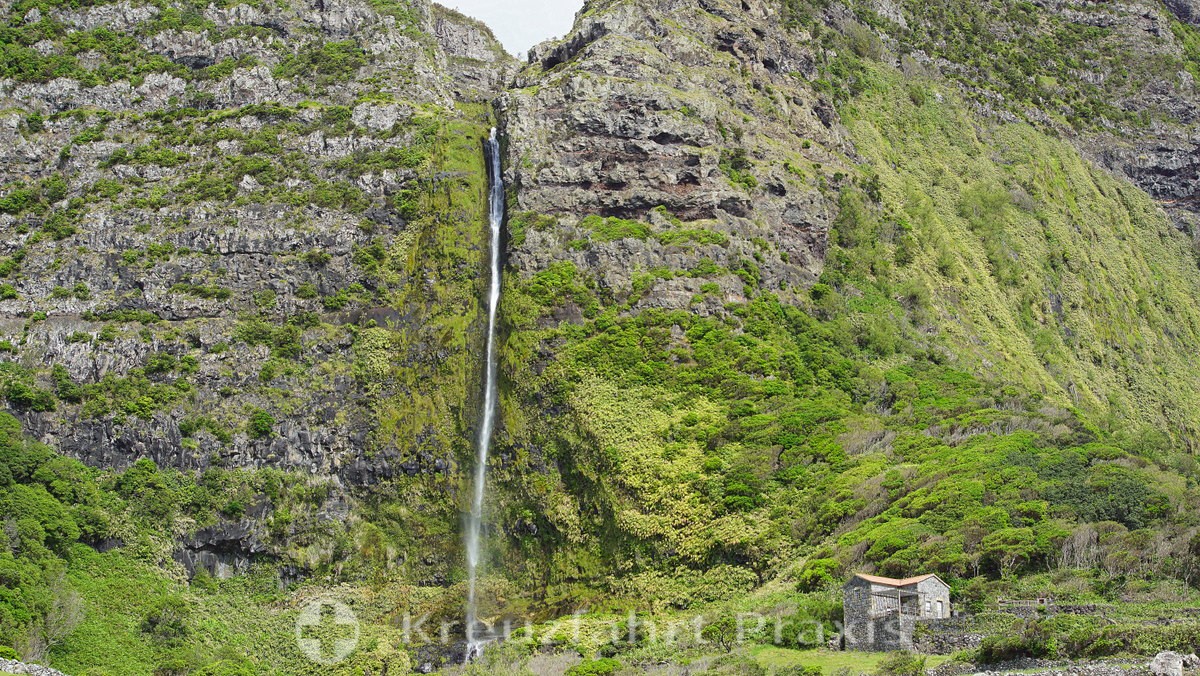 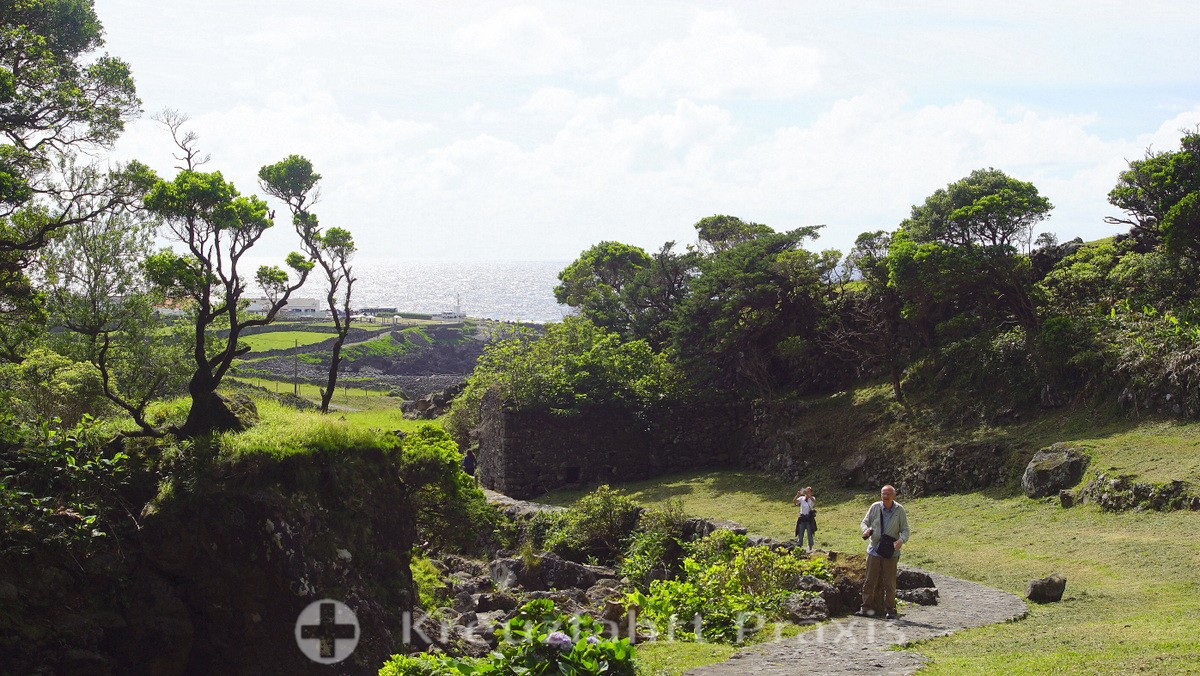 Fajã Grande - path to the Cascata do Poço do Bacalhau

From the Miradouro Ponto de Vista and from the Miradouro Craveiro Lopez you can see this little village and the entire west coast, including the Ilhéu do Monchique rock needle. The waterfalls that end in the pond Poço da Ribeira do Ferreiro, also called Alagoinha, are spectacular. 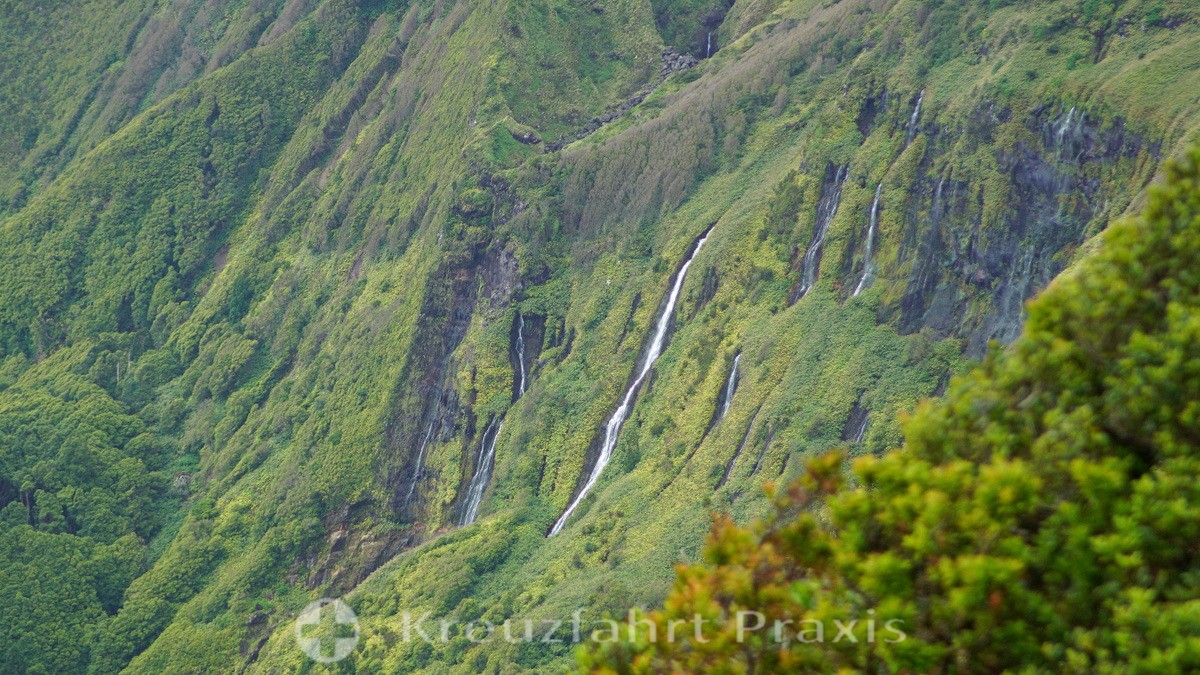 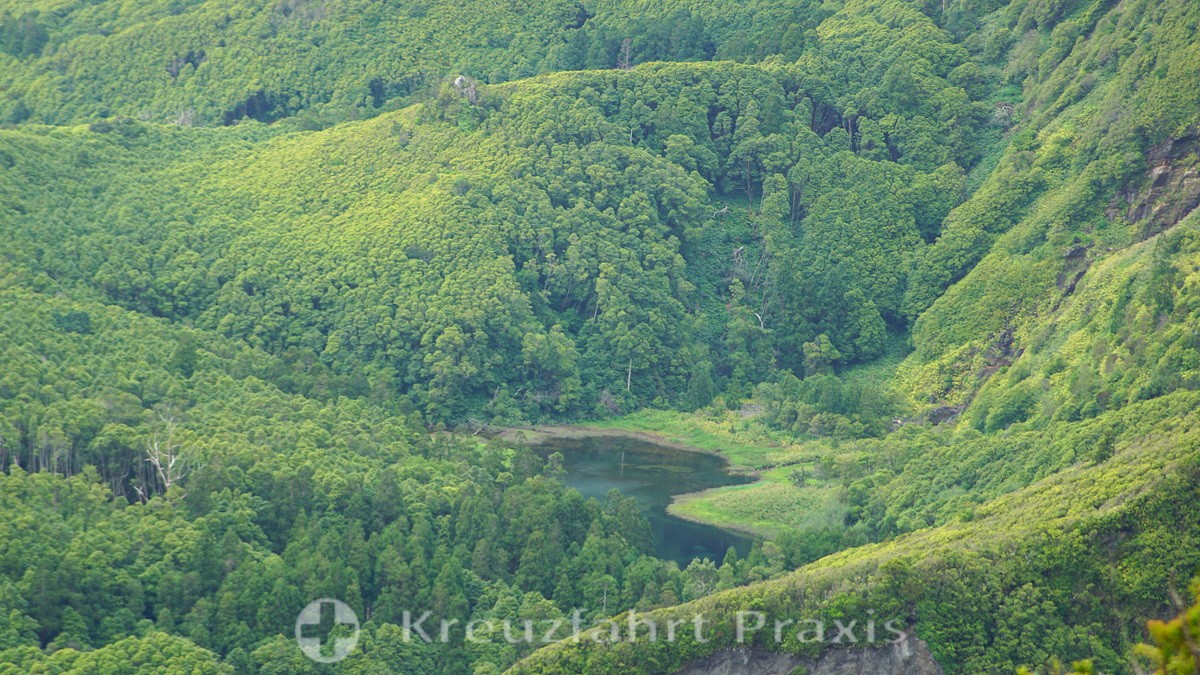 Not far away, the Ribeira Grande river rushes down the rocks and then flows through the plain to the sea.

South of Fajãzinha is this impressive basalt formation that resembles organ pipes. More than 200 pinnacles with a height of 20 to 30 meters form the Rochas dos Bordões. 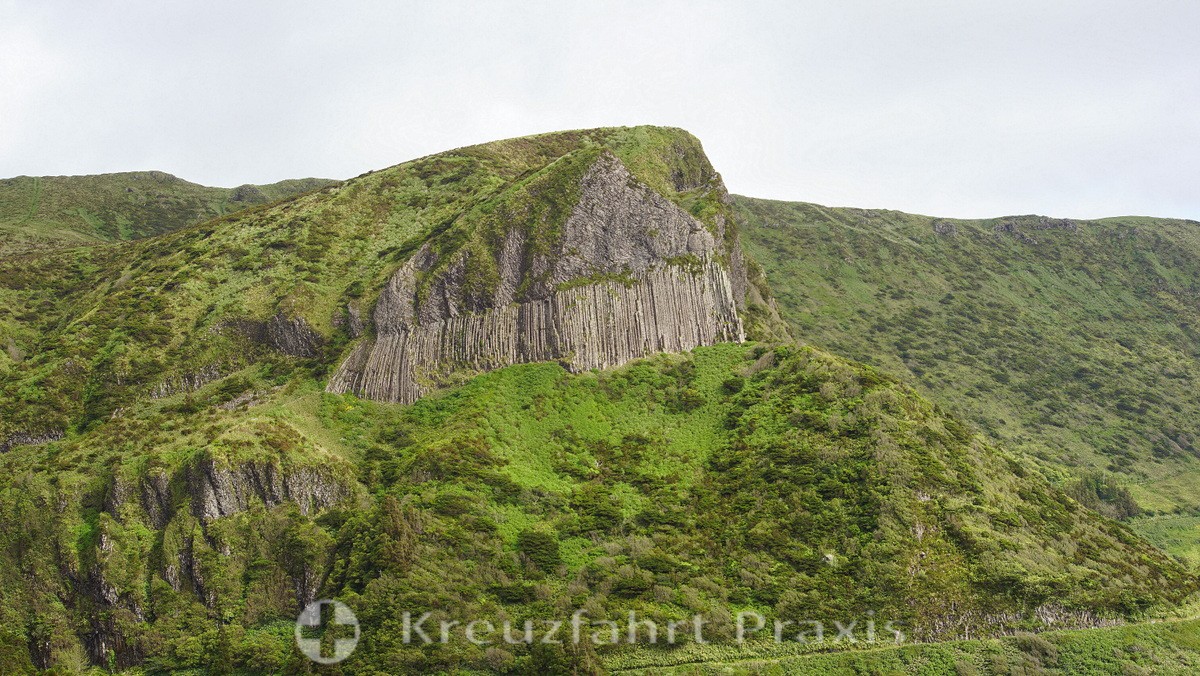 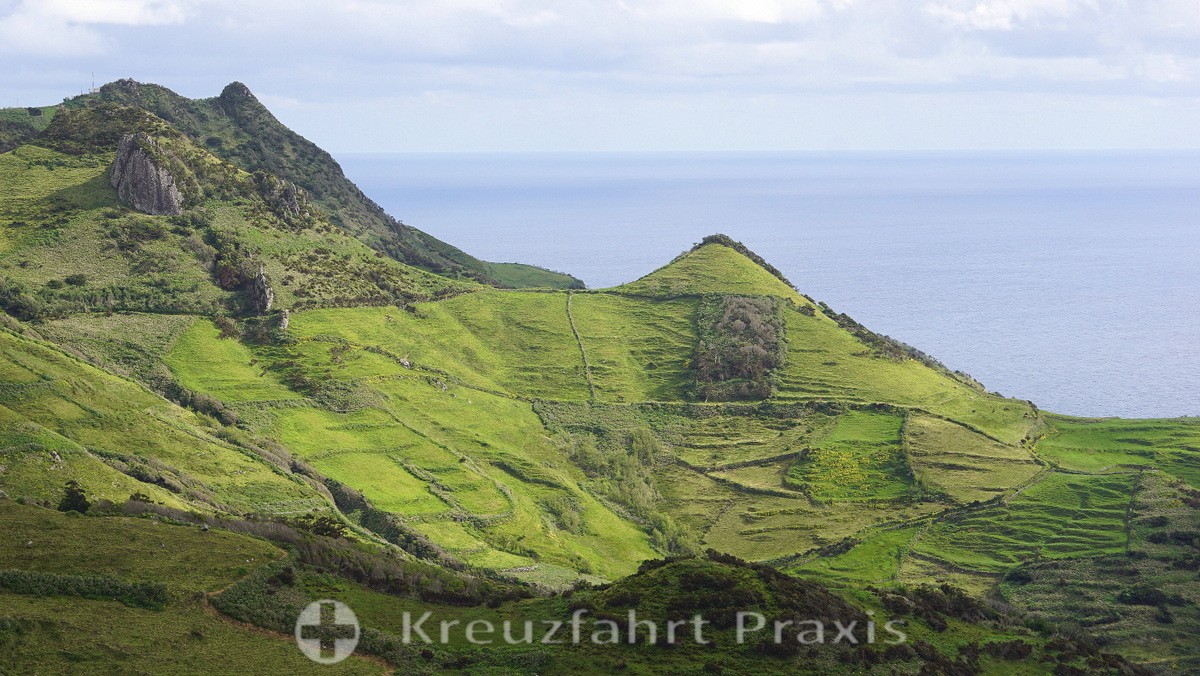 In June 2021 we are in the roadstead with the WORLD VOYAGER in front of Lajes das Flores. Because of the Covid 19 pandemic, we are only allowed to leave the ship in organized groups. We opt for a half-day tour on the bus. Many of the sights of Flores are on the program. 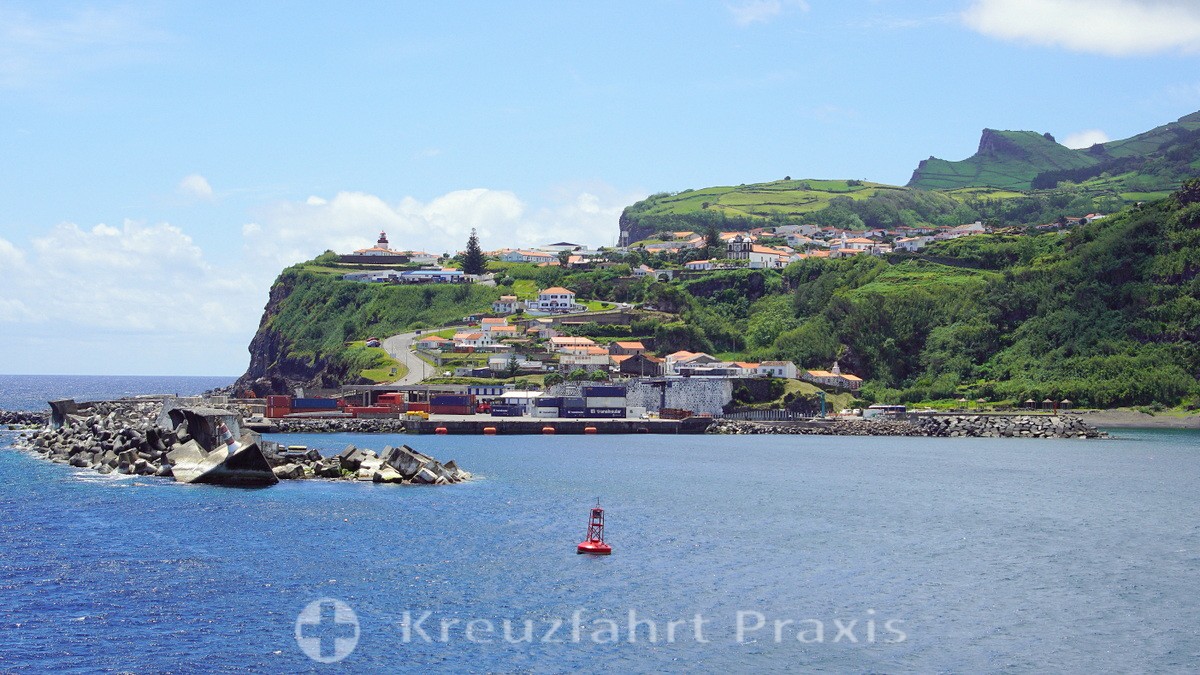 Flores - the port basin of Lajes

With the on-board Zodiacs we drive to the small port of Lajes das Flores. The jetty was destroyed by a hurricane in October 2019. Larger ships like the WORLD VOYAGER can no longer dock.

We drive to the plateau and have our first stop at the craters and crater lakes Funda and Rasa. A little later we stop in the nature reserve at the Caldeiras Negra and Comprida. Everything around us is green, mixed with the multicolored spots of the flowers. Flores is actually a natural paradise. 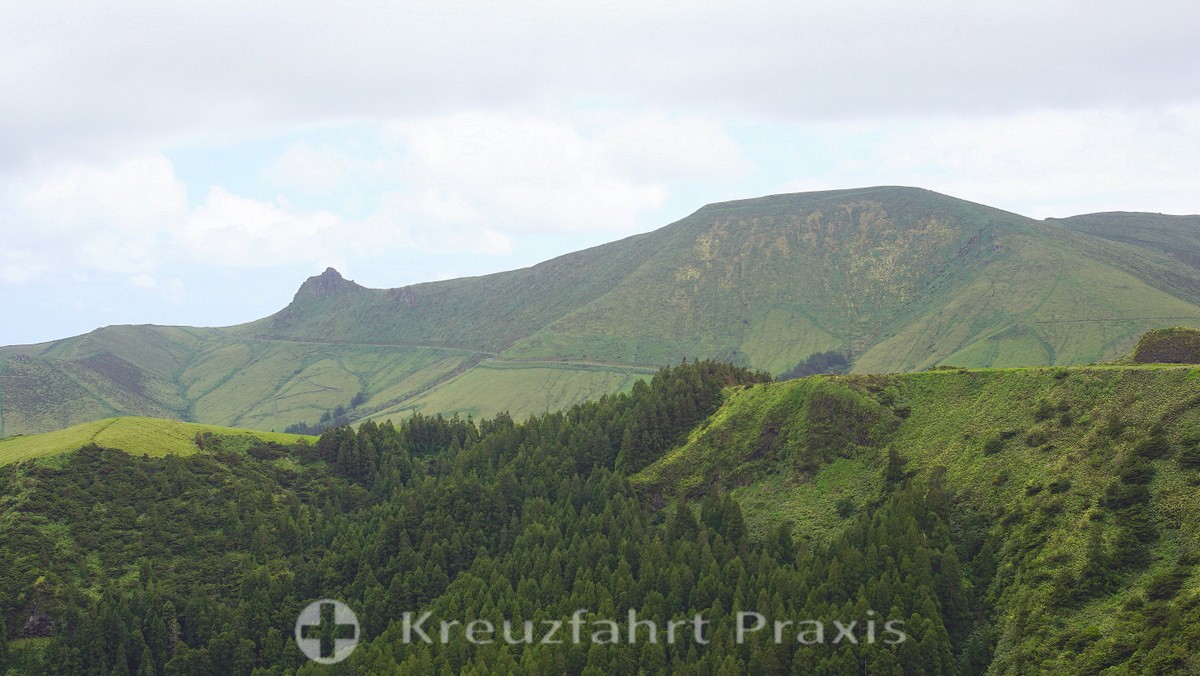 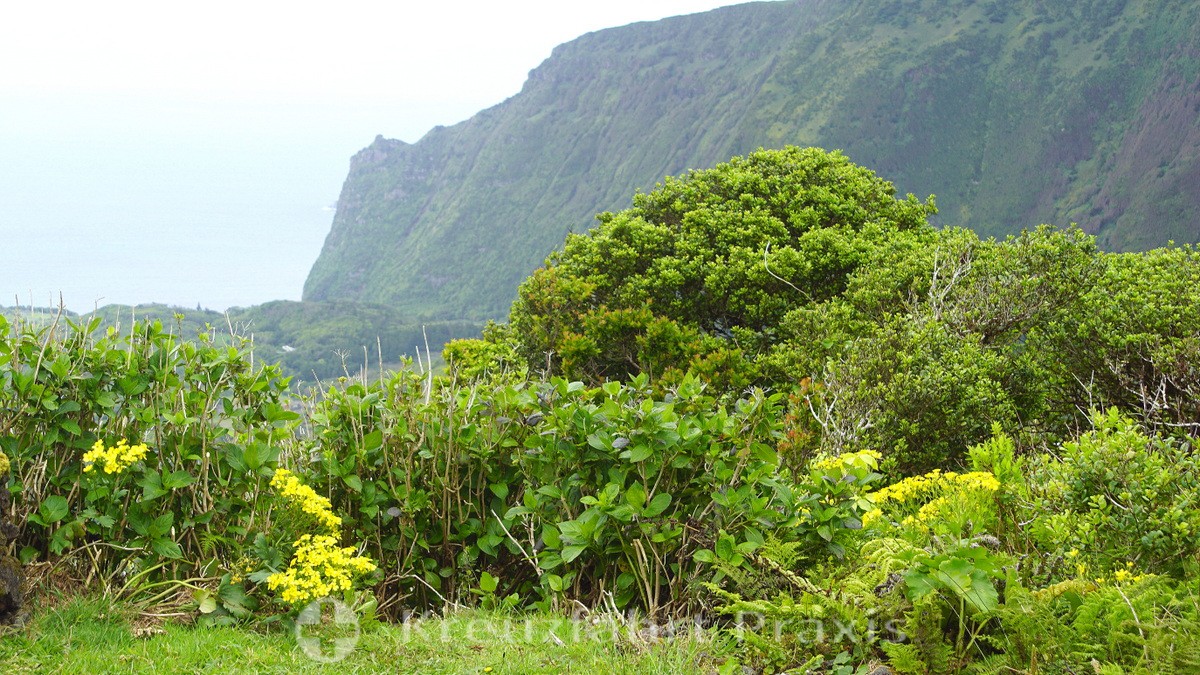 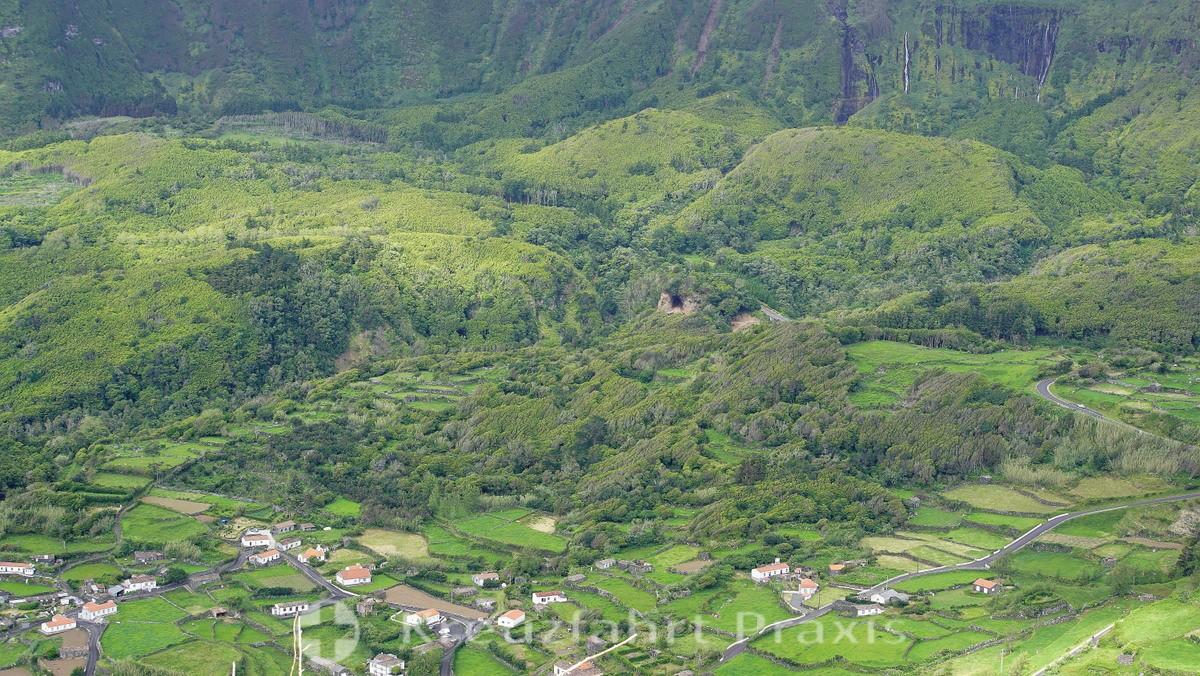 In Fajã Grande we go to the Poço do Bacalhau. Between walls made of lava stones and along a stream with water wheels, a footpath leads to this natural spectacle. A 90 meter high water cascade ends in a small lake. A really idyllic place.

On the way back we stop again at various viewpoints. We admire the basalt formation Rocha dos Bordões and the Baia do Mosteiro.

Finally we stop in Lajes das Flores. From the forecourt of the Nossa Senhora do Rosário church, we enjoy the panoramic view over the bay. 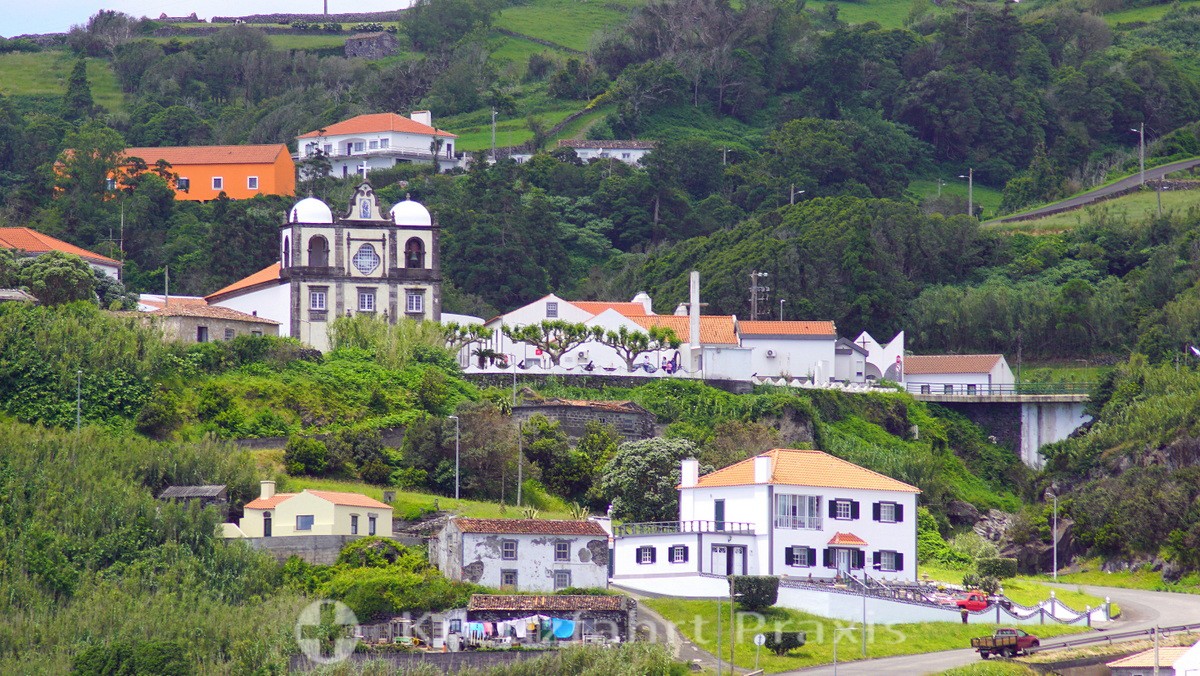 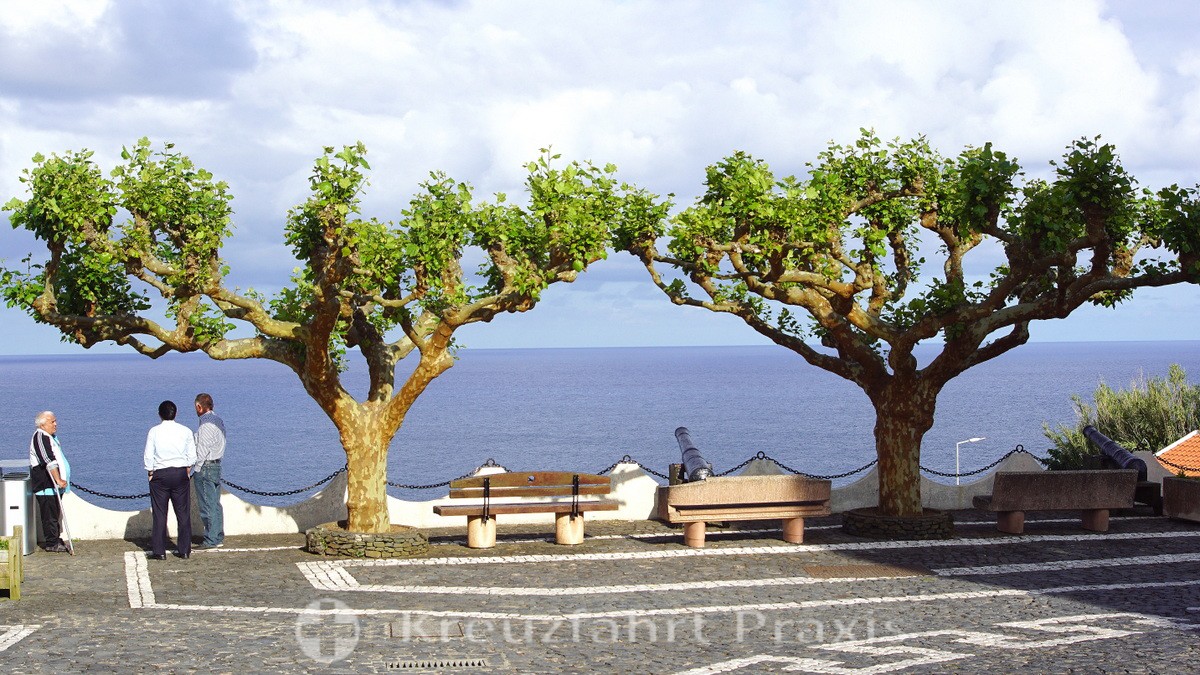 The Zodiacs are already waiting at the harbor to bring us back to the WORLD VOYAGER. Our boat guide Marc makes a detour to a small cave and a waterfall. We saw a lot on Flores.