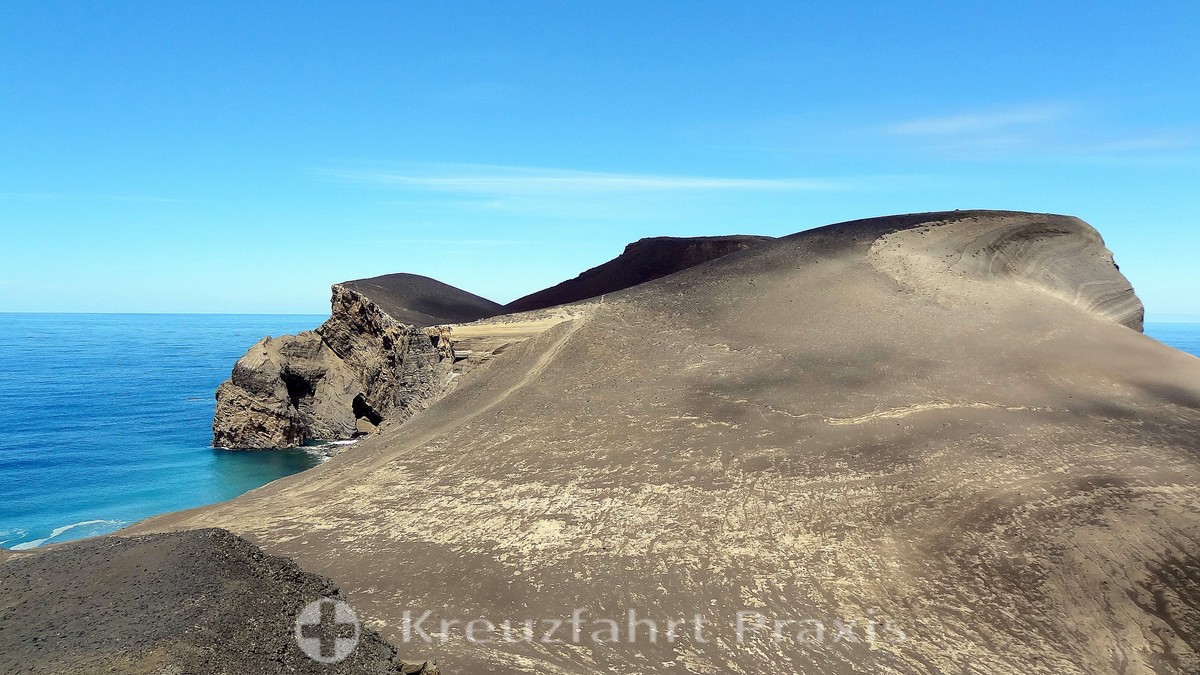 Faial is one of the five central islands of the Azores archipelago. Within this group, it occupies the furthest western position. The Canal do Faial estuary runs between the eastern neighboring islands of Pico and São Jorge. The three very different islands form a triangle within the group of five. 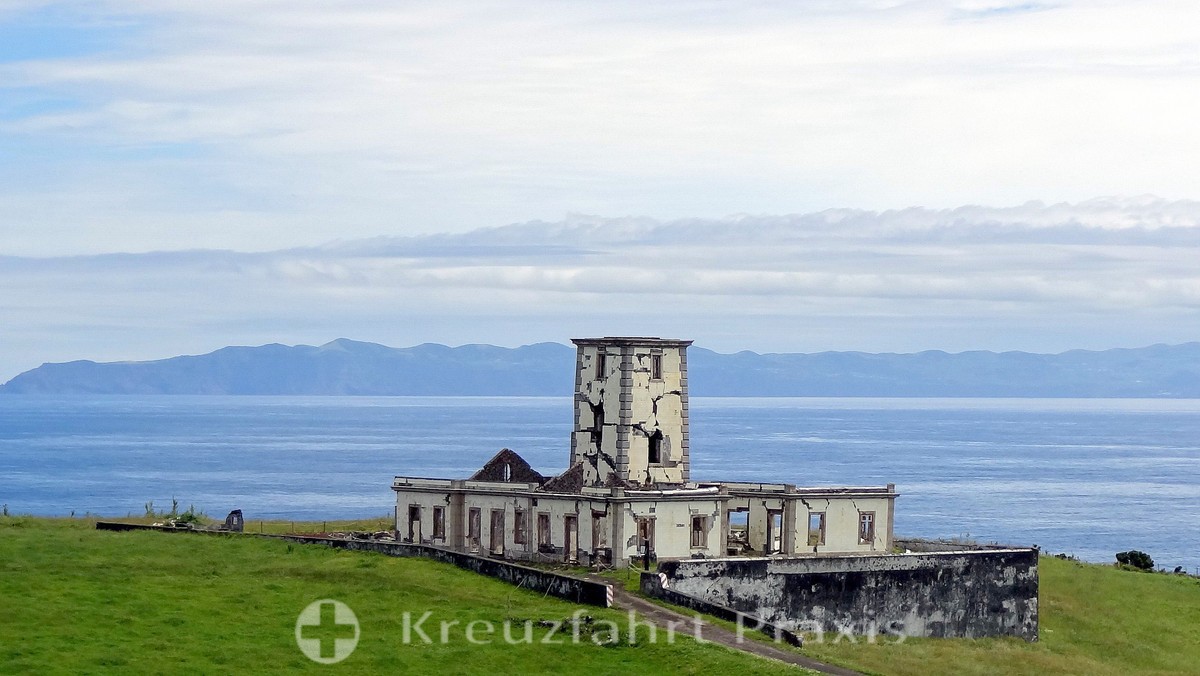 Faial's capital, Horta, is famous for being “cosmopolitan”. The explanation for this: Due to its location, Horta developed into a tried and tested port on the shipping routes between Europe, America and Asia from the 17th century.

Faial admirers call the island "Ilha Azul", which means something like "blue island". It owes its name to the omnipresent, wildly sprawling blue hydrangea hedges. They surround the houses and separate the fields. 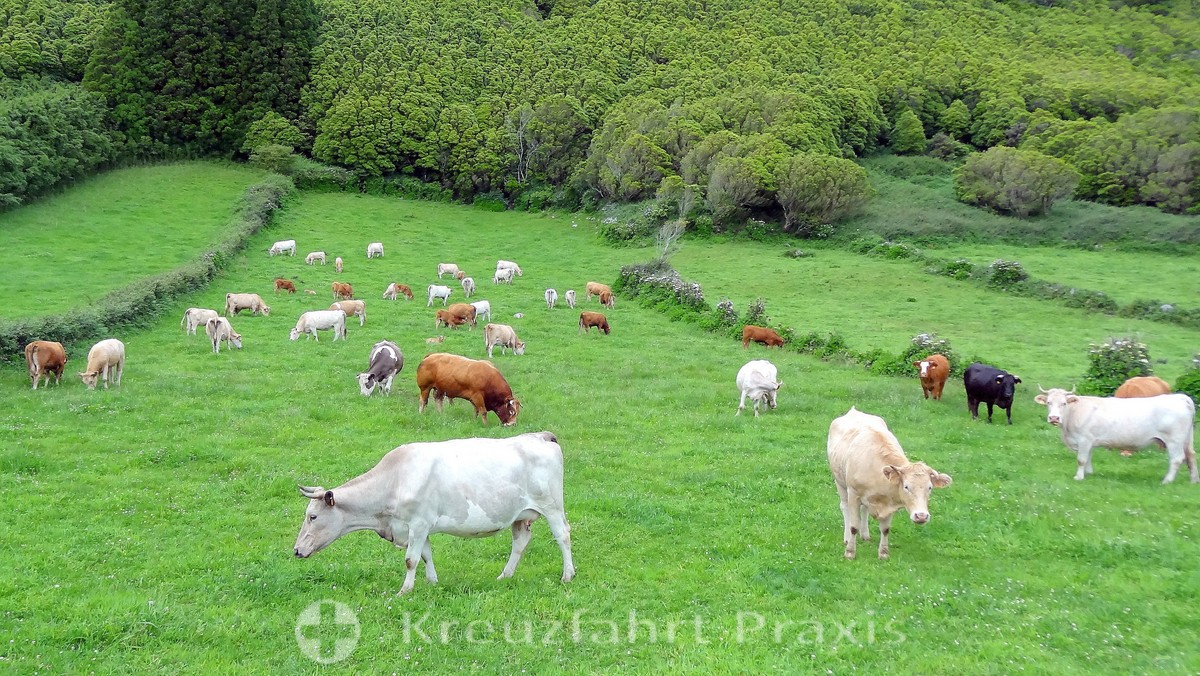 Cattle in front of hydrangea hedges

With an area of ​​173 square kilometers, Faial is the fifth largest of the nine inhabited Azores islands. According to the 2011 Census, more than 15.000 people lived on the island. Horta accounted for about a third of the population.

Faial was discovered in 1427. Three decades later, the Flemish nobleman Joost De Hurtere landed on the island with 15 compatriots. The adventurers looked for silver and tin. Instead of the coveted metals, the expedition found fertile soils. The fertility of the arable land quickly got around in Flanders. In the years that followed, many Flemings sought their fortune on Faial.

It got even better. Because of the increasing overseas trade, Horta's port gained in importance. There sailing ships took food and water. Citrus fruits and wine from the neighboring island of Pico were shipped to Europe via Horta. The advent of commercial whaling and processing of the animals also contributed to the prosperity of the residents. Horta became the center of whaling in the Azores archipelago. It is said that up to 400 fishing boats anchored in the bay in front of Horta in order to go out to hunt sperm whales.

In the late 19th and early 20th centuries, subsea telephone cables were laid between Europe and North America. In this case too, Faial was a suitable stopover because of its location. In 1928 the last cable between Horta and Newfoundland was sunk in the Atlantic. - At the same time, the island served as a stopover for fuel pick-up at the beginning of the transatlantic flights. And nowadays, ocean sailors appreciate Horta as a suitable stopover when crossing the Atlantic. 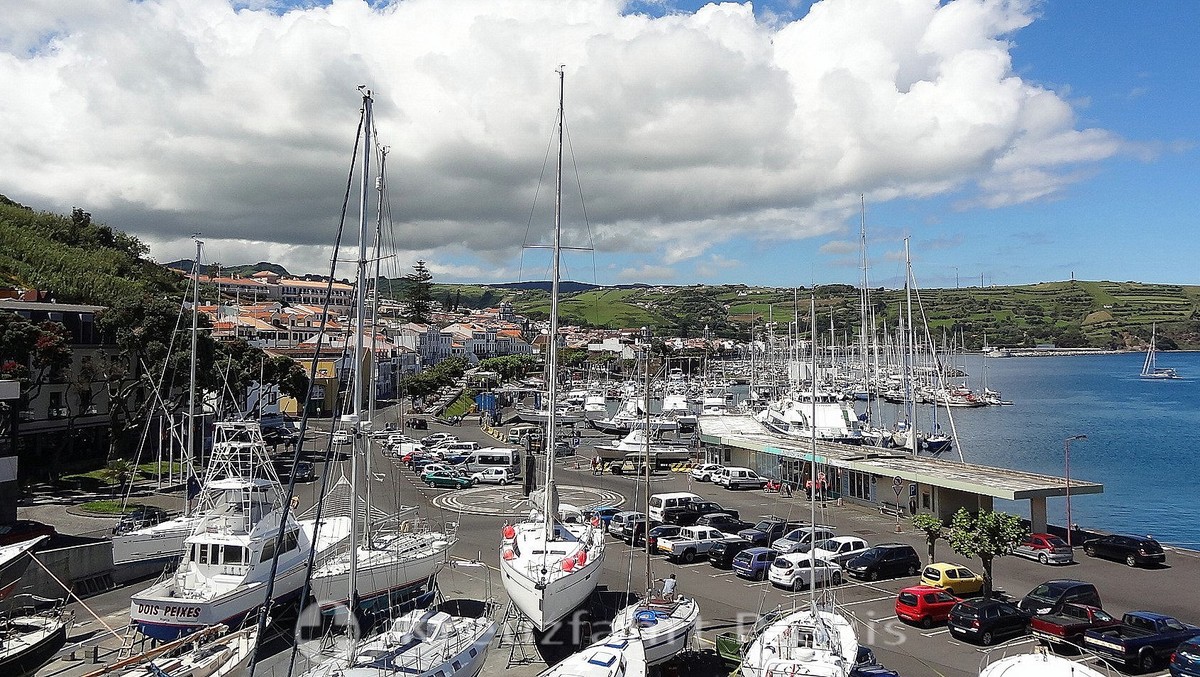 The marina of Horta

Faial was most recently the center of volcanic eruptions and earthquakes. Between 1957 and 1958, the island recorded several volcanic eruptions over the course of 13 months in its north-western region. As a result of the eruptions, the Ponta dos Capelinhos was a two and a half square kilometer peninsula. Forty years later, an earthquake caused great damage in the towns and villages of the island. Eight people died and hundreds of houses collapsed. 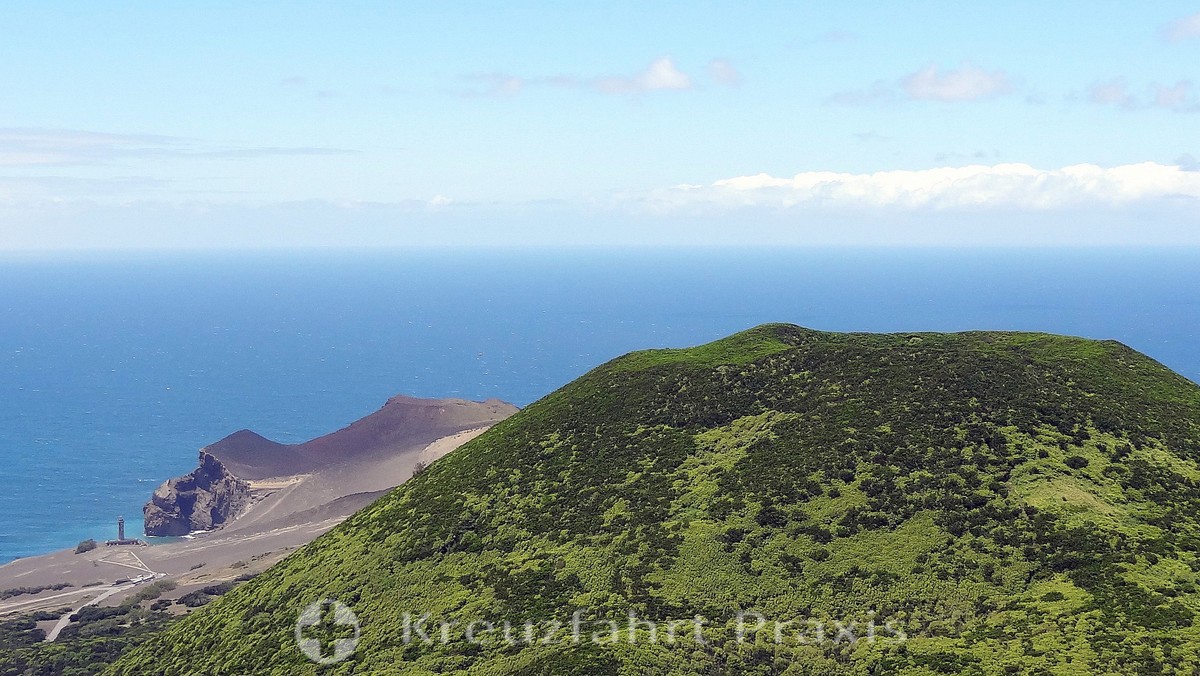 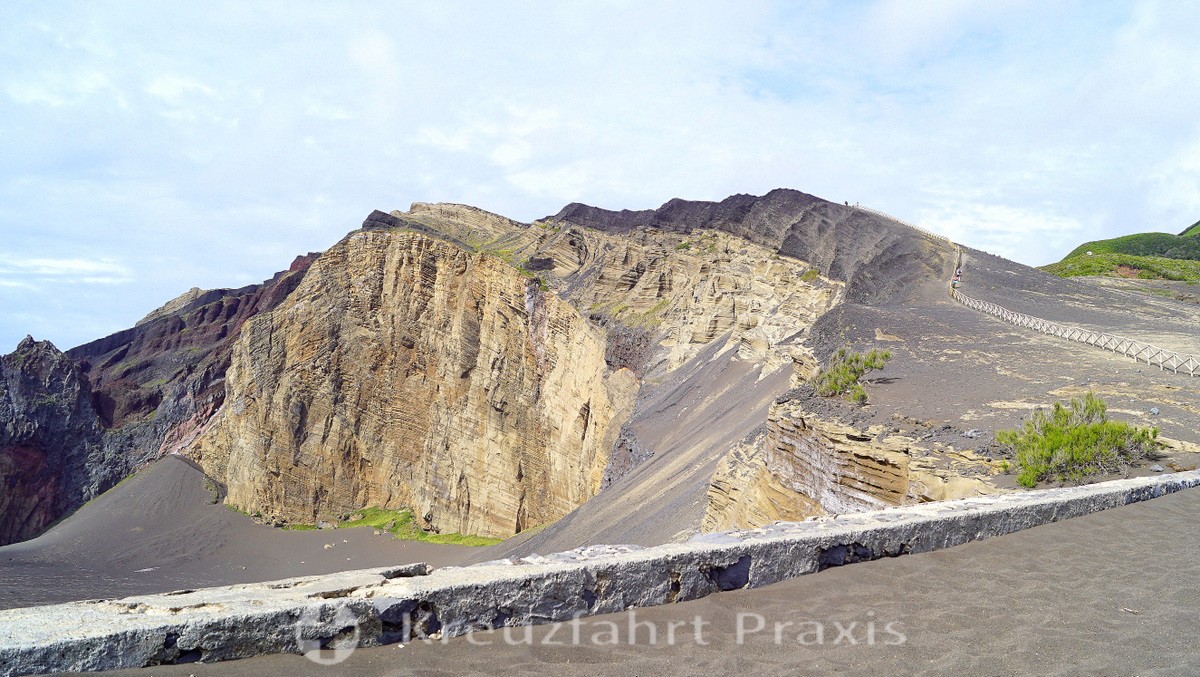 Madeira and the Azores are the only autonomous regions in Portugal. Autonomous regions have their own parliaments, government seats and representative offices of the Portuguese state. The administrative functions are shared by three Azores islands. The Azores Parliament meets in Horta on Faial. In Ponta Delgada the island government sits, and the representative of the central government works in Angra do Heroísmo on Terceira. 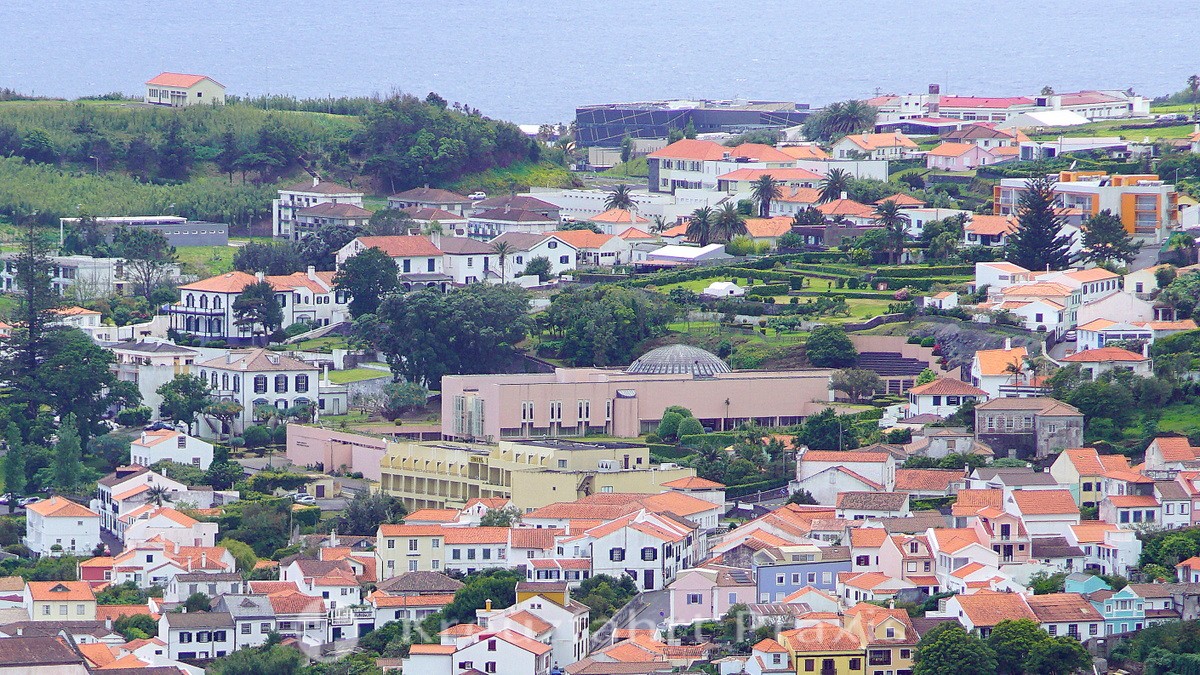 Horta - in the center the Parliament of the Azores

The University of the Azores, based in Ponta Delgada on São Miguel, has an offshoot in Horta. The city is a university location with the faculties of oceanography and ichthyology.

Horta and Portugal's capital Lisbon are around 1.700 kilometers apart as the crow flies. Life in the Atlantic is nowhere near as tranquil as it appears. The economic situation leaves a lot to be desired. The unemployment rate in the Azores is high: the average income of the Azorians is low. Entrepreneurial activity takes place mainly in the sub-areas of agriculture, animal husbandry, fishing and services. Around three quarters of the population work in the public sector and in the service sector. Growing income is generated through tourism. According to official statistics, Faial counted more than 57.000 visitors and 139.000 overnight stays (as of 2018). 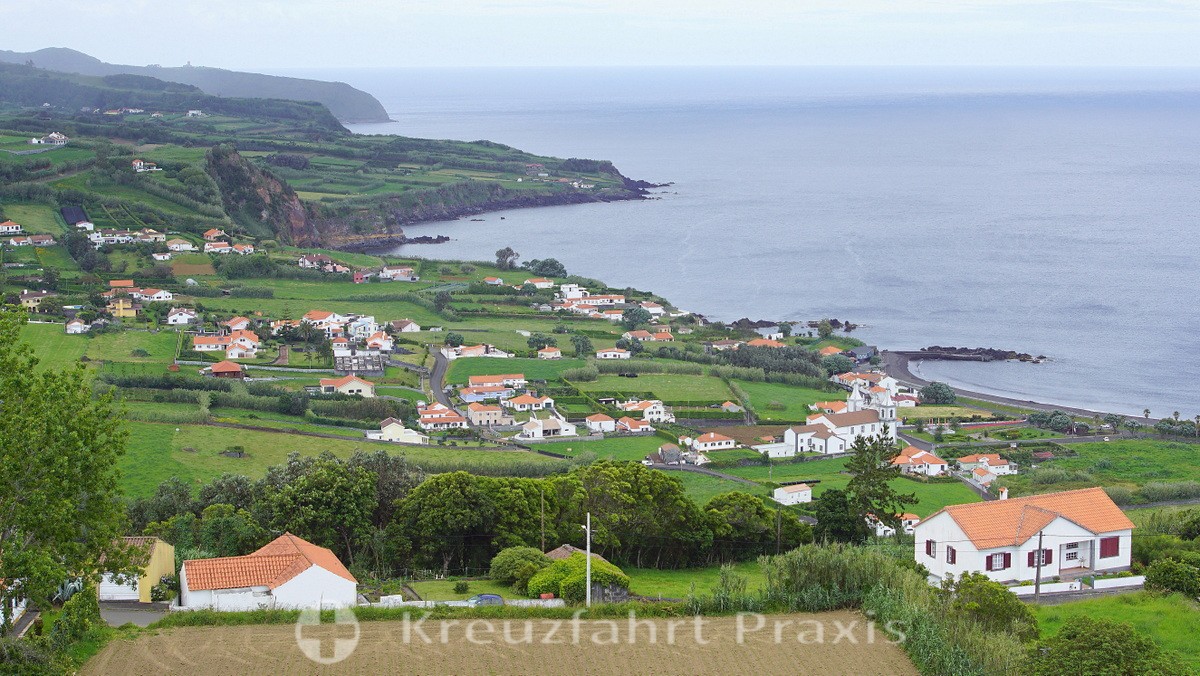 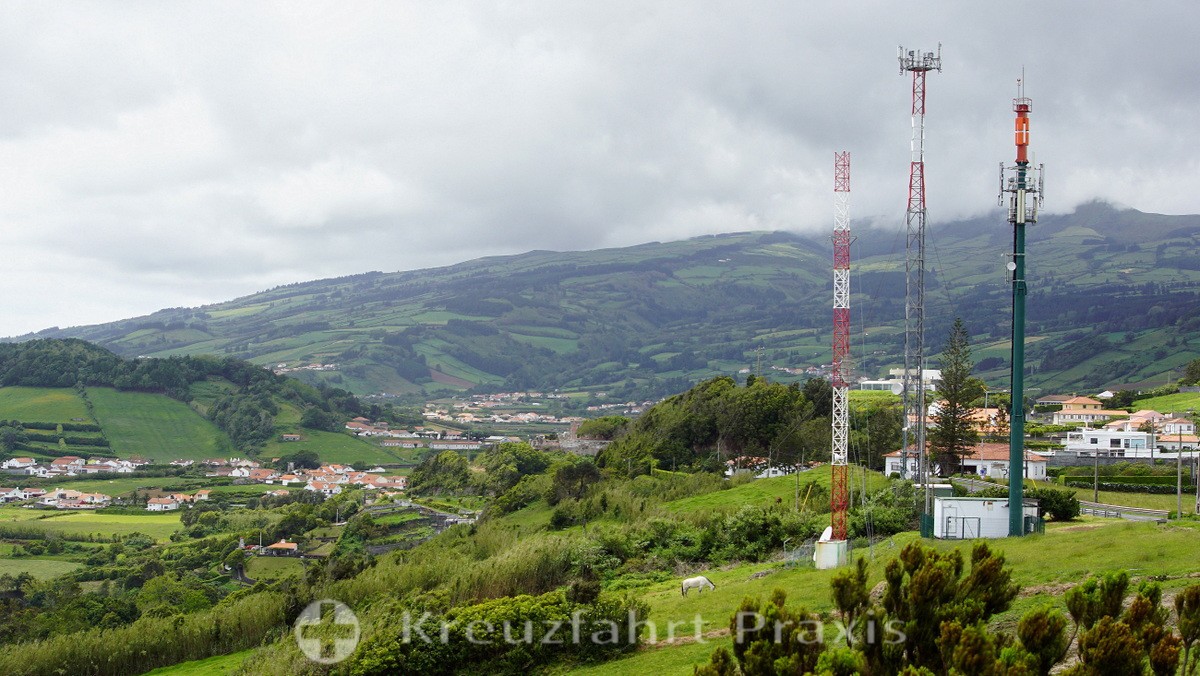 In June 2021 our cruise ship, the WORLD VOYAGER, makes a stop in the port of Horta on an Azores cruise. As a result of the Covid 19 pandemic, we are only allowed to leave the ship in organized groups. In the morning we take the on-board Zodiacs for a one-hour trip around the Monte da Guia peninsula. Then we “discover” Faial on a four-hour panoramic bus ride. Our program includes the top sights and the most beautiful views of the island. The tour ends in Horta.

The WORLD VOYAGER is located at Horta's modern Terminal Marítimo. Small cruise ships and the ferries that regularly commute between Faial and Pico dock there. Our captain has ordered three Zodiacs to be deployed. 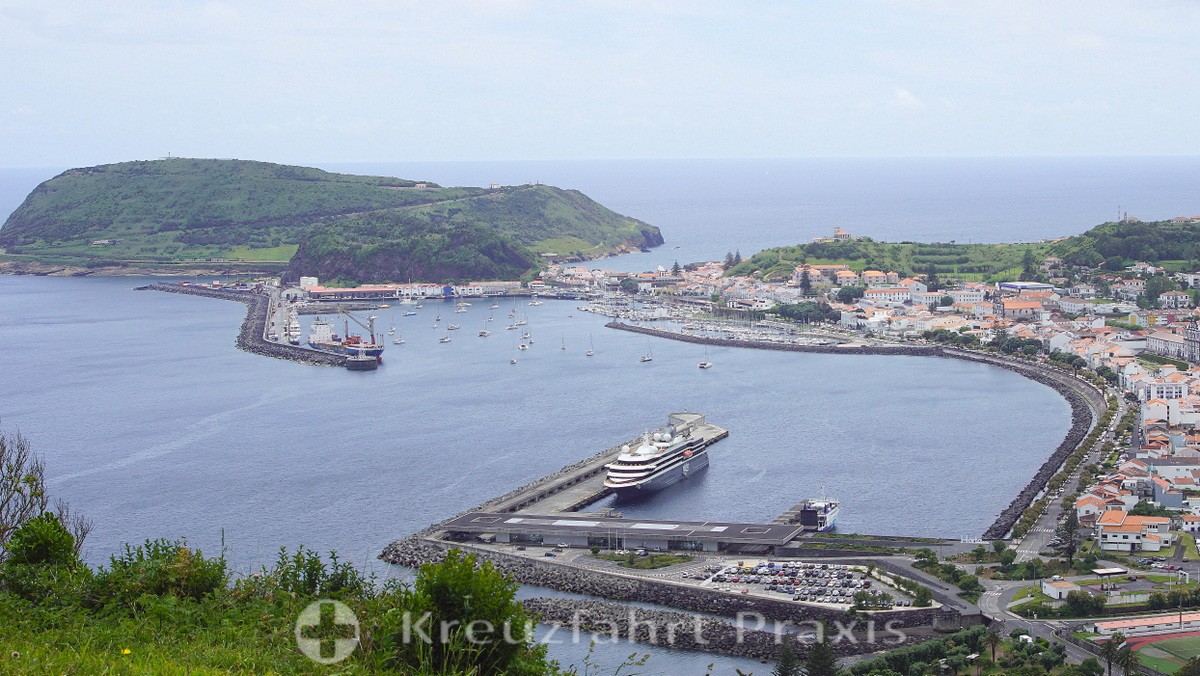 In the foreground, Horta's ferry and cruise terminal 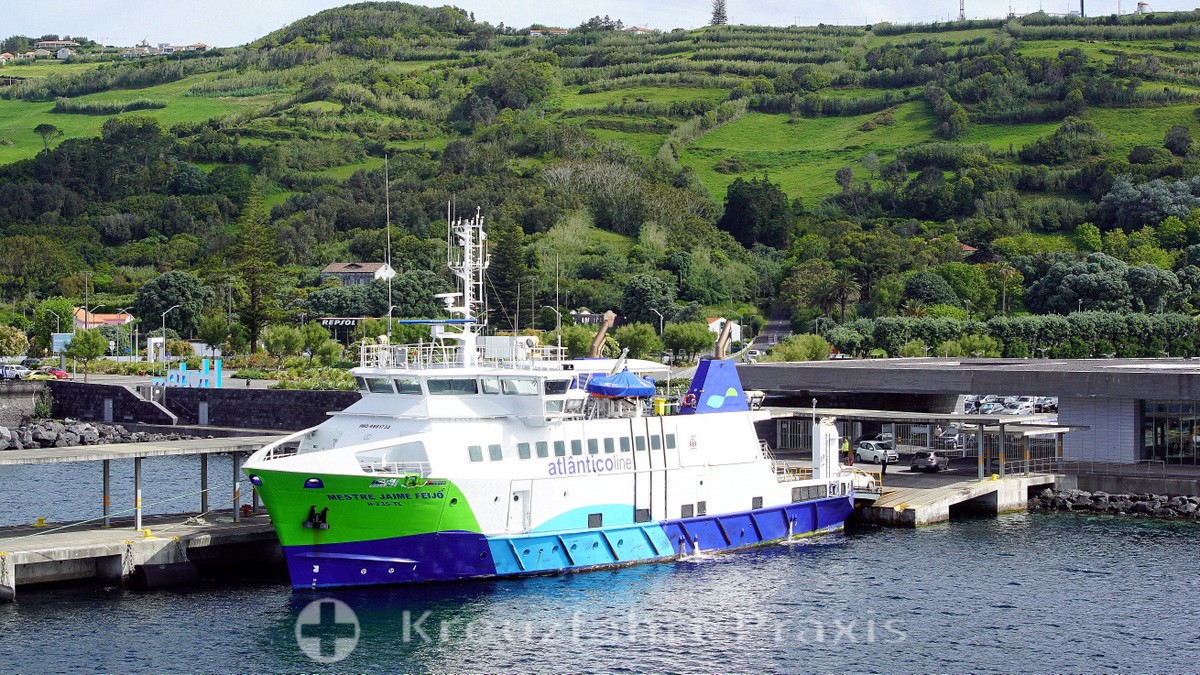 The boatmen circumnavigate the outer pier and set course for the first goal, a cave that can be navigated by rubber dinghies. Besides us there are birds and crabs in the cavity. In front of the cave are some Portuguese galleys, a kind of sea bubble similar to jellyfish. They are particularly noticeable because of their comb-like "sails". Swimmers should beware of the creatures' poisonous tentacles. 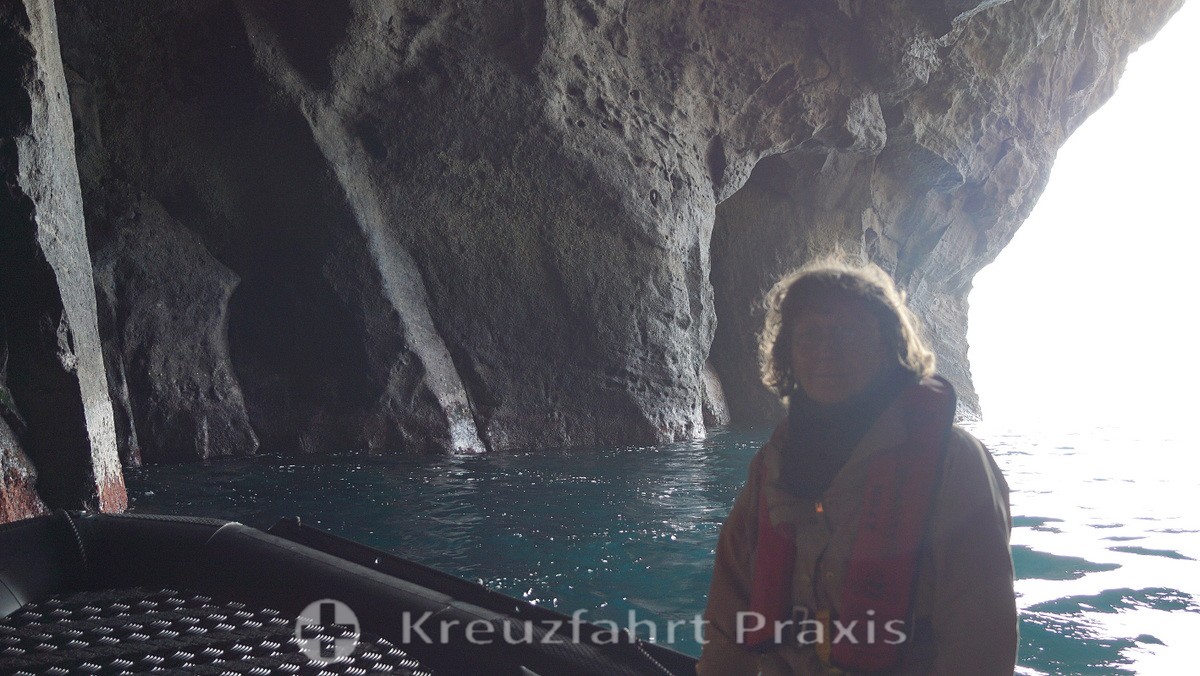 When the sea is choppy, our boat guide circles the Monte da Guia peninsula. We see the bright sandy beach of Praia Porto Pim to our right. In front of us lies a district of Hortas with the city wall from the 17th century and the historic city gate. Next to the stretch of beach we see the whale oil factory, which is now called the Museu da Baleia. In the museum visitors learn interesting facts about sperm whales and the whaling history of Horta.

It takes several days to get to know Faial halfway. We are not given that much time. An organized, multi-hour panoramic trip by omnibus takes us to some of the island's top sights. The journey leads to the central crater, several viewpoints, the capelinhos headland and back to Horta. 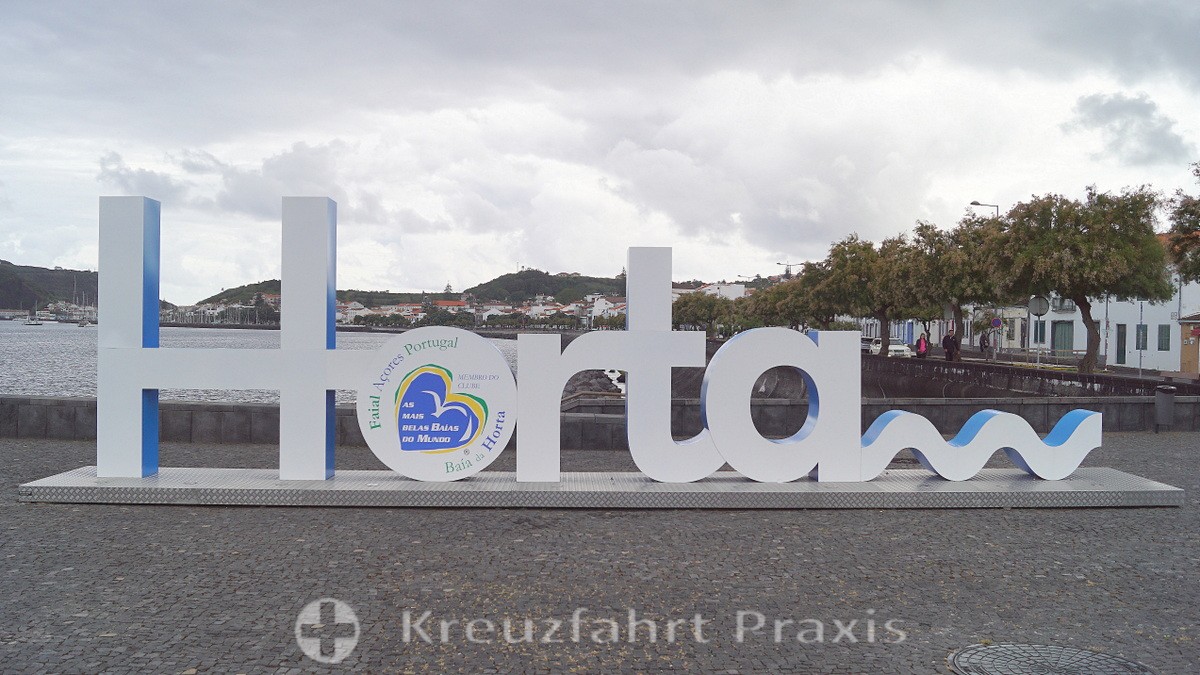 Horta - not to be missed

Conceiçao is a municipality that belongs to the district town of Horta and is located above the city. From the lookout point named after the Mother of God, visitors can enjoy the panoramic view over Faial. With a cloudless sky you can see Portugal's highest mountain, the Pico on the neighboring island of the same name. When the view is clear, the distant islands of Graciosa and São Jorge can also be seen. The city center of Horta with its eye-catching sacred buildings, the Azores parliament, the pleasure craft marina and the Marítimo terminal are closer. There is a marble monument to the Senhora da Conceiçao at the lookout point. The cross erected next to it rises 28 meters into the air.

Our next destination is the Miradouro Caldeira do Faial in the center of the island. After crossing a short tunnel we reach the lookout point. It grants visitors breathtaking views of the crater, which is 2.000 meters in diameter. The average depth of the funnel is estimated at 400 meters. Bay trees grow on the slopes of the Caldeira. The crater was formed over the past 500.000 years. We could hike around the Caldeira if necessary and with enough time. A seven kilometer long, spectacular circular route (PRC04 FAI) with an altitude difference of around 200 meters is ideal for this project.

The still young volcano Capelinhos follows the Caldeira. To do this, we leave the viewpoint, cross the recreational forest reserve Florestal de Recreiro da Falea and drive towards the north coast, past the village of Cedros and the church of Santa Bárbara. Then the journey leads to the westernmost tip of the island, the lighthouse, the Vulcão dos Capelinhos and the interpretation center. 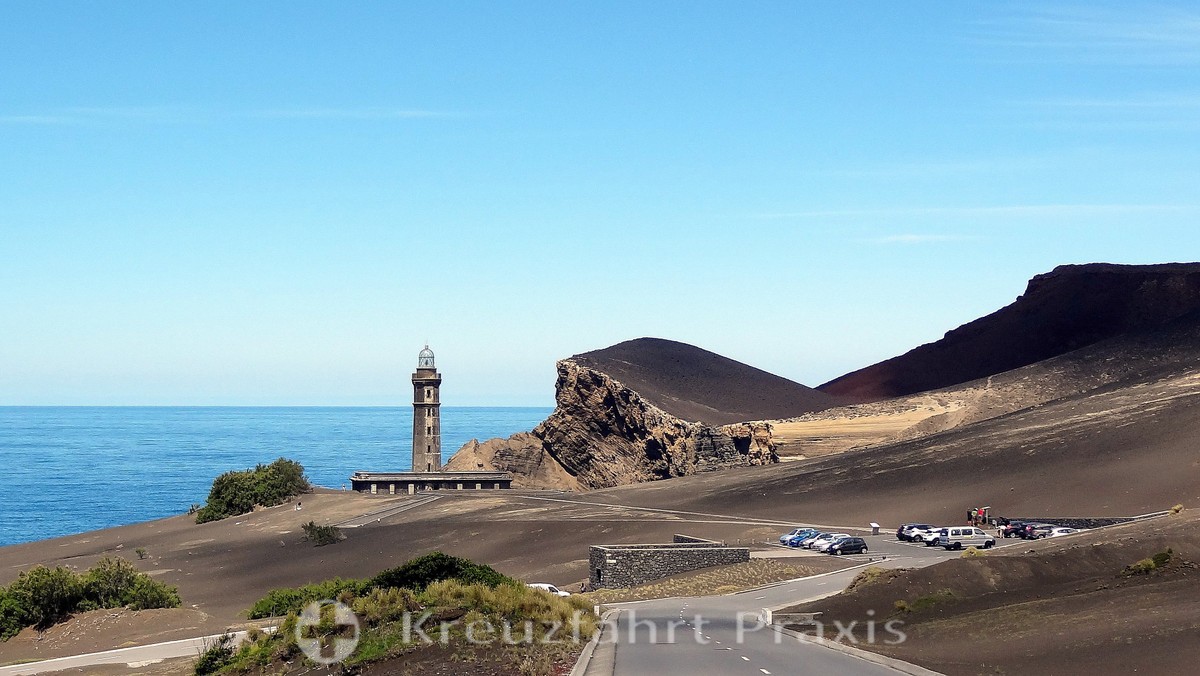 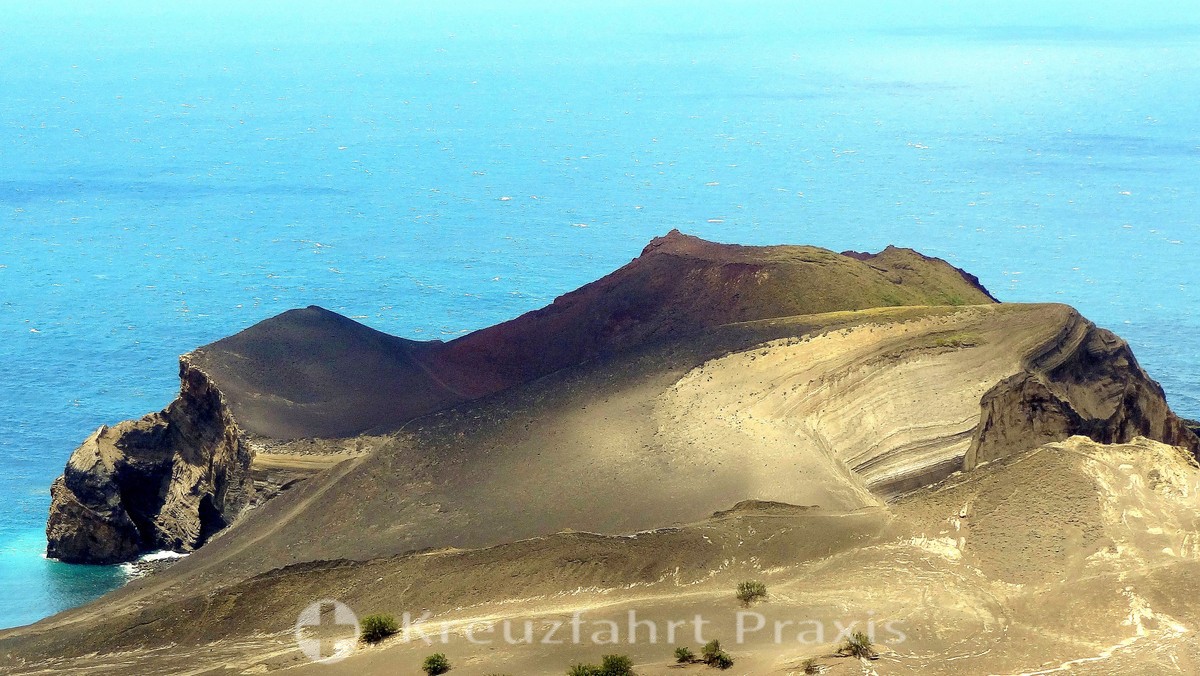 The volcano's first eruption took place in September 1957. It took a total of 13 months for the earth to calm down. The volcanic eruptions are among the best-documented eruptions in the world. By the end of the eruptions, Faial had gained two and a half square kilometers of area. In the modern interpretation center, the discharges and their consequences are explained to the visitors using audiovisual means.

The way back leads first along Faial's west coast and then along the south coast. There we pass the Castelo Branco at the Ponta do Morro. There is no time to get out. The striking rock massif Castelo Branco, the "white castle", is a volcanic formation. The rock shows up in brilliant white when the sun is shining. A bizarre coastline with steep cliffs follows the massif. 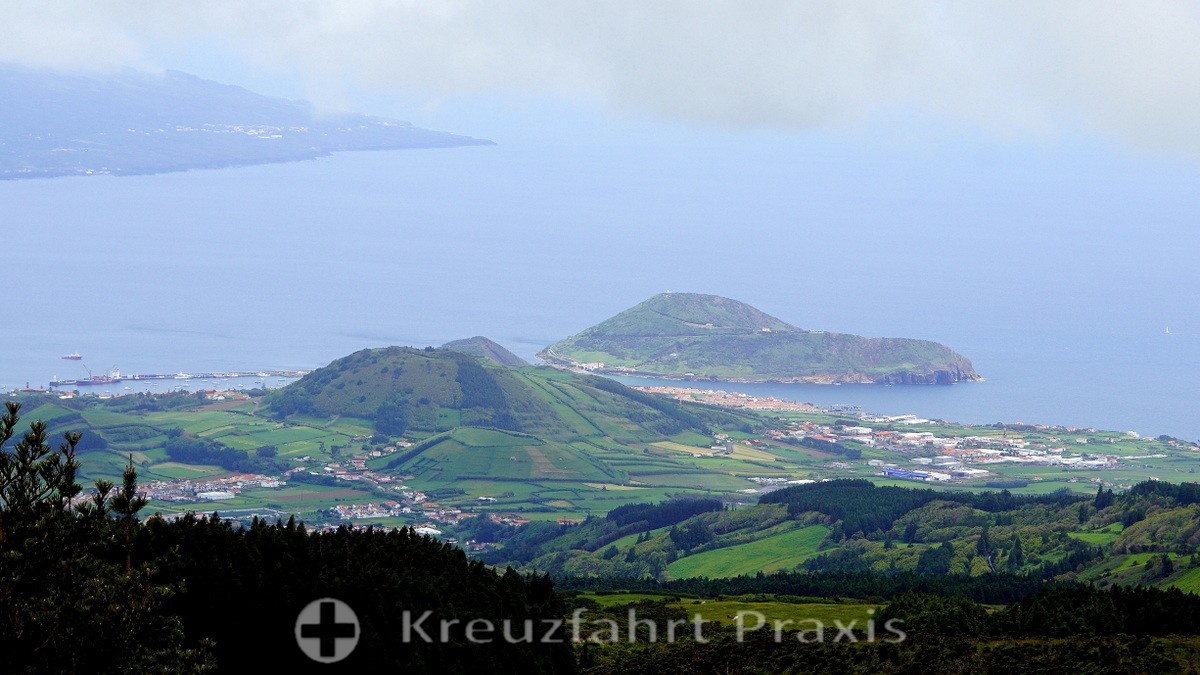 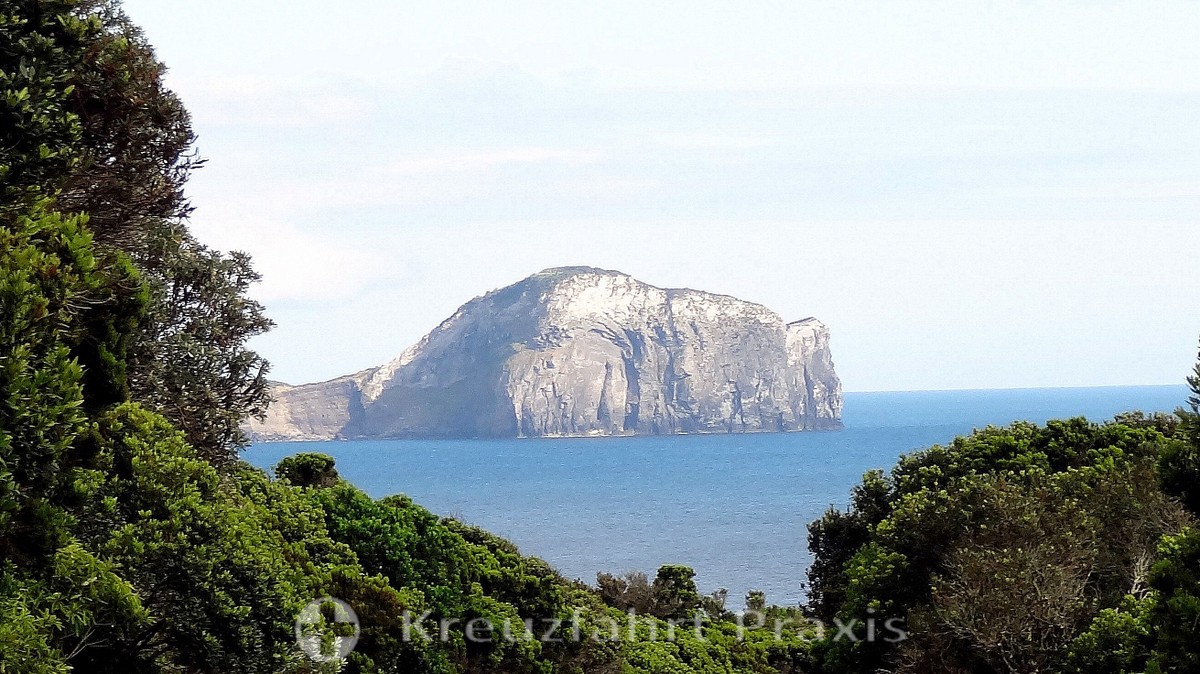 Discover Horta on your own

At the end of the tour, the bus stops in the center of Horta. Guests who want to stretch their legs in town are allowed to leave the bus. If you don't like that, you will be brought back to the ship. We use the time out and look around in Horta's center. Then we cover the almost two kilometers to the WORLD VOYAGER on foot on the well-tended promenade. In Horta we forget for a short time that we are on vacation during Corona times.

Since the beginning of seafaring, Horta has been on common shipping routes. The small town has long been an intermediate destination for those sailors who sail across the seas in offshore yachts. Horta's harbor offers everything that yacht owners need: enough berths, repairs, fuel, water supply, provisions and more. As a thank you, the crews left more or less skilful paintings in the public space. Legend has it that sailors who do this will get to their destination safely. The various representations testify to the superstition of the sailors. 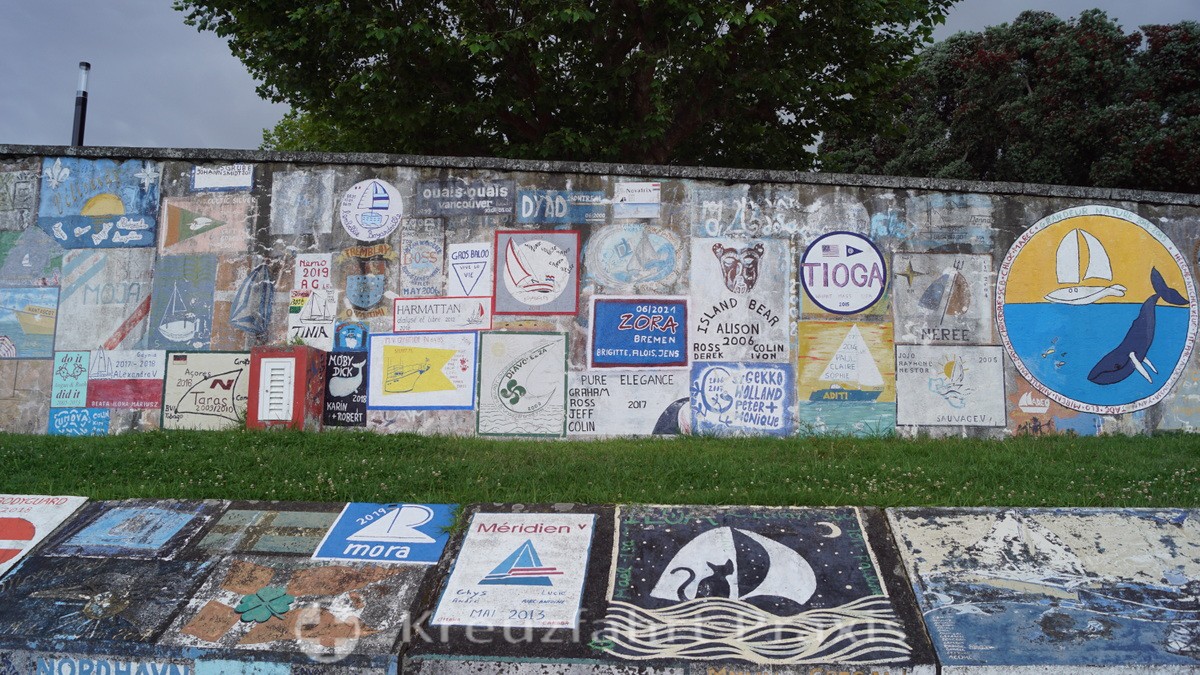 Horta - traditional paintings of the sailors 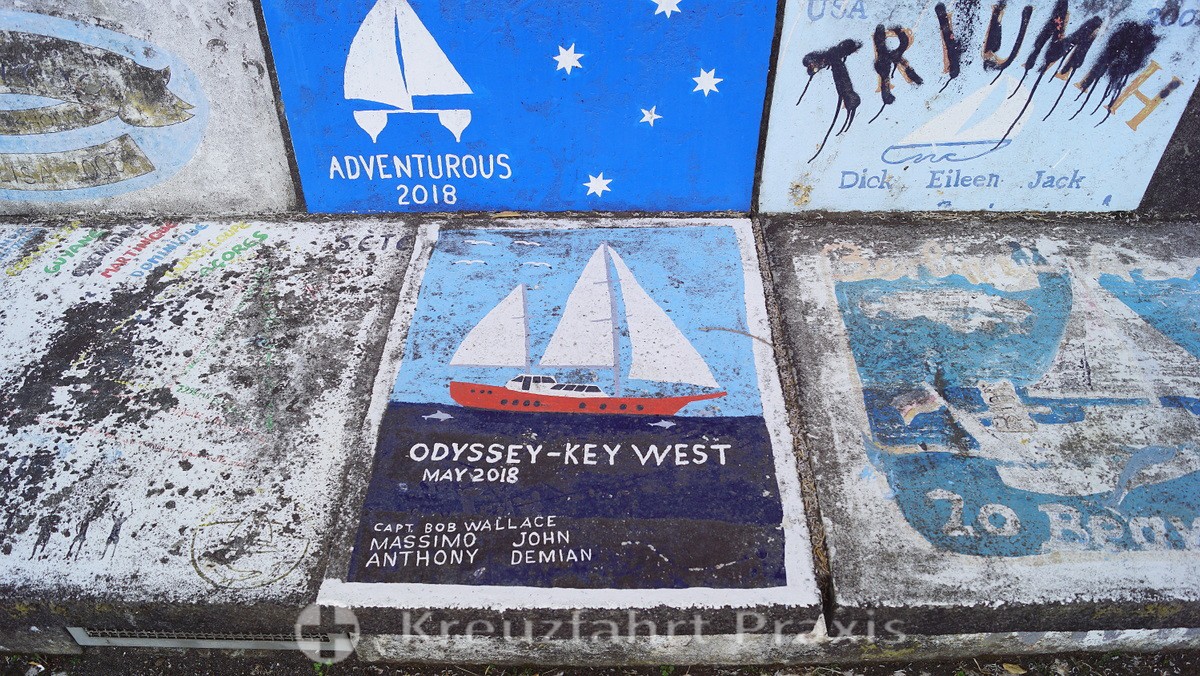 Horta - traditional paintings of the sailors

The Peter Café Sport is a Horta institution for locals, tourists and the sailing community. The quaint pub, which is now in the fourth generation of the family, has existed for more than 100 years. Round-the-world sailors, journalists and writers have made the traditional institution world-famous. In the past, the sailors used the café as an exchange office, post office, information office, weather station ... 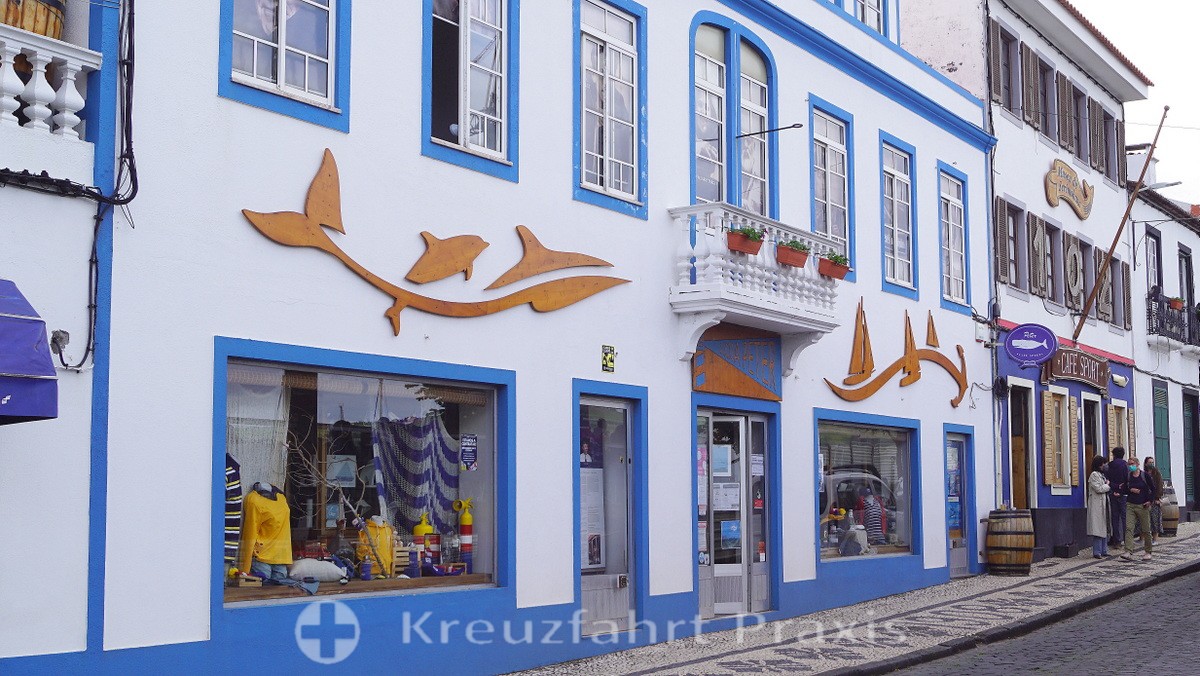 The three-aisled church is located in the Horta district of the same name. The church facing away from the sailing harbor stands at the site of the former Santa Cruz chapel. The bones of the city's founders rest in the church. In the 19th century the church was built in neoclassical style. On the outside, stone blocks made of black basalt give the church a memorable appearance. The interior is dominated by rich paneling, gilded carvings and mahogany furniture. Nossa Senhora das Angústias owns a rich collection of statues. The main attraction is the sculpture of the saint. 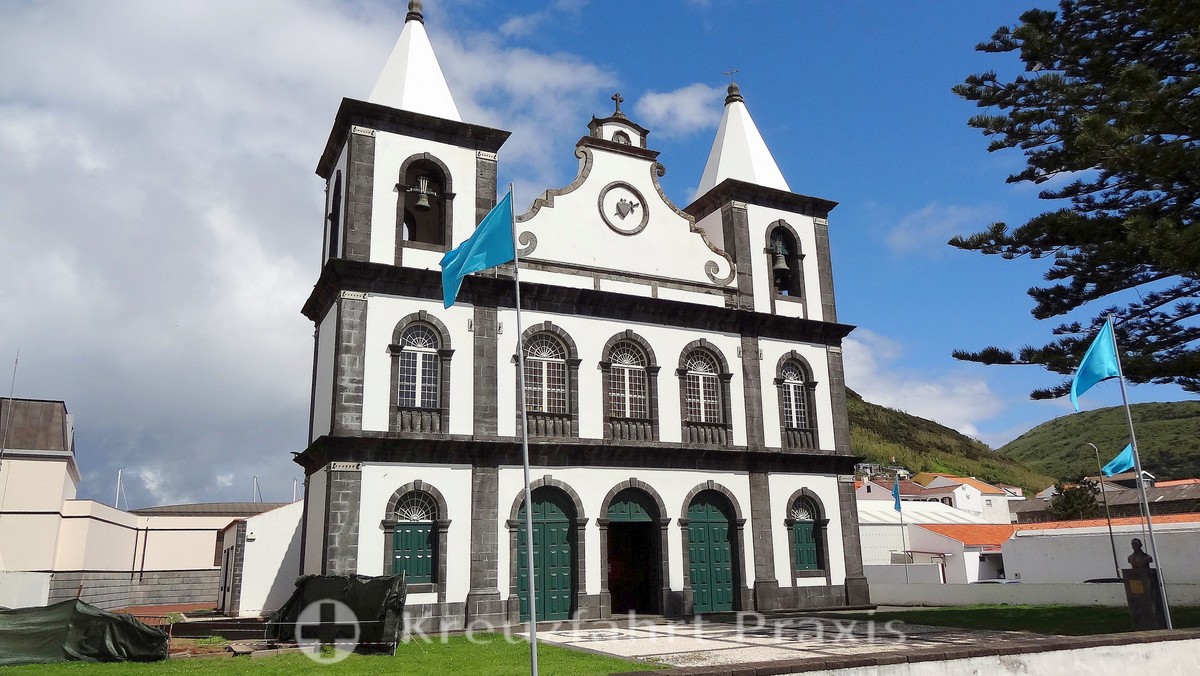 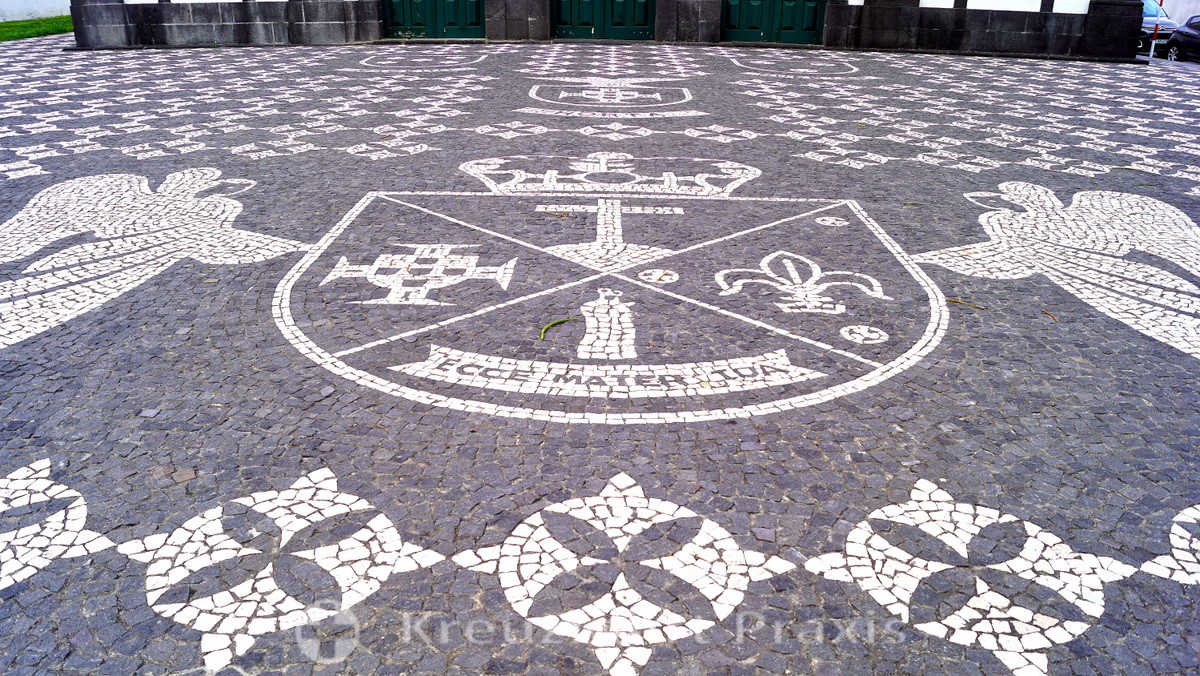 The Forte de Santa Cruz da Horta overlooks the historic port. The fortress was built in the 16th century along with two other bastions to defend the port. The fort is a Portuguese national monument. Within its walls is the Pousada Forte da Horta. 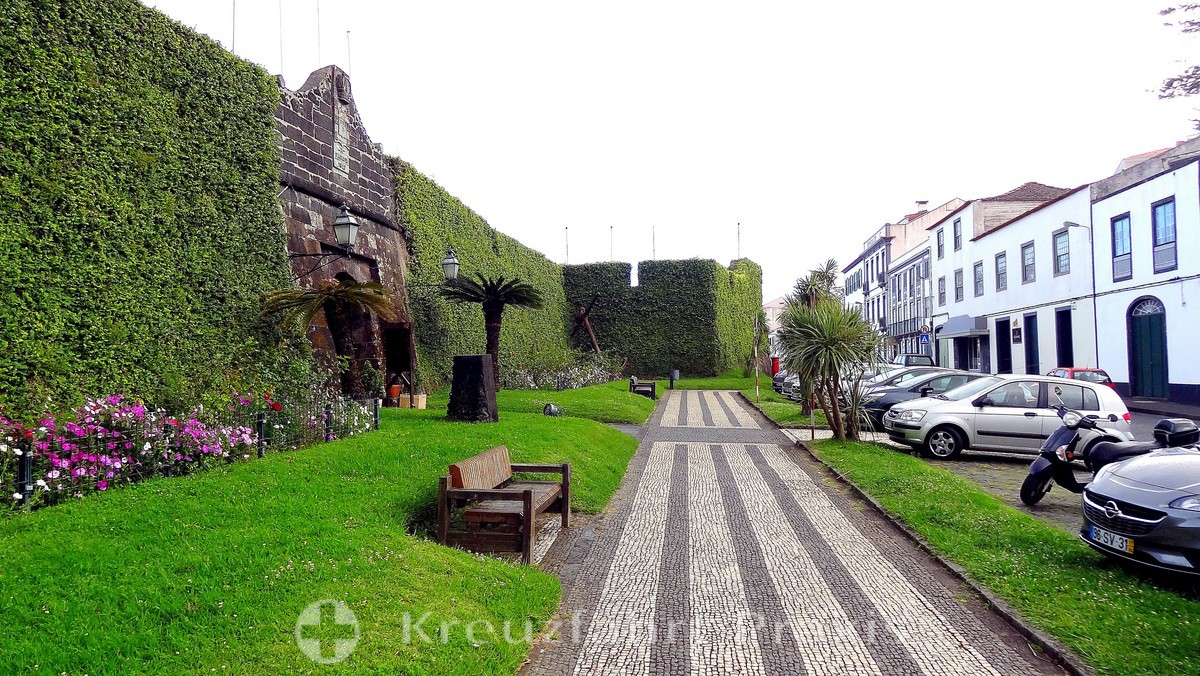 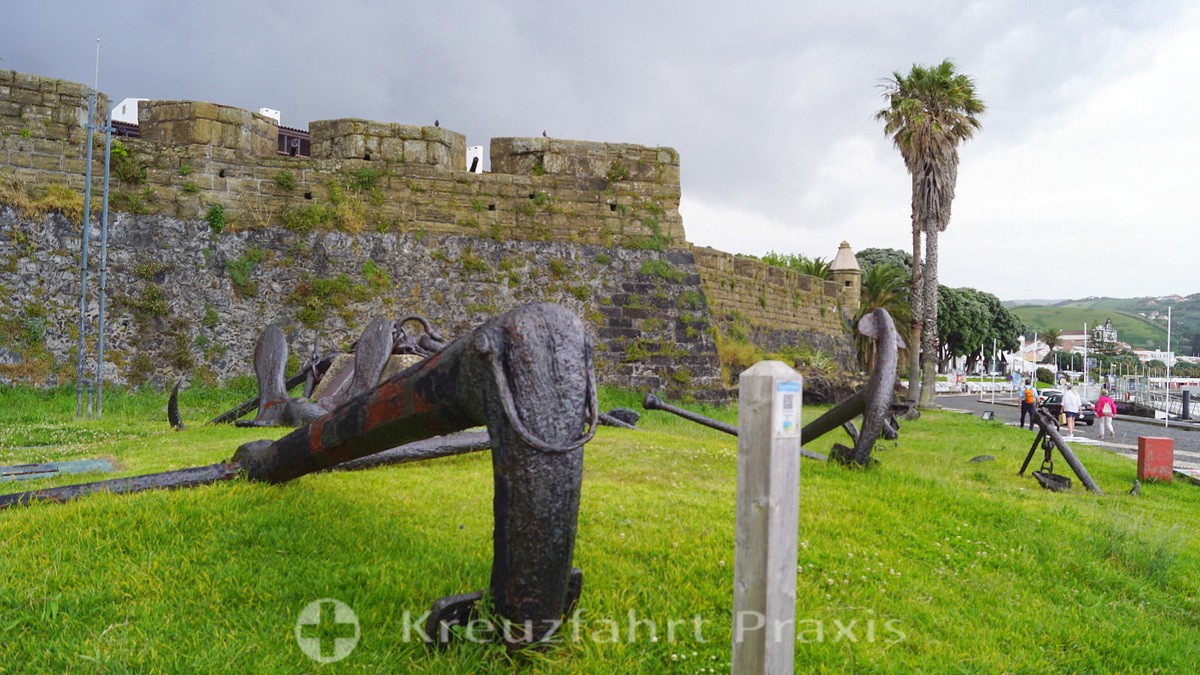