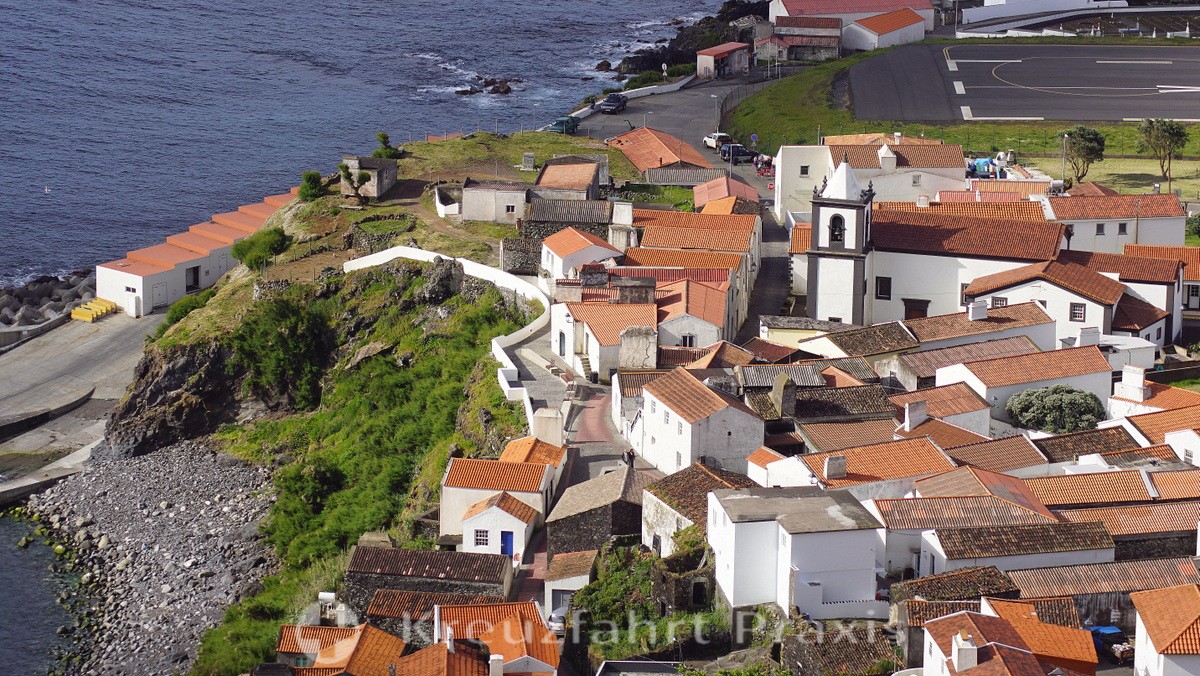 Our destination is Corvo, the smallest island in the Azores. Geologists divide the Azores into three groups: the eastern, central and western parts. The western part is made up of two closely spaced islands: Flores and Corvo. We present the latter. - From the geologists' point of view, Flores and Corvo are on the North American plate, so they belong to the American continent. From a European point of view, they are the last corner of Europe. 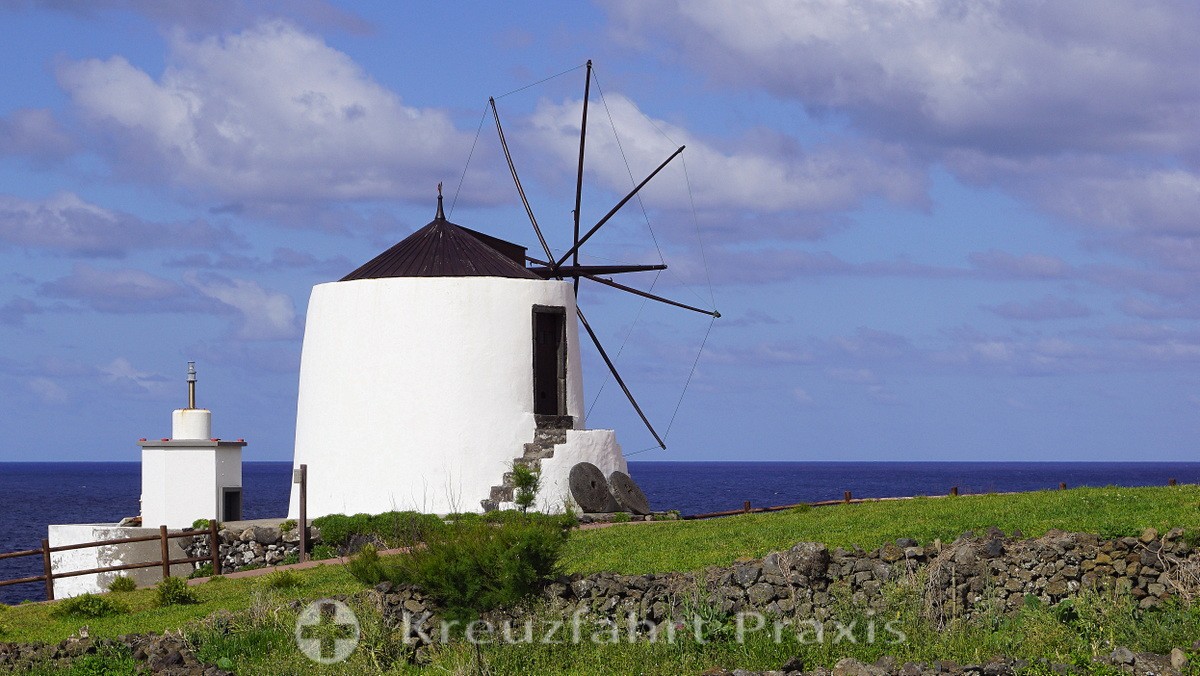 Corvo - Windmill in Vila do Corvo

Corvo in facts and figures

Corvo, the name stands for raven in Portuguese, is the most insignificant of the nine inhabited Azores islands with an area of ​​just 17 square kilometers. Corvo's only settlement is Vila do Corvo. The community received city rights in 1832; it is considered the second smallest city in Europe. It is curious that Vila do Corvo has all the necessary communal facilities: church, school, pharmacy, fire brigade, police station, port and airport. There should even be a prison. However, the place does not have an administration. The infrastructure is maintained through state subsidies. 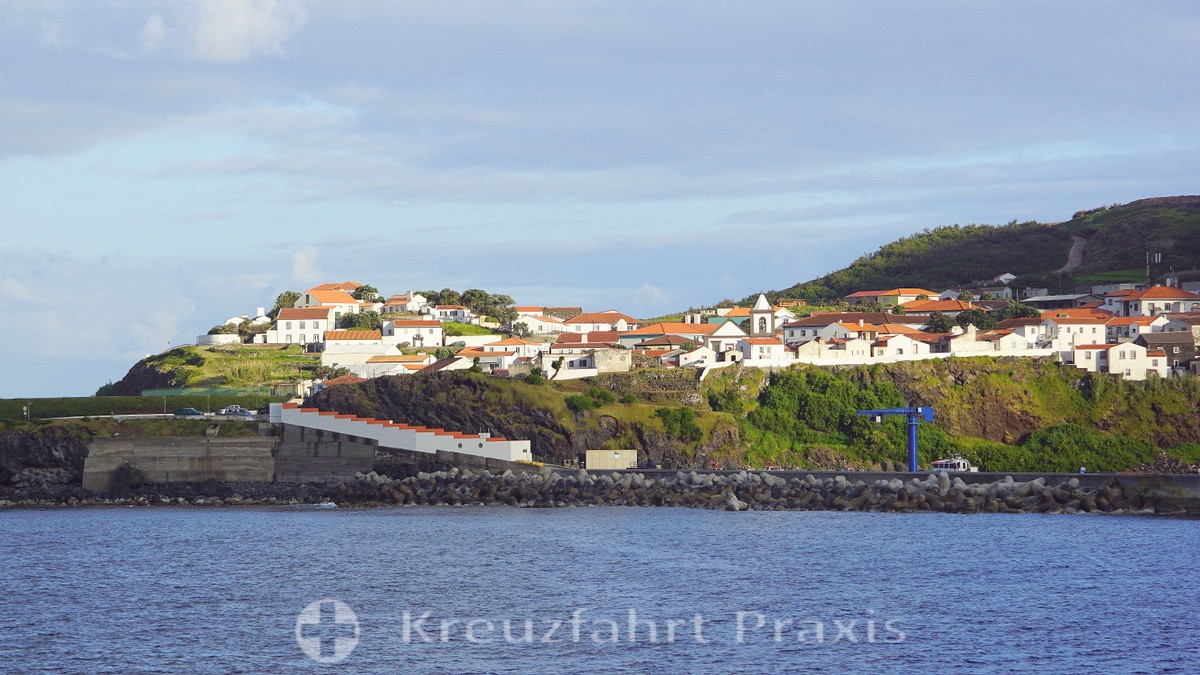 Vila do Corvo seen from the ship 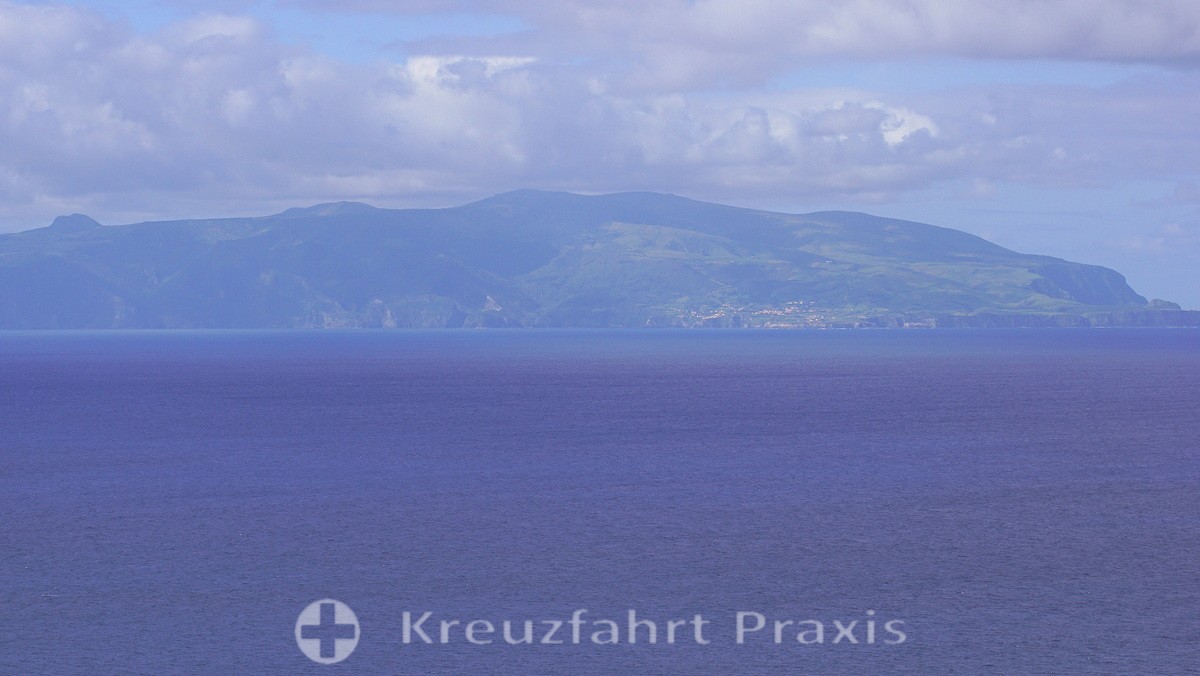 Corvo and Flores were probably discovered in 1452 as the last of the Azores islands. It is believed that in the 16th century slaves were brought to Corvo from Cape Verde for the purposes of agriculture and cattle breeding. At the end of the 16th century, residents of the neighboring island of Flores settled on Corvo. In the middle of the 19th century there were almost 1.100 inhabitants on the island. The people lived in modest circumstances in a confined space. They had to cope with the little that agriculture and fishing offered. Between

Potatoes, grain and citrus fruits are grown for the self-sufficiency of the population. Above all, however, there is intensive livestock farming. There are far more cattle than residents; Cattle are part of the landscape all over the island. Meat, milk and cheese are Corvo's only export goods. Tourism makes a modest contribution to the well-being of the population. There is no hotel; only a few guest rooms are rented out. 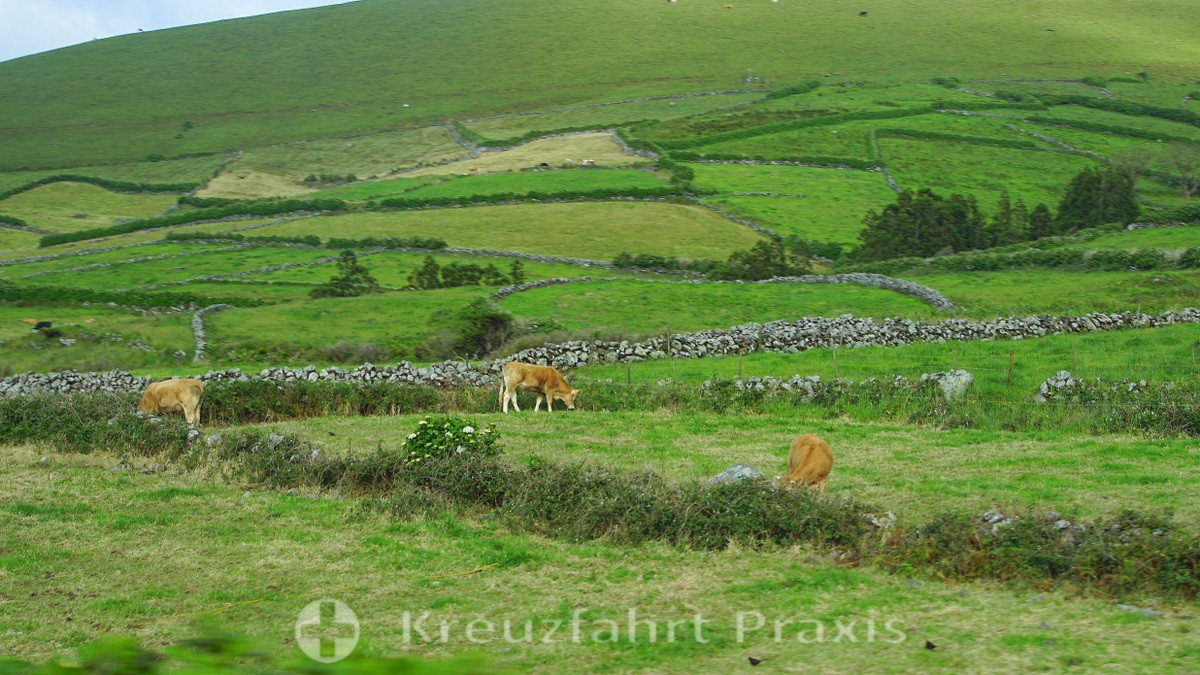 In 2007, UNESCO added Corvo to the list of biosphere reserves. In the model region, according to the specifications of the world organization, sustainable development in ecological, economic and social terms is to be achieved.

The sights of Corvos

Basically, Corvo is a barren but green volcanic island with a remarkable caldeira. If you disregard the flatter south, steep cliffs characterize the landscape. However, this is nothing compared to the caldeira formed by an extinct and collapsed volcano. It is the main attraction of Corvo. Also worth seeing are the church, the black lava walls of the pastures and the windmills next to the airport.

The main attraction of Corvo is the Caldeirão, which is 2,3 kilometers wide and more than 300 meters deep. The crater was created by the eruption of a volcano. Geologists register about 20 small volcanic cones on its slopes. On the level of the crater, in the middle of a yellow-green landscape, lies the lake Lagoa do Caldeirão. Cattle graze on the surrounding steep slopes of the funnel.

Hikers use the five-kilometer-long marked hiking trail within the Caldeira. It is difficult to walk as the ground is swampy and full of holes. "Sehleute" like us enjoy the view of the natural spectacle from the Miradouro do Caldeirão. The vantage point is on the eastern edge of the crater at a height of 540 meters. The highest point on the island is the Zona Estreitinho, 720 meters above sea level, with the Morro dos Homens.
On clear days, shuttle buses bring visitors from the small port to the Miradouro if necessary.

The single-nave, white-painted church was first built in 1795. The church has two altars. The patron saint of the church is Nossa Senhora dos Milagres, the “Miraculous Virgin Mary”. A statue from the 16th century is dedicated to her. How the Flemish work came to Corvo is not known. Also admirable is the marble crucifix from the 17th century.

Corvos Ecomuseum has existed since 2013. The facility is officially described as a museum and a development project. It describes Corvo's historical legacy, the development of the site and the standard of living of the island's residents. In a dynamic process, the safeguarding, interpretation and management of the cultural heritage are to be ensured and sustainable development promoted. 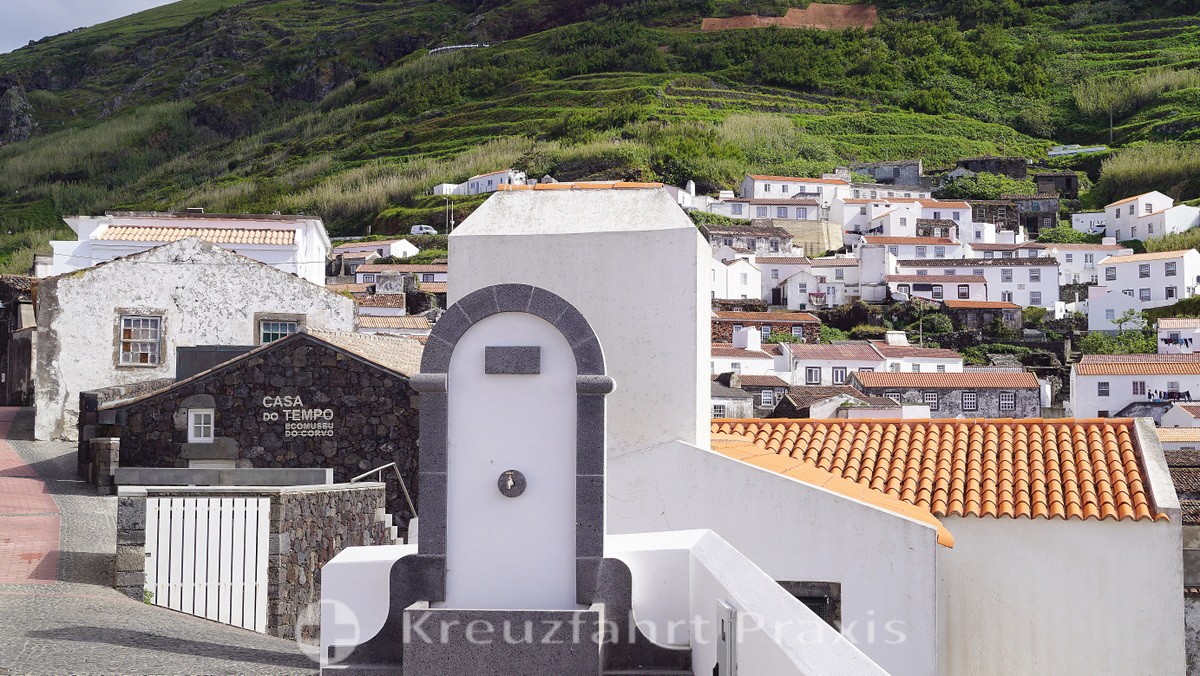 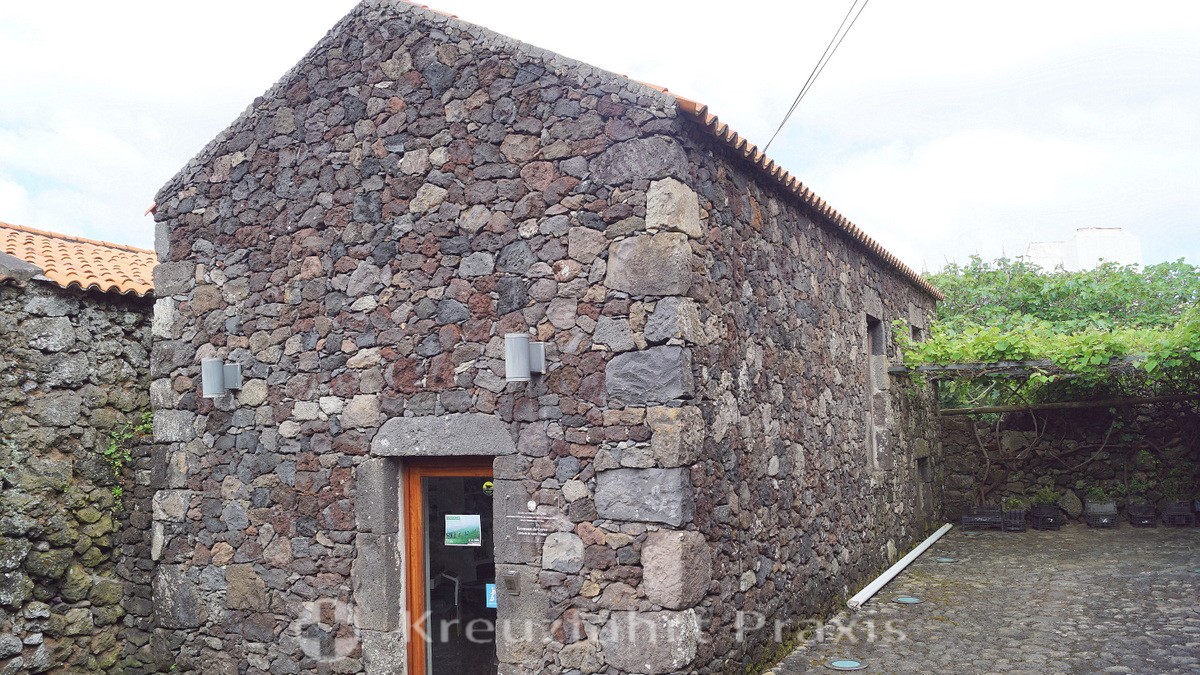 In the south of the island, close to the 800 meter long runway of the airport, there are three windmills on the Alto dos Moinhos. They were built in the late 19th and early 20th centuries. The windmills are similar to buildings on the Portuguese mainland. 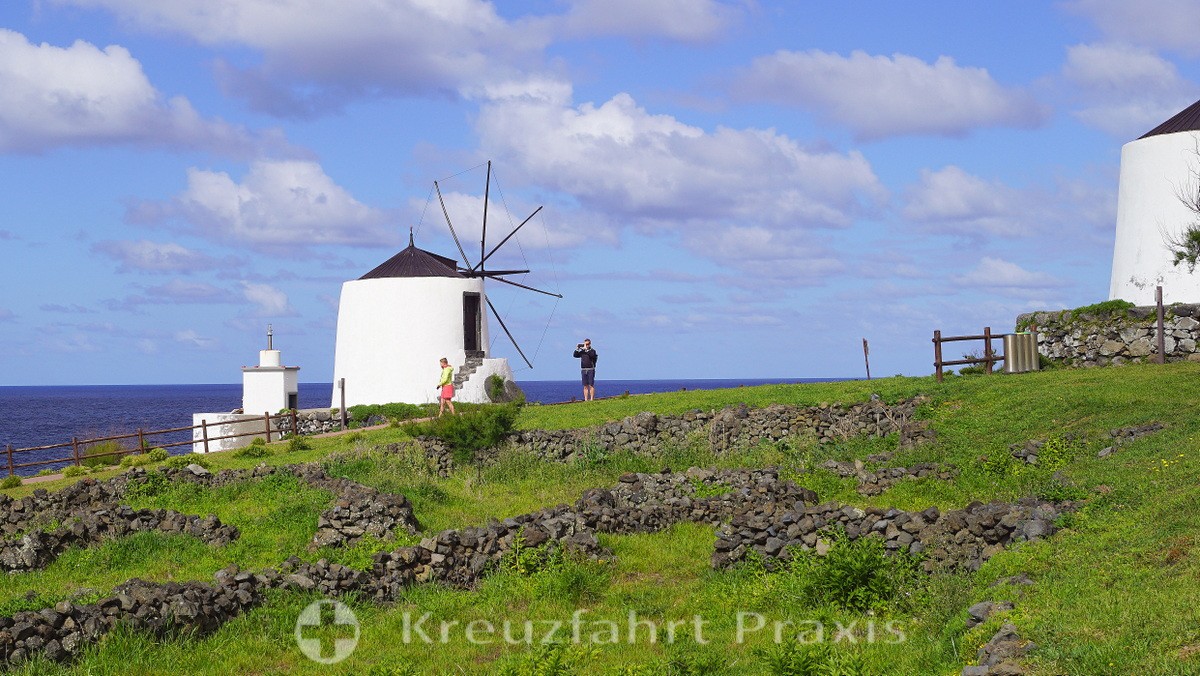 The windmills of Vila do Corvo 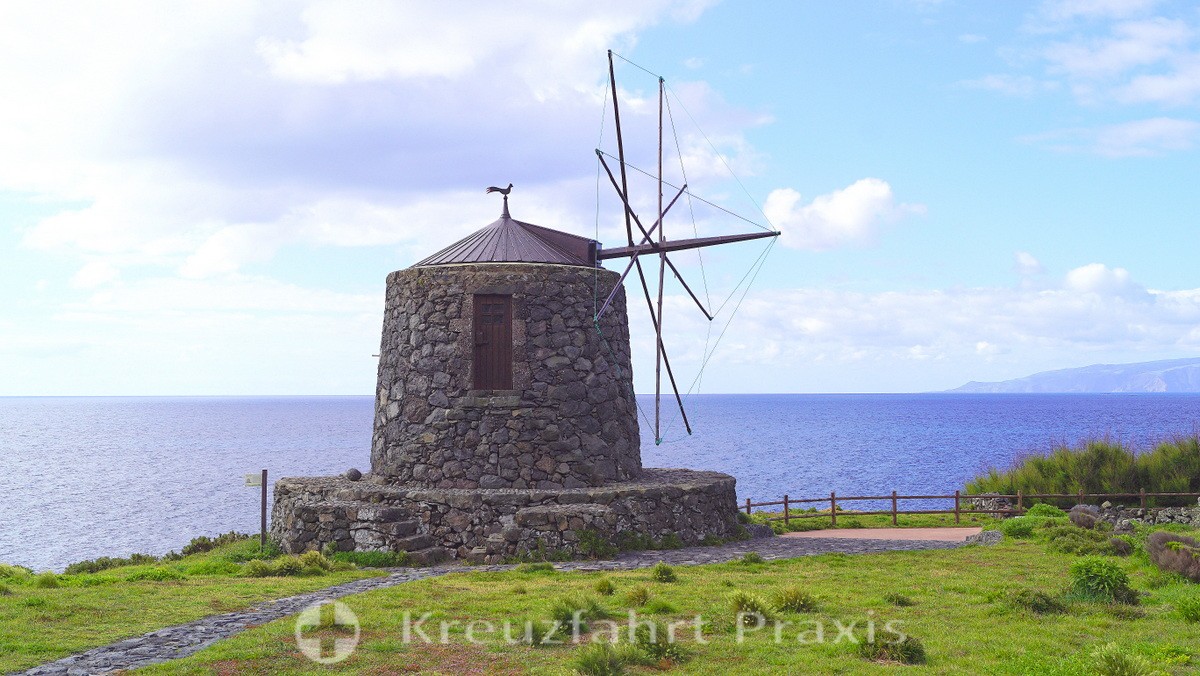 Windmill in Vila do Corvo

In the extreme southwest of the island, in front of the airport runway, is Praia da Areia. Where the whalers once had their base is the insignificant, black-sand beach on the rugged rocky coast. It is Corvo's only stretch of beach. There is also a natural swimming pool. 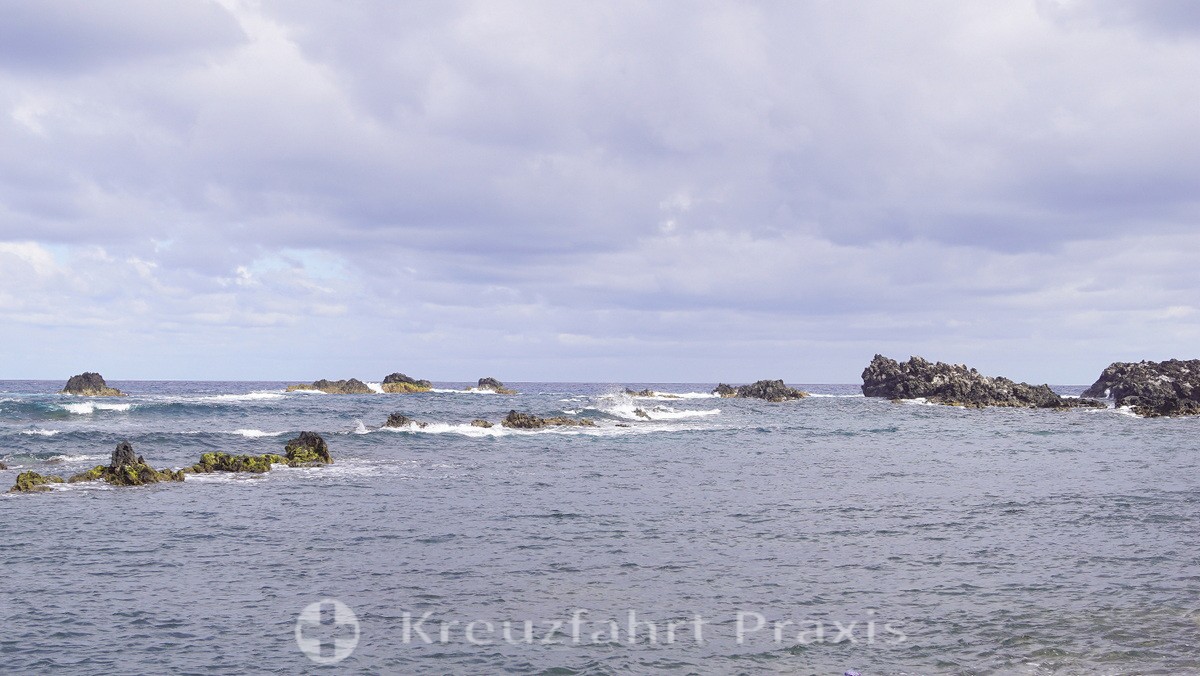 How do visitors come to Corvo?

Corvo and São Miguel, the main island of the archipelago, are 530 kilometers apart as the crow flies. There is a little more than 15 kilometers between Corvo and the neighboring island of Flores. Ferry ships and planes operated by the state-owned SATA Air Açores visit the island regularly. The 800 meter long runway on the southern edge of Corvo is right next to the town. We visit Corvo as part of an Azores cruise on the expedition ship WORLD VOYAGER. 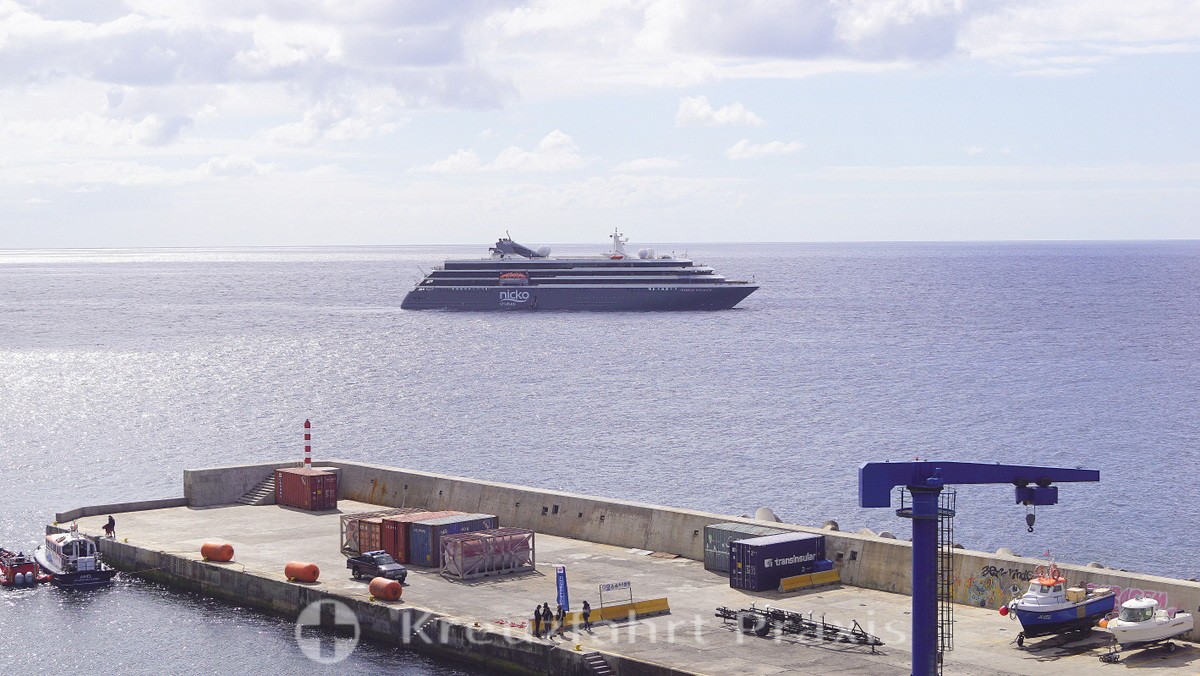 WORLD VOYAGER in the roadstead in front of Corvo

During the round trip in the Corona year 2021, we get to know eight out of nine of the inhabited Azores islands.