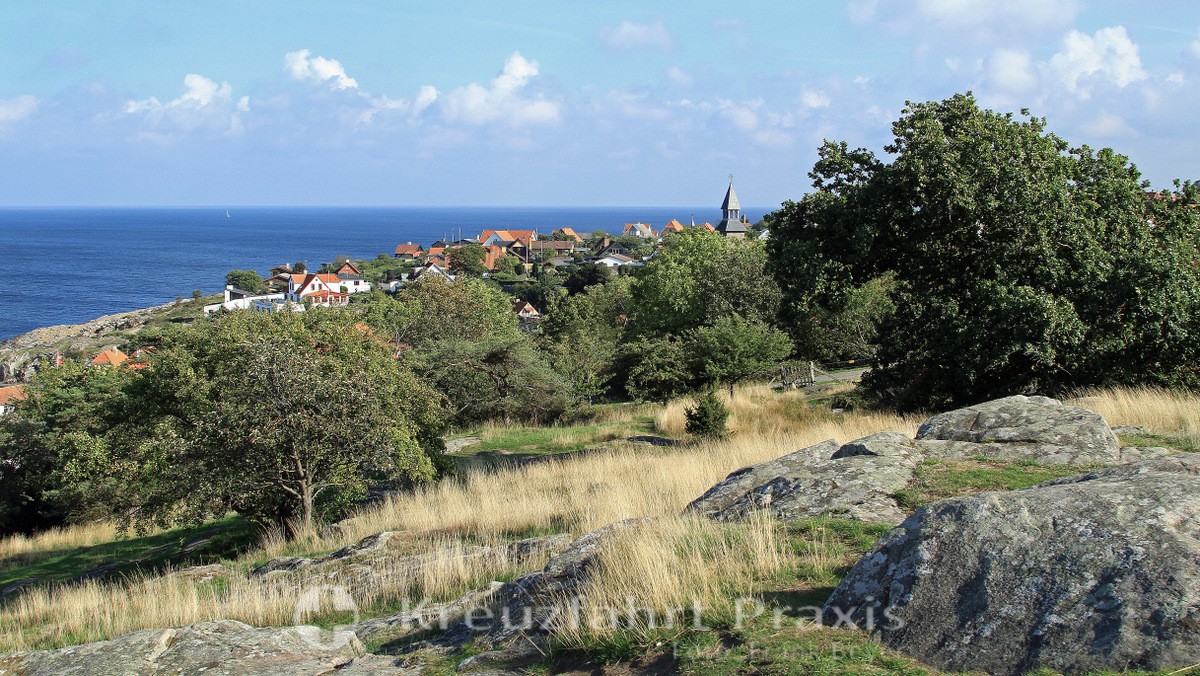 The readers of the globally esteemed travel magazine Condé Nast Traveler awarded the island of Bornholm the second place among Europe's holiday islands in 2019. This rating would not have been necessary: ​​Bornholm enchants its residents and the annual average of more than 600.000 tourists with beautiful landscapes and delightful port cities. Impressive buildings are the ruins of Hammershus Fortress and the four round churches. The island offers its visitors much more: the attractions include beautiful landscapes, picturesque places, sandy beaches and the island's capital Rønne. 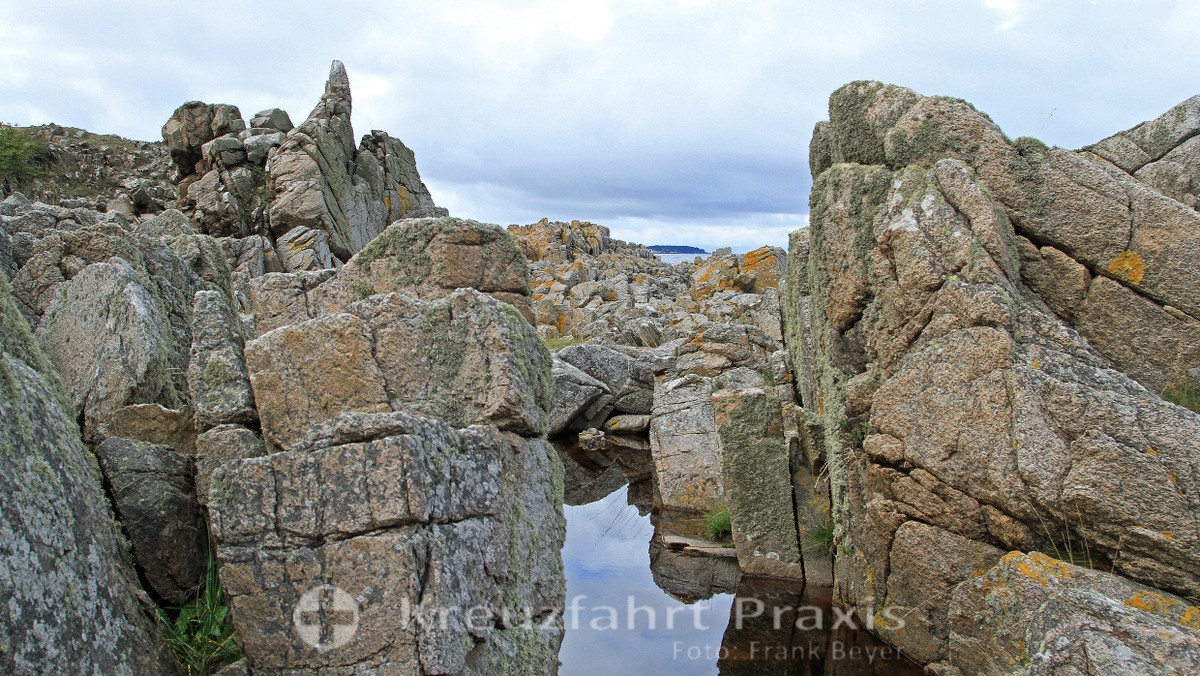 A landmark of the island is the Hammershus fortress built on the cliffs in the north-west of Bornholm. The complex is considered to be the largest castle ruin in Northern Europe in terms of area. The Archbishop of Lund in Sweden had the castle built at the beginning of the 12th century as a church power center. After that, the fortress was set up for defense purposes. With the advent of new, effective weapon technology, Hammershus lost its function in the 17th and 18th centuries; the facility was abandoned and fell into disrepair. The Bornholmer used the decay to build houses from the stones of the complex. In 1822 the state put Hammershus under monument protection.

The ruins are currently being intensively restored. The fortress also received a modern visitor center. In addition to an informative exhibition, it has seminar rooms and a café. During the season there are two-hour, German-speaking guided tours on the castle grounds on Wednesdays.

Denmark has a total of eight round churches. Four of these round churches are on Bornholm. Round churches were originally fortified churches. The churches with walls more than two meters thick were built in the late Middle Ages to protect against pirate attacks. We particularly like two churches: the Østerlars and the Nylars round church.

The Østerlars round church, located in the northeast of the island, is the largest and best known of the round churches on Bornholm. Every year more than 100.000 people visit the oldest of the four fortified churches. The building, dedicated to St. Lawrence, was probably built in the middle of the twelfth century. The walls of the church, which are more than two meters thick, consist of granite stones outside and inside. Gravel and earth were filled in between the stones. Seven massive retaining walls surround the building.

In the interior, the diameter is 13,20 meters, a pillar supporting the upper floors rises up. The church has a total of three levels. The third floor is surrounded by a battlement. The conical roof was not added until the 16th century.

The church named after St. Nicholas is located in the southwest of Bornholm. It was created at the same time as the Østerlars kirke. The masonry is constructed similarly to that of Østerlars. However, retaining walls were dispensed with when the comparatively smaller church was built. The inner diameter is eleven meters. In the Nylars kirke, too, a central central pillar supports the two floors above. Frescoes frame the supporting pillar. 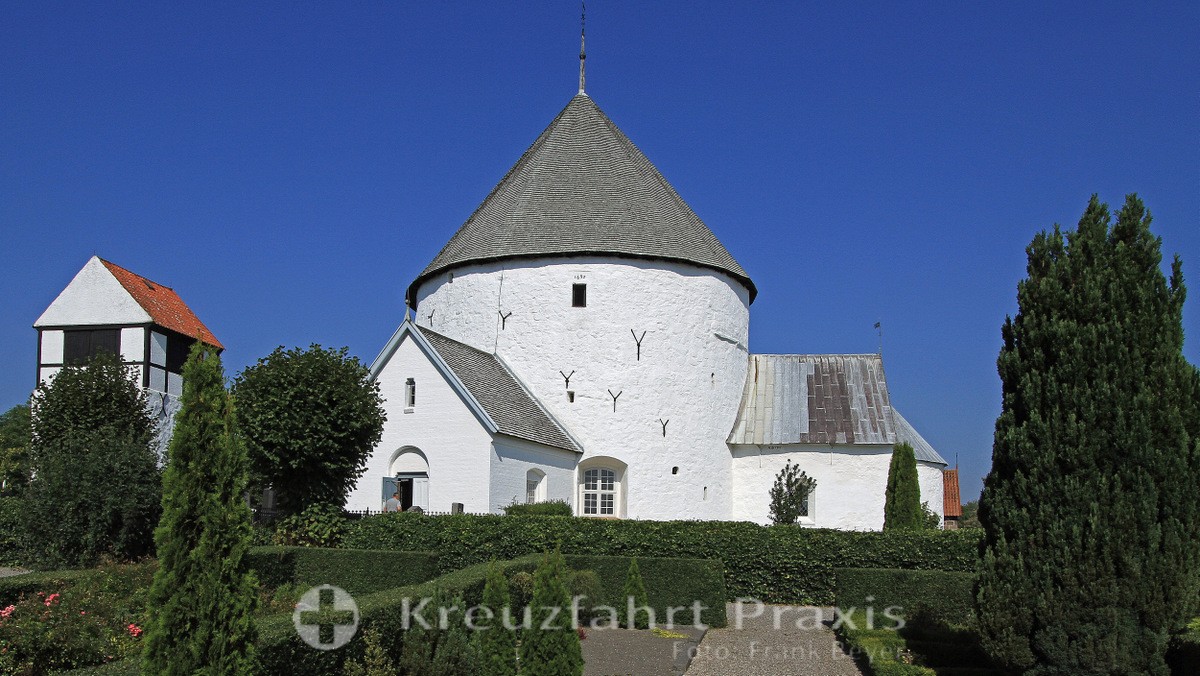 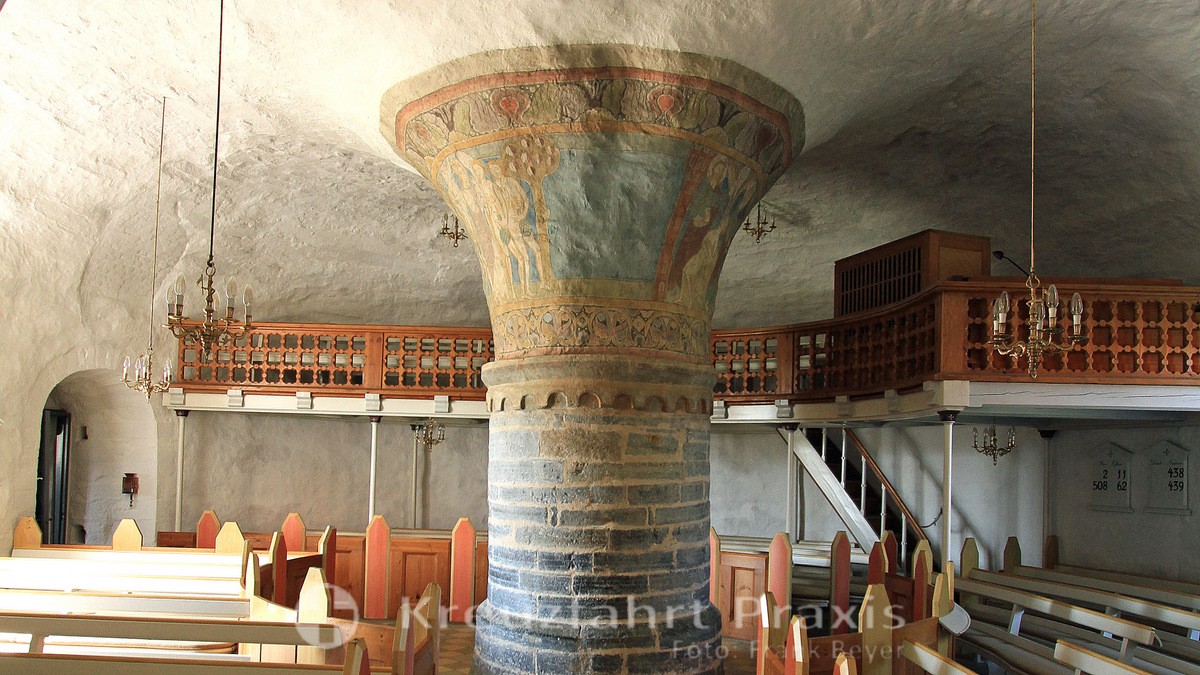 Central pillar of the Nylars round church

Originally, the current conical roof was missing. Instead, the Nylars kirke had a flat roof with a parapet walk around it. The conical roofing made of oak shingles was also given to the church in the 16th century. As with the other Bornholm round churches, the bell tower stands apart on the cemetery grounds.

Visitors to Bornholm not only appreciate the year-round balanced climate, good food and the proverbial hospitality of its residents. The diverse and varied landscape is also one of the island's assets. The Hammerknuden, Bornholm's northernmost region, Almindingen forest, Denmark's second largest contiguous forest, beautiful lighthouses and Dueodde beach are well worth seeing. The offer seems inexhaustible and the choice is difficult. Our Bornholm favorites are:

In the north-west of the island lies the extensive nature area of ​​the Hammerknuden or Hammeren, as the Bornholmers say. The Hammerknuden area was formed by the Ice Ages. Today the area is exposed to wind and weather. Low-growing trees, bushes and heather characterize the landscape. In the 19th and 20th centuries, granite stones were broken in the region and transported to the mainland.

Hammersø, measuring 650 by 150 meters, lies in the middle of the karst mountain landscape. Opalsø lies next to it, separated by a headland. The lake is a former granite quarry filled with water. 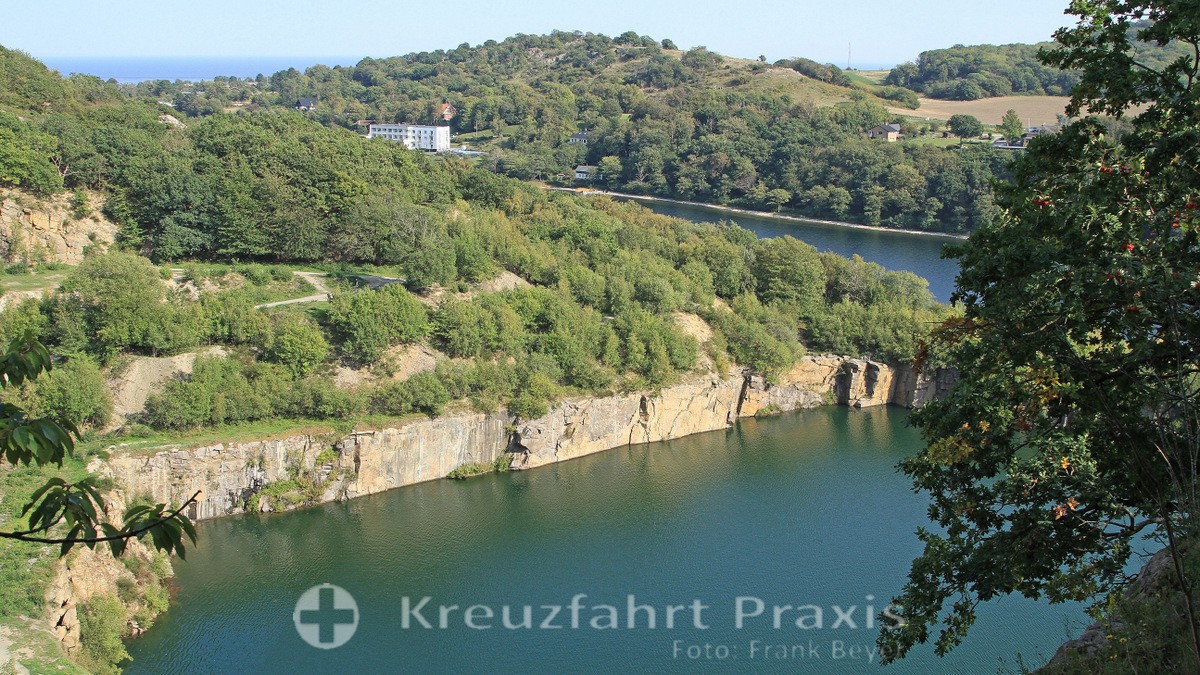 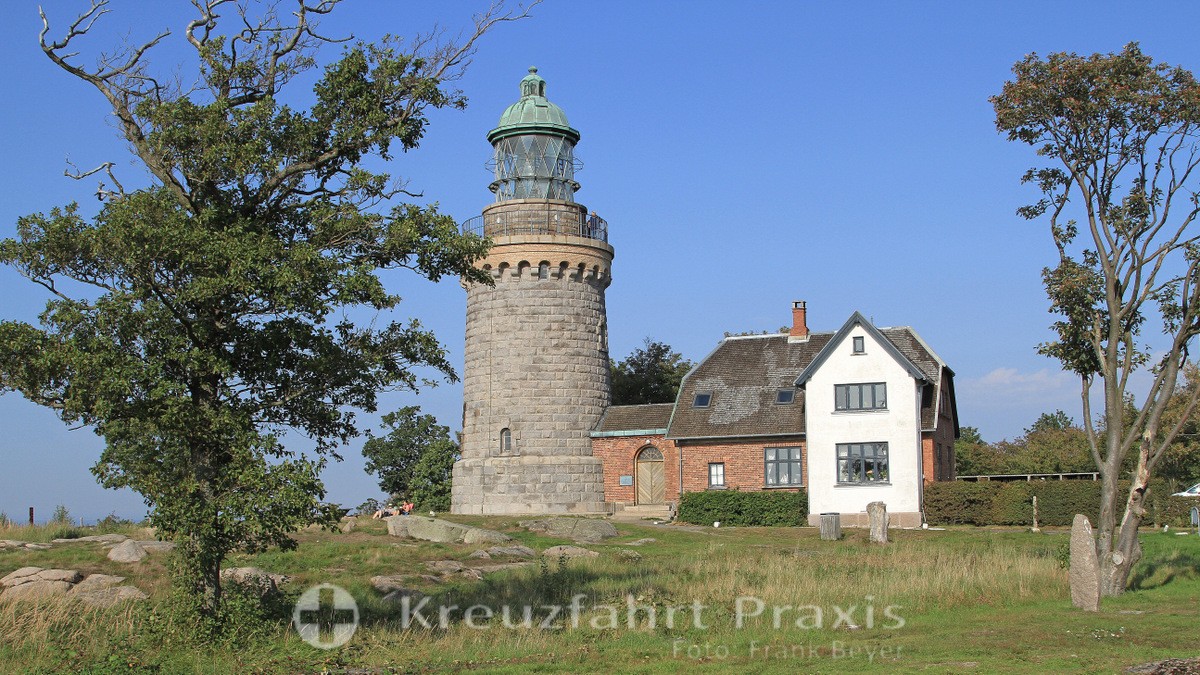 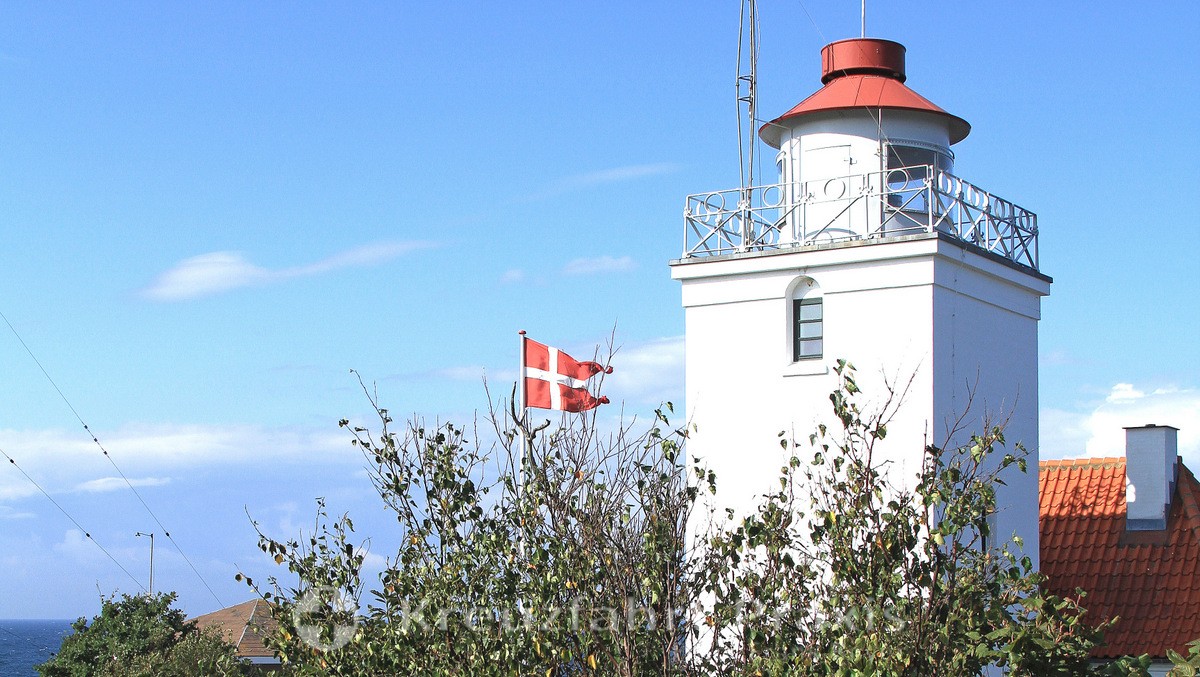 In the north-east of Bornholm, the Døndalen region stretches between the towns of Gudhjem and Tejn, a wooded valley well over 30 hectares in size. The attraction is the Døndaleå stream, which falls 22 meters in the middle of the depression. Døndalen is known nationwide as the valley with Denmark's highest waterfall. 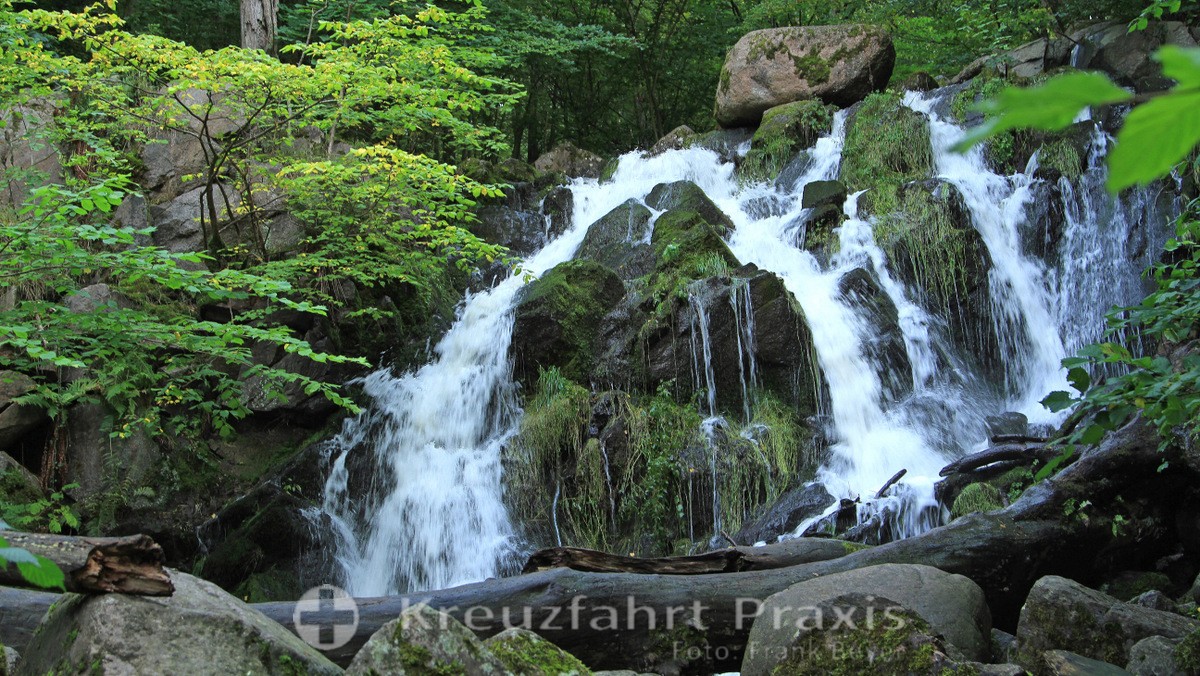 The Helligdomsklipperne tower a few hundred meters from Døndalen. In the Middle Ages, a sacred spring attracted pilgrims. In summer, tourist boats go from Gudhjem to the popular, jagged cliff landscape. 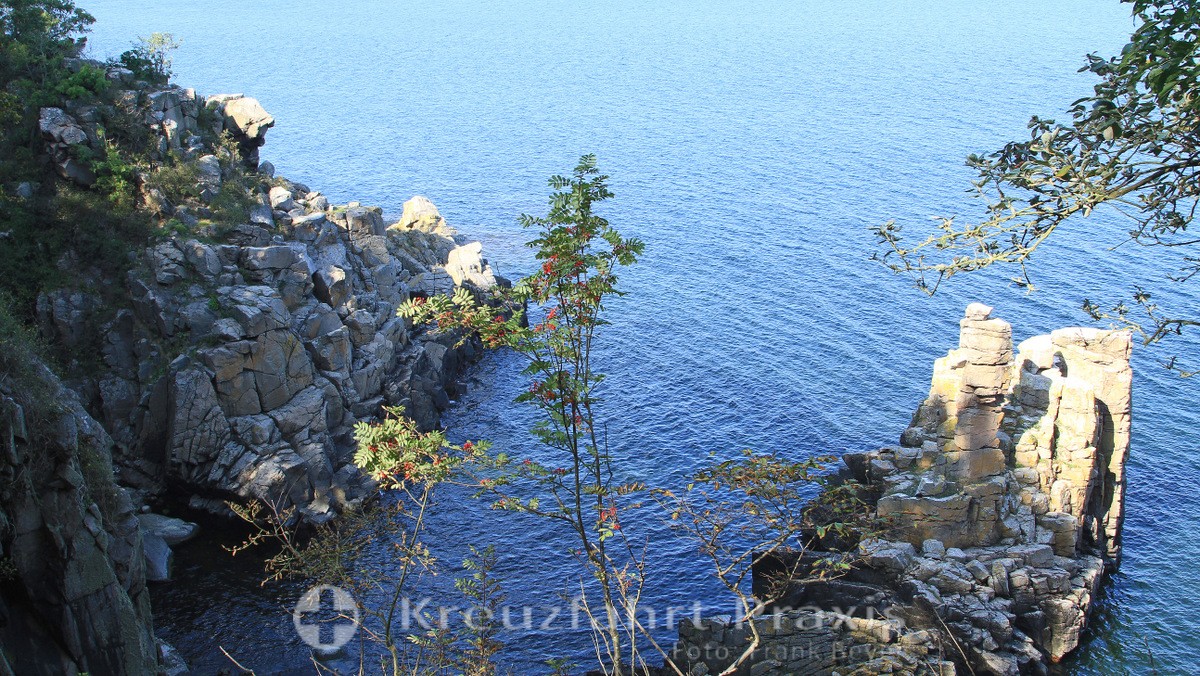 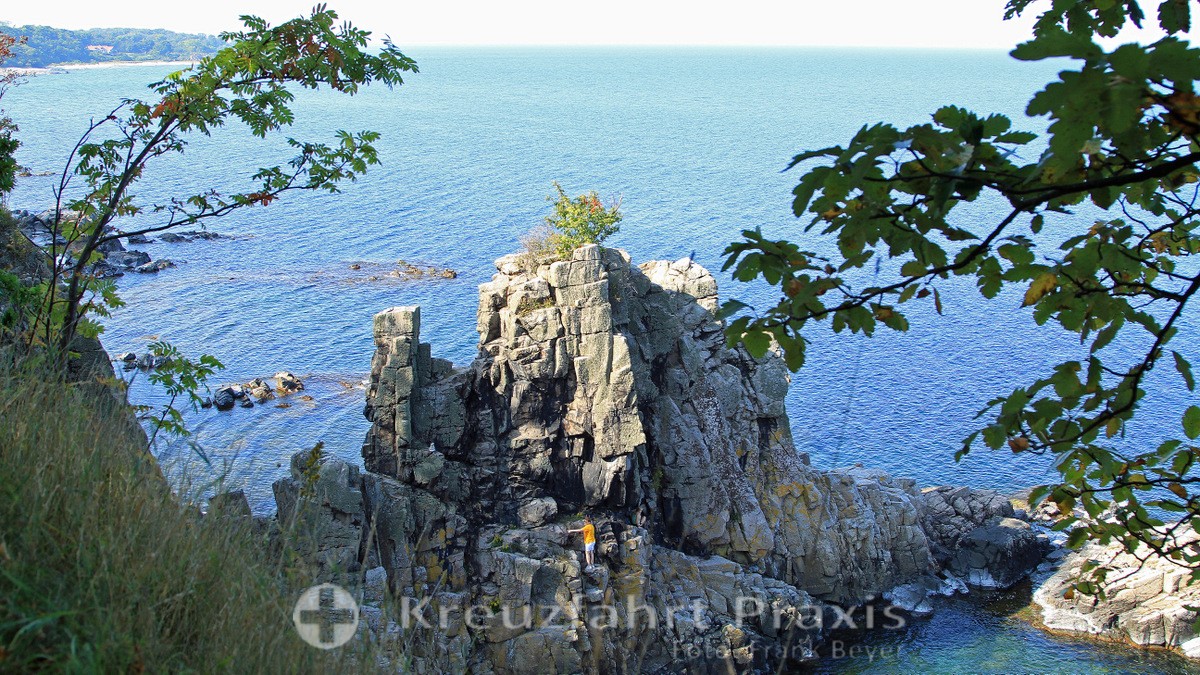 Røverborgen, the robber's castle, is a cliff formation northeast of Gudhjem. A coastal path leads past the rock formation popular with photographers. Allegedly it was already used as a film set. 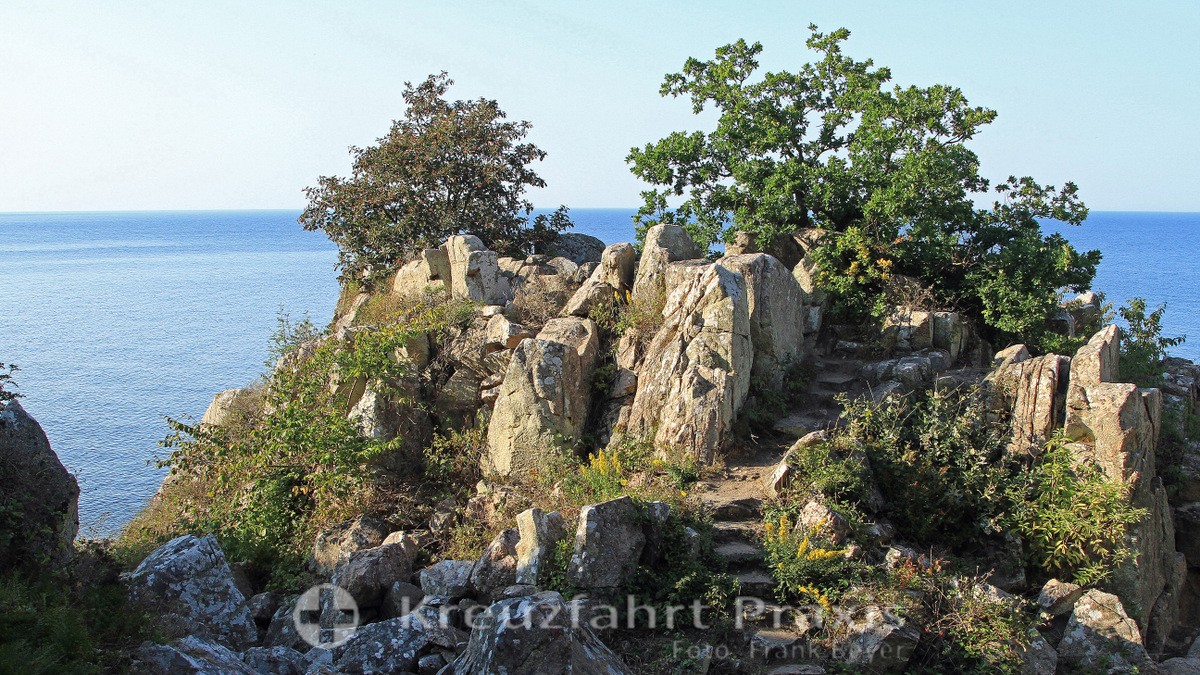 The Kultippen waste dumps are located in the north-west of Bornholm. The lunar landscape by the sea bears witness to the lignite mining of bygone times. In order to get to the coal, the layers of sand and clay above were cleared aside, filled into tipping pits and dumped as overburden on the west coast. In the south of the village of Hasle, the lunar landscape of the spoil dump bears witness to the former mining activities. Due to the high sulfur content of the soil, plants only thrive sparsely on the heap. 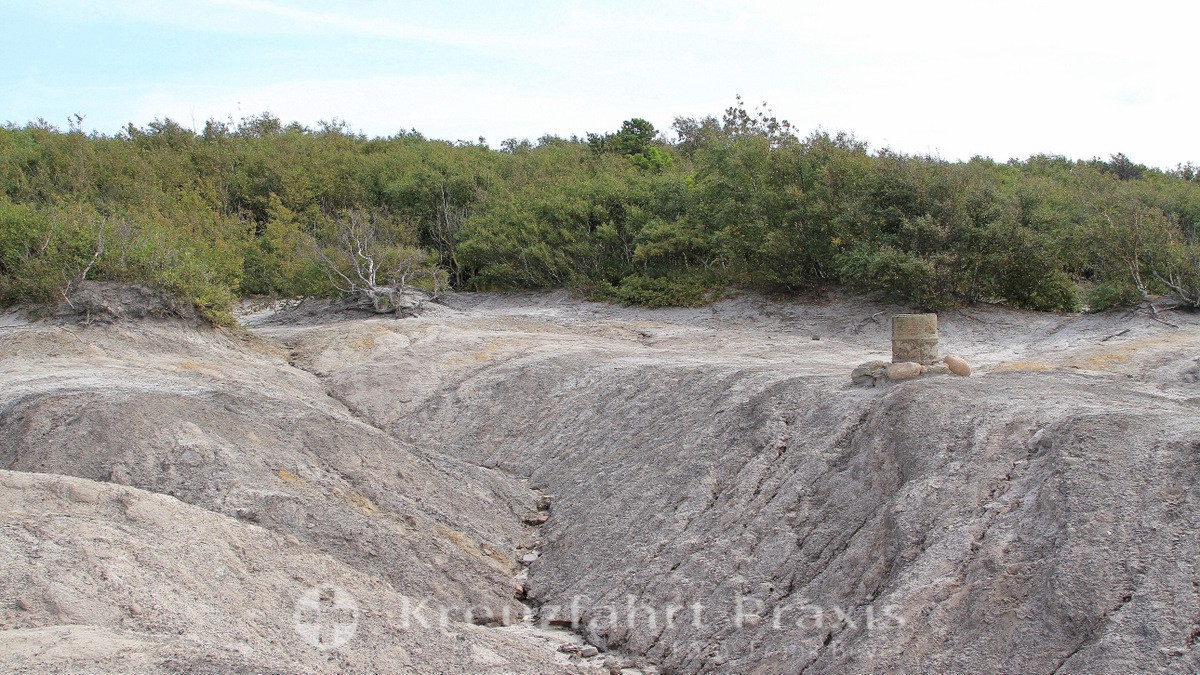 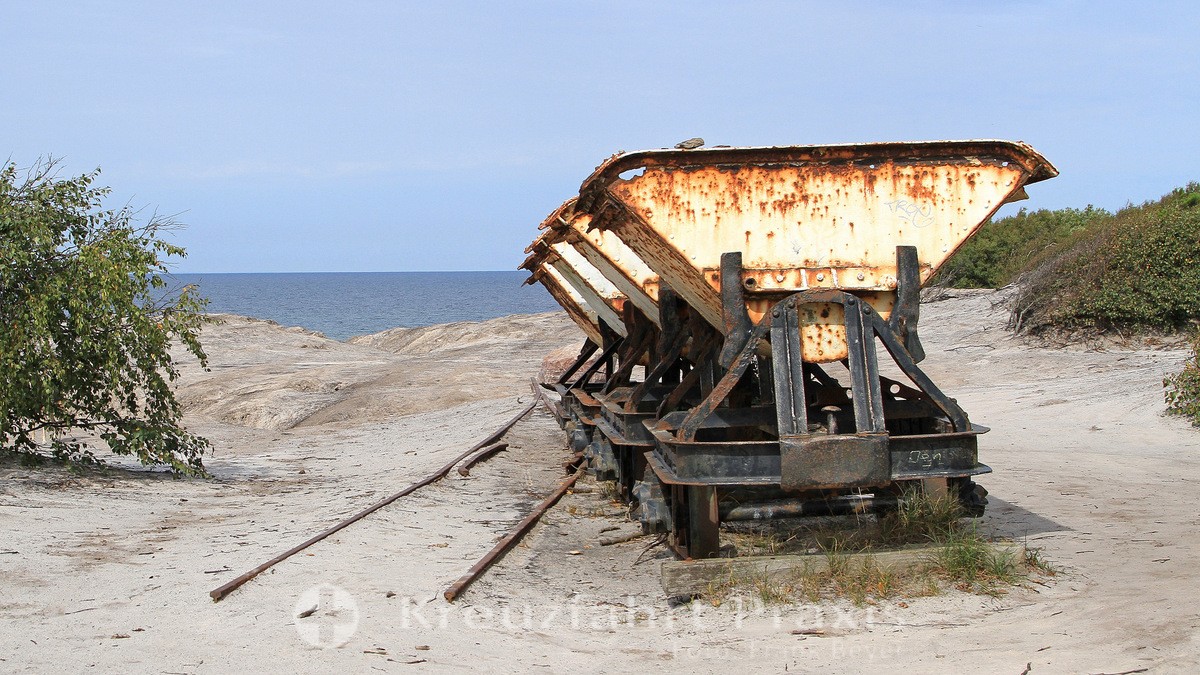 In the center of the island is Almindingen, one of the largest forest areas in Denmark. The site includes an area of ​​around 3.800 hectares. The name is derived from the German word "Allmende" and means in relation to Bornholm a generally accessible pastureland. In order to counteract the looming desertification, a forest was created on the terrain in the first half of the 19th century.

European bison imported from Poland graze on an area of ​​around 200 hectares. The animals create new habitats for plant, animal and bird species through their feed intake. The 16-kilometer-long gap valley Ekkodalen (with echo) and the highest point on Bornholm, the 162-meter-high Rytterknægten, are also located in the Almindingen Forest. 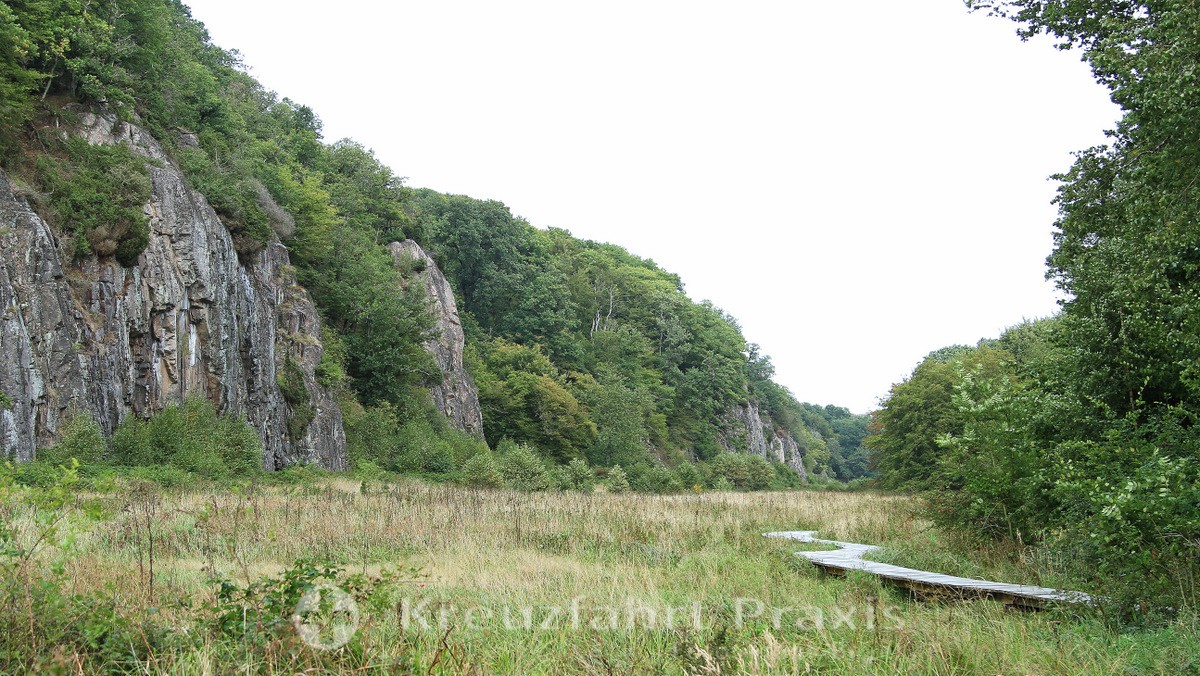 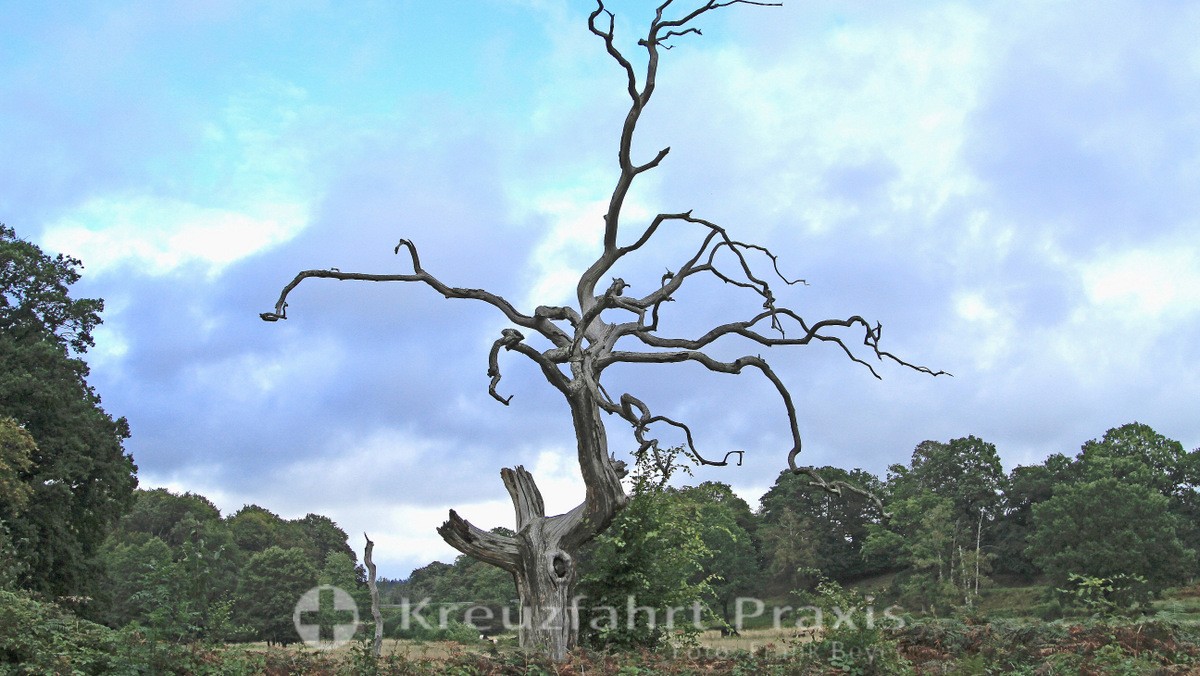 The hills of paradise

South of Svaneke, the hilly nature and forest area Paradisbakkerne, the "Paradise Hill", is a destination for nature lovers. The landscape is characterized by gorges and valleys, high moors and small forest lakes. In the spacious area, visitors will find the "Rokkesten", Bornholm's largest "rocking stone". If you press in the right place, you will feel the movement of the roughly 35-ton boulder.

Bornholm is a granite island. Only at the southeastern tip is the island between Snogebæk in the northeast and Boderne in the southwest flat and sandy. A steadily growing dune landscape has been created there, left to the forces of nature. 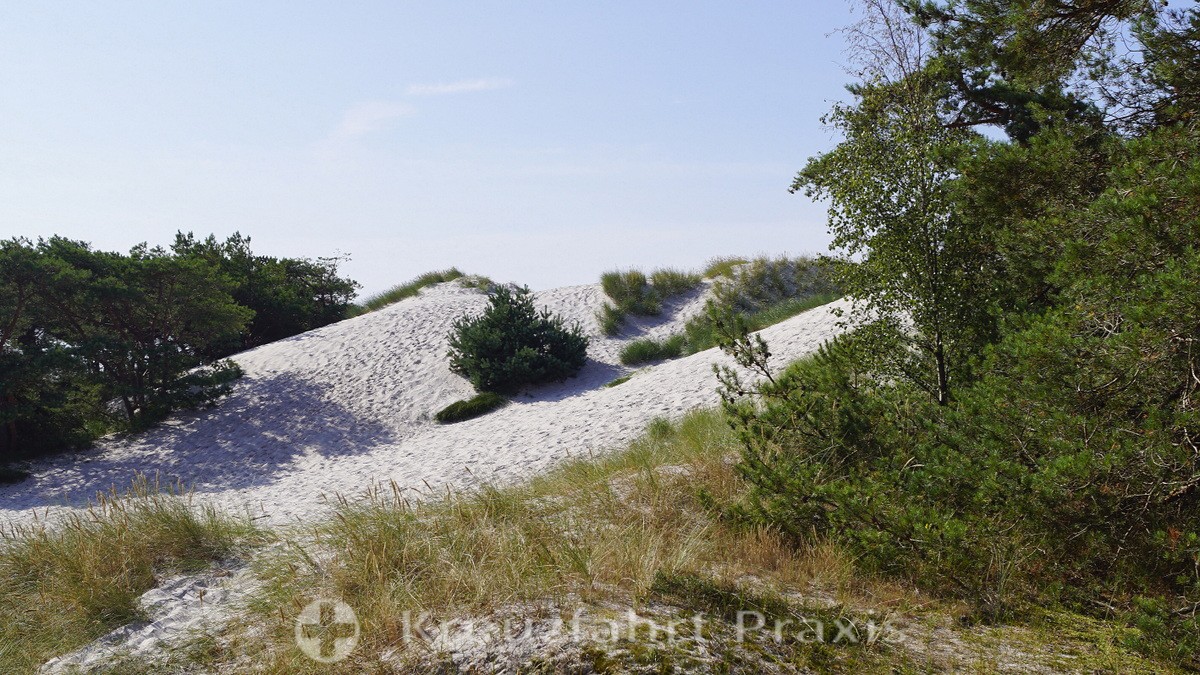 For decades, the region around Dueodde has been the preferred destination for thousands of beach lovers in the tourist season. The visitors appreciate the fine sandy beach, the large parking lot with attached kiosk and the beach restaurant. In the surrounding coniferous forests, several campsites and holiday home areas have been created. Worth seeing in the dune landscape are ...

... the Dueodde lighthouse: at 48 meters high, it is Bornholm's highest lighthouse. 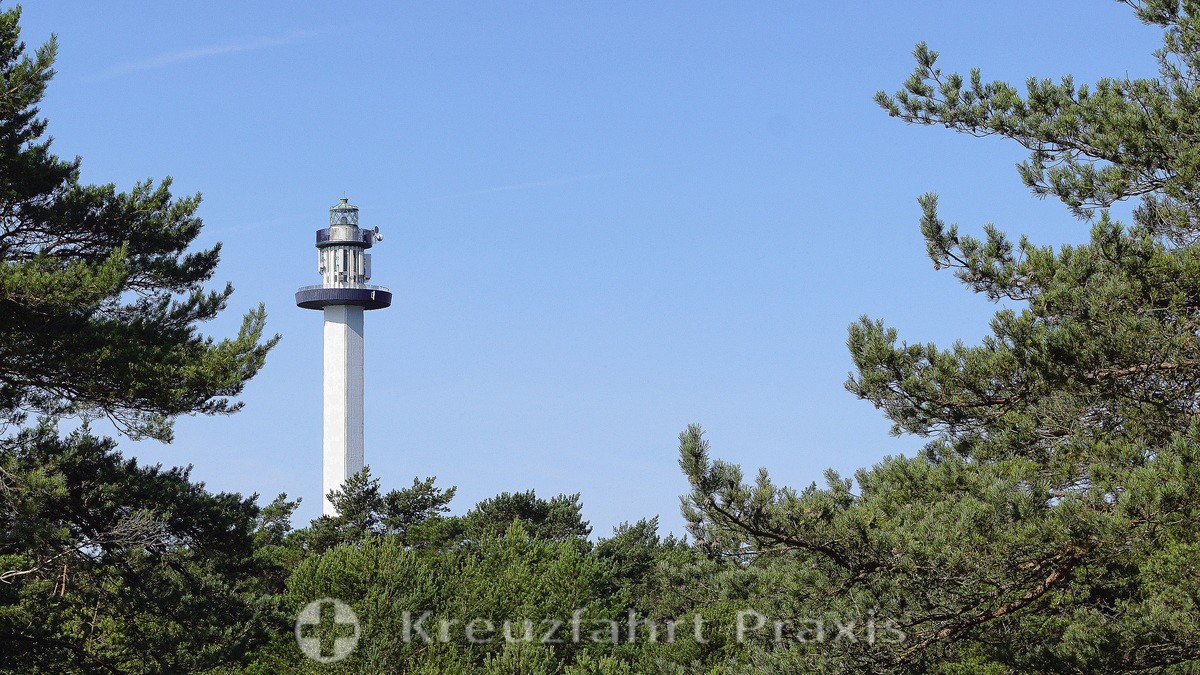 ... Bornholmertårnet, completed in 1986: The building is a relic of the "Cold War". The tower, which is more than 70 meters high, was used to eavesdrop on the states of the former Warsaw Pact. The former military restricted area surrounding the tower has been open to the public since summer 2015. An elevator transports visitors to a height of 70 meters. From there you have great views over the southeast of the island. A documentation center (Cold War Exhibition) deals with the situation on the island during the First and Second World Wars and with eavesdropping activities. In the vicinity of the tower are the concrete foundations of gun emplacements that were erected by the German Wehrmacht during World War II. 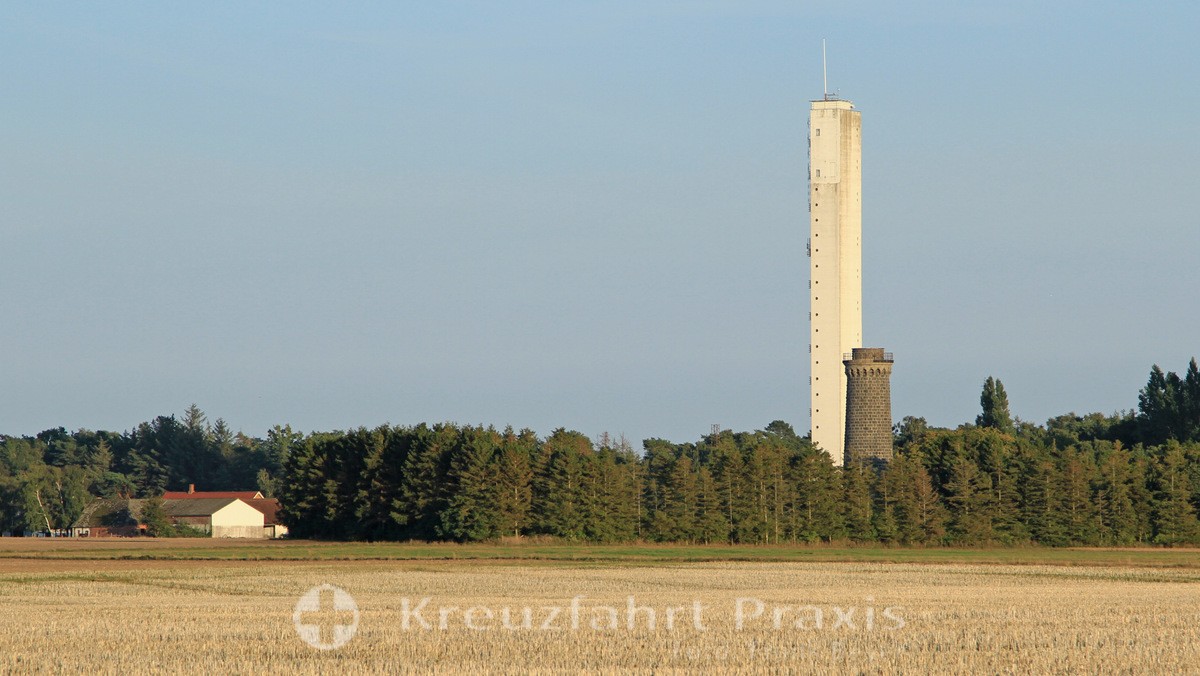 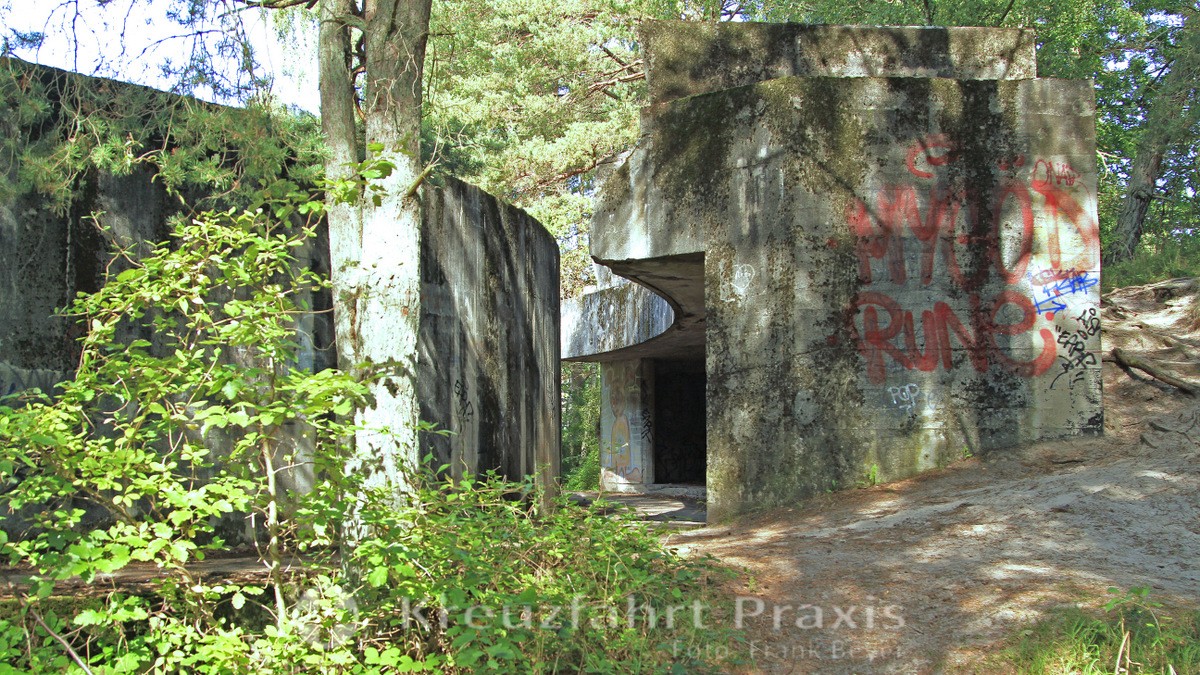 ... the Geografisk knudpunkt: In contrast to Bornholmertårnet, it is easy to miss. In the dunes near Slusegård, the geographical intersection of 55 degrees north and 15 degrees east is engraved on a granite slab. The stone marks the point at which the sun is highest and exactly in the south at 12:00 noon. In this way it is documented that Bornholm is the center of Central European Time. 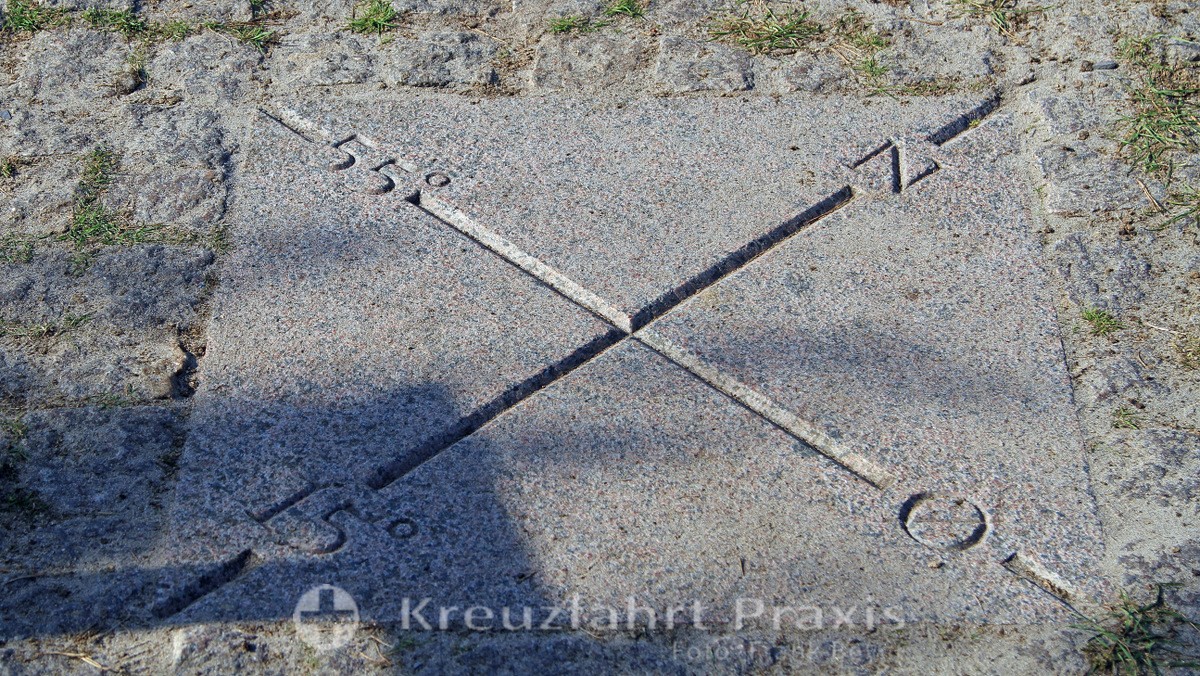 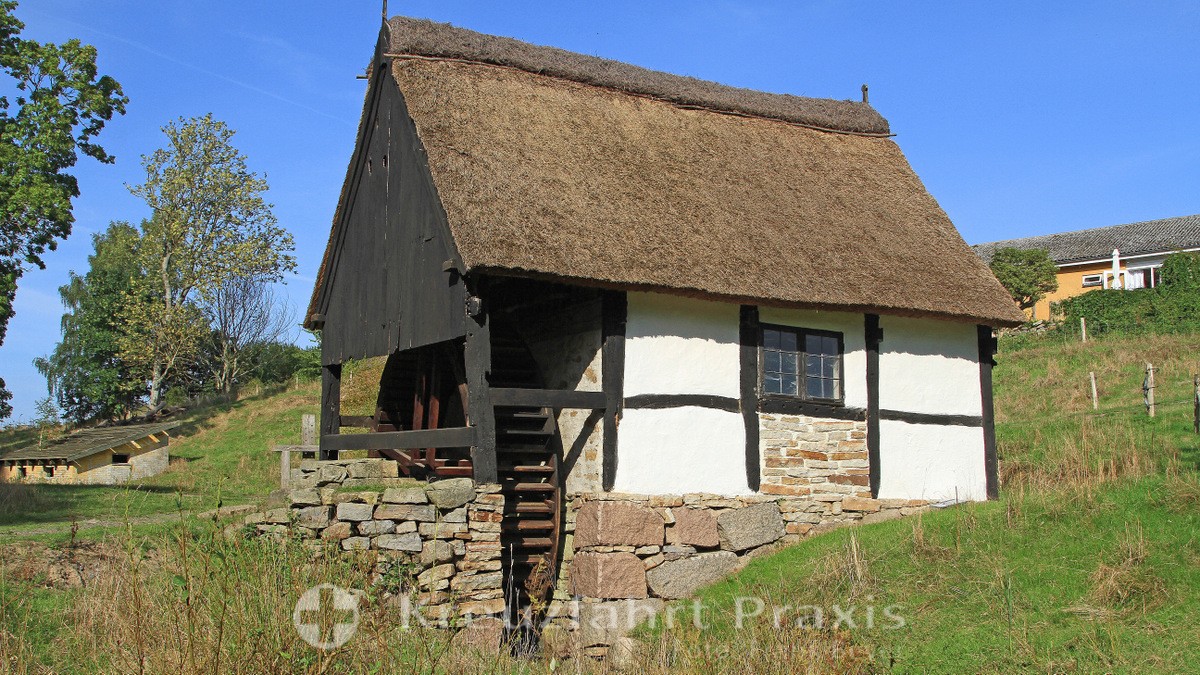 The geographic knot point is at Slusegårdens watermill. The way there is marked.

There are 20 lovely and livable towns and cities on Bornholm. More than 1.000 people live in just five municipalities. The villages are correspondingly small. Anyone who visits the island regularly comes to the conclusion that time has stood still in Bornholm's towns. It is difficult to make a choice between the places, as each congregation is special in its own way. Our favorite places are:

The former fishing villages of Sandvig and Allinge are located in the northeast of Bornholm. The connected places are very different. The northern Sandvig is due to its proximity to the Hammeren a destination for nature lovers. Rock carvings from the Bronze Age can be found between Sandvig and Allinge. Five kilometers south of Allinge, one of the four round churches on the island, the three-story Sankt-Ols-Kirche, stands on a hill in Olsker. 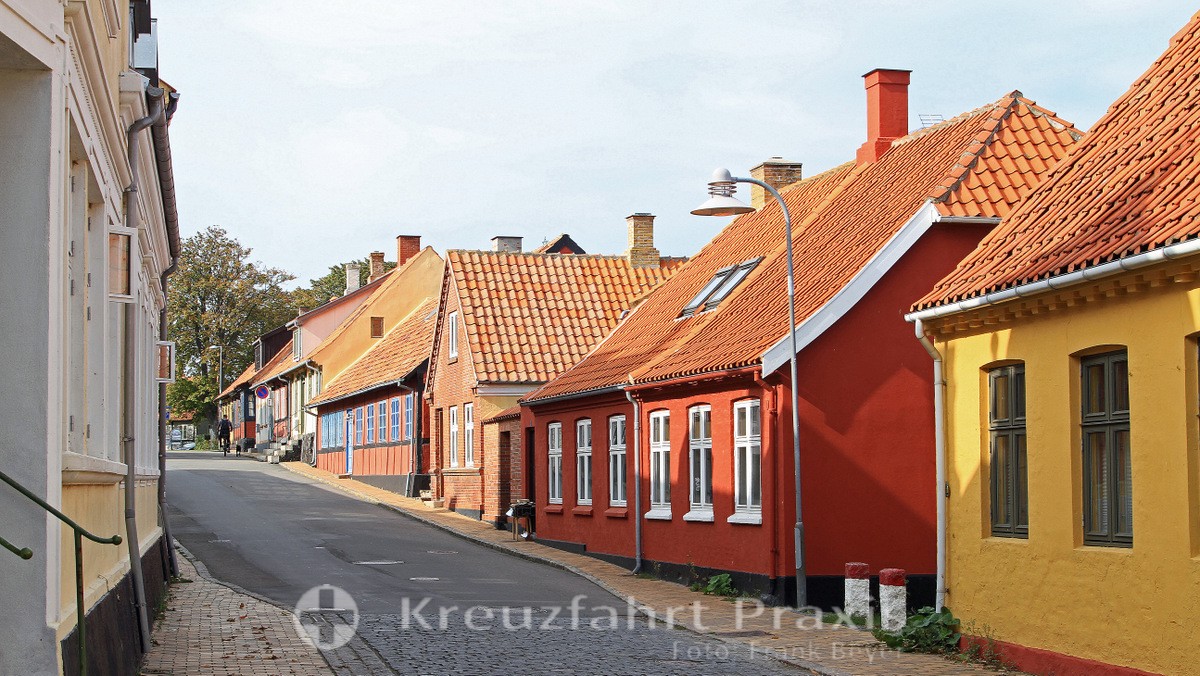 The tranquil-looking Allinge is a harbor town with a lively music scene, restaurants and shops. Every year in June, the Folkemødet political festival takes place in Allinge. The focus of the event, which takes place in the open air, is discussions, concerts and cultural offers.

The place and the port face east. From the port, streets wind their way up the mountain between stone walls. Svaneke's climate is extremely mild; fig and mulberry trees bear fruit in the village. Shops and bars are grouped around the market square. There is even a candy factory that is known far beyond Denmark's borders. The Lutheran Church of Svaneke is also worth seeing. The red painted church rises on the edge of the village on a hill.

The harbor, which was well used by fishing and sailing boats, was blown into the rock. Next to the harbor basin, fragments of the barque Svanen are reminiscent of the 180-foot longest sailing ship ever built on Bornholm. 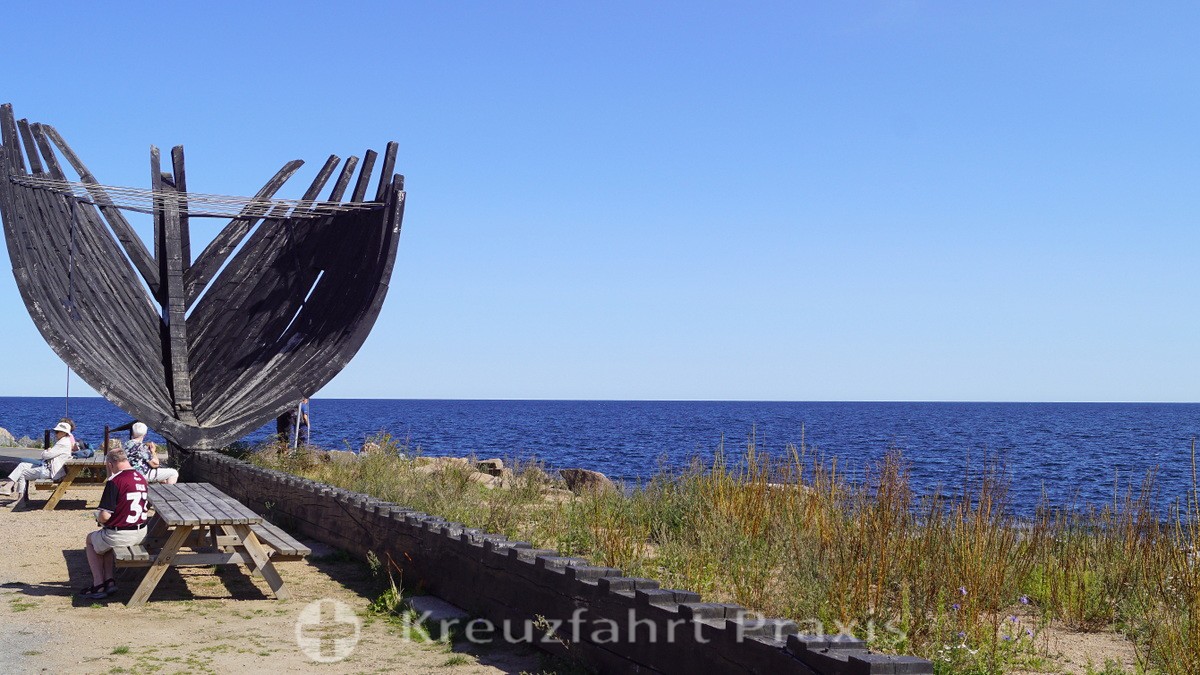 The village with 700 inhabitants lived for centuries from agriculture and fishing. If you want to experience a traditional fishing village, visit Snogebæk. In modern times, the small port, which can be reached via a wooden walkway, is used by fishermen and recreational captains. There are extensive holiday home areas around Snogebæk. 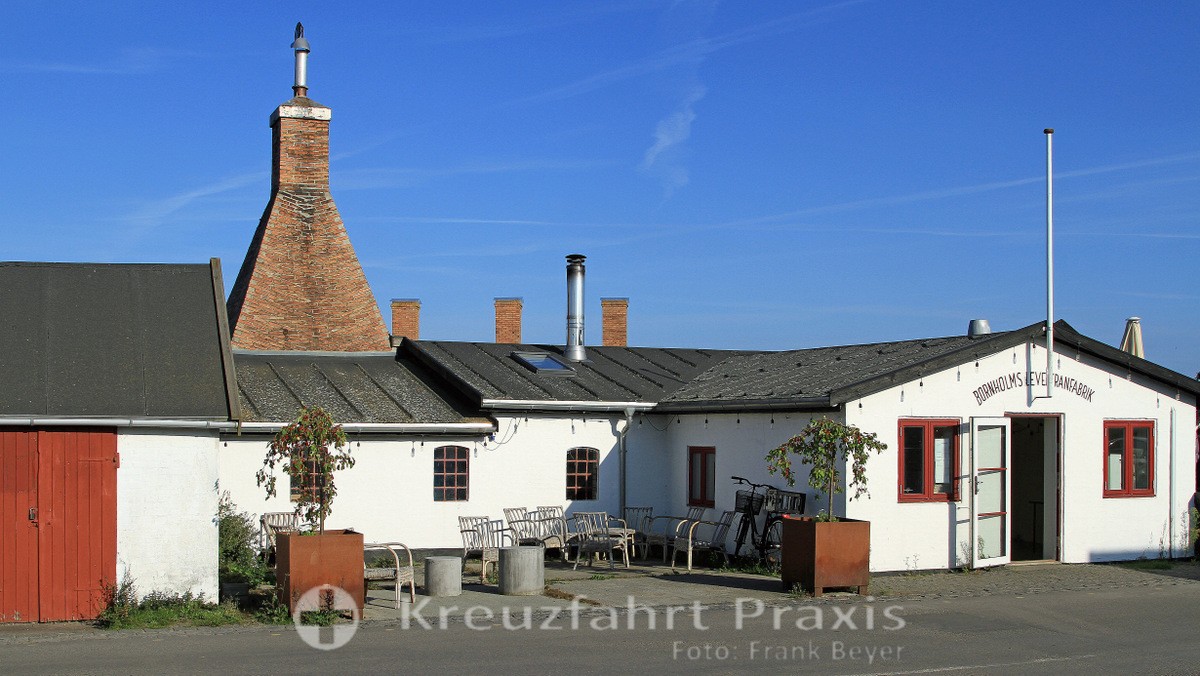 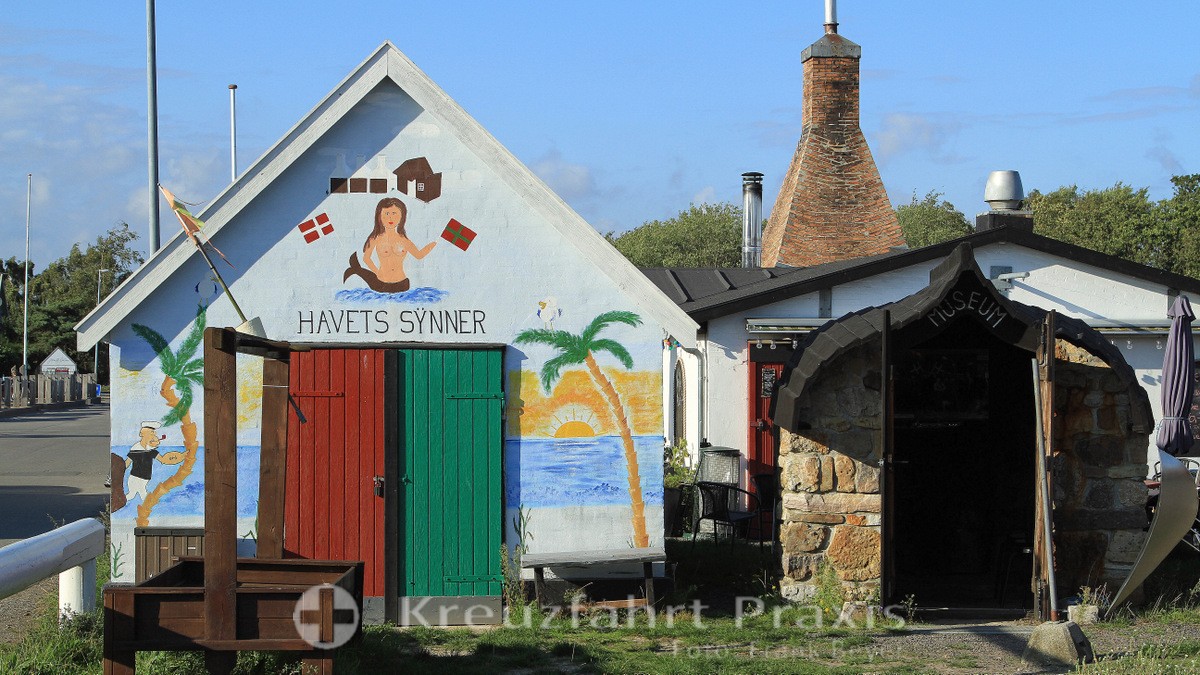 Rønne is many things rolled into one. A third of the approximately 40.000 islanders live in the small town. Rønne is the administrative and commercial center of the island. Ferry and cruise ships dock in the city's harbor, and Bornholms Lufthavn, the only airport on the island, is to the east of Rønne. In short: Rønne is the fulcrum of the island. At the time of the Hanseatic League, Rønne was a port for merchant ships, and German merchants dominated the trade on Bornholm. 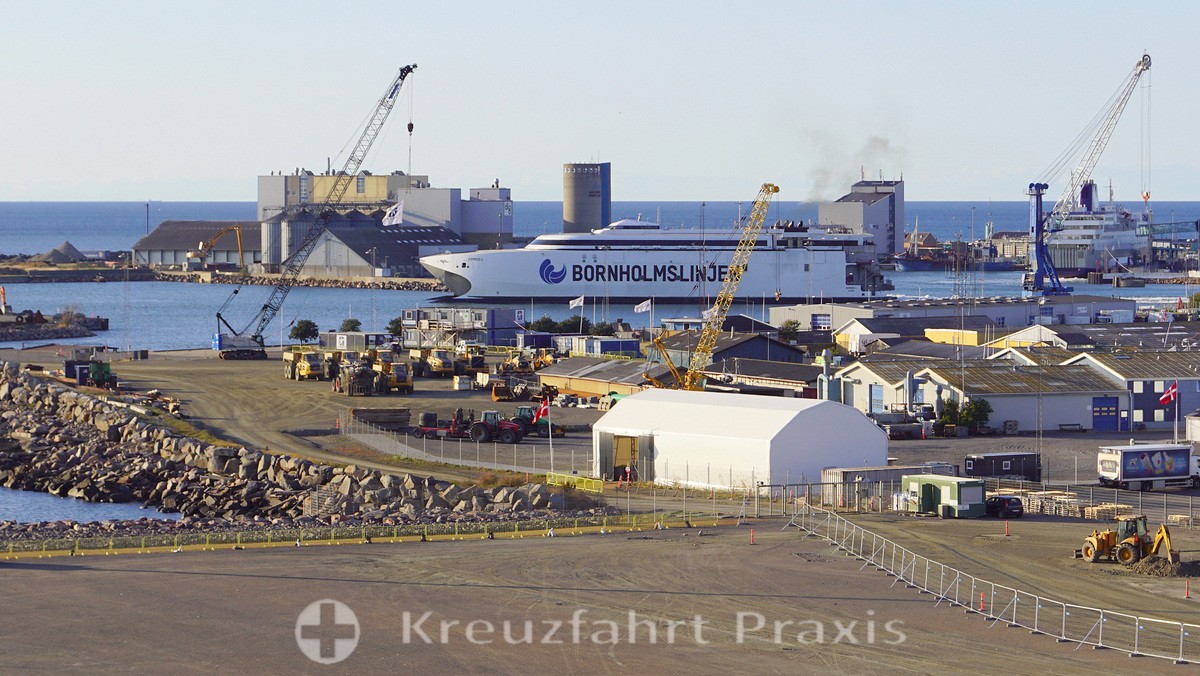 Bornholm - ferry in the harbor

Spectacular attractions like from Copenhagen or Aarhus used to, we miss in Rønne. It's the little things that arouse curiosity. Gamla Stan, the old town, is worth seeing. Rønne's guests love the historic cityscape with its omnipresent cobblestones and colorful half-timbered houses. Walls enclose green gardens with butterfly lilacs and fruit trees. Where else is honey from own production sold in an old town? The residents display china, glass and knick-knacks in the windows of their houses. Attractive, small shops and no less than 50 ceramic shops await those who are keen to buy. 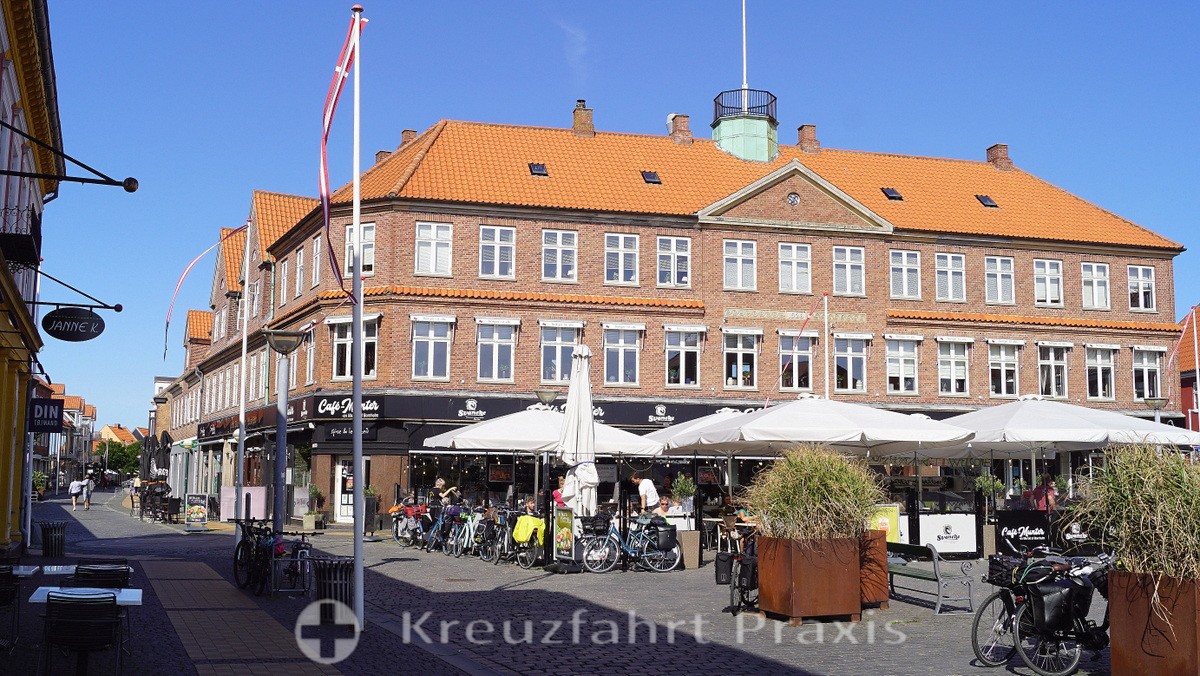 Store Torv, the market square, is also worth mentioning. The former parade ground for the military is surrounded by quaint cafés, restaurants and shops. Under Bornholm - Our shore excursion we introduce Dueodde, Svaneke and Rønne in words and pictures.