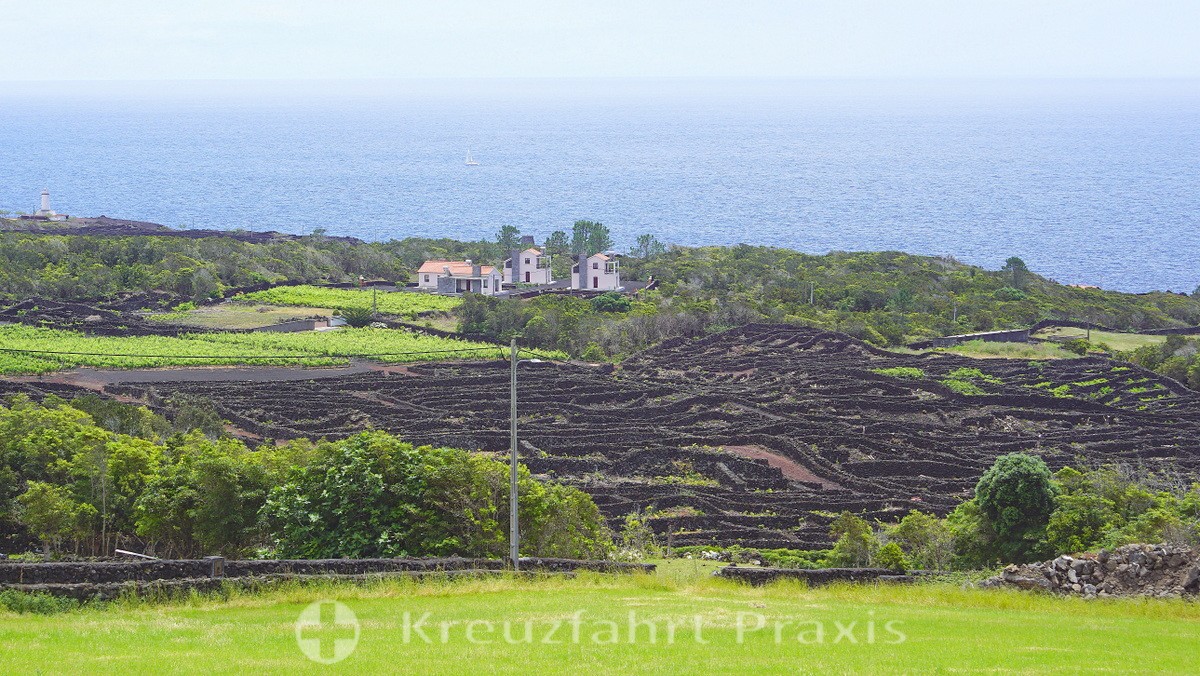 The group of nine inhabited Azores islands lies between Europe and North America in the North Atlantic. The islands extend between 37 and 40 degrees north latitude. Corvo, the westernmost and Santa Maria, the easternmost island are 600 kilometers apart as the crow flies. The flight time from Frankfurt to the Azores is four and a half to five hours. 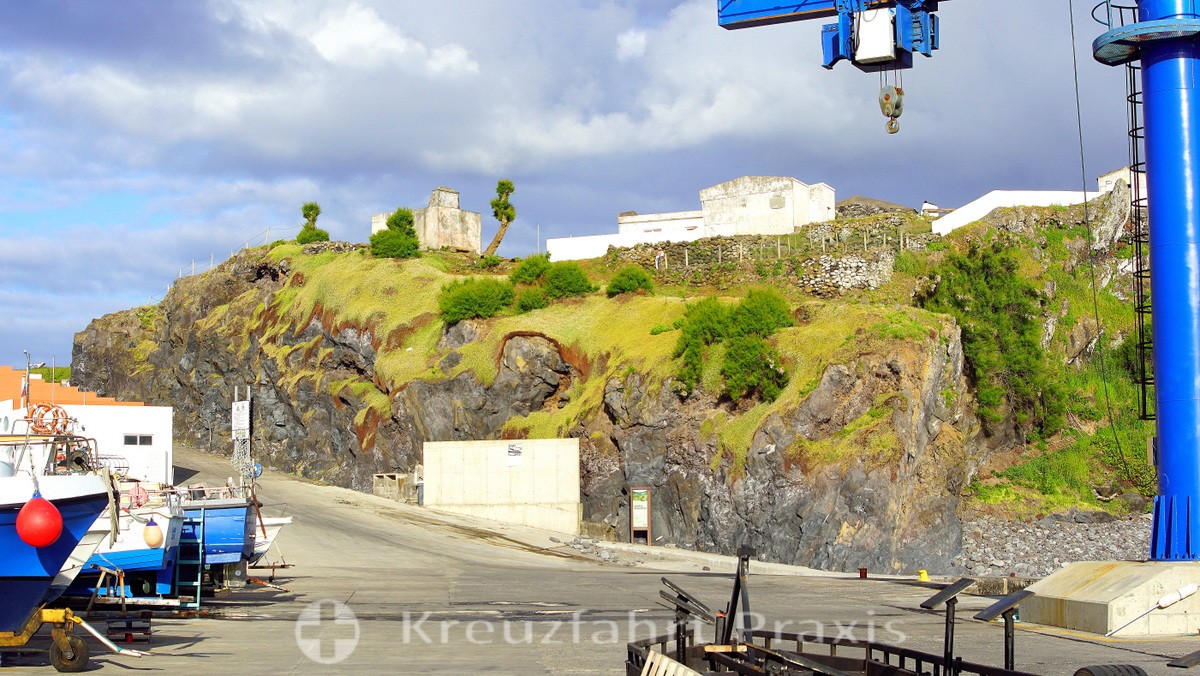 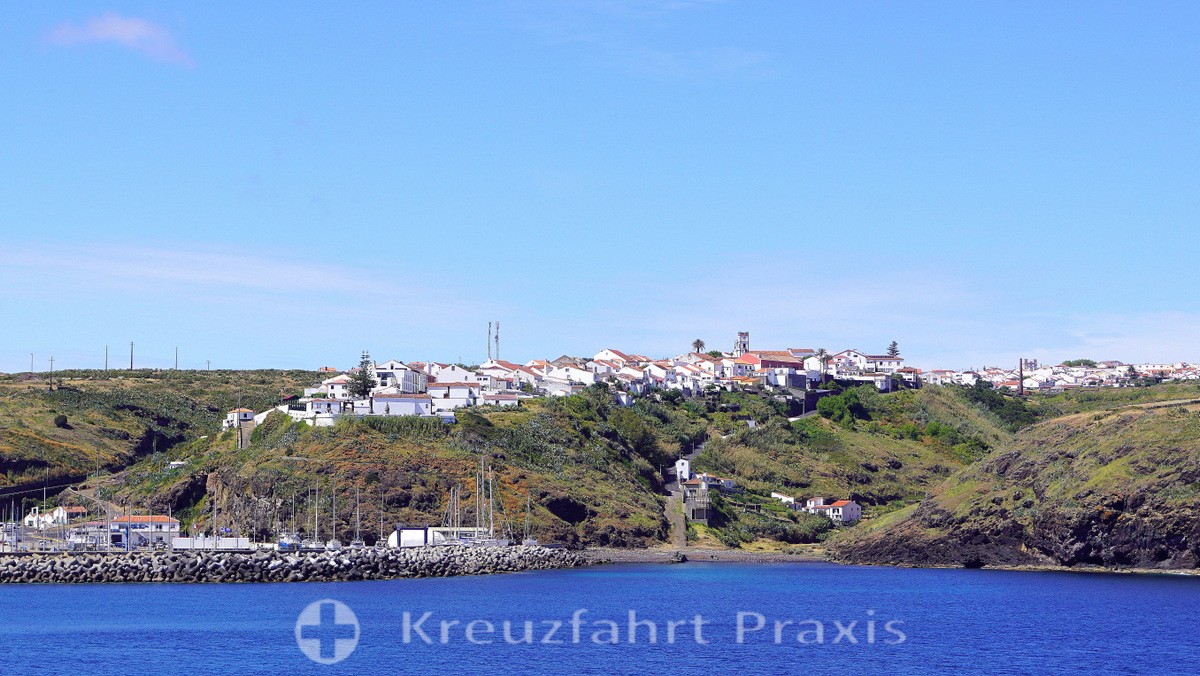 Each of the islands is very different from its neighboring islands. However, one thing is common to all of them: the unique and breathtaking volcanic landscape. The islands are natural paradises with blue lakes, green meadows along the calderas, laurel and cedar forests and often breathtaking views from the edges of the volcanoes. And every island has something else: lush hydrangea hedges. The islands offer hot springs, natural swimming pools and waterfalls. 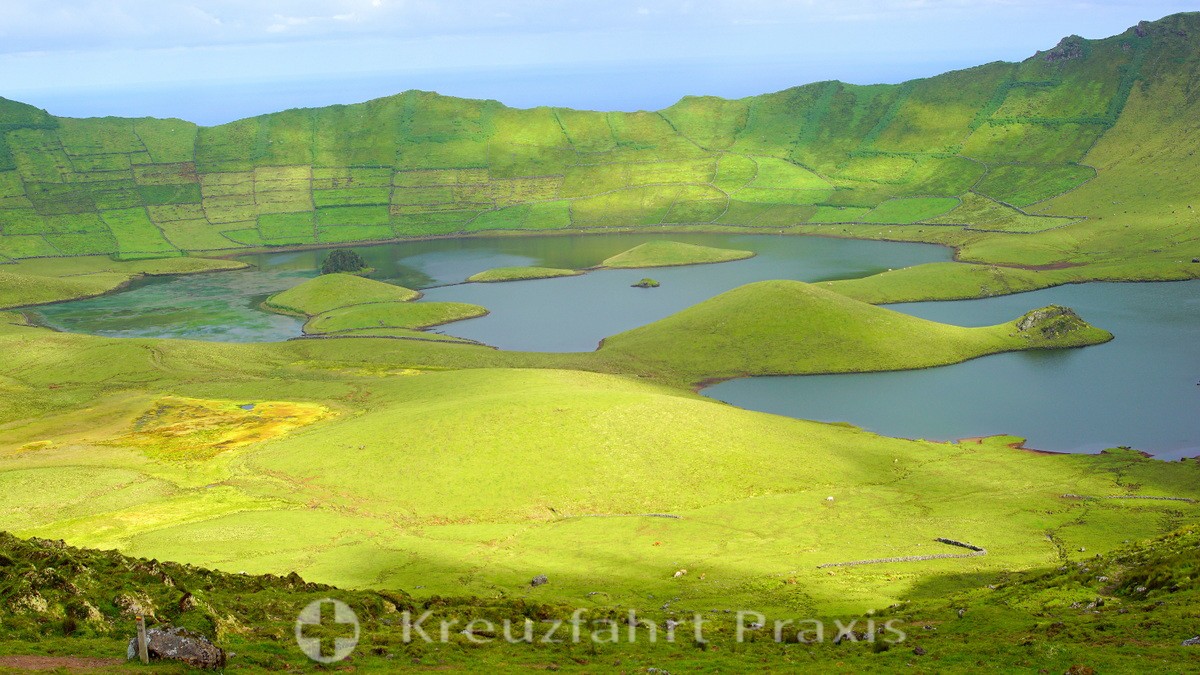 Overview of the Azores islands

The Azores Islands are of volcanic origin. They jut out of the Atlantic as the tips of huge underwater volcanoes. The islands were formed at the intersection of the European, American and African tectonic plates. The last volcanic eruption took place on the island of Faial in 1957, when the Capelinhos volcano was formed. The last earthquake with serious personal injury and property damage was recorded on Faial in 1998. 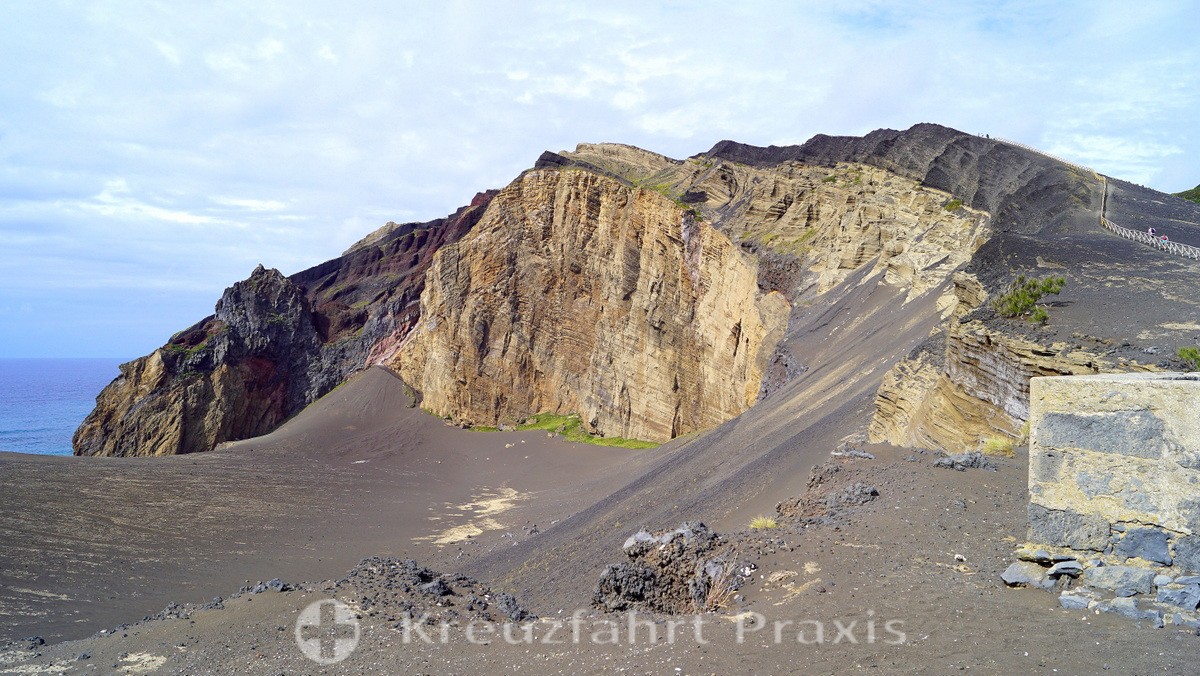 Geologists divided the islands into three groups. There are …

We will be presenting eight of the nine island destinations above in words and pictures in the coming weeks.

The islands have an oceanic-subtropical climate. The weather is relatively constant throughout the year. The temperatures are usually between 18 and 21 degrees Celsius. The weather is fickle; Sun and rain often alternate. The influence of the Gulf Stream gives the islands ideal conditions for all plants to thrive. 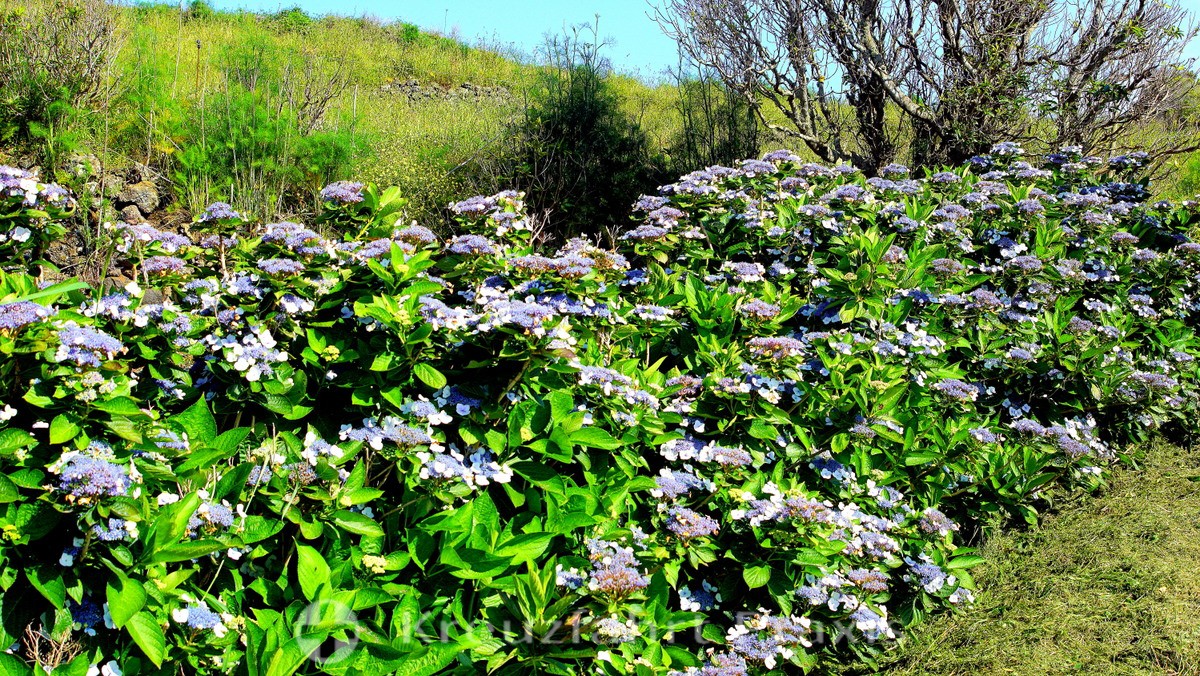 Hydrangea bushes of all sizes 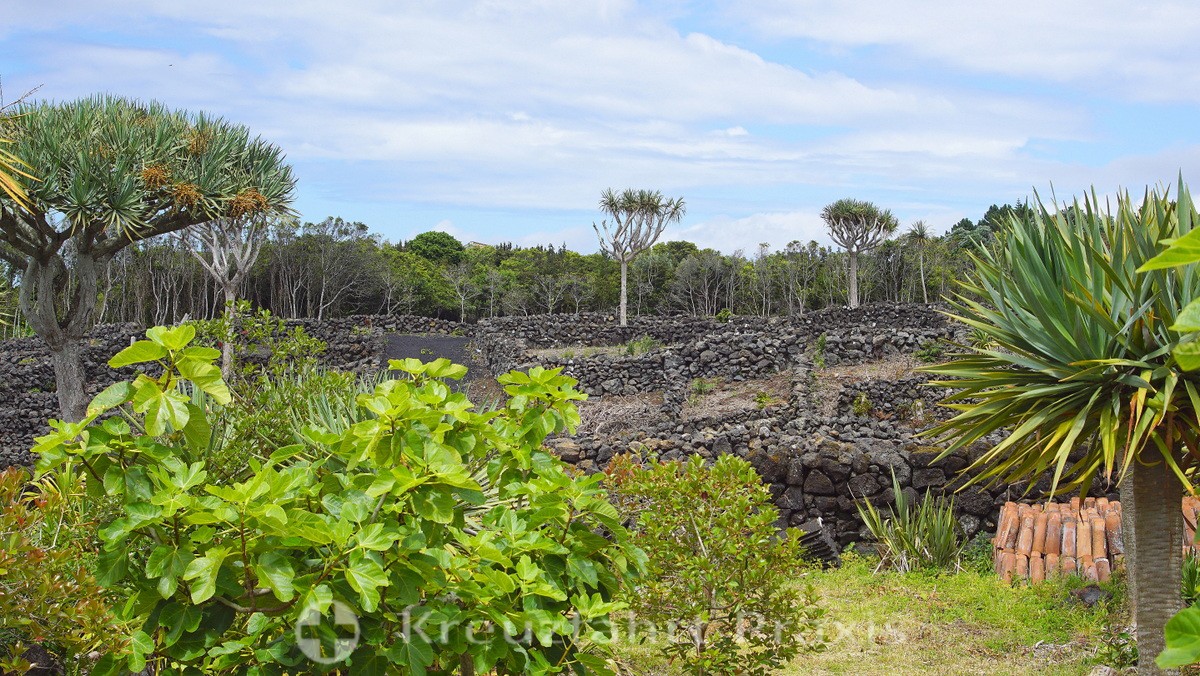 Pico - dragon trees in the Museo do Vinho

The group of the Azores consists of nine inhabited islands and eight uninhabited rocky islands, the Formigas northeast of Santa Maria.

When the Azores Islands were discovered cannot be determined. Sea charts from the 13th century already show the islands. Their location and outlines are not shown correctly, but it is assumed that these islands are the Azores. It was not until 1427 that the Portuguese navigator Diogo de Silves, coming from Madeira, discovered the eastern Azores island of Santa Maria.

Statue of Vasco da Gama in Angra do Heroísmo

Portuguese and Flemish settled on Santa Maria and São Miguel from 1439. Explorers who sailed towards the New World or came from there used the islands for food and water intake. Sugar cane was grown on the islands for a long time. Landowners achieved considerable prosperity with it. In the 19th century, farmers started growing oranges, pineapples, tea and tobacco. Whaling has also been intensified. Many residents of the islands hired on American whaling ships. 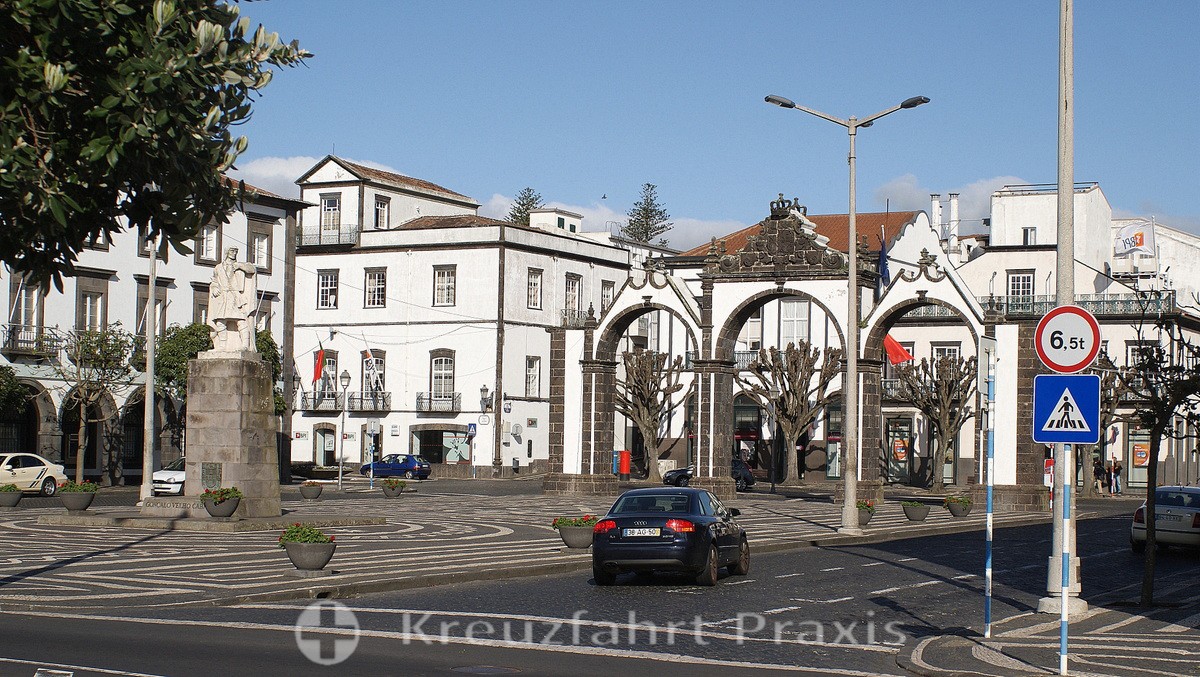 With the advent of steam shipping, the Azores were used as a bunker station for coal. The first submarine cable connecting Europe with America ran across the island of Faial. Seaplanes used the city of Horta on the island of Faial as a stopover for transatlantic flights. 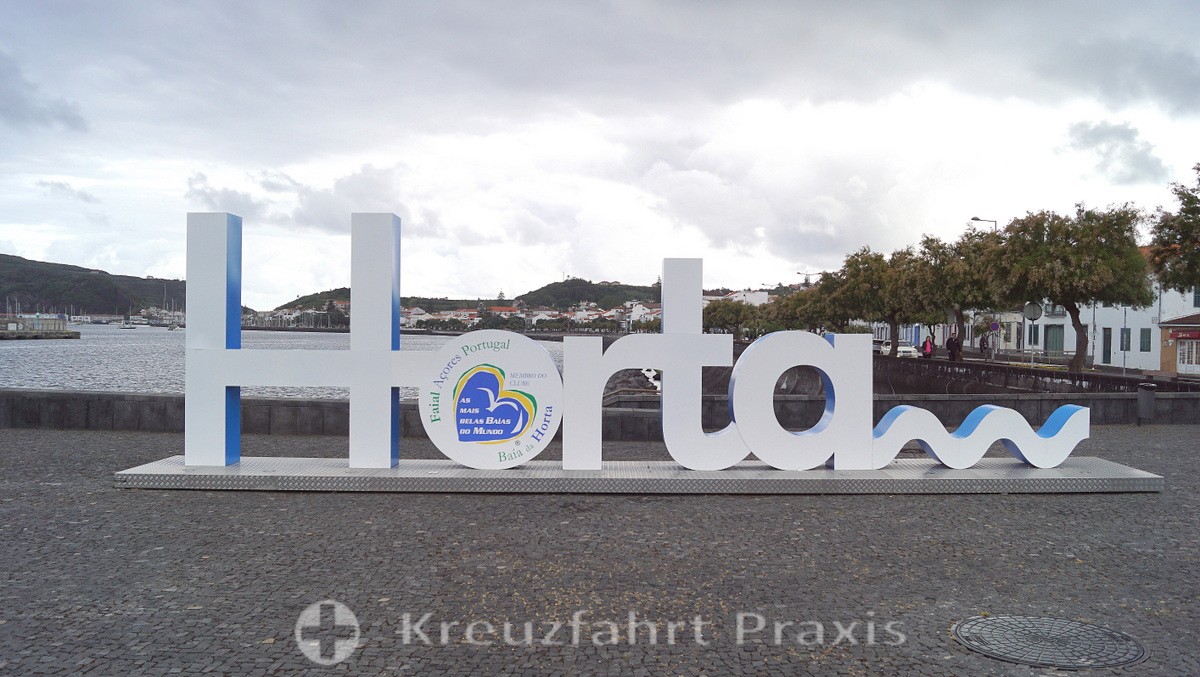 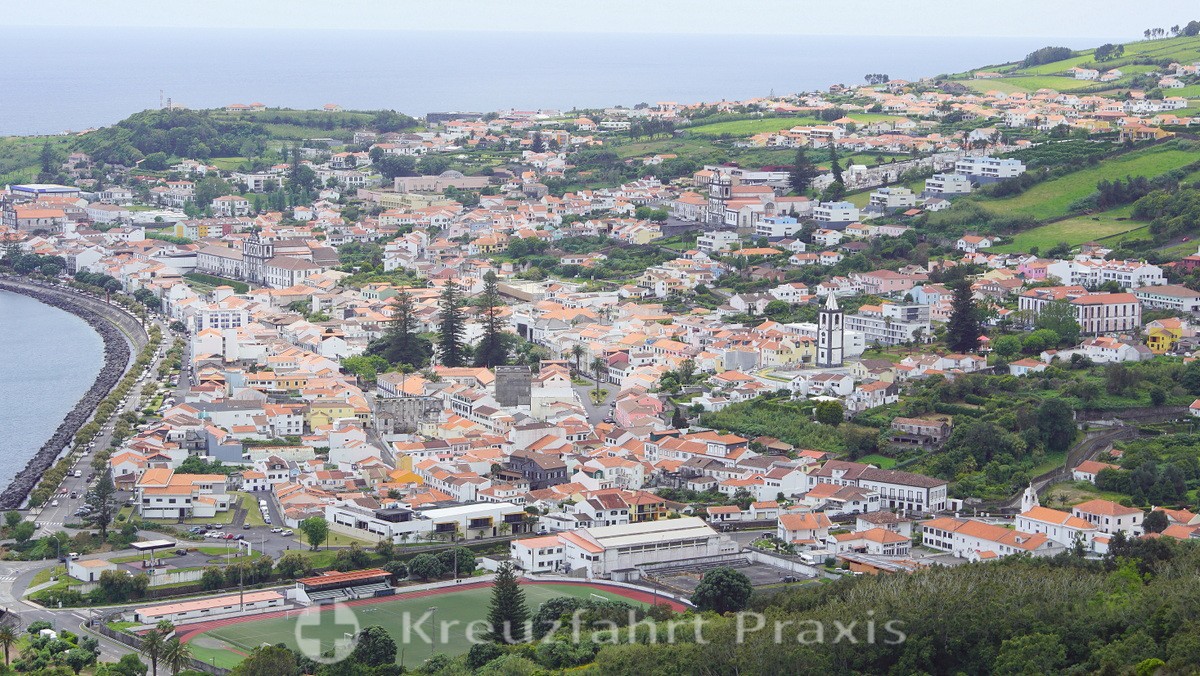 The Azores have been owned by Portugal since their discovery. The only exception is the period of personal union with Spain. Since 1976, the Azores have enjoyed the status of a Região Autónoma, an autonomous region, alongside Madeira. Its president and the regional government sit in Ponta Delgada on São Miguel; the regional parliament meets in Horta on Faial. The representative of the Portuguese central government resides in Angra do Heroísmo on Terceira. 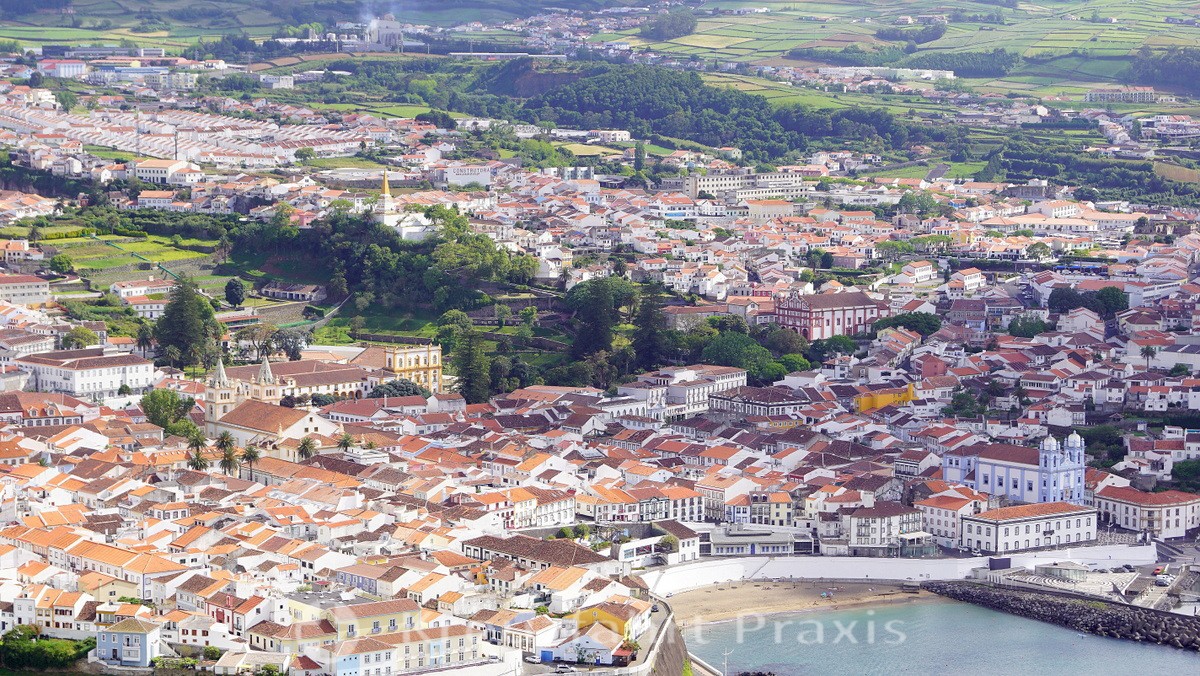 Terceira - Angra do Heroísmo from a bird's eye view

The towns of the Azores appear orderly and proper. However, that does not change the fact that the islands are among the economically weak regions in Europe. Funding from the EU compensates for the location disadvantage. Important branches of the economy on all islands are livestock and dairy farming, fishing, the cultivation of pineapples and, increasingly, wine. And then there is tourism. Although the Azores are a niche destination, tourism is on the up. 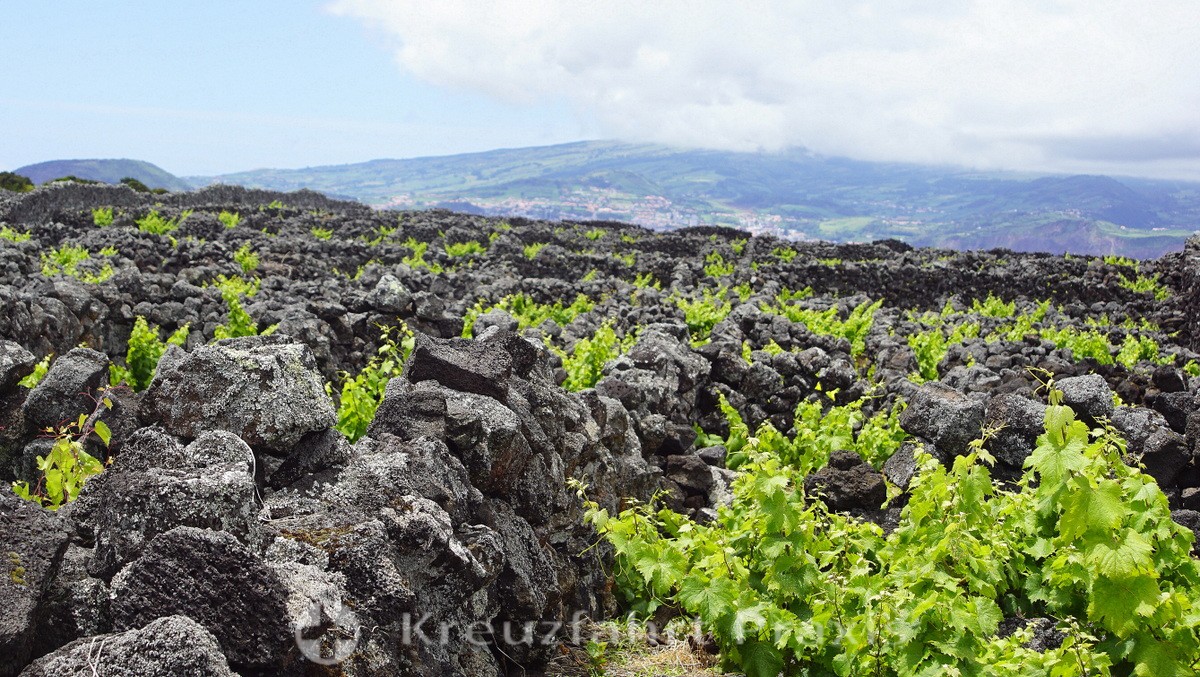 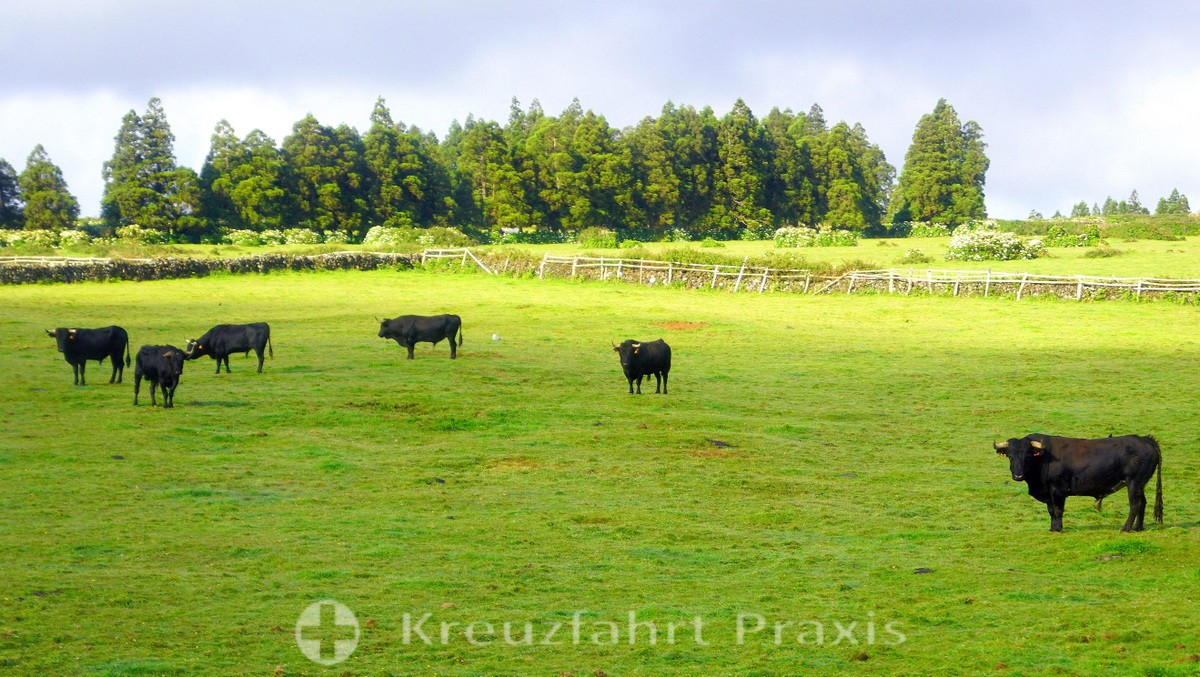 Cattle in species-appropriate husbandry on Pico

The islands are an ideal holiday destination for nature lovers, fans of adventure sports and those looking for sustainable tourism. Whale and dolphin watching are offered as tourist activities. So far, 38 species of whales and dolphins have been spotted off the Azores Islands. The most popular water sports include diving, surfing and sailing. Hikers get their money's worth as well as cyclists and riders. Paragliding is one of the exotic sports. The crater rims on São Miguel are recommended for this. 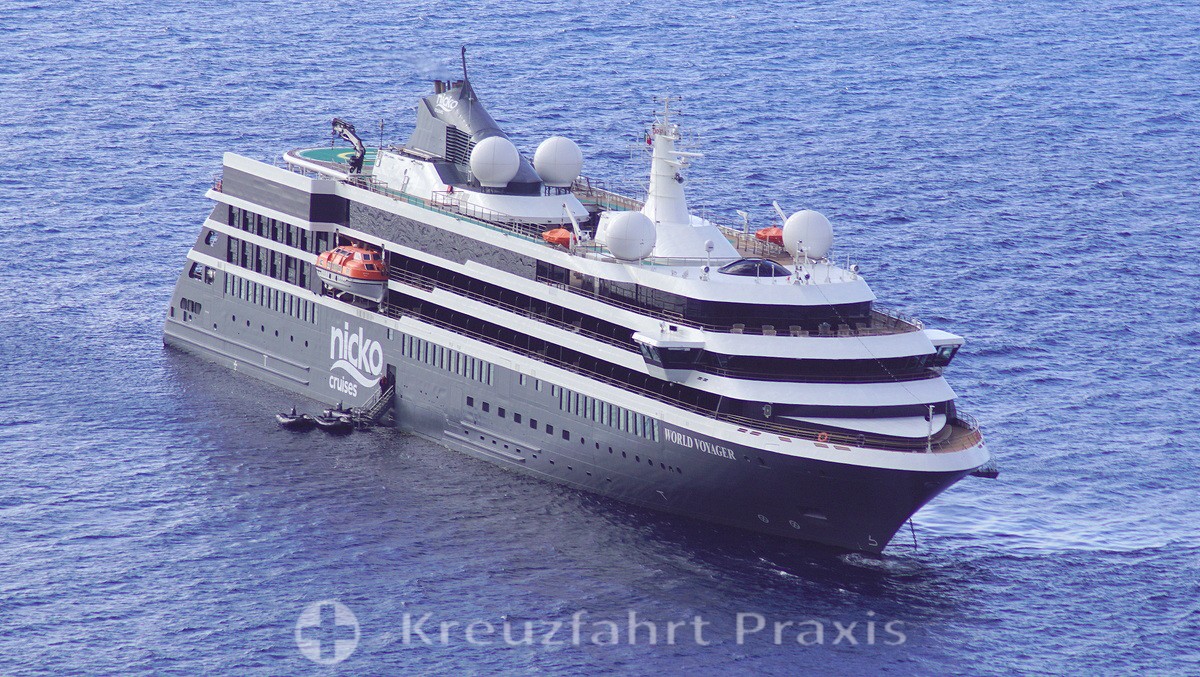 WORLD VOYAGER in the roadstead in front of Corvo

From time to time the islands are destinations for cruise ships. Ponta Delgada on São Miguel is often visited as part of transatlantic crossings. Smaller cruise and expedition ships like the WORLD VOYAGER from nicko cruises, carry out trips to the individual islands.