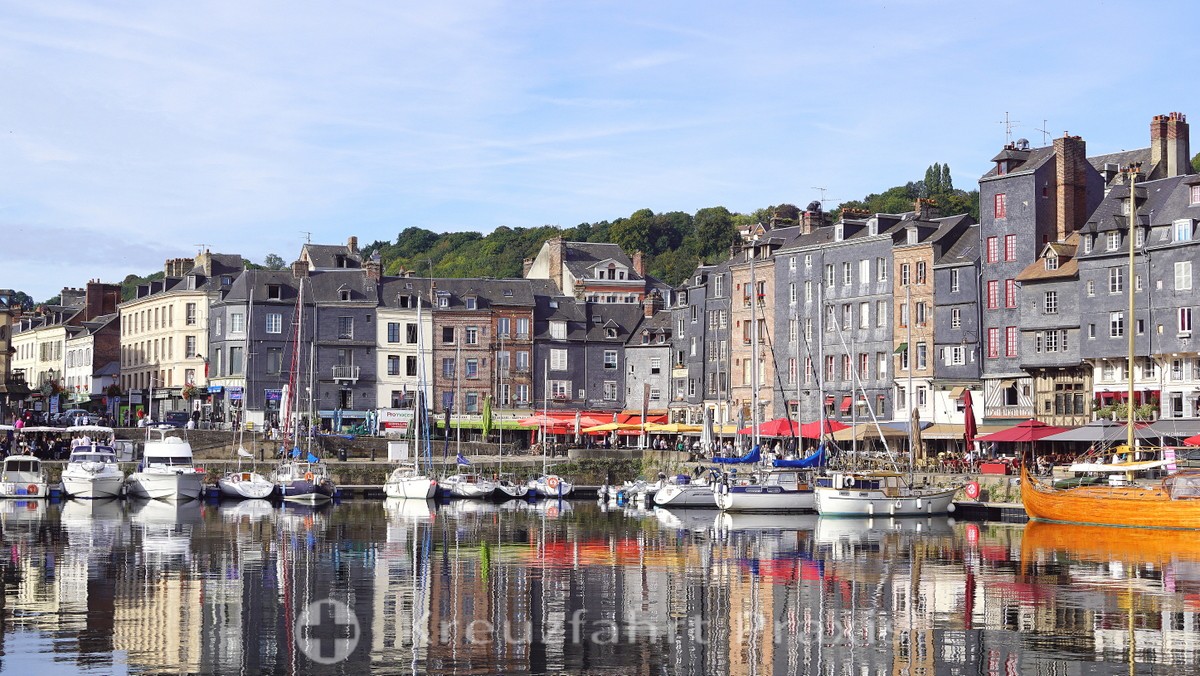 Honfleur is a French port city at the mouth of the Seine and the English Channel. The place has about 7.500 inhabitants and is located in Normandy in the Calvados department. The port of Honfleur has always been of little importance. That saved it from destruction - especially during World War II. 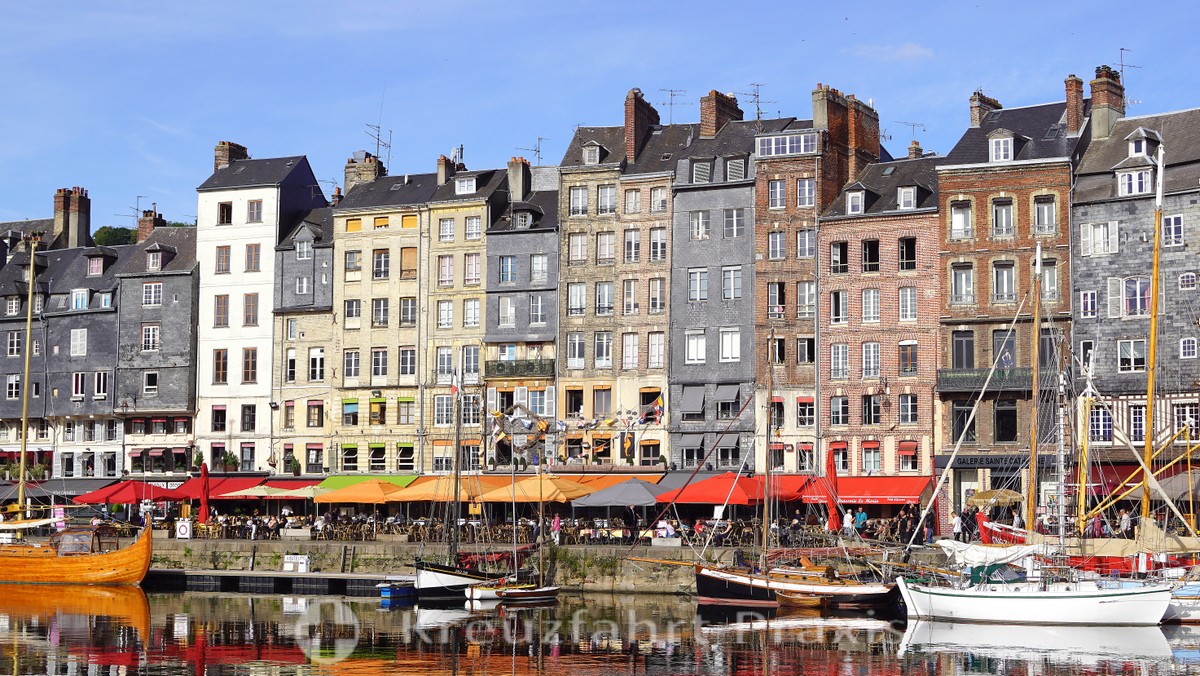 The sights in the center of Honfleur

Honfleur is a place out of a picture book. Over 1000 years old, it exerts a great fascination on visitors. Parts of an impressive fortification have been preserved from the Middle Ages. The narrow half-timbered houses, the cobblestone streets and the small harbor basins transport visitors straight to the 17th century. And Honfleur has been a popular destination for painters since the beginning of open-air painting. You can still see painters with their easels on the Vieux Port today, and in the narrow streets almost every second house houses an art gallery or workshop. 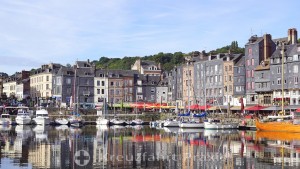 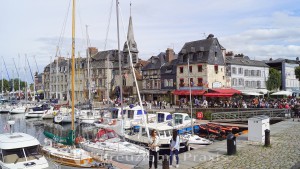 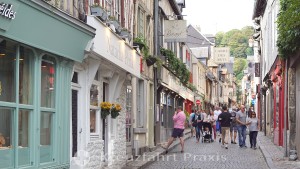 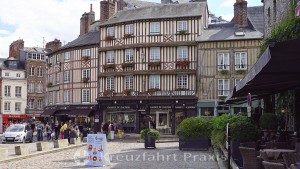 Around the old port (Vieux Bassin)

The old harbor basin with the many colored boats, the Quai Sainte-Catherine and the Lieutenance is the most famous motif of Honfleur. The port was built in the time of Louis XIV. The narrow half-timbered houses with colorful awnings on Quai Sainte-Catherine line the basin to the west. The Lieutenance on the north side was the seat of the governor and is part of the old fortifications from the 16th century. A plaque on the building commemorates Samuel de Champlain, who set out from Honfleur on expeditions to North America and also founded the Canadian city of Québec. In front of the town hall on the east side there is an antique children's carousel from spring to autumn. 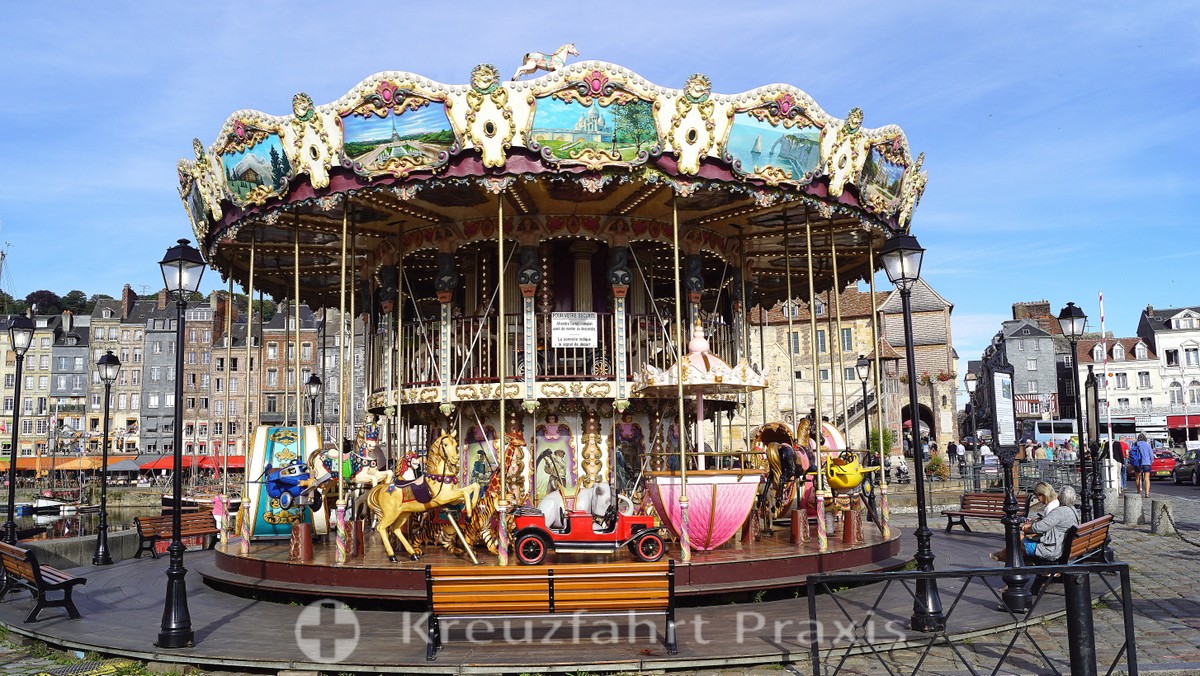 Children's carousel at the Vieux Bassin

It was built around 1900 and is a real eye catcher. Just like the very old St-Etienne church, which is also on the east side of the harbor basin and now houses the naval museum.

Sainte Catherine is the largest wooden church in France. It was built in 1468. As stones were scarce as building material, wood from the nearby Touques forest was used. The architecture of the church is unusual. From the outside it resembles a large warehouse, and the roof structure looks like two overturned boats. This is because ship carpenters built the two-aisled church. In any case, Sainte Catherine is worth seeing. The visit is free of charge. 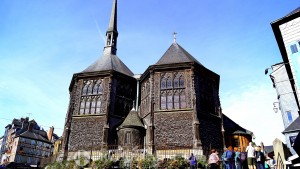 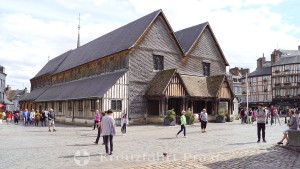 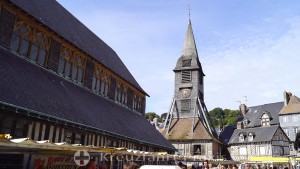 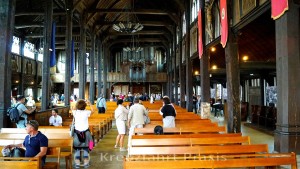 The bell tower is also made entirely of wood. It stands separately next to the church. The tower can be visited and climbed for a small entry fee.

Saint Léonhard is one of the old quarters of Honfleur. The heart of this district is the Saint Léonard church, whose facade dates back to the 15th century. The remarkable octagonal bell tower was built in 1760. A few steps lead from the church square to a covered washing area. The Claire, a stream that is fed by springs above Honfleur, flows there. The tanners and dyers used to work here. Now the beautiful square has been lovingly restored and invites you to take a little break. 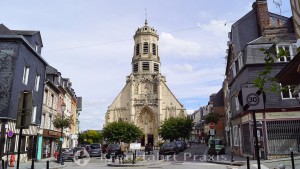 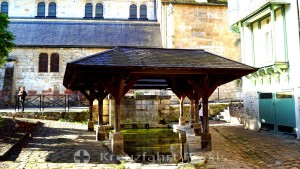 The salt storage facilities on Rue de la Ville are two warehouses that were built around 1670 and in which up to 10.000 tons of salt were stored. Today exhibitions, meetings or concerts take place there. The salt stores are well preserved. The high wooden ceilings, which look like a ship's structure, are particularly worth seeing. The visit is free of charge. 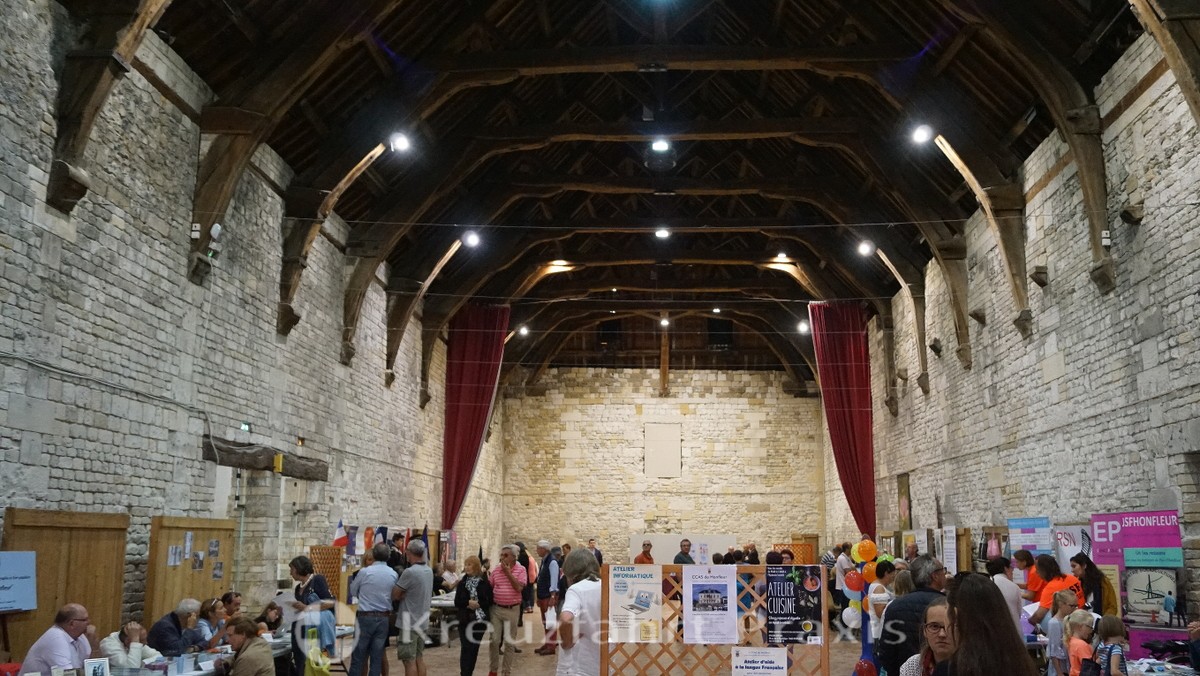 Honfleur has some nice museums. We recommend two museums dedicated to famous sons of the city and one that shows the long seafaring tradition.

The painter Eugène Boudin was born in Honfleur in 1824. He was one of the first open-air painters in France. Because of him, Honfleur is considered the cradle of impressionism. His works are exhibited in the museum as well as the works of other impressionists, for example the painter Claude Monet or Gustave Courbin. The museum is an absolute must for art lovers.

The Marine Museum is located in the former church of St. Etienne. It is the oldest church in Honfleur and was built in the 14th and 15th centuries. The museum follows Honfleur's seafaring tradition and has extensive collections of model boats and nautical charts. 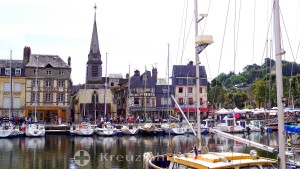 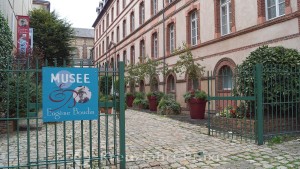 Honfleur also has a lot to offer around the historic center.

Côte de Grâce is a region above Honfleur. The hill is about two kilometers away from the center, steep streets lead up. Sights of the Côte de Grace are the Notre Dame de Grace chapel, the Mont Joli viewpoint and the Ferme Saint-Siméon. 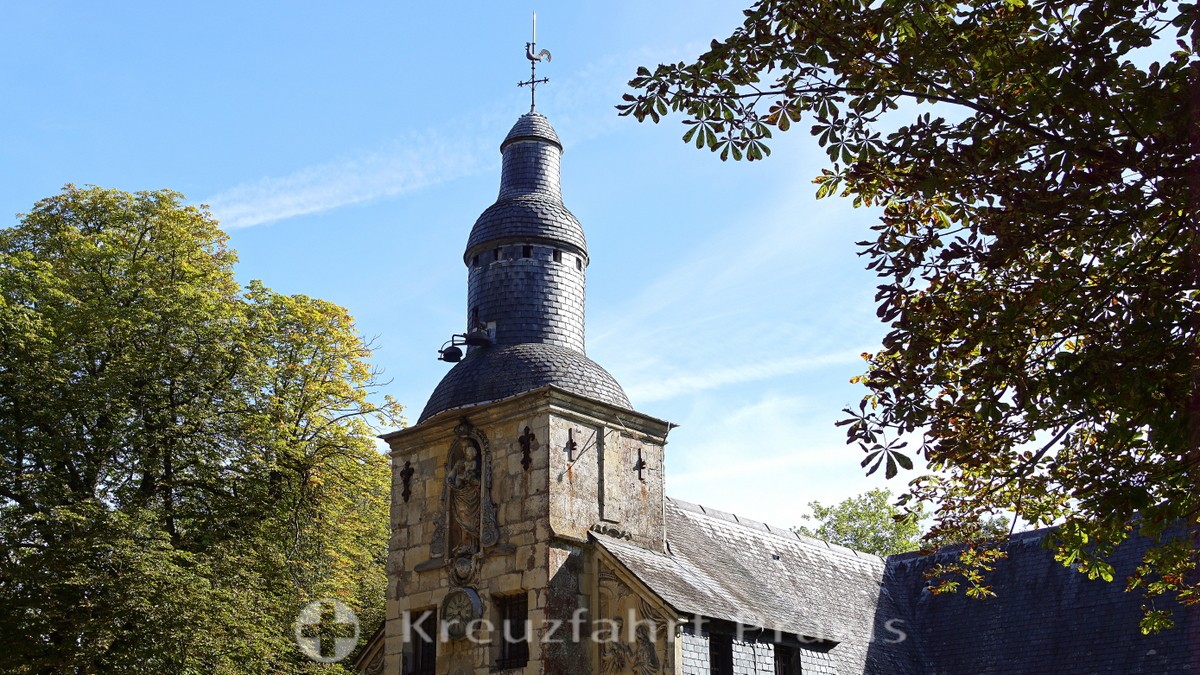 Notre Dame de Grâce was built between 1600 and 1615. Next to the small chapel, where services are regularly held, there is a carillon that is worth seeing and hearing and which sounds every hour on the hour. Not far away, from the Mont Joli viewpoint, you can enjoy a panoramic view of Honfleur, the Seine and the Normandy Bridge. The former artists' colony Ferme Saint-Siméon used to be the meeting place for Boudins and his friends and is now a 5-star hotel. 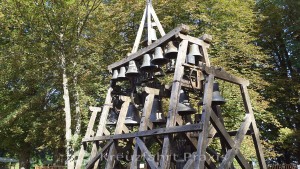 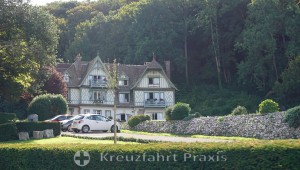 Naturospace is the largest butterfly garden in France. At a constant 28 degrees you can marvel at thousands of butterflies and the most beautiful exotic flowers from orchids to bougainvilleas. There is a breeding area where you can watch butterflies emerge and open their wings for the first time. Naturospace is a small tropical paradise.

If you follow the promenade from the port towards the beach, you will reach the garden of personalities. In this garden stand the busts of those who shaped the cultural and historical legacy of Honfleur. Among them: the painters Boudin, Monet and Jonkind, the artists Satie and Baudelaire, the sailors Lepaulmier and Champlain.

The cable-stayed bridge Pont de Normandie spans the estuary delta of the Seine. It connects Honfleur and Le Havre in the Seine-Maritime department. With a main span of 856 meters, it is one of the longest bridges in Europe. The clearance for ships is 56 meters.

Those who no longer want to walk can see some of the beauty of Honfleur in a comfortable way. We recommend the Petit Train or one of the excursion boats. 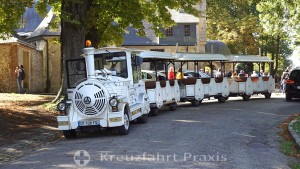 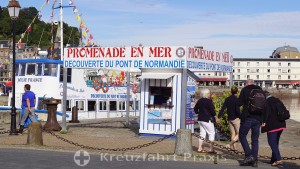 The little train travels through the village, along the beach and past the Ferme Saint-Siméon to the Notre Dame de Grâce chapel. There is a break there, also to enjoy the beautiful view from above, before going back to the village.

Honfleur is the port for deep sea and river cruises. The ocean-going ships dock at the Quai de Seine. 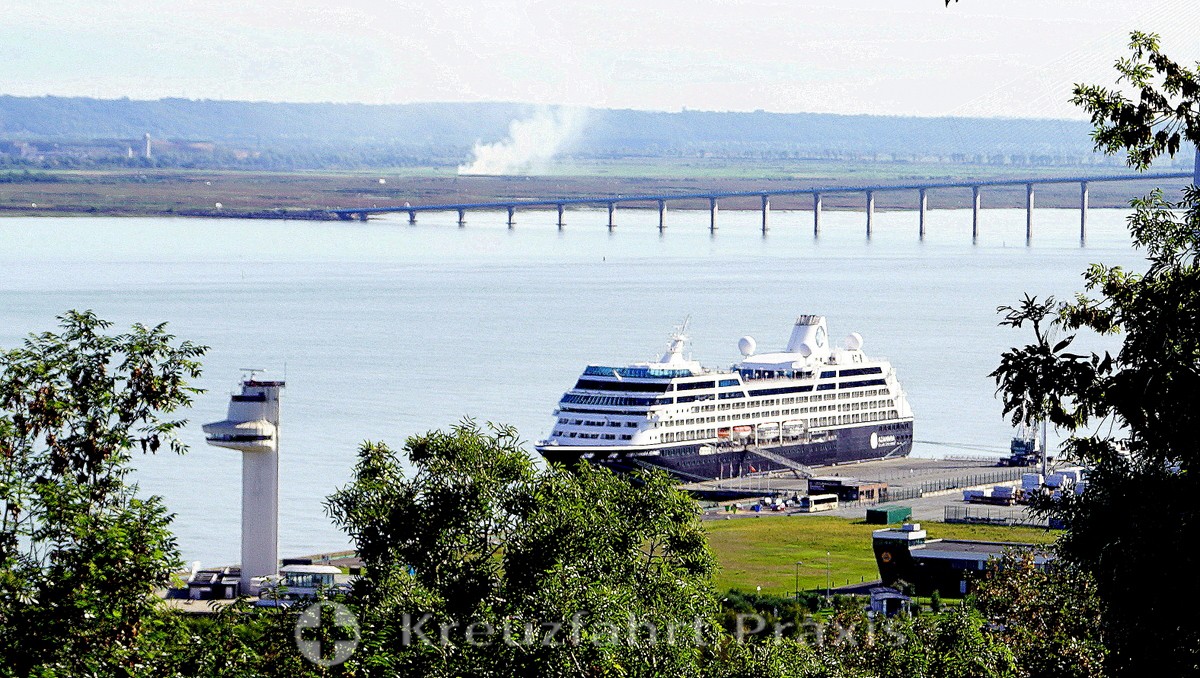 The distance to the place is about more than a kilometer. There is a tourist information booth in the cruise terminal. A shuttle bus runs between the pier and the town center.

The river boats dock in the Bassin de l'Est, within walking distance of the town center