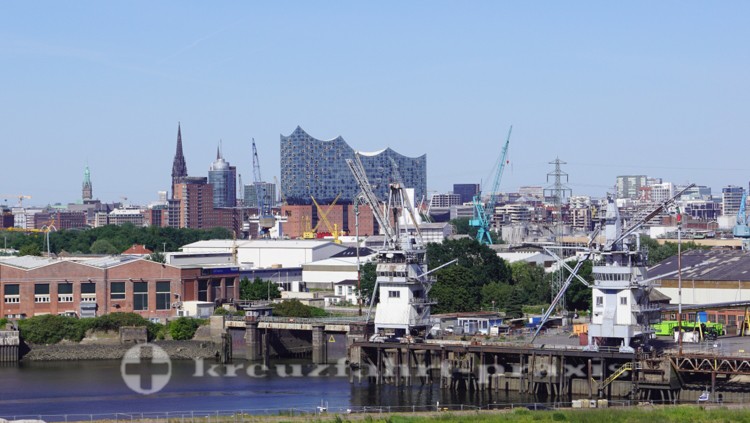 Cruise ships call at three terminals located in different port areas in Hamburg. In exceptional cases, small cruise ships dock directly at the Überseebrücke. The HafenCity, Altona and Überseebrücke terminals are ideally located for individual activities. There are direct bus and underground connections available to passengers. The modern and well-organized Steinwerder Terminal, on the other hand, is located in the port area. From Steinwerder, cruise ship guests first take the shuttle bus to Veddel S-Bahn station and from there take the S-Bahn to the city.

In general: Hamburg offers a wide variety of modes of transport. All interesting urban destinations can be easily reached in a short time. What to see during a one-day stopover in Hamburg? Our Hamburg favorites are:

The port of Hamburg

A boat trip through the 72 square kilometer port is interesting and offers a variety of photo opportunities. Some of the Hamburg sights described below are on the route of the boats. The duration of the harbor tours is 60 to 120 minutes, depending on the route. In addition, there are also special trips.

The starting point for harbor tours are the St. Pauli Landungsbrücken. 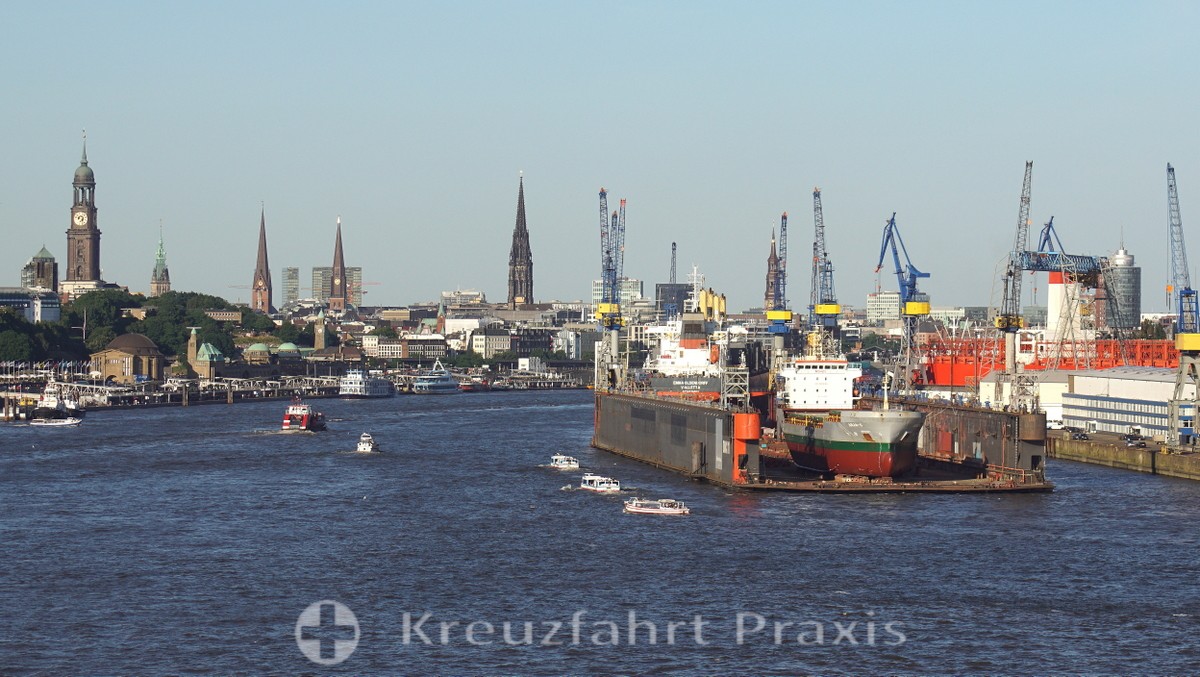 The landing stages were named after the St. Pauli district. They are a tourist attraction and a transport hub for buses as well as underground and suburban trains. The old Elbe tunnel borders the landing bridges. 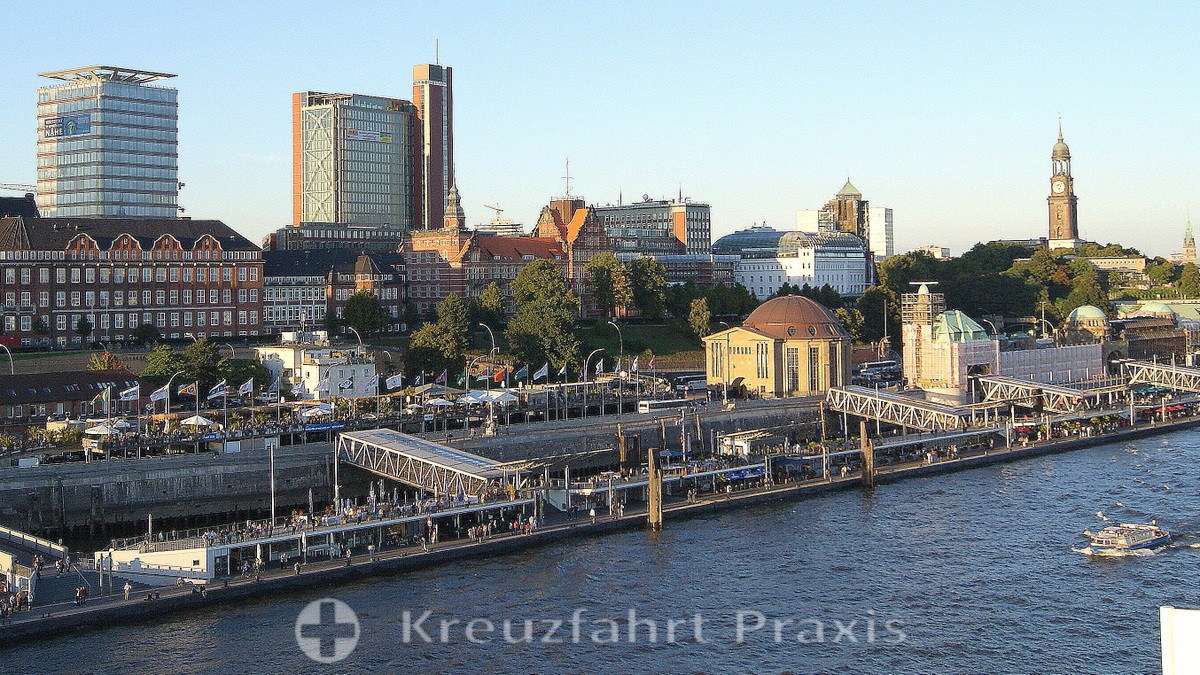 The landing stages were built in 1907. The pier consists of a massive 205-meter-long building complex and nine movable bridges leading to the pontoons. Originally, passenger ships docked at the nearly 700-meter-long facility. The landing stages are characterized by two towers with distinctive green domes. The construction is a listed building.

Lovers of traditional ships and historic boats will find what they are looking for on the Elbe at the Neumühlen / Övelgönne pier. The tradition of old work ships is maintained in the oldest German museum harbor. The ships were used on the Elbe before they were taken out of service. The exhibits also include the lightship Elbe 3 and the steam icebreaker Stettin. The tranquil district of Övelgönne adjoining the harbor is well known to Hamburgers because of its fishing and pilot houses built on the banks of the Elbe.

In addition to the traditional ships of the Museum Harbor Oevelgönne, the following ships can also be visited:

The 97 meter long, steel three-masted Rickmer Rickmers has been a freighter for a long time. The ship later served between 1924 and 1962 under the name "Sagres" as a sailing training ship for the Portuguese Navy. The ship is under its first name at the Hamburg Landungsbrücken. The green painted ship cannot be overlooked there. 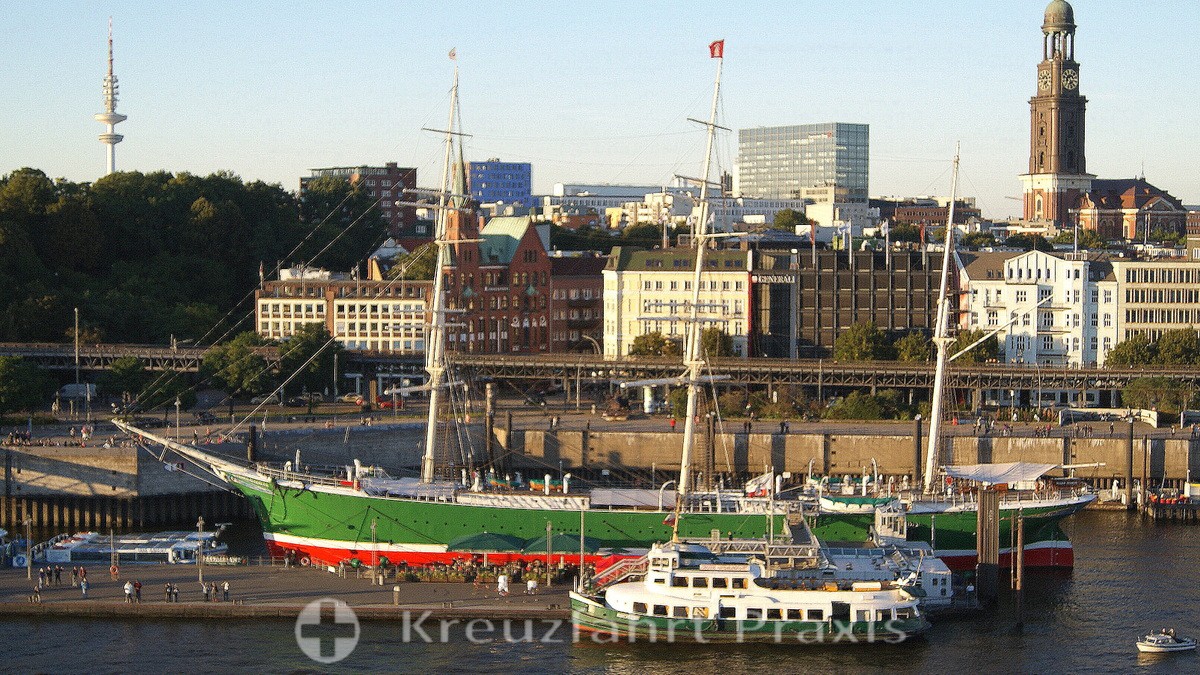 The 159 meter long Cap San Diego is located at the Überseebrücke. The general cargo ship, which was completed in 1961, operated in liner service to South America until the 1980s. The cargo ship also offered some well-equipped passenger cabins. Since 1987 the "Hamburg Admiralty Foundation" has been responsible for the maintenance and management of the museum ship. There is a restaurant and a small hotel on board. The Cap San Diego is seaworthy and runs guest trips several times a year. 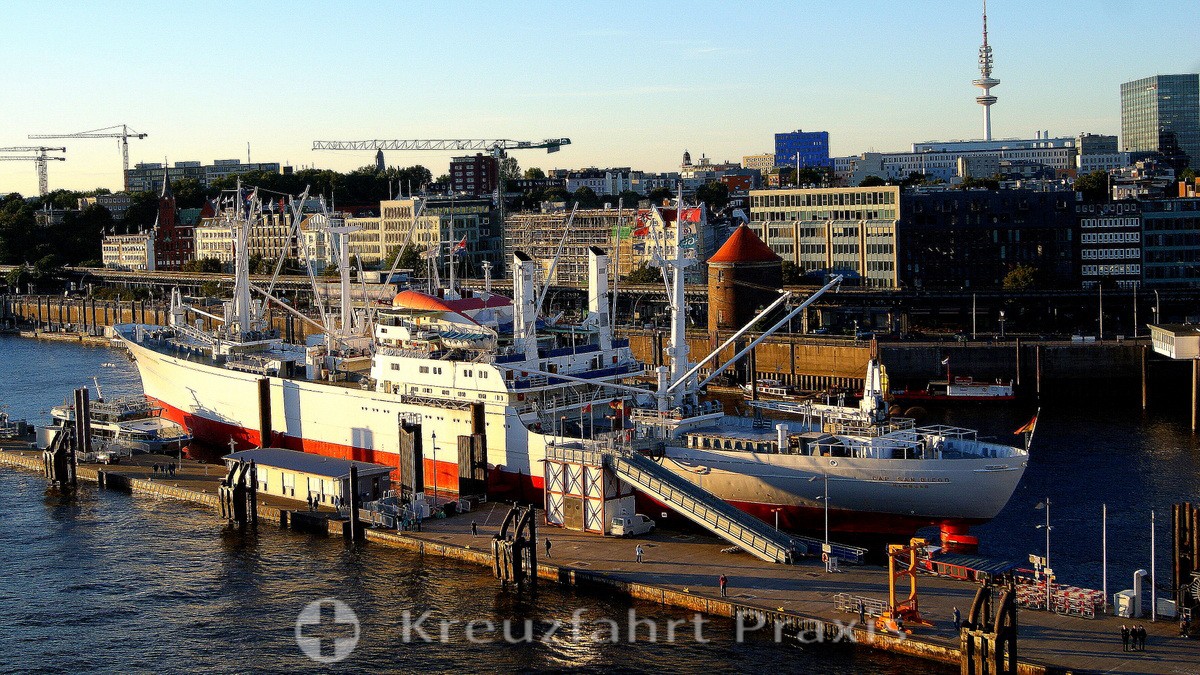 Another seaworthy ship is the Russian submarine 434. The 90 meter long and only 8,72 meter wide ship was built in 1976 and handed over to the U-Bootmuseum Hamburg GmbH in 2002. 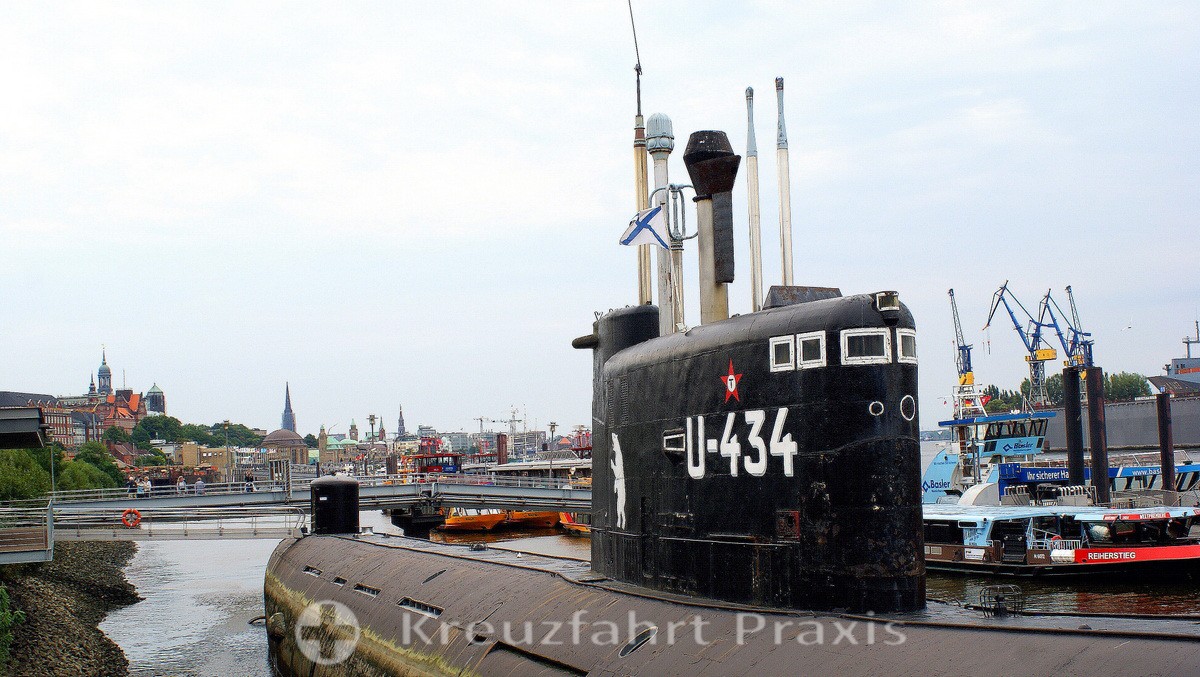 After a long construction period and ten times the budgeted construction costs, the epoch-making structure was completed in autumn 2016. Hamburg's new concert hall was built on an old harbor warehouse. In addition to two concert halls, the building offers space for a luxury hotel, 44 apartments, a restaurant and a souvenir shop. The surrounding viewing platform, known as the “plaza”, is reached by visitors via an 82-meter-long escalator. Definitely worth seeing!

The plaza is freely accessible. However, the number of visitors is limited. It is therefore advisable to book an access ticket on the Internet in advance. This service currently costs two euros.

The building, resembling a city palace, is the seat of the citizenship and the Hamburg Senate. The town hall, built in the style of the North German Renaissance, was built between 1884 and 1897. The building has a total of 647 rooms and halls. The large ballroom is 50 meters long.

The Alsterarkaden are within sight of the town hall on the Alsterfleet. Together with the Mellin-Passage, the arcades are among the oldest upscale shopping areas in Hamburg. After the great city fire of 1842, the town hall market had to be redesigned. The lead architect borrowed from Italian and Greek architecture. The result was the Alsterarkaden, which offers cafes, shops and restaurants. 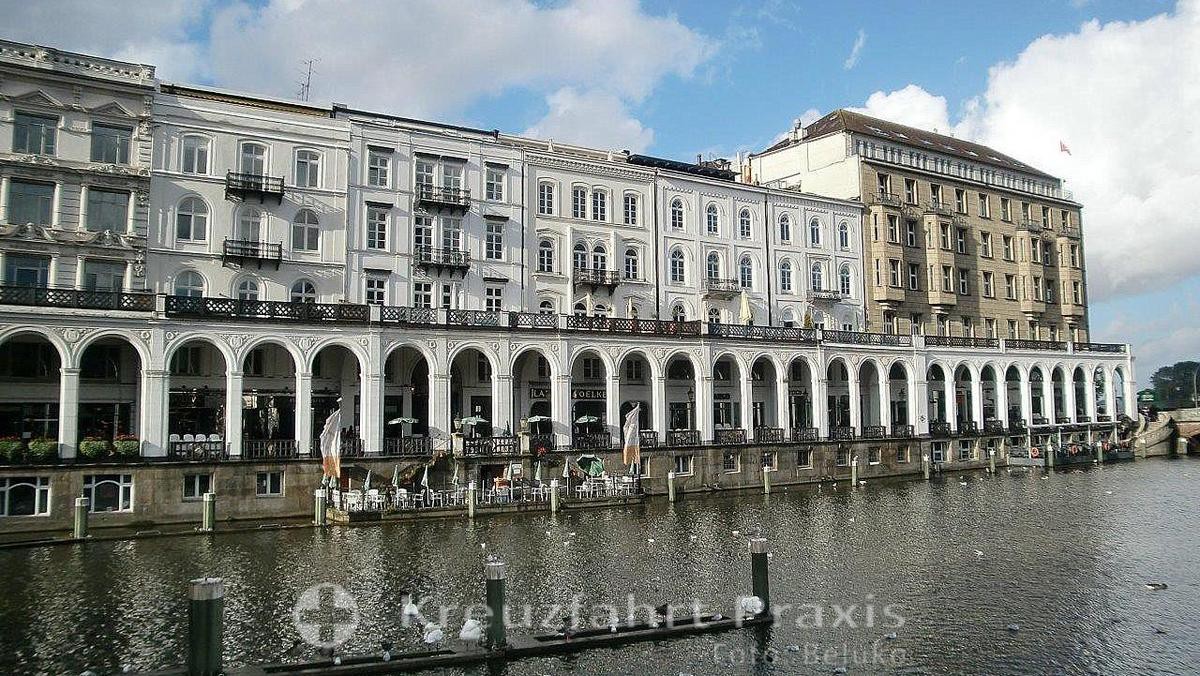 An office building rarely makes it onto the list of UNESCO World Heritage Sites. The Chilehaus, built between 1922 and 1924, achieved the feat. With ten storeys, it was one of the first skyscrapers in the Hanseatic city. To the east, the building presents itself with a tip resembling a ship's bow.

The Colonnaden street connects the Neue Jungfernstieg with the Esplanade. It is one of the oldest pedestrian zones in Hamburg. There are also arcades with small specialist shops, cafés and restaurants.

The Dockland office building has been located on the Elbe right next to the Altona cruise terminal since 2005. The building is striking because of its cross-section. It has the shape of a parallelogram. 136 steps lead at a height of 25 meters to a freely accessible 500 square meter roof terrace. It offers a beautiful view. 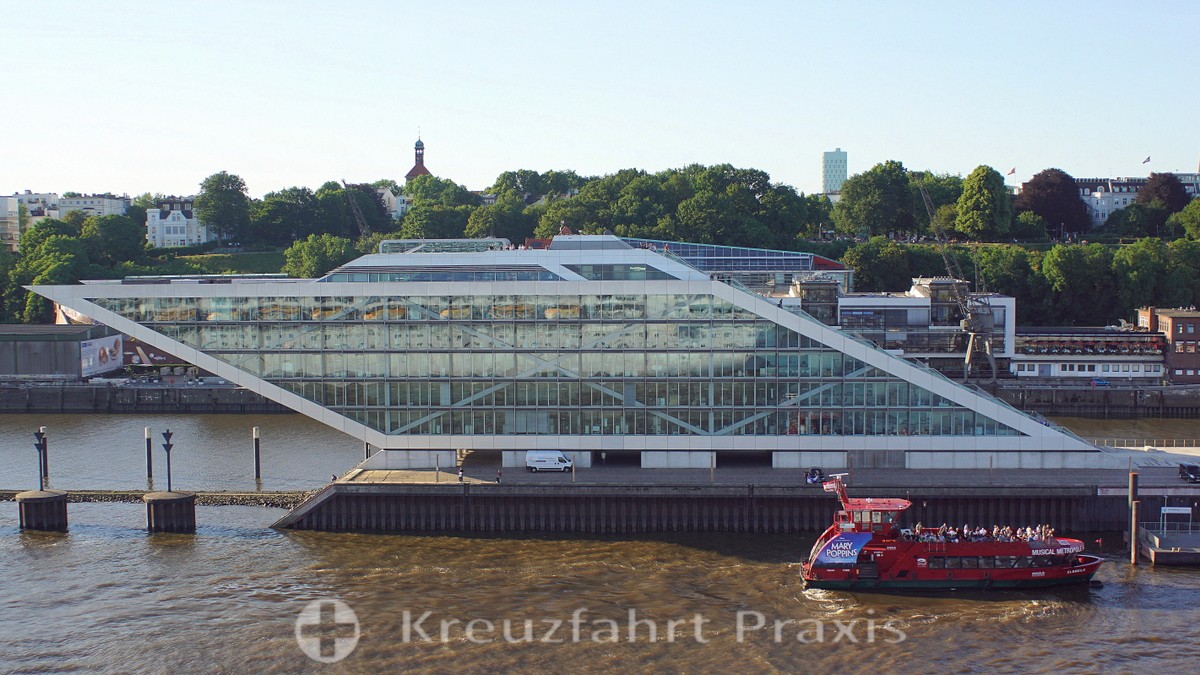 The Old Elbe Tunnel has been connecting the Landungsbrücken with the port area since 1911. The 426 meter long tunnel is a listed building. It is mainly used by pedestrians and cyclists. But motorists can also cross the Elbe underwater. The cars are carried down with elevators. The hallmark of the tunnel is its green dome. 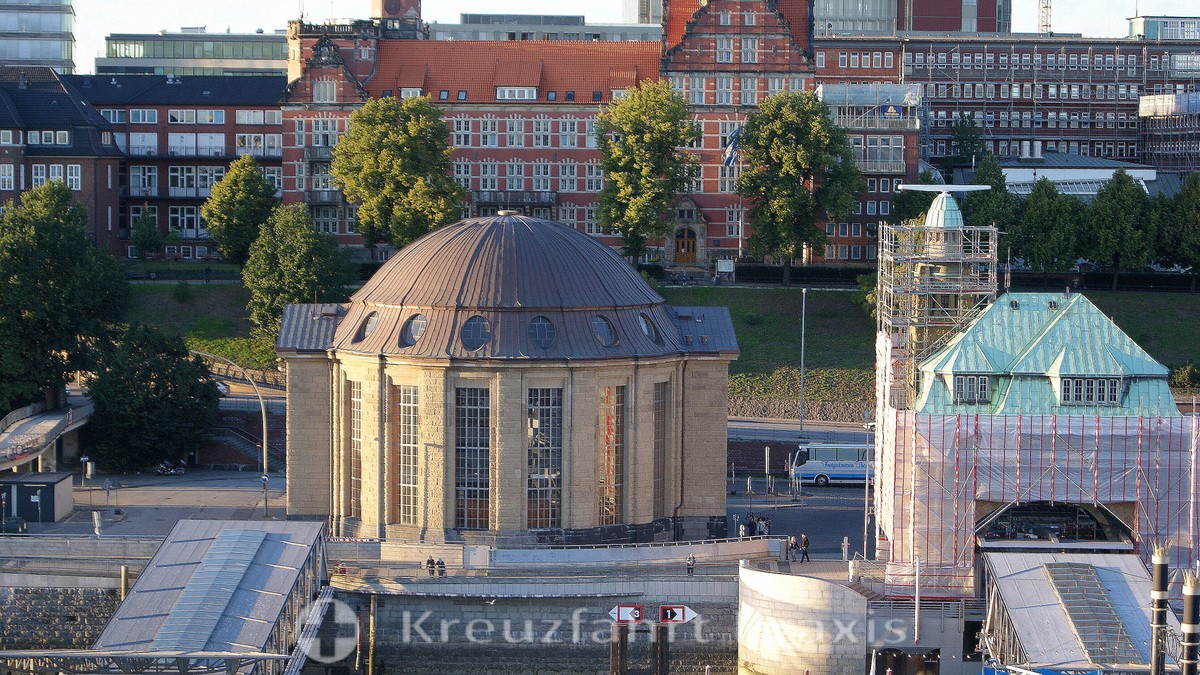 St. Michaelis is the most important baroque church in Northern Germany and undoubtedly the most famous church in Hamburg. And it is one of Hamburg's landmarks. The main church, consecrated to Archangel Michael, has stood at its location since 1669. It burned down twice and was completely rebuilt. The current construction was completed in 1912. The striking church tower is 132 meters high. There is a viewing platform at a height of 106 meters. When the visibility is good, it provides unique views over the city. The impressive church interior measures 52 by 44 meters.

Address: Englische Planke 1
Entry to the church is free of charge; Donations are requested. The elevator ride up to the viewing platform costs 5 euros.

The church in the center of the Hanseatic city was badly hit by aerial bombs in July 1943. After the war, the Hamburg Senate decided not to rebuild the church. Instead, the tower and the choir were dedicated as a memorial to the “victims of war and tyranny between 1933 and 1945”. The church tower is a listed building. Since 2005, a glass panorama lift has been running inside the tower to a viewing platform at a height of 76 meters. 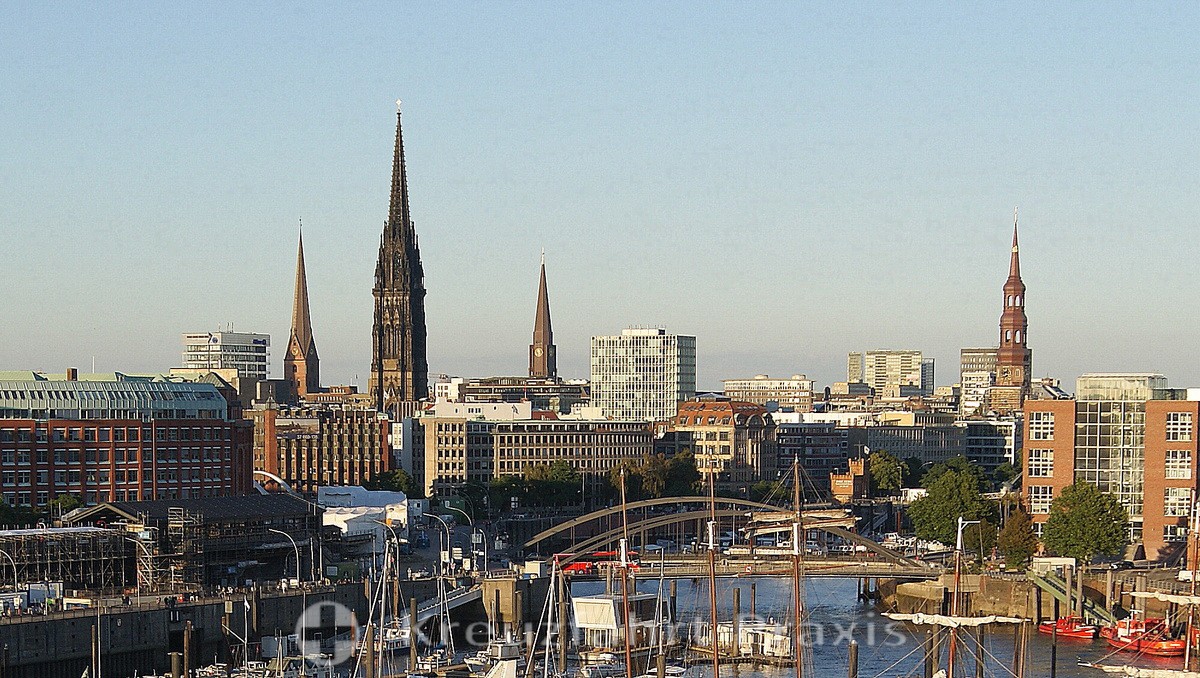 Tower of the Nikolaikirche

In the St. Pauli district, which was originally located just outside Hamburg, those who could not pay the Hamburg citizens' allowance settled. Or people who did unpleasant or smelly jobs. With the expansion of the port, St. Pauli was equated with Reeperbahn, Große Freiheit and easy girls. The fish market with the former fish auction hall is located in St. Pauli. The Beatles memorial stands at Reeperbahn 174 in St. Pauli. In St. Pauli there is a wax figure cabinet with the Panoptikum Hamburg. The privately run Schmidt Theater, known far beyond Hamburg's borders, is located on St. Pauli's Spielbudenplatz.

The district, located eleven kilometers west of St. Pauli, is one of the most beautiful and most expensive residential areas in Hamburg. The staircase district is enchanting with the old fishermen's houses, many of which offer a view of the Elbe. Hamburg-Blankenese is easy to see from the cruise ship passing by.

Blankenese can be reached easily and inexpensively with the S1. 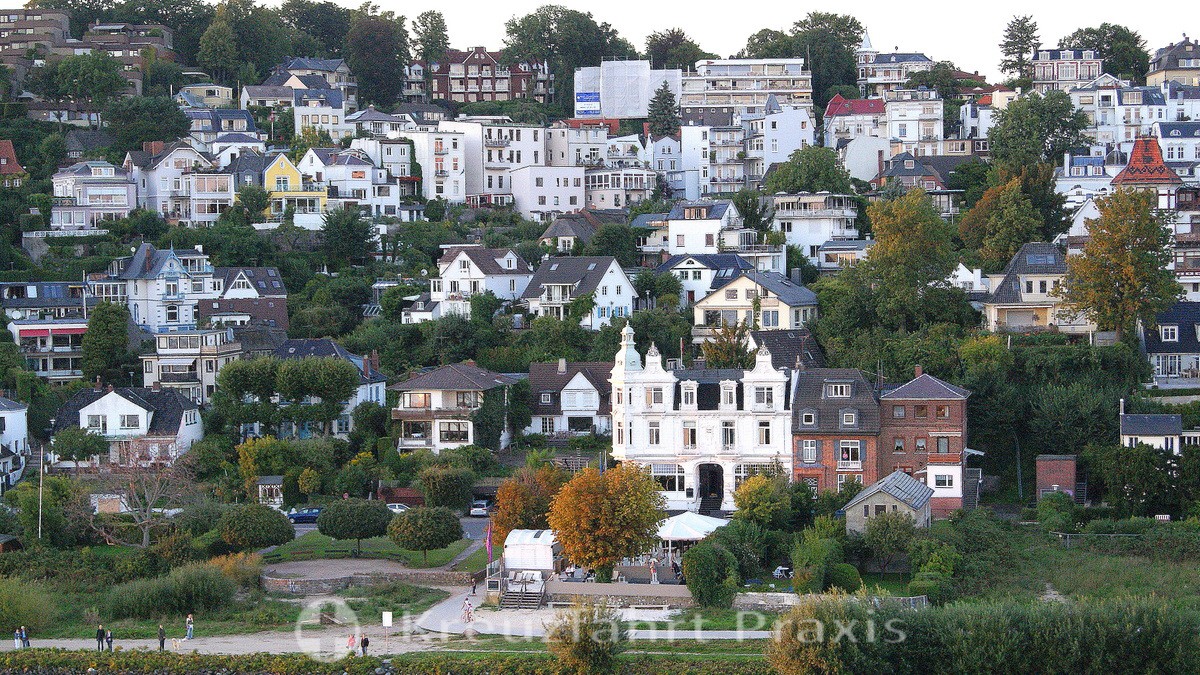 Elbe slope in the Blankenese district

HafenCity is Hamburg's newest district. She is fed up with bodies of water and initially attracted a lot of criticism. It was said that the highest square meter prices in the city were demanded and paid in the retort district. HafenCity is the home of the rich. According to SPIEGEL ONLINE, there are an average of three cars per resident in the garage. - HafenCity is currently Europe's largest inner-city development project. After the planned completion in 2030, over 100.000 people will live and work in this region.

Passengers whose ships dock at the HafenCity terminal land directly in the newly built district, which is already attractive today.

This means the city center around the Inner Alster. Highlights are the Jungfernstieg, the Altsterarkaden, the Hamburg City Hall, the Alte Post, the office buildings and the extensive network of well-tended shopping malls.

To explore the district, you should start at the Jungfernstieg underground station. 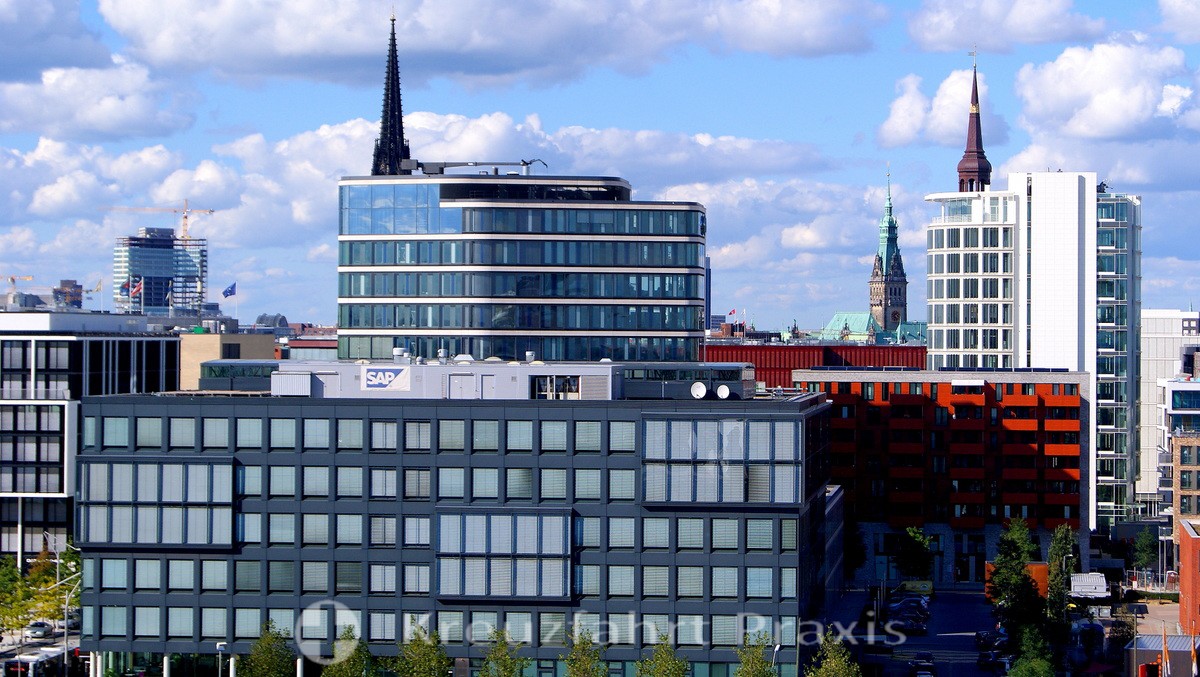 Commercial buildings in the center

The view from the Michel's viewing platform proves it: Hamburg is an extremely green city. Contributing to this are the inner and outer Alster, the Elbe beach between Övelgönne and Blankenese, the Planten un Blomen park, the 389 hectare Ohlsdorf cemetery and the Hagenbeck zoo. Each of these destinations is a sight in itself.

All in all, Hamburg has over 60 museums. The most important collections include the Kunsthalle, the Deichtorhallen and the Museum am Rothenbaum, Cultures and Arts of the World (MARKK; formerly: Völkerkundemuseum). The first two are in the center; the MARKK is close to the center on Rothenbaumchaussee. Each of the facilities is well worth a visit.

Hamburg is a destination for all seasons. Nonetheless: in the summer when the sun is shining, Hamburg shows its best side. Then you can really enjoy yourself in Hamburg. On rainy days, on the other hand, the weather is not bad, you just wear the wrong clothes.