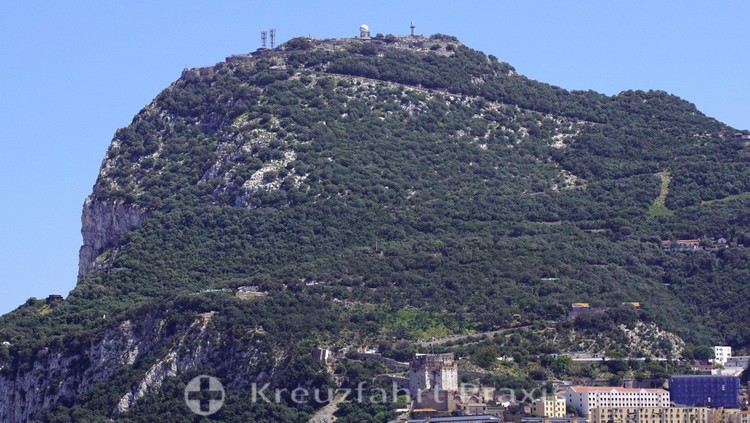 Gibraltar - shore excursion on your own

Gibraltar is an ideal destination for day trippers on cruise ships. Even before mooring, the British enclave on Spanish soil impresses the ship's passengers with striking sights: the Rock of Gibraltar and the fortifications that are visible everywhere. 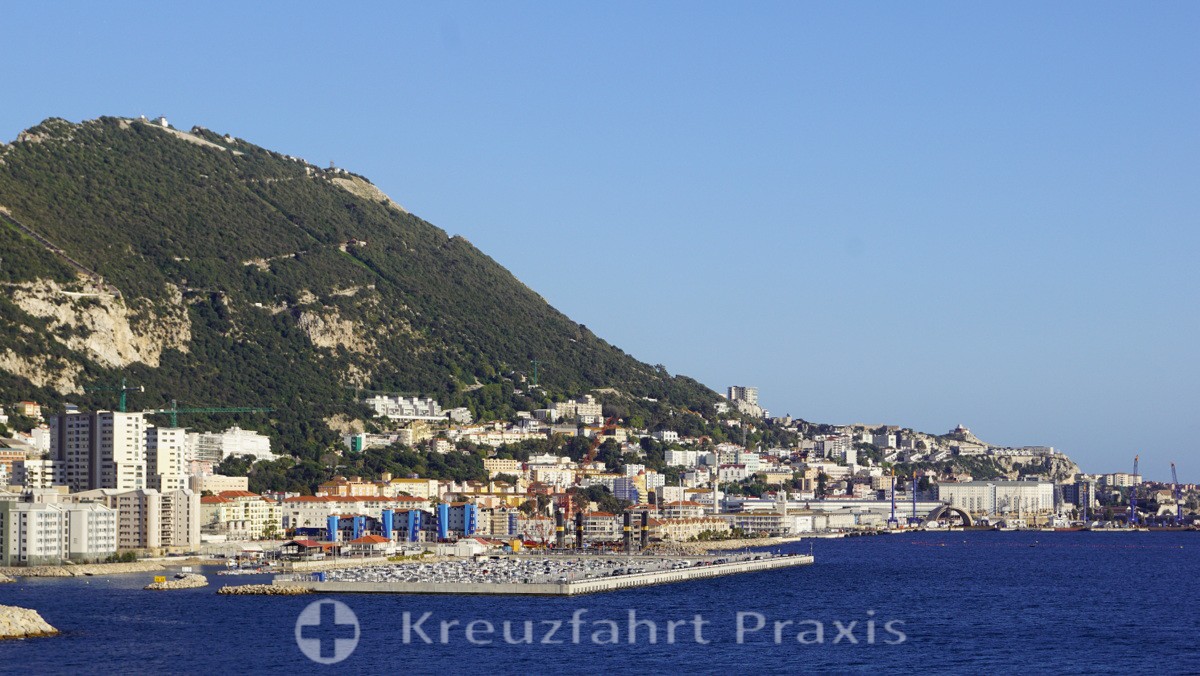 Panorama of the Crown Colony of Gibraltar

We know from experience: The attractions of the 6,5 square kilometer British crown colony with its almost 35.000 inhabitants are accessible to visitors within a day. There is no need to take part in guided tours. Thorough preparation and the use of public transport including the cable car are sufficient.

In April 2019 visited the brand new Mein Schiff 2 Gibraltar. We are also on board the ship. With a 14 hour stopover, passengers are offered a comfortable stopover. Our individual tours are now for those places that we have not yet seen on previous stays. And as before, we again entrust ourselves to the public buses. 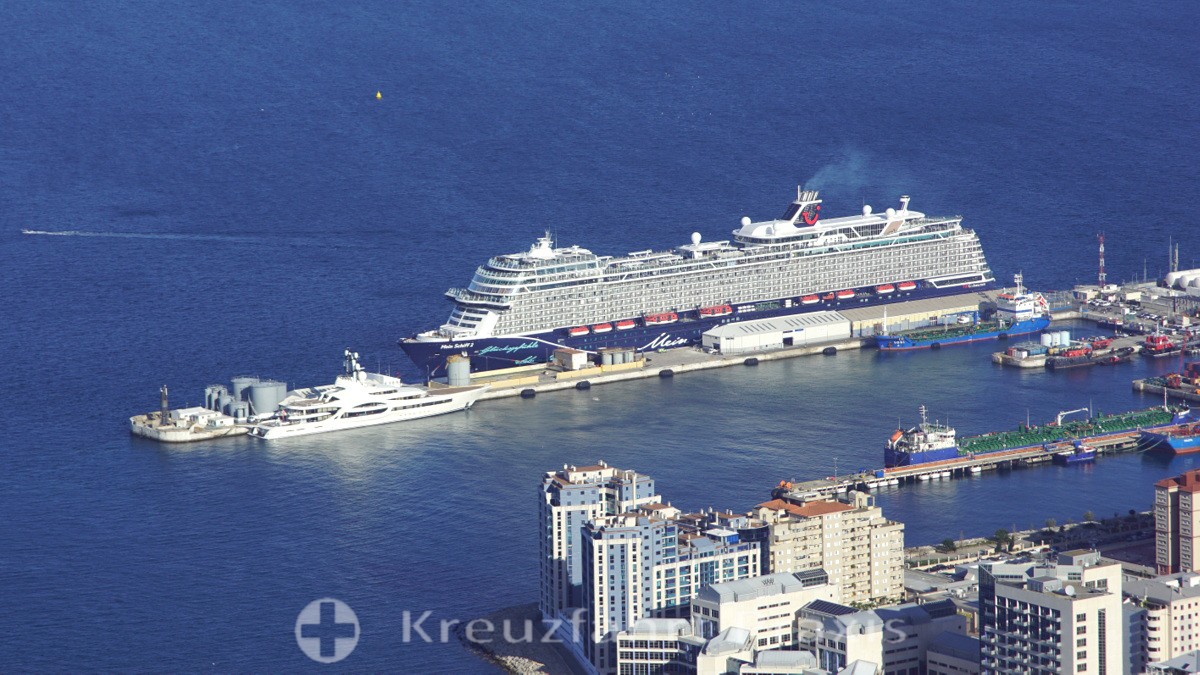 Buses do not stop at the cruise terminal. The nearest stop, North Mole Road, is 400 meters away.

We start with the Upper Rock

During our visits to Gibraltar, we were always drawn to the Upper Rock, the limestone cliff up to 426 meters high, because of the view. The cable car is the easiest and fastest means of transport to reach the viewpoints over 400 meters high. Incidentally, many collective taxis also go up on the rocks. 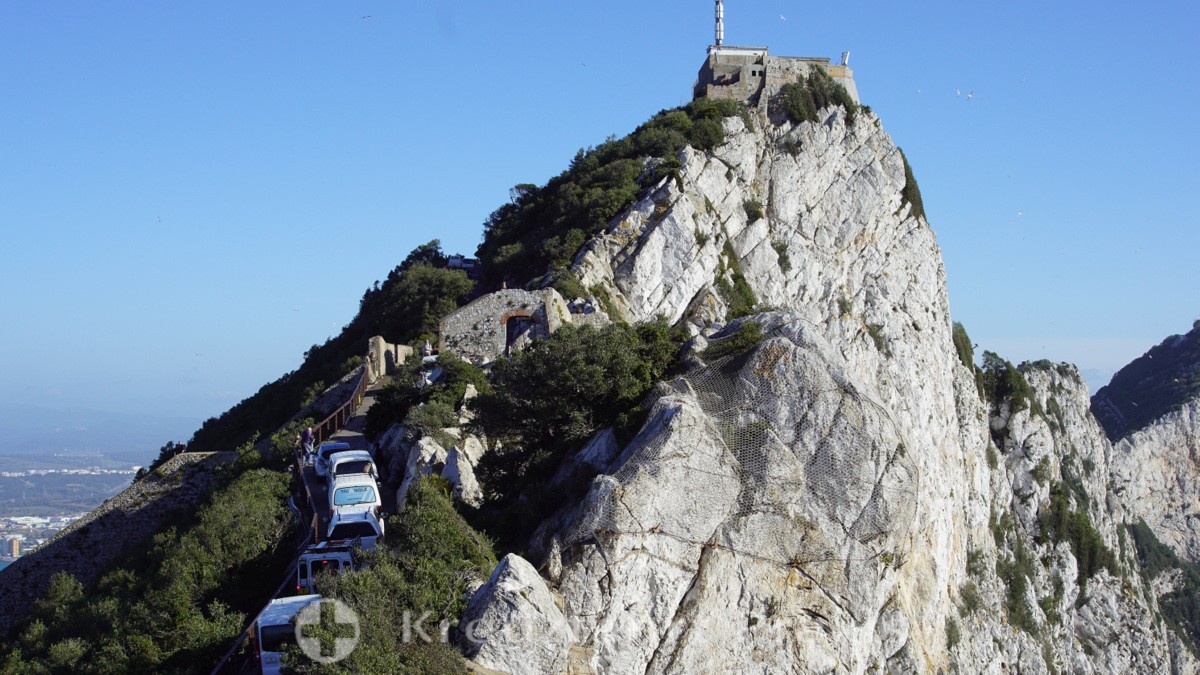 Taxis on the way to the rock

From the viewing platform of the cable car station, we can enjoy a phenomenal view of the city, the cruise terminal, the airport and the Spanish countryside belonging to the province of Cádiz at a height of 412 meters.

Below the mountain station, at 340 meters above sea level, is the Skywalk, Gibraltar's new attraction. 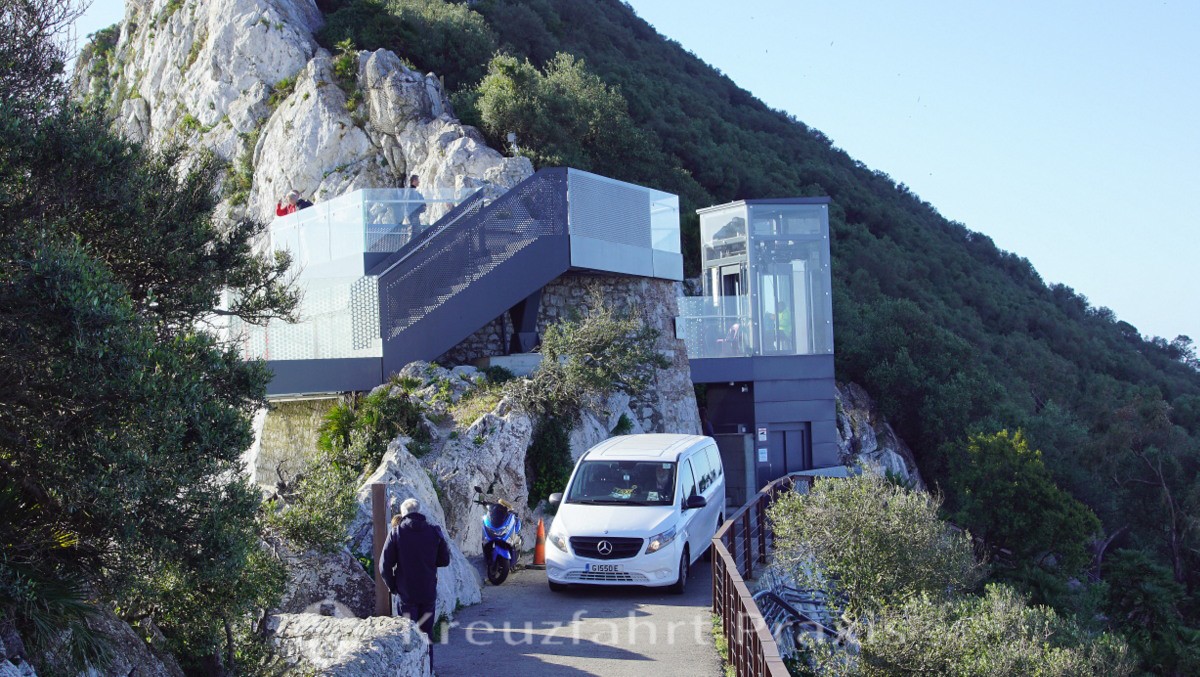 Mark Hamill was responsible for inaugurating the glass viewing platform on March 21, 2018 with a lightsaber in style. The name Hamill means nothing to you? Mark Hamill played the legendary Luke Skywalker in five Star Wars films.

The Skywalk also offers uninterrupted panoramas of the city and the Strait of Gibraltar. We enjoy the view of Morocco and Spain and watch the fearless Barbary macaques frolicking on the Skywalk. Then we go back to the cable car station and follow the downhill roads until we get to Queen's Road. From there we follow the signs leading to the Great Siege Tunnels.

After the War of the Spanish Succession ended, the Rock of Gibraltar fell to England in 1713. Which did not prevent Spain from further claiming the rock for themselves. For protection, England expanded Gibraltar into a fortress. When Spanish and French troops attacked and besieged Gibraltar for the last time between 1779 and 1783, the first defense tunnels at great heights were hewn into the rocks and blown up. They were named Great Siege Tunnels. We visit the extensive tunnel system. You can see gun emplacements with cannons, powder chambers and other military objects.

Below the Great Siege Tunnels are the World War II Tunnels. Their task was to protect Gibraltar from an expected attack by the German Wehrmacht in World War II. A tunnel system is enough; we save ourselves a visit to the World War ll Tunnels.

Instead we visit Willis's Magazine with the exhibition “Gibraltar, a City under Siege” and the Queen Charlotte's Battery with the Moorish Castle.

The construction of the Moorish Castle began in the 8th century under Moorish rule. The fortress was built around 1160. The Tower of Homage, which dominates the complex, is dated to 1333. Because of him, the fort is visible from afar. 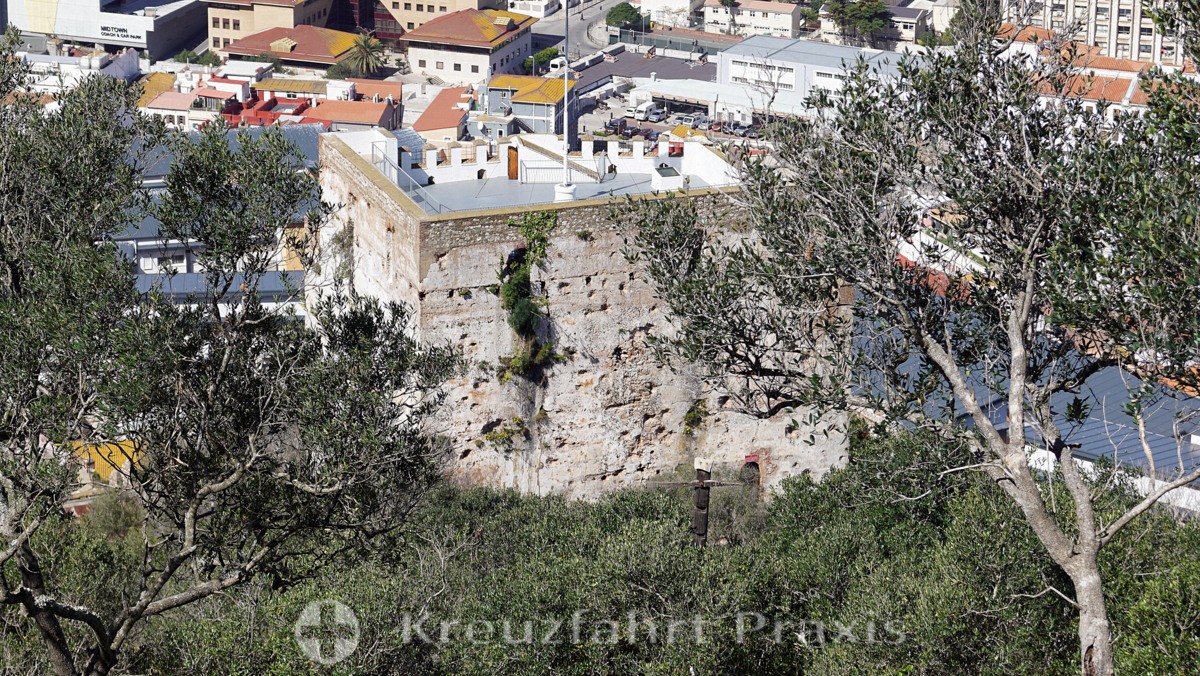 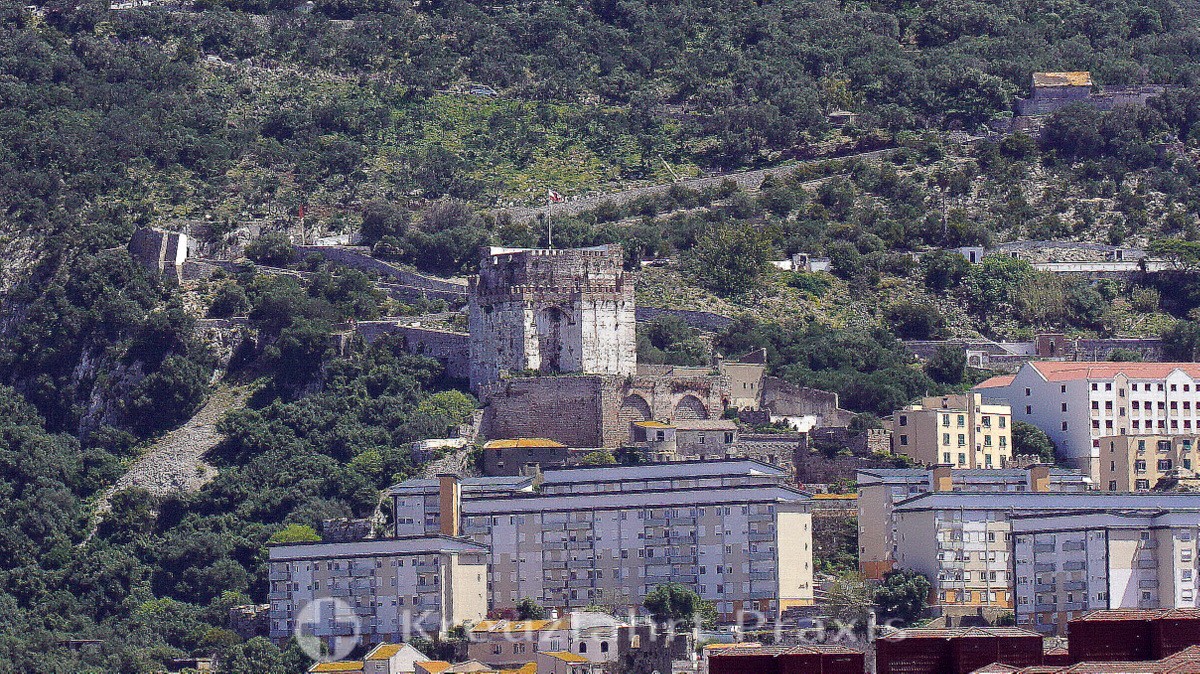 Tower of Homage - seen from the cruise ship

Time for a lunch break! We return to our cruise ship by bus number 1. Since it does not leave Gibraltar until ten o'clock in the evening, we have plenty of time for a second round in the afternoon.

In the afternoon we visit Europa Point, the flat southern end of Gibraltar. The lighthouse, the Ibrahim-al-Ibrahim mosque and the Sikorski memorial are all worth seeing. Another highlight is Gorham's Cave, a kilometer away. According to excavations, it was inhabited by Neanderthals more than 25.000 years ago.

An important building at the southern end of Gibraltar is the lighthouse built in 1841. The range of its light cone is given as 37 kilometers.

The mosque was completed in 1997. It serves as a prayer room for the Muslim population, who mainly come from Morocco.

The Sikorski monument is located near the lighthouse. General Wladyslaw Sikorski was Prime Minister and Commander-in-Chief of the Polish government-in-exile during the Second World War. He was killed in an airplane accident off Gibraltar in July 1943. The monument commemorates the Polish war hero.

England's role as a world power at the end of the 19th century called for leading weapons technology. As the largest cannon of its time, the 100 Ton Gun fulfilled this requirement. It was originally posted at two points in Gibraltar and in Malta, UK. Gibraltar's only remaining 100 ton gun is now in the Napier of Magdala Battery on Rosia Bay. 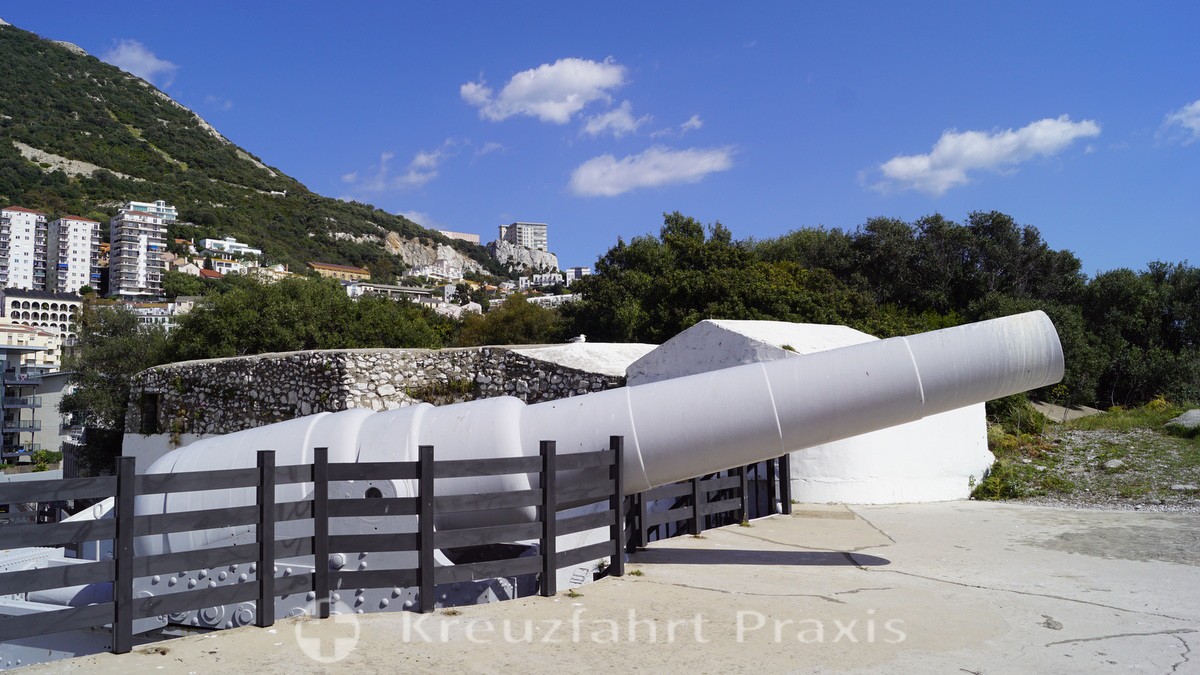 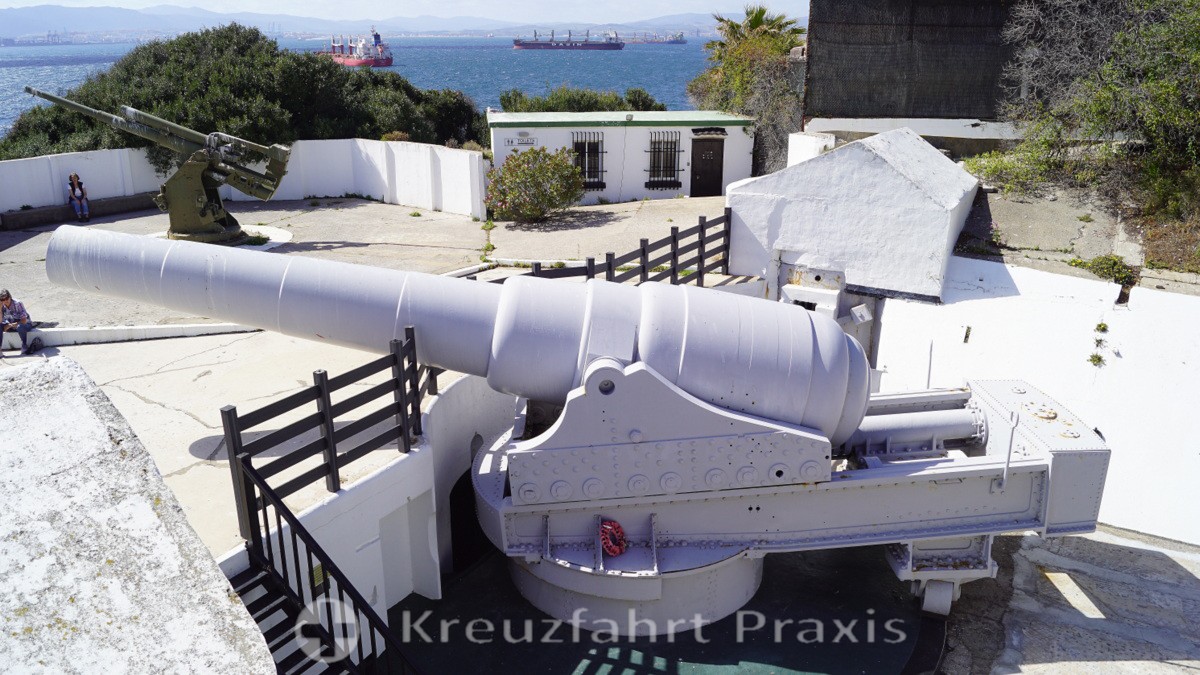 The Alameda Botanic Gardens and Trafalgar Cemetery are green oases in Gibraltar's cityscape. The botanical garden is especially worth a visit. The attractively designed garden area presents Mediterranean plants and trees in a small area. Next door is the Wildlife Park, a small zoo.

Another highlight can be seen from the garden. It's the Windsor Suspension Bridge. The suspension bridge leads over a gorge at a height of 50 meters. The length of the bridge is 71 meters. It also provides the best views of the Strait of Gibraltar, the bay and the city. 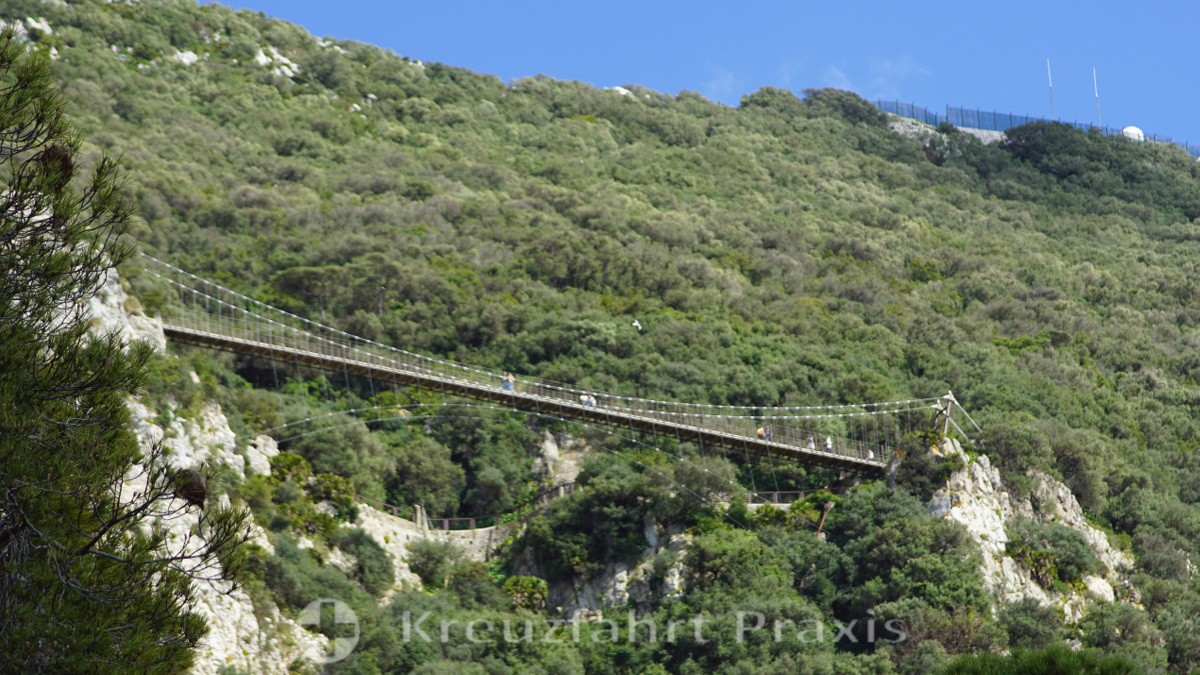 Use of the bridge is included in the entry price for the nature reserve. 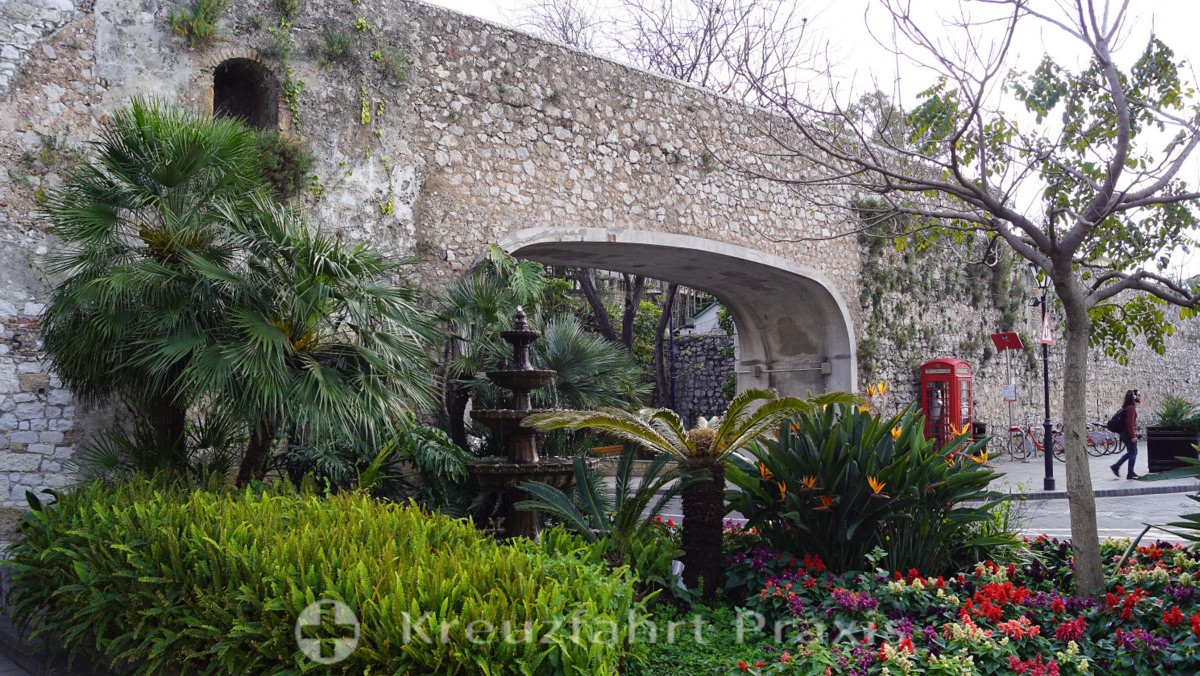 City wall with the referendum gates 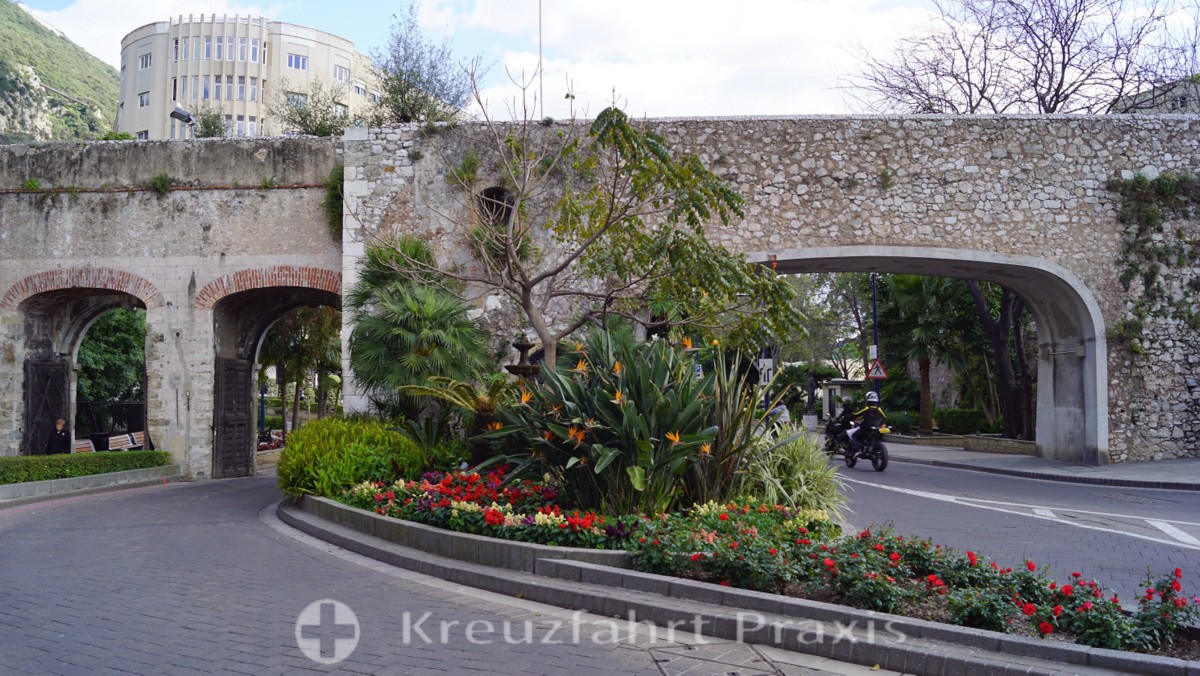 Main Street begins behind the city gates. It is home to the Inces Hall Theater, the Convent, the seat of the governors, and other notable public institutions. Main Street is a partially walkable commercial street. The Anglican and Roman Catholic cathedrals and the parliament are also located on it. And, as befits a British city, there are also a good number of pubs and bars. In a pub we rest from our tour, enjoy the hustle and bustle and a pint of beer.

Then we stroll to Casemates Square. It is now early evening and people are gathering in the bars and restaurants of the central square. It was named after the British barracks that border the north side. 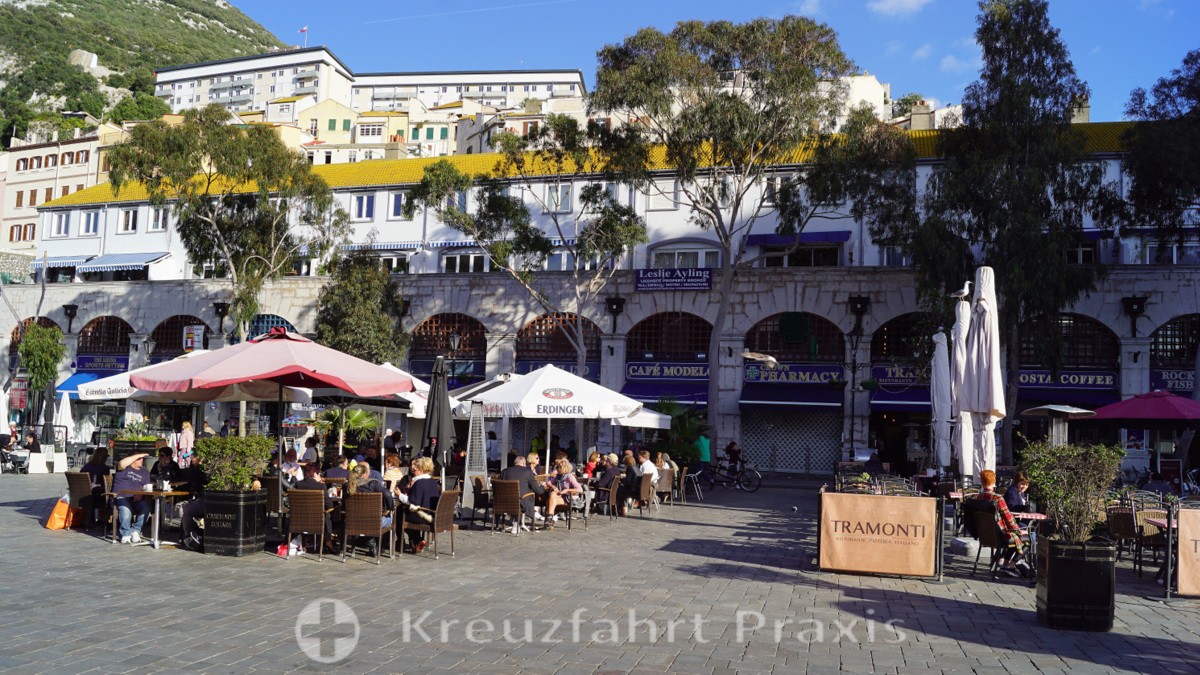 We take the bus towards the cruise terminal. We made sufficient use of the Hopper Adult day ticket. We bought it from the bus driver for 6 Gibraltar pounds. It is valid until midnight and allows the use of any public bus. We would not have been able to cope with our extensive sightseeing program on the day without buses.

Information on the bus routes is available below www.gibraltarbuscompany.gi erhältlich.