In April 2019 the New Mein Schiff 2 in the port of Barcelona. The capital of the Spanish region fulfills two essential functions for the shipping company and its passengers. It is an attractive cruise destination and it is ideally suited for logistical purposes. Truck fleets regularly bring supplies from Germany to Barcelona. According to the shipping company, an estimated 3.000 guests on board the cruise ship would like to be supplied with familiar goods and food. An example: Even baking mixes for bread are delivered from Germany.

In the past few years we have visited Barcelona repeatedly on cruise ships. We got to know many of the sights of Barcelona in this way. The local mountain Tibidabo is still missing from our list. The first thing we will visit today. With a height of 520 meters, the Tibidabo is remarkable. The attractions of the summit are the church Templo Expiatori del Sagrado Corazón, the adjacent Tibidabo amusement park and the fantastic view that the height offers us onlookers.

The Sacrat Cor church is a must-see in Barcelona

We're not coming for the amusement park; we come for the church. The Catalans call them “Sagrat Cor” for the sake of simplicity. The "Sacre Coeur" church in Paris provided the model for the church building.

It was built in several stages between 1902 and 1961. The house of God, built in neo-Gothic style, is crowned by a bronze statue of Christ. It reminds us of “Cristo Redentor” in Rio de Janeiro, high up on the Corcovado mountain. Barcelona's statue of Christ does not reach the dimensions of the original by far; it is still admirable. The church was elevated to a basilica in the year of completion.

We enter Sagrat Cor from the level of the crypt. Their stained glass windows are remarkable. An elevator goes up from the crypt to the first viewing platform. The trip costs two euros. It's money well invested. From this platform it goes up stairs to a second viewing terrace. There is the more than seven meter high statue of Jesus. The Christ statue in the Sagrat Cor basilica

How to get there?

We leave Barcelona's cruise terminal with the port bus. The bus stops at Estació Marítima. Past the Museu Marítim de Barcelona and the Columbus Column, we walk a few hundred meters to the Drassanes Metro. With line 3 we go to Plaça Catalunya; there we change to line 7. We leave the train at Avinguda del Tibidabo station and take the bus to the valley station of the Funicular de Vallvidrera. 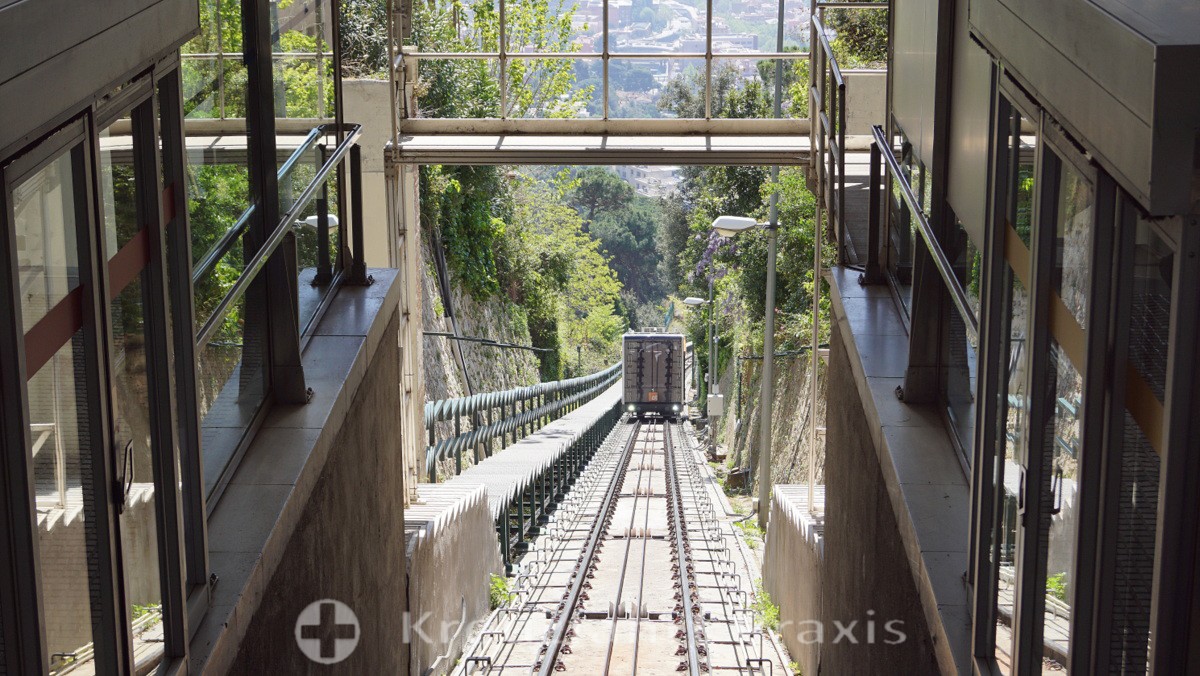 If the train is not running, a replacement bus service is offered.

Barcelona owes the former clinic complex, built in the style of modernism, to the Catalan banker Pau Gil. In his will, the financier ordered the construction of a clinic complex consisting of 48 pavilions. It should be built in a spacious garden. The construction work cost more money than expected. In 1911 the foundation's funds were used up. Only a quarter of the planned buildings were completed. The city of Barcelona continued the construction project. However, the number of constructions was reduced to 27 and the work was completed in 1930. The clinic was called from then on Hospital of Santa Creu i Sant Pau.

Since 1997 the hospital is under the protection of the UNESCO world cultural heritage. It is no longer used as a clinic; today international organizations use the beautiful buildings.

Lavish decors adorn the facades: Sculptures, mosaics and floral elements in particular catch the eye. In addition to the main building, only a few pavilions are accessible.
Current ticket prices: 15 euros; Discounts are granted.

The Sagrada Familia in passing

A kilometer walk separates the Hospital de Sant Pau from the spectacular new church of the Sagrada Familia. The dead straight one Avinguda de Gaudí represents the shortest connection between the two sights. The pedestrian street is lined with cafes, restaurants and many shops. Terraces in front of the cafés invite you to linger. 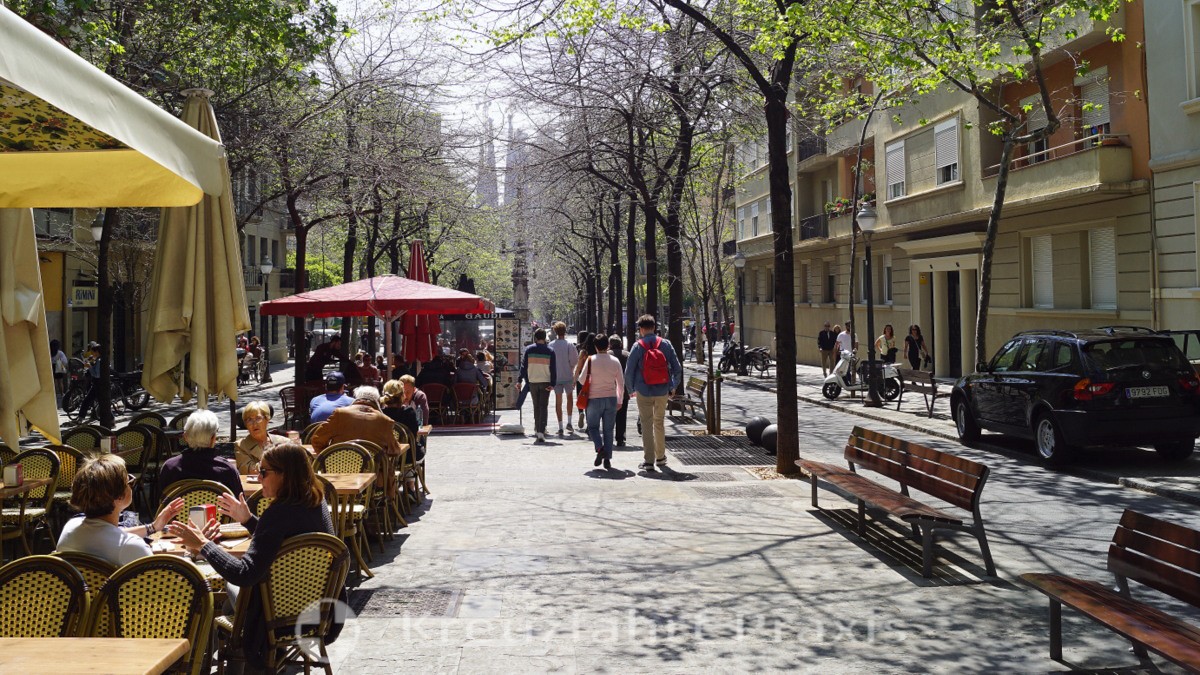 In our post from August 2017 In the footsteps of Antoni Gaudí we described the fantastic church under construction. Now, two years later, the gigantic structure is nearing completion. The towers are taller than ever before. Much remains to be done by 2026, when the task of the century is planned to be completed. 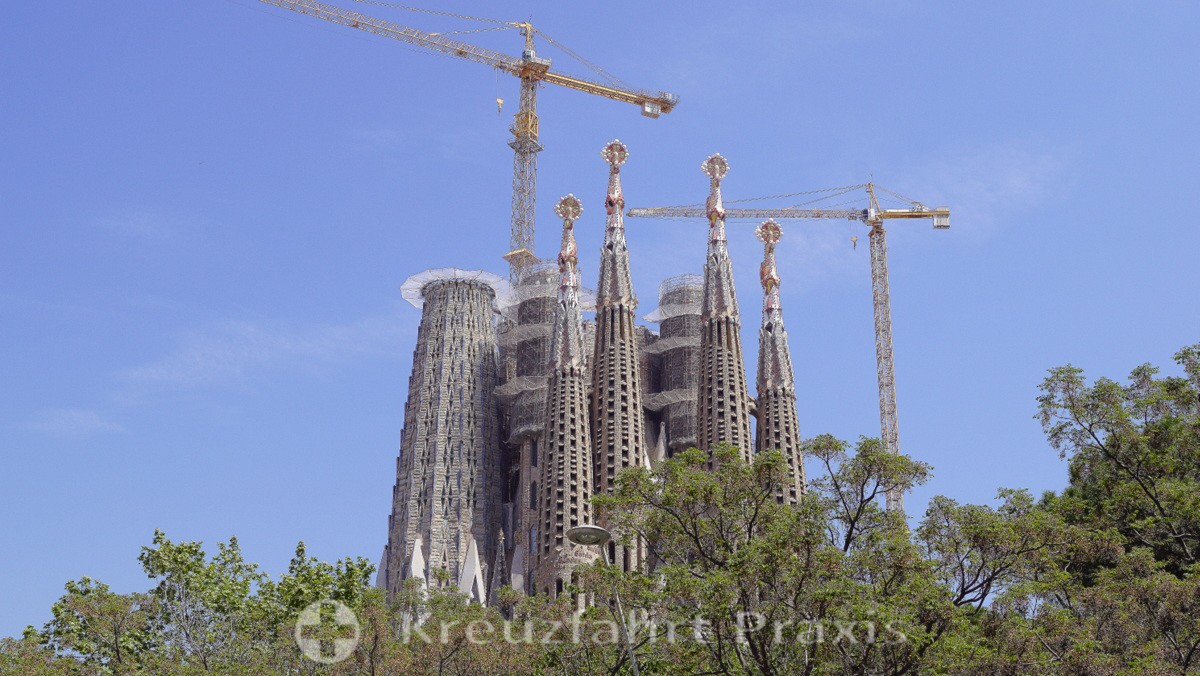 The construction of the Sagrada Familia is proceeding

Passeig de Sant Joan runs between the Arc de Triomf and the Travessera de Gràcia. In the northern area, the street looks like a park. There is the little one Mercat de l'Abaceria.

Starting at Monument to Mossèn Jacint Verdaguer The street, which was previously clogged with through traffic, has been converted into a boulevard for strollers and cyclists since 2012. Bars, cafes and restaurants have been lining the promenade ever since. Similar to the Rambla, it is not completely exempt from through traffic. The media cheered the street up to the “area of ​​trendsetters” and the “best location in Barcelona”. We feel that is more than an exaggeration. 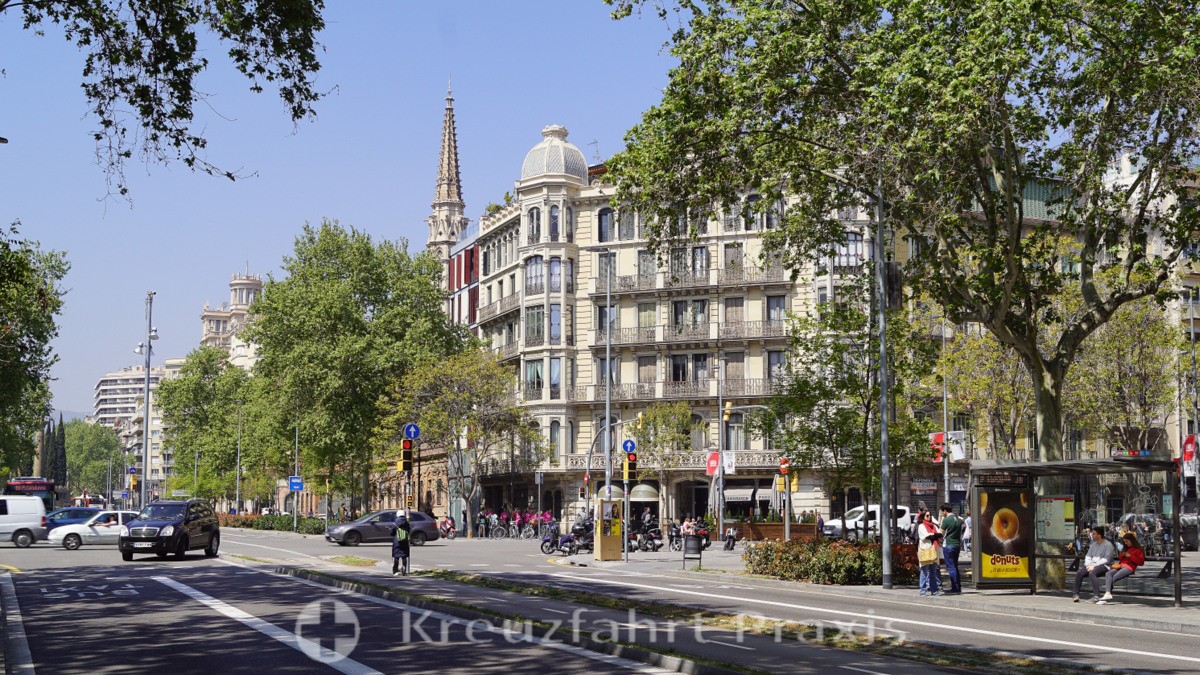 One of the most beautiful buildings in the city stands on the northeastern edge of the old town of Barcelona. It's the Arc de Triomf. This triumphal arch was built as the main entrance gate to the Barcelona World's Fair in 1888. It stands at the beginning of the promenade leading to the Parc de la Ciutadella Passeig de Lluis Companys. The brick archway is over 30 meters high. Built in the neo-Mudejar style, the facade invites you to look and be amazed. 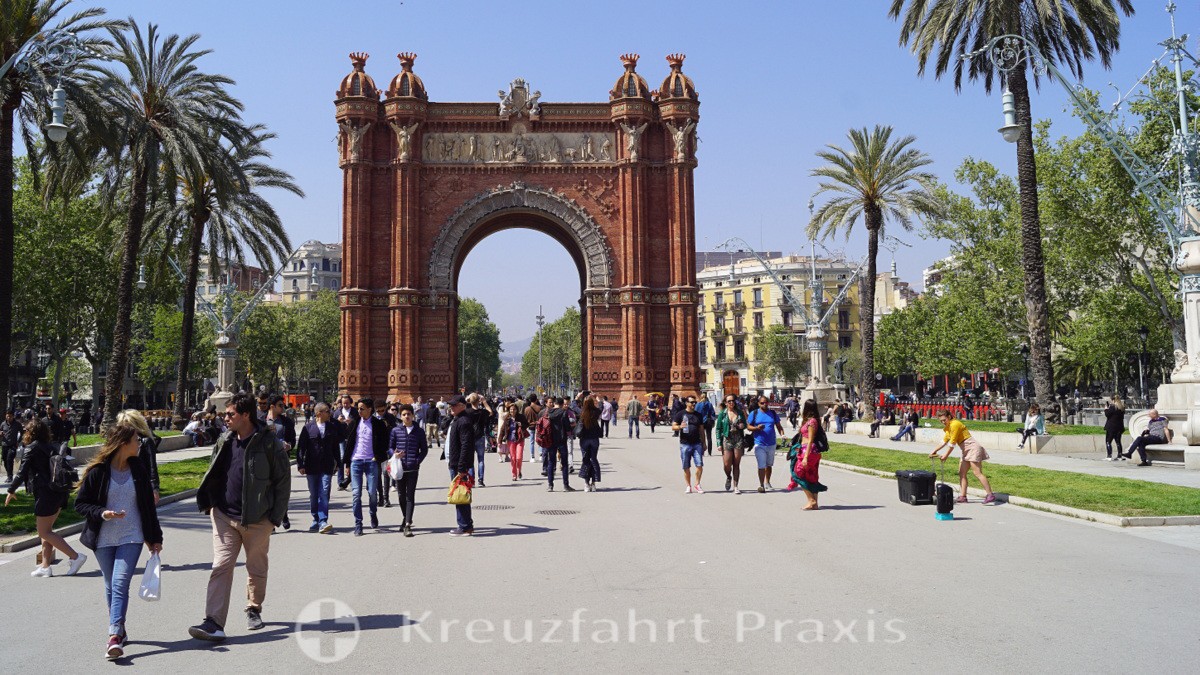 A few hundred meters separate the triumphal arch from the Parc de la Ciutadella. The park area, which extends over more than 17 hectares, originally occupied the star-shaped citadel of the city of Barcelona. In 1866 the facility was razed. Only a few buildings remained. One of these objects that has been saved over time is the former arsenal. Today the Catalan Parliament meets in the rooms. 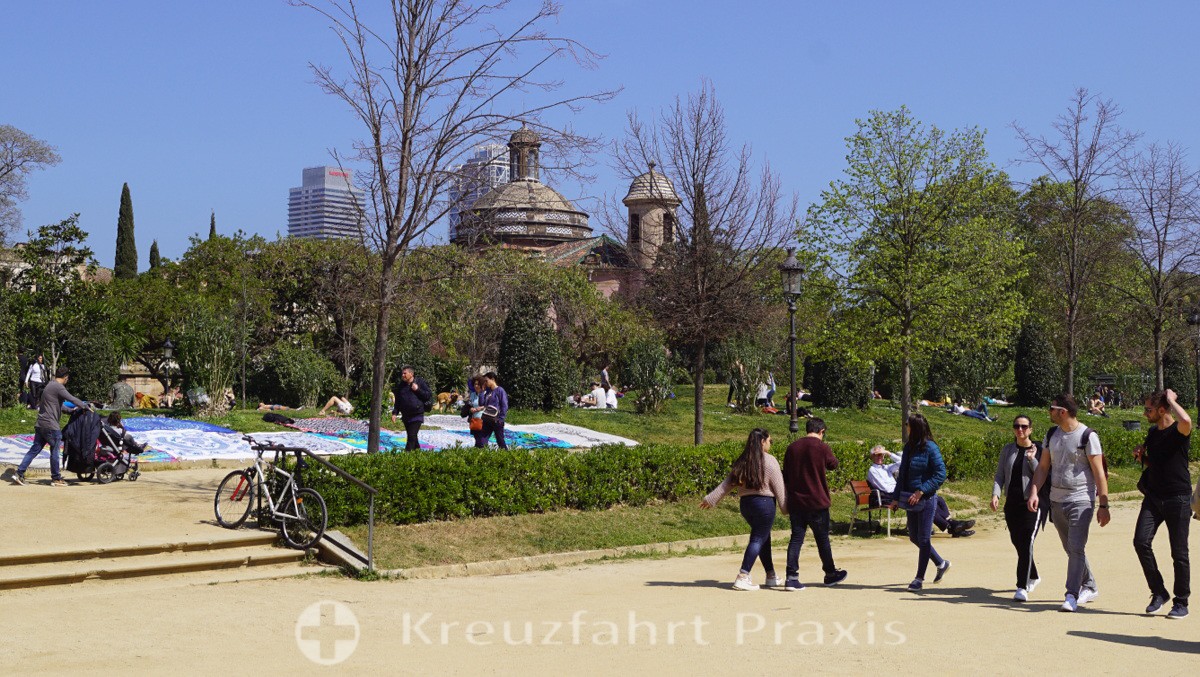 Barcelona's city fathers copied the gardens from the Jardin du Luxembourg in Paris. Large green areas, trees, a lake as well as the fairytale Cascada Fontserè i Mestre make the park a magnet for young and old. The lake in the center of the park is interspersed with islands and is ideal for rowing boat trips. The world exhibition of 1888 took place in the park area.

The archaeological site of El Born

An entire district fell victim to the construction of the Citadel of Barcelona in the early 18th century. Thousands of people lost their homes. Barcelona's citadel was in military use for nearly 150 years. Then it was torn down. On the huge fortress area, today's La Ribera district, the El Born market hall built. It was opened in 1876. 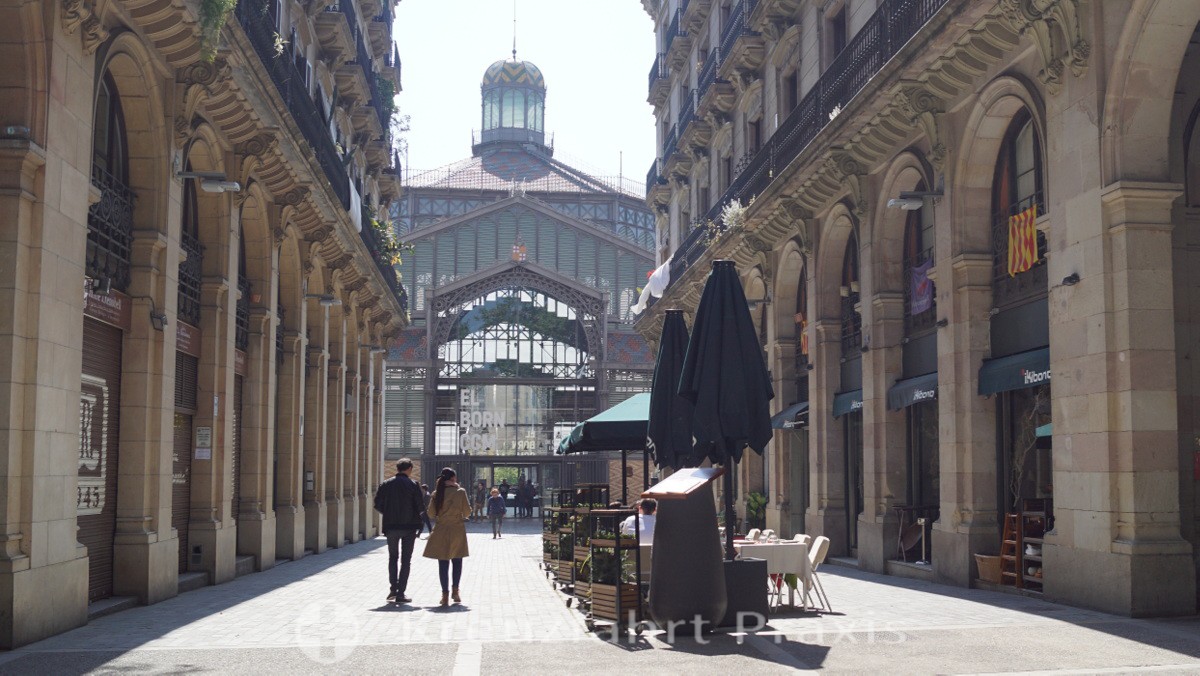 Passatge Mercantil - in the background the El Born market hall

A few years ago, during restoration work on the market hall, remains of the old Ciutat Vella district came to light below the hall floor. El Born has been designated an archaeological site and the excavation site has been classified as an Asset of National Interest. The excavations show a total of 42 houses and some house fragments. They represent three percent of the area of ​​the demolished district.

Back to the port

The way back to the port leads past the Basilia de Santa Maria del Mar using the Paseo de Born. Other streets follow. The path is almost straight to the Rambla. There is the striking Columbus column near the port. We're almost there. Separated by a harbor basin, this is a lure Maremagnum Shopping Center. There is no time for that. There are still a few meters to the shuttle bus that takes us back to the cruise terminal.