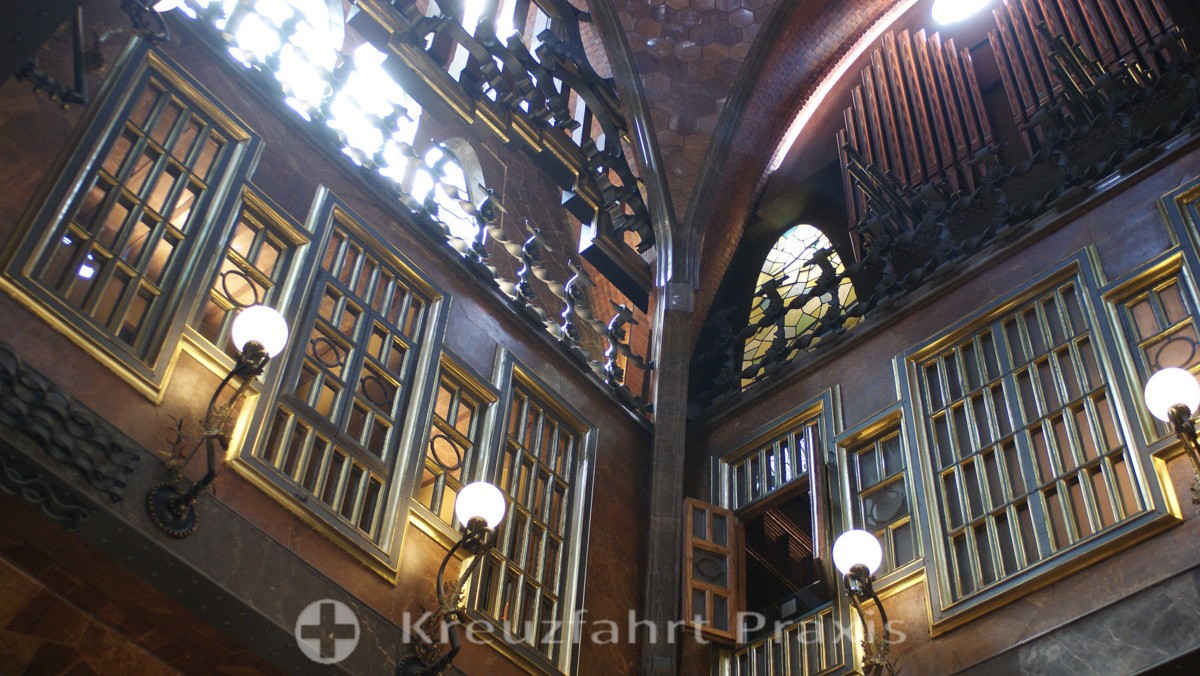 In the footsteps of Antoni Gaudi 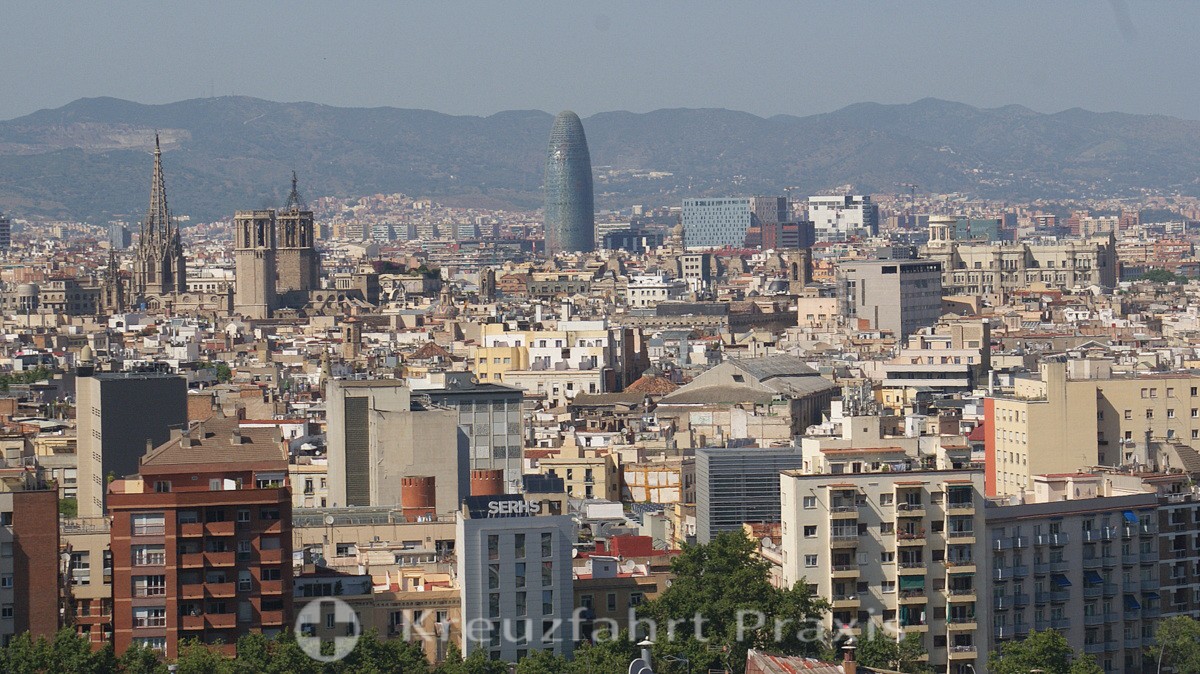 The Modernism is the Catalan variant of Art Nouveau founded at the end of the 19th century. Generously supported by patrons, the modern architectural style was able to develop unchecked. There are still more than 2.000 Art Nouveau buildings in Barcelona. Famous architects of modernism are Lluis Domènech i Montaner, who created the Palau de la Música Catalana, or Josep Puig i Cadafalch. But the most important, ingenious and creative of all was the Catalan Antoni Gaudí.

Gaudí's work only shoots itself to the viewer by looking intensively. All of his buildings take a lot of time and admiration. Sufficient time is something we cruise tourists rarely have. After all, our cruise ship is lying there, it's the one Celebrity Reflection, In early June 2017 overnight in Barcelona. We use the time to visit three of the exemplary works of the master during the day Palau Güell, which Sagrada Familia basilica in the human body and facts about the Park Güell. 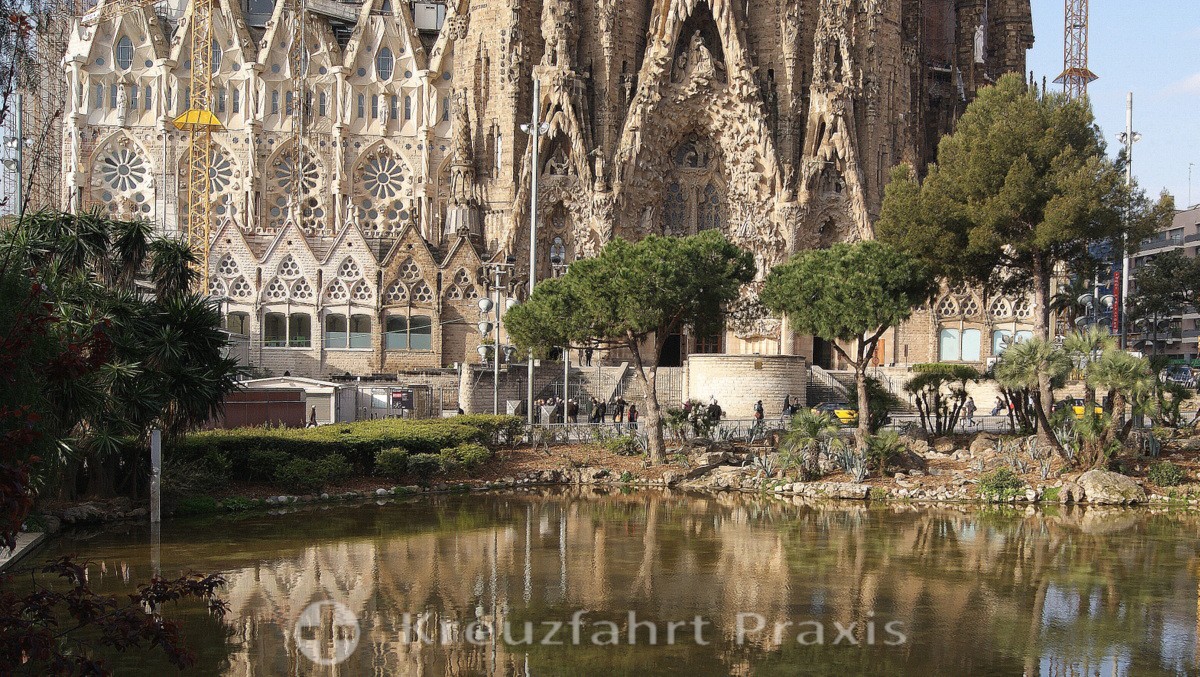 Gaudí's most famous building is the Sagrada Familia basilica in the Eixample district. In 1883, the then still young architect took over the planning of the church. In addition, he was involved in the design of secular buildings. It was only from 1912 until his death in 1926 that he devoted himself almost exclusively to the Sagrada Familia.

Gaudí's patron was the wealthy industrialist and patron Eusebi Güell. The Palau Güell was built between 1886 and 1889 and between 1900 and 1914 Gaudí was involved in the Parque Güell. 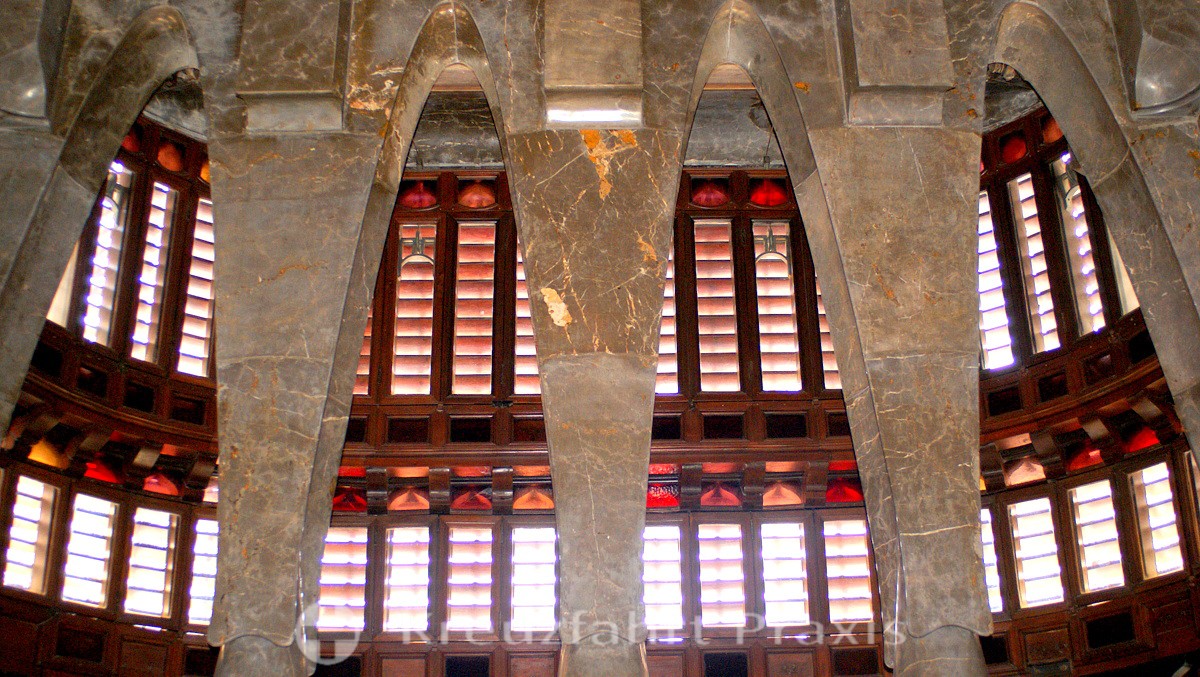 At the Palau Güell

The lordly city palace is one of those buildings with which Barcelona's wealthy upper middle class sought to stand out from the nobility in the city's heyday. The Palau Güell is the epitome of Catalan Art Nouveau, and it was one of Antoni Gaudí's first great works.

It was built in Barcelona's historic city center, Ciutat Vella. Only 18 by 22 meters were available as a base area. This presupposed that the necessary usable space as well as the living and state rooms had to be efficiently arranged in such a limited space. 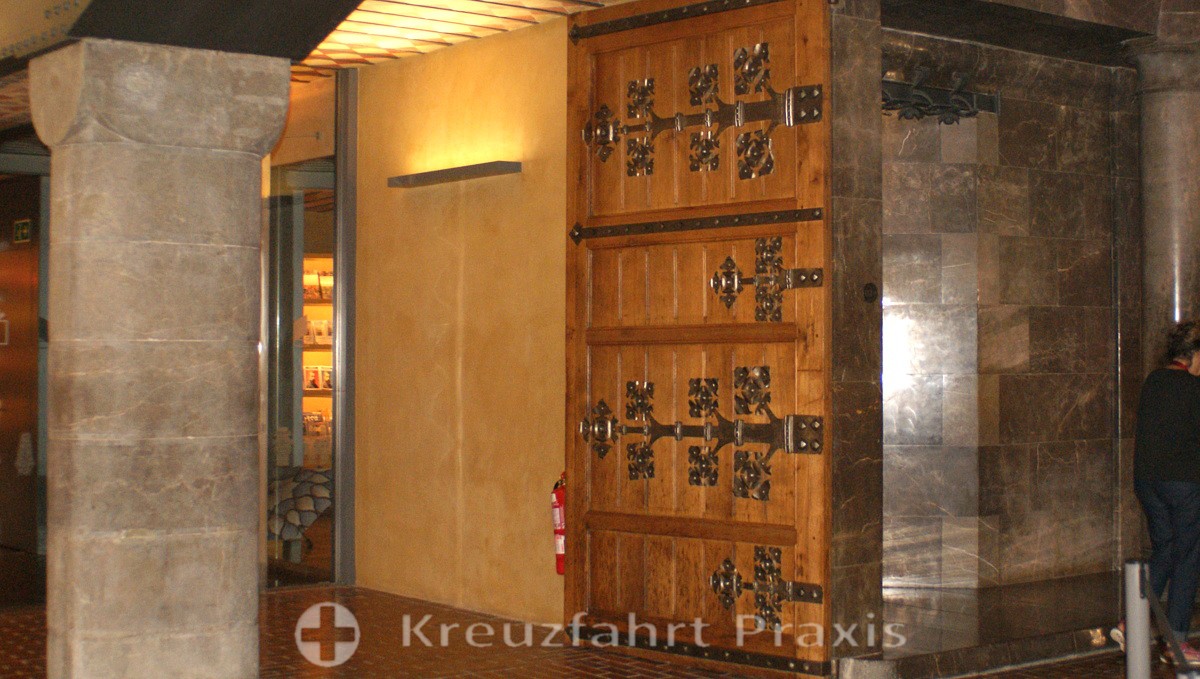 Entrance to the Palau Güell

A wide staircase leads to the mezzanine floor. The residents and their guests reached the “Beletage” via another staircase. It consisted of two salons, the dining room, a billiard room and more. The mezzanine above served as a stage for musicians. This was followed by a floor with the family bedrooms and bathrooms. Above were the servants' rooms and the accessible roof level. The artfully designed exhaust air shafts are remarkable. They replace air conditioning. The terrace also offers good views of the city.

The construction work lasted four years. During this time, Gaudí not only created a 17 meter high salon for the bel étage, but also implemented new concepts for understanding space and integrating light into the architecture. Materials such as glass, wood, ceramics, wrought iron and stone were combined in an inimitable way. The Palau Güell has been a UNESCO World Heritage Site since 1984.

Location: Carrer Nou de la Rambla 3 - 5
- Cruise ship guests take the shuttle bus from the cruise ship berths to the Drassanes terminal. On your short walk you will then pass the Naval Museum and the Columbus Column. Then you are on the Rambla. After four blocks, the Nou de la Rambla branches off to the left. The Palau Güell is on the left side of the street.
- Entrance fees: Regular 12 euros; reduced tickets for 9 euros.

The bookseller José Maria Bocabella had the idea of ​​building a church in Barcelona dedicated to the “Sagrada Familia”, the Holy Family. As chairman of the “Holy Brotherhood”, Señor Bocabella carried out the project. Construction of the crypt began in 1882. But the architect was changed the following year. From then on, Antoni Gaudí took over the planning of the building project. 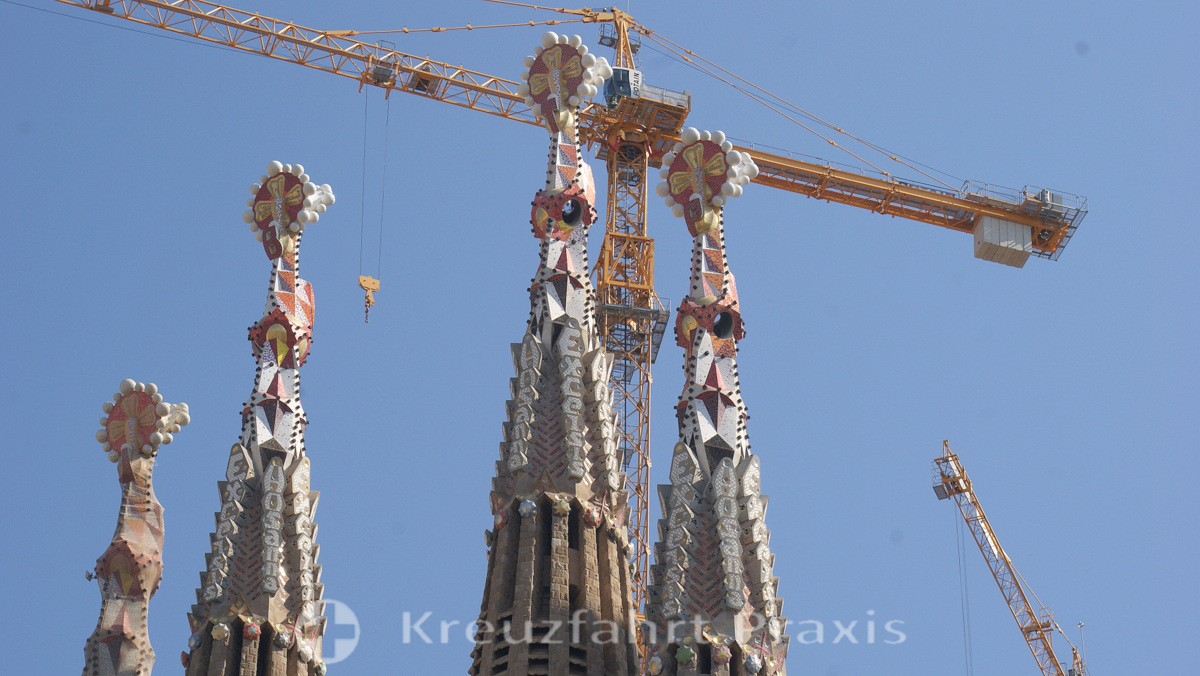 The church currently still presents itself as a construction site. But everything is finite: From a current perspective, work on the Sagrada Familia will end in 144 after 2026 years of construction. That year marks the 100th anniversary of Antoni Gaudí's death.

In November 2010 Pope Benedict XVI consecrated the church and raised it to the minor basilica. Every year around three million people visit the church, which costs around 25 million euros to build. The construction work is financed with relatively high entrance fees (officially: donations). Although the planned, more than 170 meter high crossing tower is still missing, the Sagrada Familia is already on the UNESCO World Heritage List. 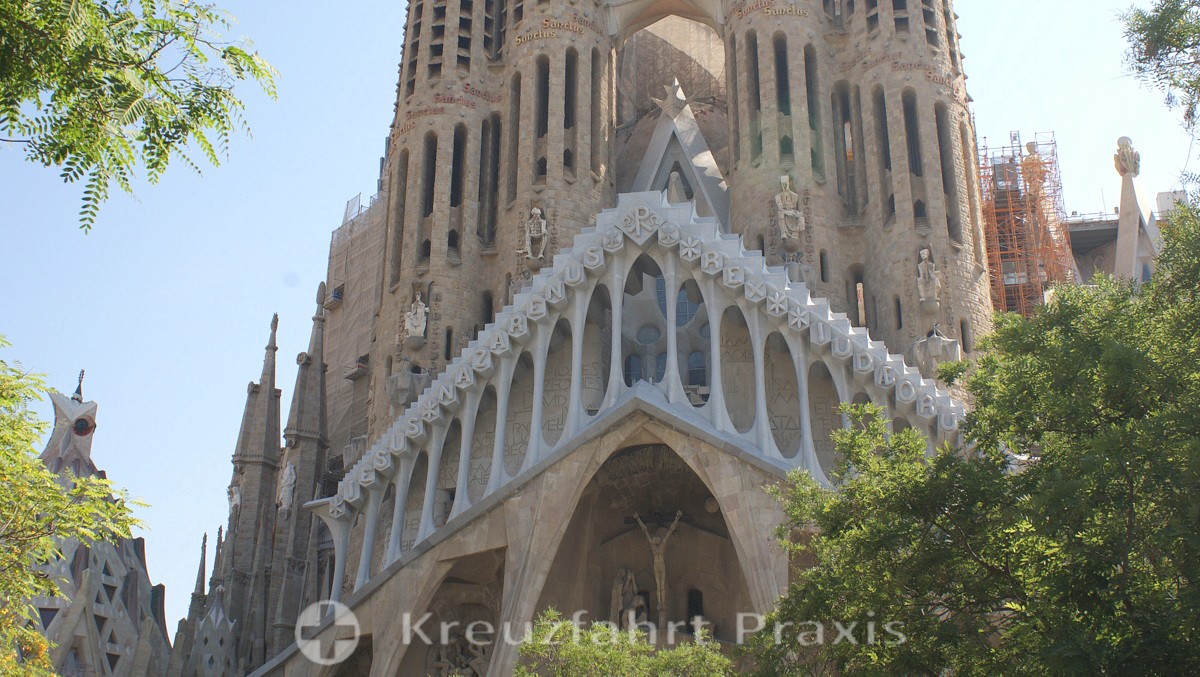 The church is a five-aisled basilica. Its expansive dimensions and the lush design are elusive. The elaborate facades, the towers and the interior of the Sagrada Familia show a multitude of allegories. The east facade dedicated to the birth of Jesus was completed under Gaudí's direction. The later added passion and glory façades are also significant. 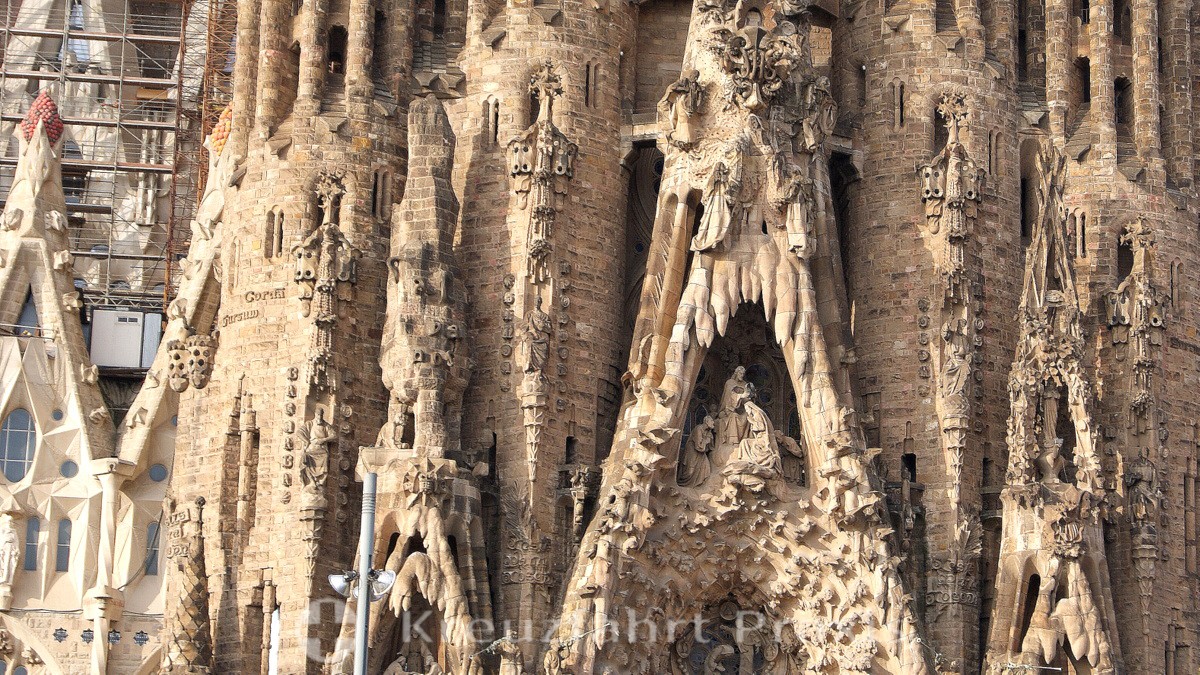 The interior of the basilica was designed by Gaudí as a forest. Tree-shaped columns reach heights of 15 meters in the choir rooms and 75 meters in the apse. In the upper area they branch out to take the load of the roof structure.

The lighting conditions in the interior and the cloister incorporated into the building are remarkable. For an additional fee, visitors can go to one of the towers. The imposing basilica museum is located in the basement. It contains drawings, old photographs, materials and the workshop for the model designs. When working on the samples, Gaudí's methodology and working method are still used today. 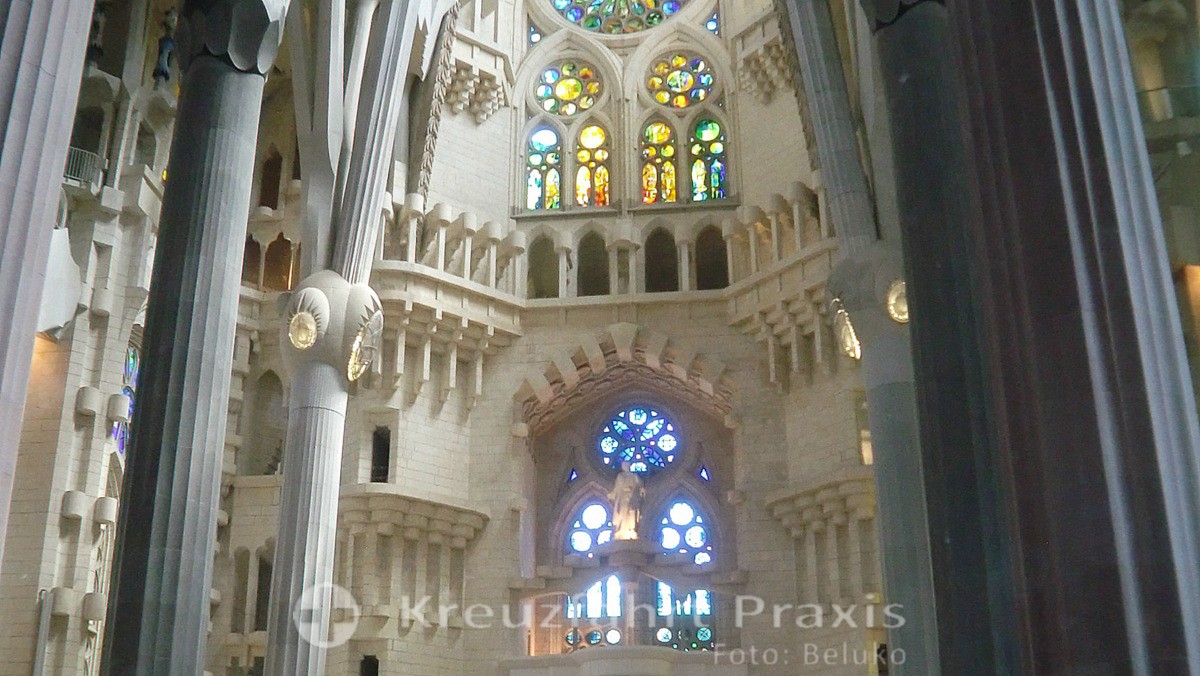 Location: Carrer de Mallorca
- Entrance fees: The prices vary depending on the scope of the tour content. In the pre-sale in 2020, prices for adults between 20 and more than 60 euros will be required. Reductions are granted for certain age groups.
- It is strongly recommended to buy a ticket online for a fixed visit. Waiting times are almost completely eliminated. Visitors without an appointment prepare for long waiting times at the ticket counters.

The industrialist Eusebi Güell, for whom Gaudí first planned the Palau Güell, wanted to build a garden city with 60 villas on a ridge in the north of Barcelona. Güell commissioned Antoni Gaudí with the overall planning. Unfortunately, there were not enough buyers for the project. It failed. Instead, Gaudí remained famous for creating beautiful gardens that have been used as a public park for many years. 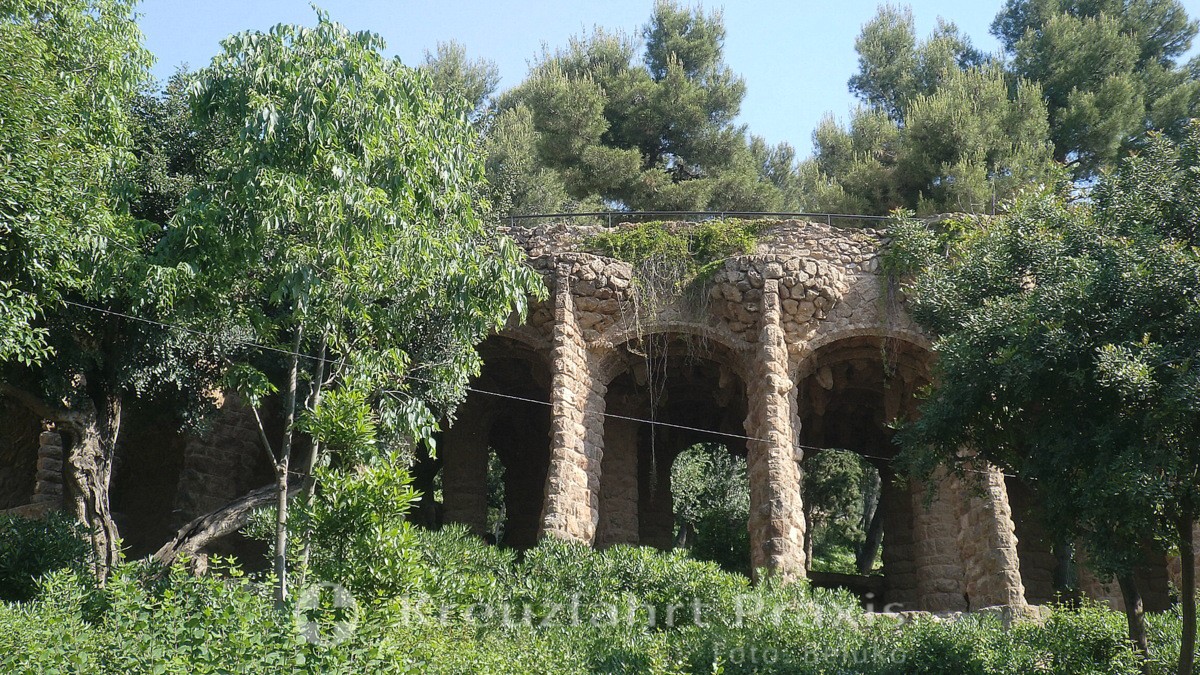 More than 90 percent of the extensive, fairytale-like green space can be visited at no cost. Only the “monumental zone”, including the entrance area with the friendly “kite” or the curved park bench designed with broken ceramics above the market or columned hall, requires entry. The bottleneck is the limited number of visitors. A maximum of 400 visitors are allowed into the monumental zone every half hour. Online booking is therefore recommended. It goes without saying that Parque Güell is also a UNESCO World Heritage Site.

Location: Main entrance Carrer de Larrard
- For the short distance between the Sagrada Familia and Parque Güell, you can take a taxi.
- Buses go back to Plaça de Catalunya. The stops below the park at Carretera del Carmel No. 18th
- Entrance fees for the monumental zone: regular 10 euros; Discounts are granted (online prices).
- Below the Parque Güell is the Gaudí Museum.

There is no longer enough time for two more Gaudí buildings on the posh boulevard Passeig de Gràcia. We will the Casa Batllo and the Casa Mila, both are of course UNESCO World Heritage Sites, visit on a different day. That alone is a reason to travel to Barcelona again.