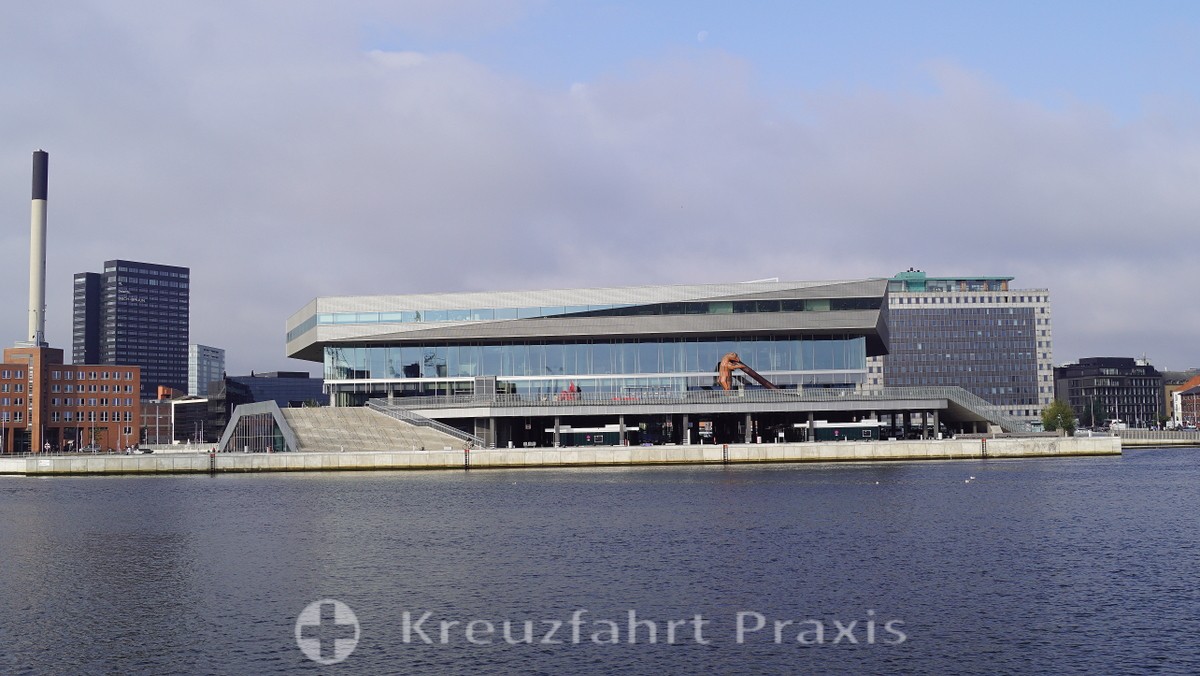 Aarhus, Denmark's second largest city, is in east Jutland. The settlement founded by Vikings on Århus Bay has 350.000 inhabitants, including the surrounding communities. Aarhus is the economic center of Jutland, a transport hub as well as a port and university city. In 2017, the city, together with Paphos in Cyprus, had the title of "European Capital of Culture". 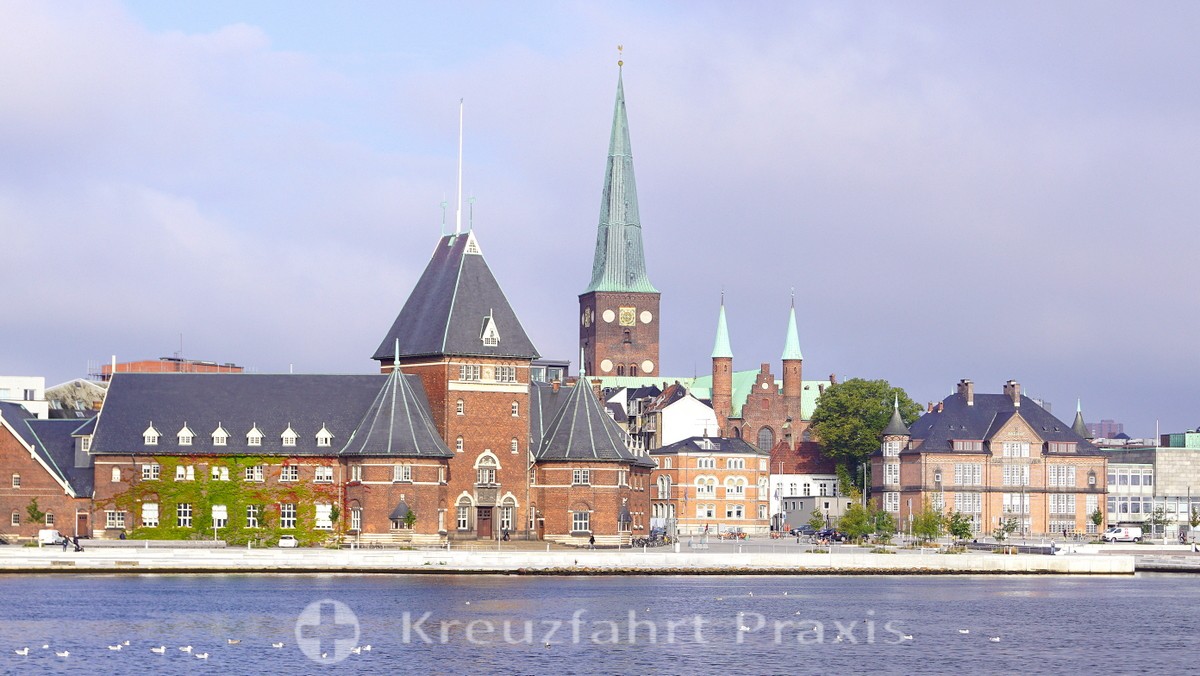 Aarhus seen from the cruise terminal

Vikings founded the settlement at the mouth of the Aarhus Å around 770 AD. Since then, the region has been continuously inhabited, and the town is said to have been a bishopric as early as 948.

In the centuries that followed, Aarhus became a maritime trading town of regional importance. However, Aarhus did not come close to Copenhagen, Flensburg or Altona, all of which were Danish cities at that time. The construction of roads and railways in the 19th and 20th centuries made the city a traffic junction and the largest city in Jutland. 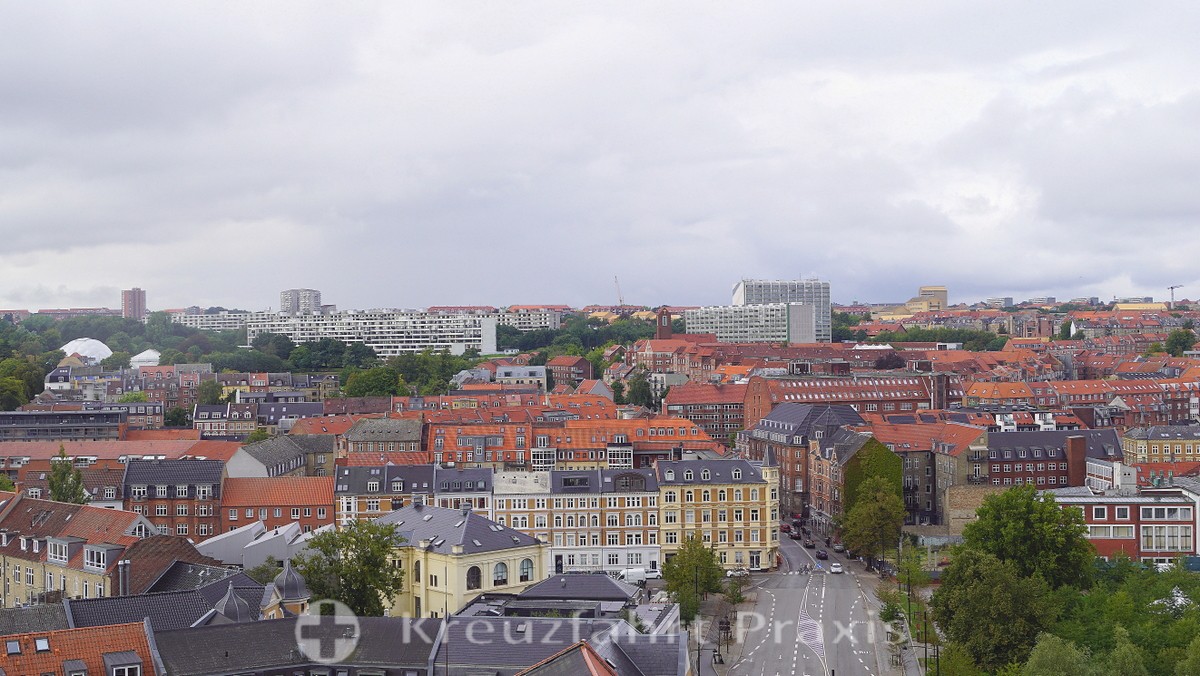 For centuries the city name "Århus" was written. Since 2011 the new spelling “Aarhus” has also applied. The city councilors took the view that the new spelling could be written on all Latin-based keyboards without any problems.

Aarhus is one of the most important Danish ports in terms of handling figures. The port is Denmark's leader in handling containers and bulk goods. Around 60 percent of Danish container handling goes through the port. Aarhus is also a ferry port. Around 800.000 vehicles and two million passengers are handled there every year. From the "Infinite Bro“, It is one of the sights of the city, the extensive port facilities are easy to see. 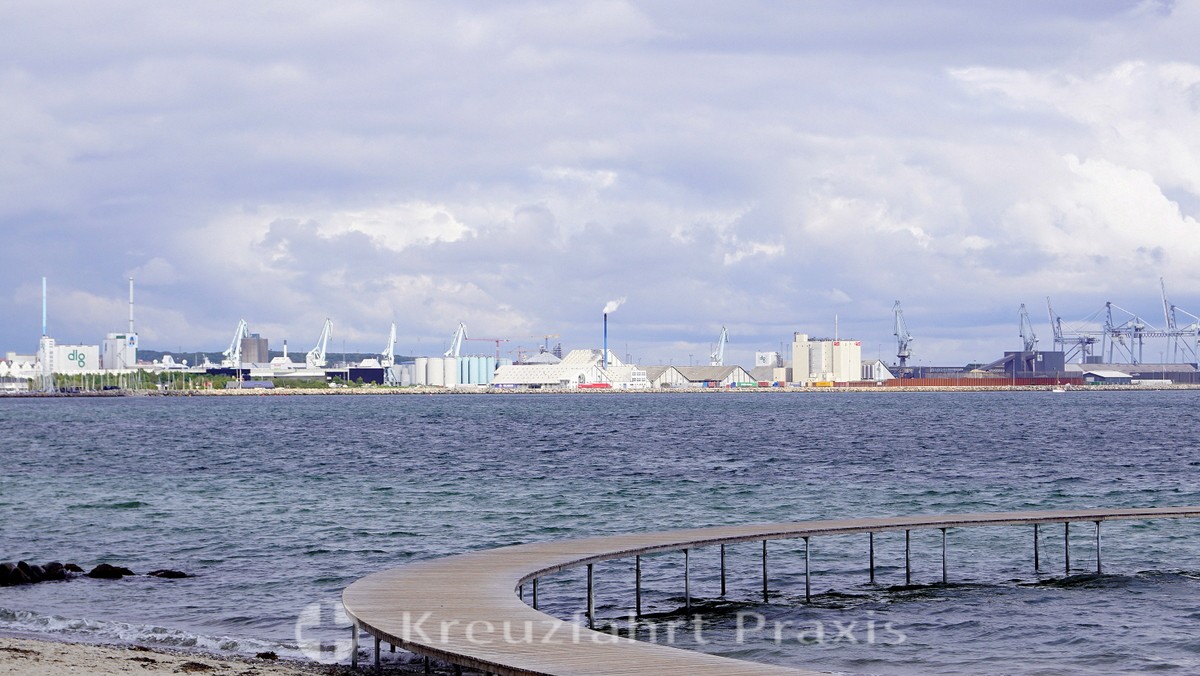 The city is not just a port city. It is also an important industrial and media location. The largest Danish daily newspaper, Jyllands-Posten, is based in Aarhus.

With the university, the commercial college, the architecture school, the state college of music and the drama and drama school, the city is one of Denmark's cultural beacons. Around 40.000 students are enrolled at the institutions mentioned. With so much teaching and culture, the EU Council of Ministers could not avoid awarding Aarhus the title of “European Capital of Culture” for 2017. 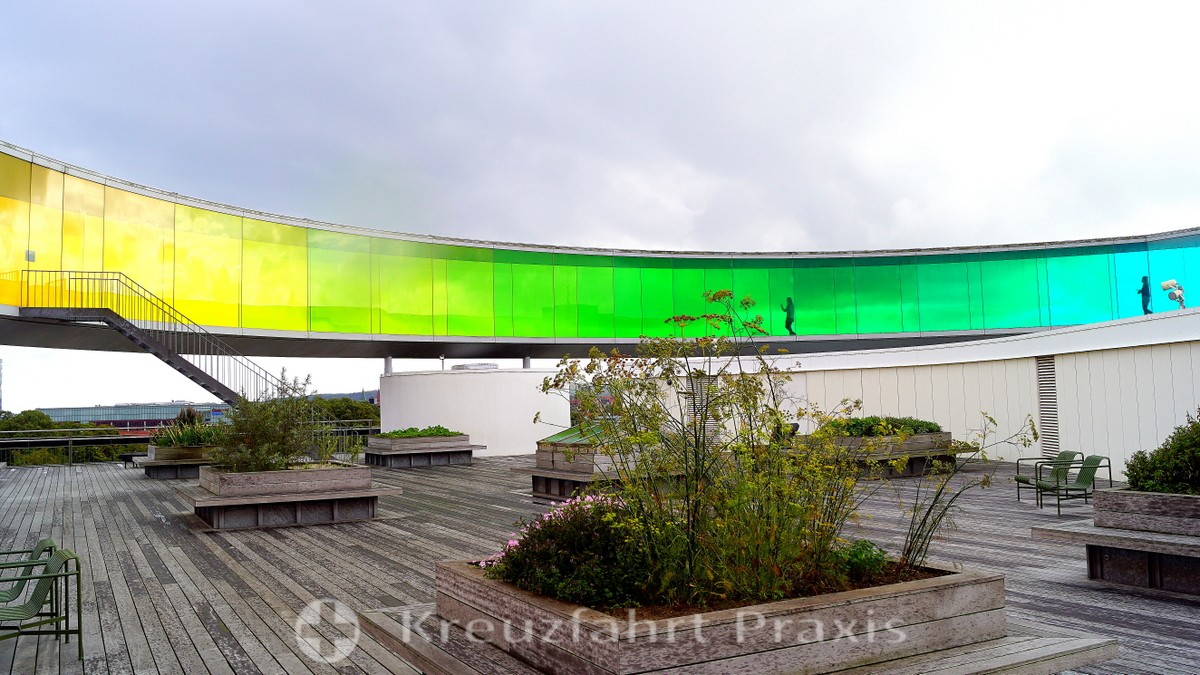 The rainbow of the ARoS art museum

Aarhus at a glance

The city looks clean and tidy. The guest meets young people everywhere. The gastronomy scene along the Aboulevard also stands up to international comparison. On the outskirts, Aarhus is surrounded by water and greenery. 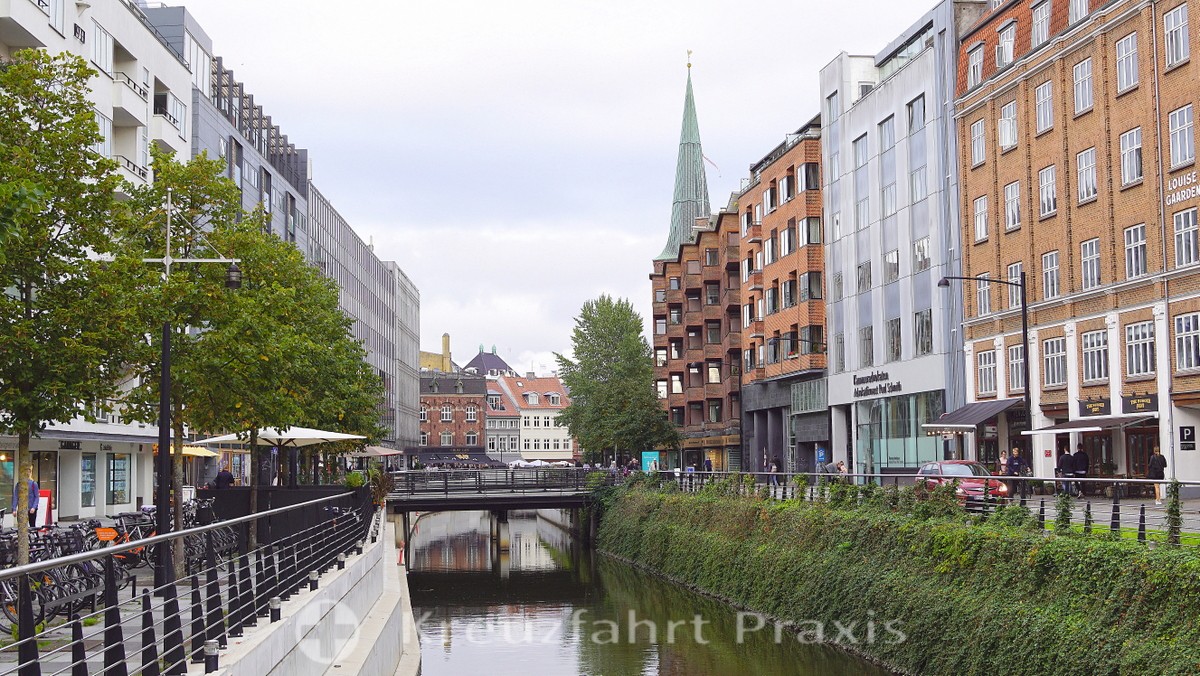 In the city center, on the other hand, little remains of the old building fabric. The buildings appear mostly modern, practical and good. However, the tourist highlights that we present under Aarhus sights should be emphasized.

Aarhus - a cruise destination in development

Between 2017 and 2019 cruise ships called at Aarhus in 30 and 40. The cruise terminal is located at Bassin 4 across from the multifunctional building of DOKK 1. 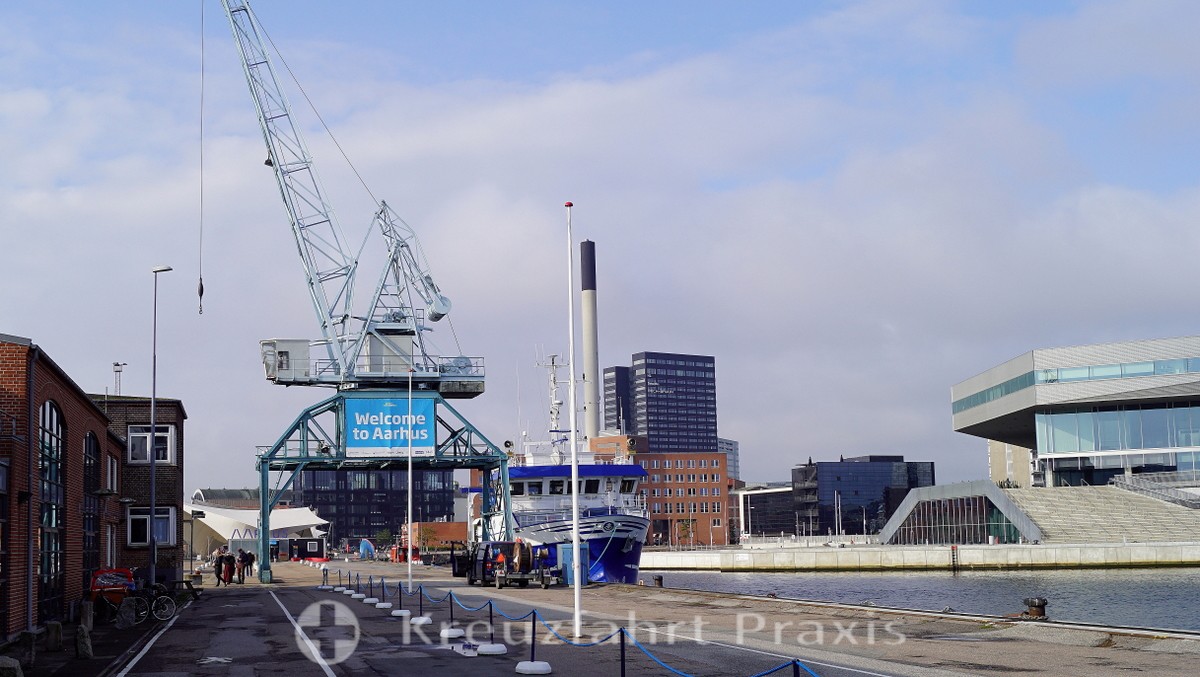 Aarhus is a definitely worth seeing cruise destination with a number of interesting destinations, which we are under Aarhus sightseeing elaborate. From the berth of the cruise ship there is a convenient route to the city center. When a ship calls, volunteers are available at the port exit to inform the guests. It only takes a quarter of an hour to walk to the center. The city is ideal for exploring on foot and by public transport. Buses and trams are well organized and coordinated. Aarhus has significant development potential as a cruise destination.